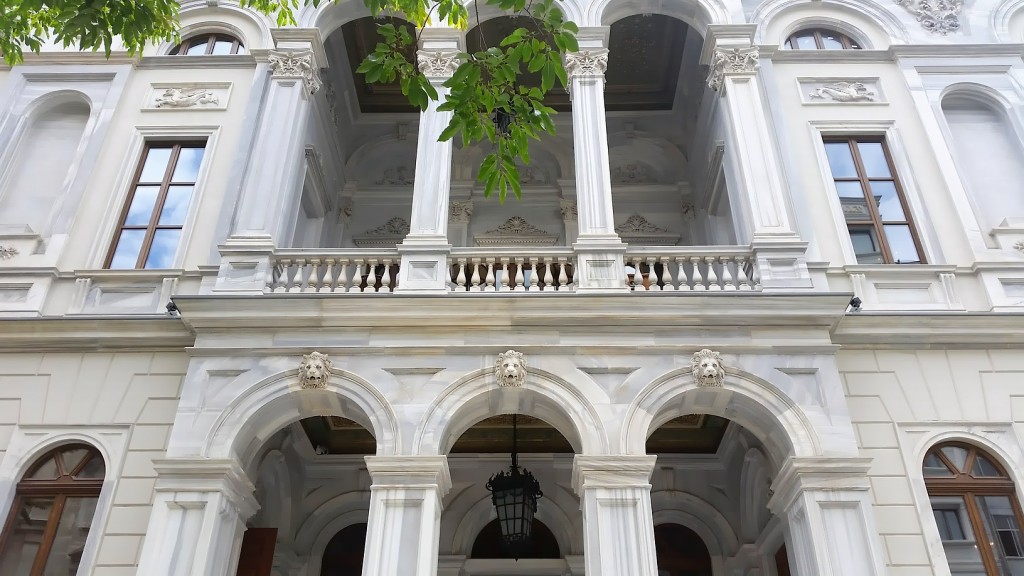 The Soho House with its white, neoclassical marble facade is chaped by circular arches and Corinthian columns

It’s like a fairy tale from 1000 and one nights, as if Scheherazade would tell her Sultan the story of the rich, Italian businessman Ignazio Corpi, who, in 1873, settled in what was then Constantinople. The successful shipbuilder from Genoa commissioned the architect Giacomo, Leoni , who built a splendid villa for Corpi and his family – the Palazzo Corpi. Soon Corpi, a charmer and womanizer, started an affair with the maid, who however took a bad ending: the young woman fell down the stairs of the magnificent staircase and died – under mysterious circumstances. 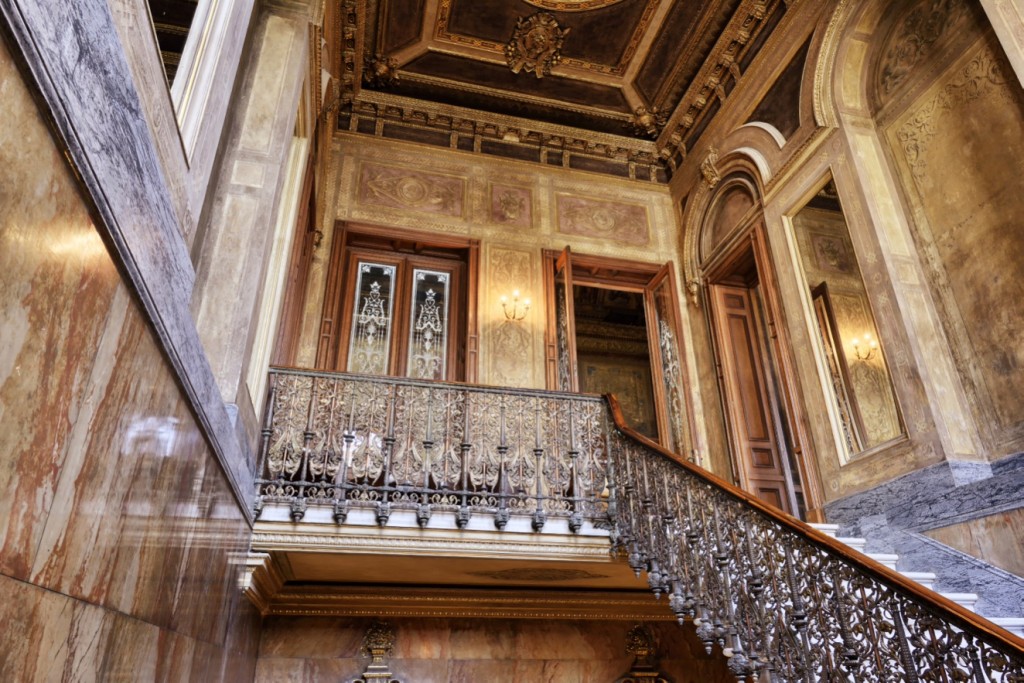 Staircase a with history and magnificent details

Corpi, whose family resided in the Palazzo for 40 years, wisely chose the Pera district in Beyoğlu, which was regarded as the European Quarter. Even today there are magnificent buildings of its European builders. Pera reflects, with its many small cafes, shops and galleries, the vibrant life of the city and has thrilled me. Istanbul is more than Hagia Sophia, Blue Mosque and Grand Bazaar – which certainly includes a visit to the Bosporus metropolis. 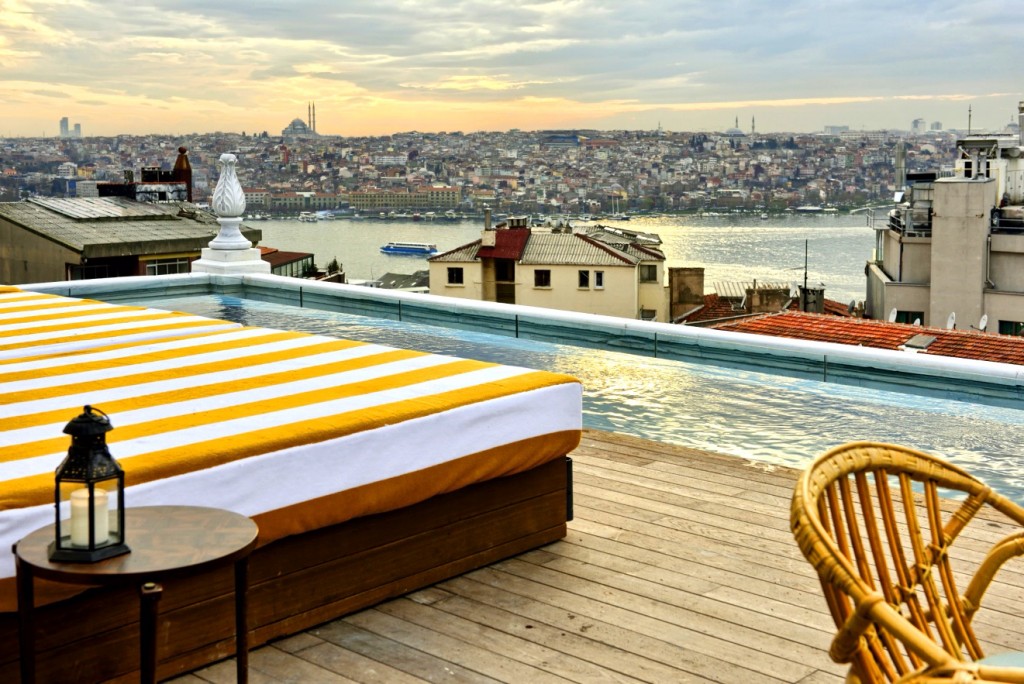 When Nick Jones – the founder of the private member club Soho House – saw the Corpi Palace for the first time, it was love at first sight. From this moment, he had the vision to establish his now 13th Soho House, which rooms can also be booked by non-members. 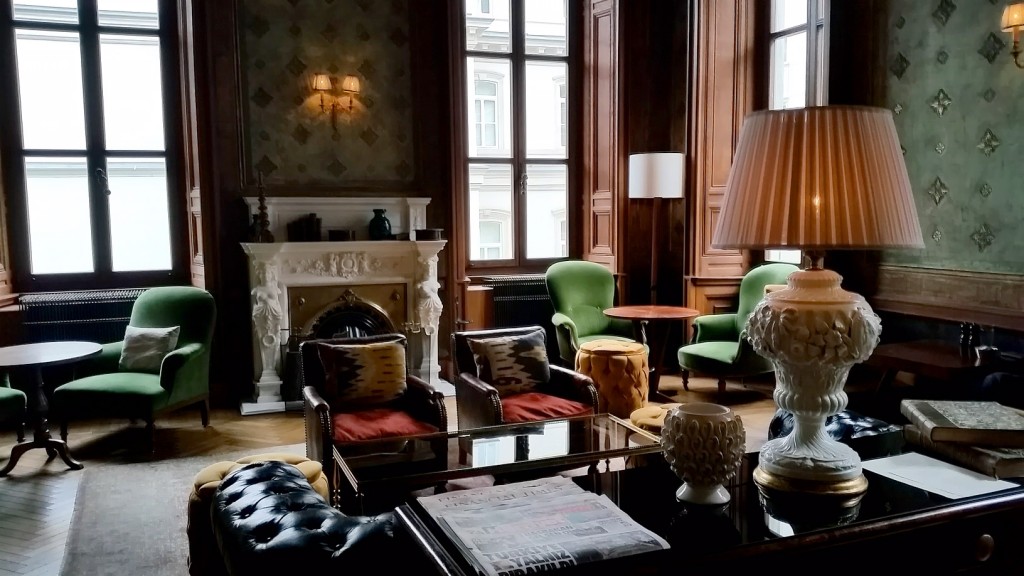 Oops, my camera has probably triggered by itself … at Soho House taking pictures is prohibited. Unfortunately

He carefully renovated the Italian palazzo, which, since 1906, was used as an embassy by the Americans and then as a General Consulate. Jones, the self-made hotelier – who started with a bar in London 20 years ago, dusted facade and interior, let the Carrara glow in a new light, freeing the native of the Piemont wood of doors and window frames of color layers. The wall drawings with their mystical Greek mythology-figures have been restored, as well as the impressive ceiling paneling and frescoes. 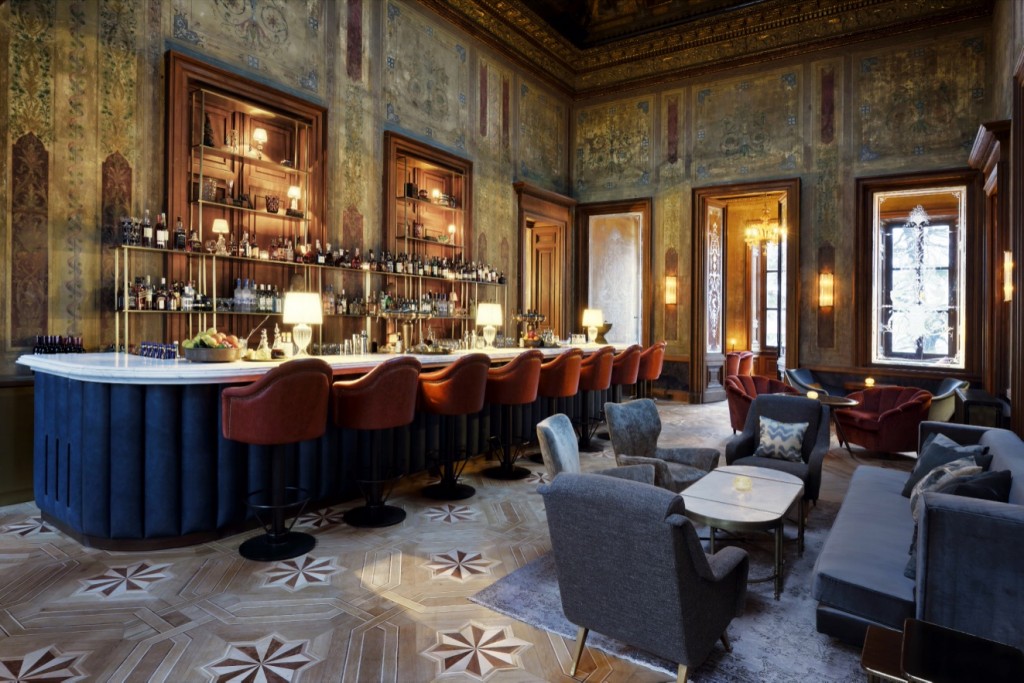 The Palazzo Corpi is by far the most impressive and most extraordinary of all Soho Houses. Here the club life of members and guests plays out on a total of three floors; whether at the bar, the restaurants ‘Mandolin’ and ‘Cecconi’s’ or by the pool on the roof terrace with fantastic views of the opposite Istanbul silhouette and the Bosphorus. Here I could doze all day on one of the daybeds and enjoy the view. 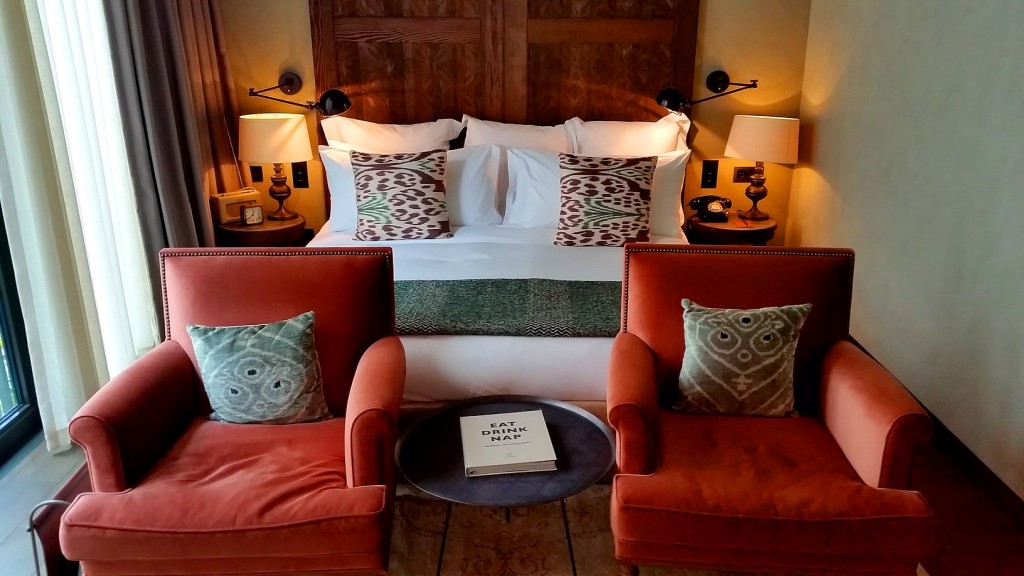 My room: Small but nice

Adding the adjacent building with its glass facade, the whole hotel is housed with 87 rooms, a spa and gym, a bar and , Allis’ – café where you can have amazing breakfast, also outside on the terrace.
The rooms are in a typical Soho House style; with a radio by the bed, books and a large TV. The carpets in the hotel as well as the tiles of the baths are Turkish handcraft. And the big rain showers are stocked with a great selection of ,Cowshed’ shower gels and shampoos – so I could choose a different fragrance every day. 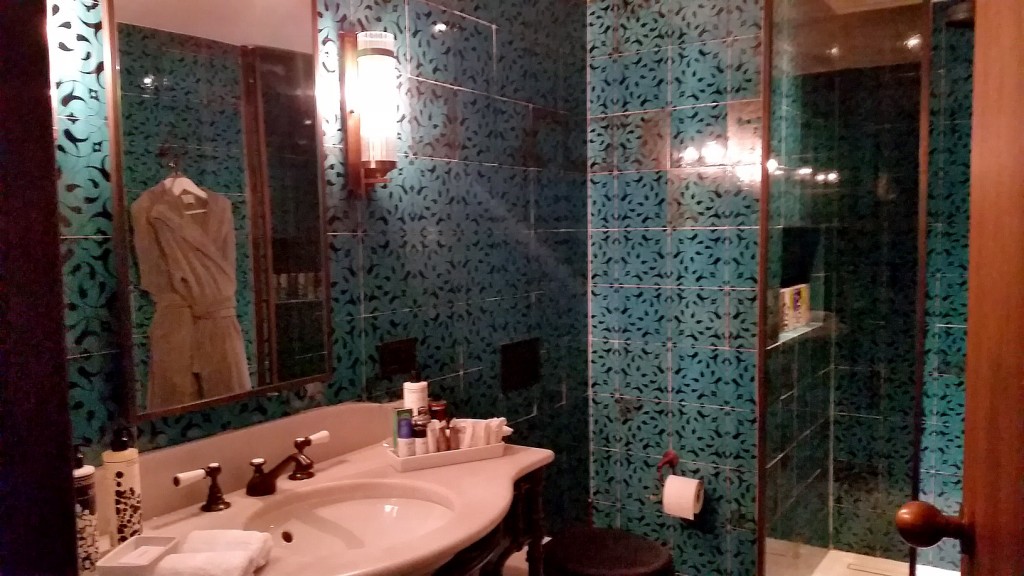 The bathroom with turquoise, Turkish tiles … an extra lamp wouldn’t be unnecessary

A great selection of ,Cowshed’ products 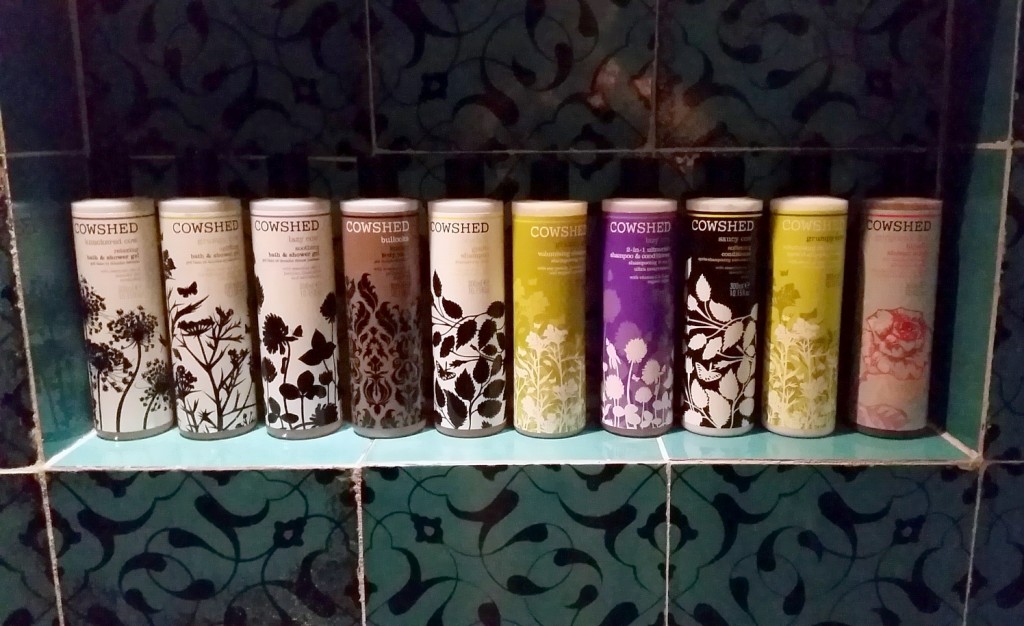 Every day a different scent! I love the Cowshed products

Only the lighting concept at Soho House is a point of criticism: one needs a flashlight in the hallways to fish the room key out of the purse. And in the bathroom one needs a lot of imagination for makeup or shaving. And – at this point I simply have to say: you must not take pictures, in order to respect the privacy of other guests, a Soho House Law, which incomprehensibly also applies for the views from the pool terrace – but by no means this rule is followed by everyone. 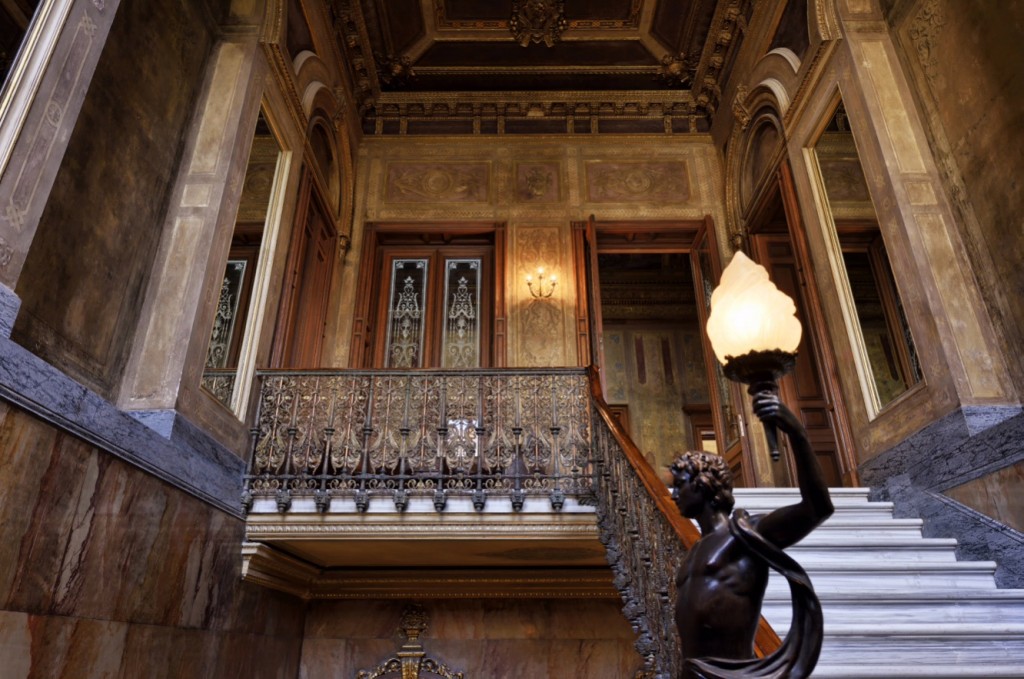 By the way: It is being said that Corpi’s wife was not entirely innocent about the tragic death of her maid. She came behind the Liaison of her husband and pushed her rival, in a jealous rage, down the stairs. Since then – according to legends – the poor soul haunts in the house. Sometimes the bulbs flicker or the light goes out. For no apparent reason. Just because. BvH 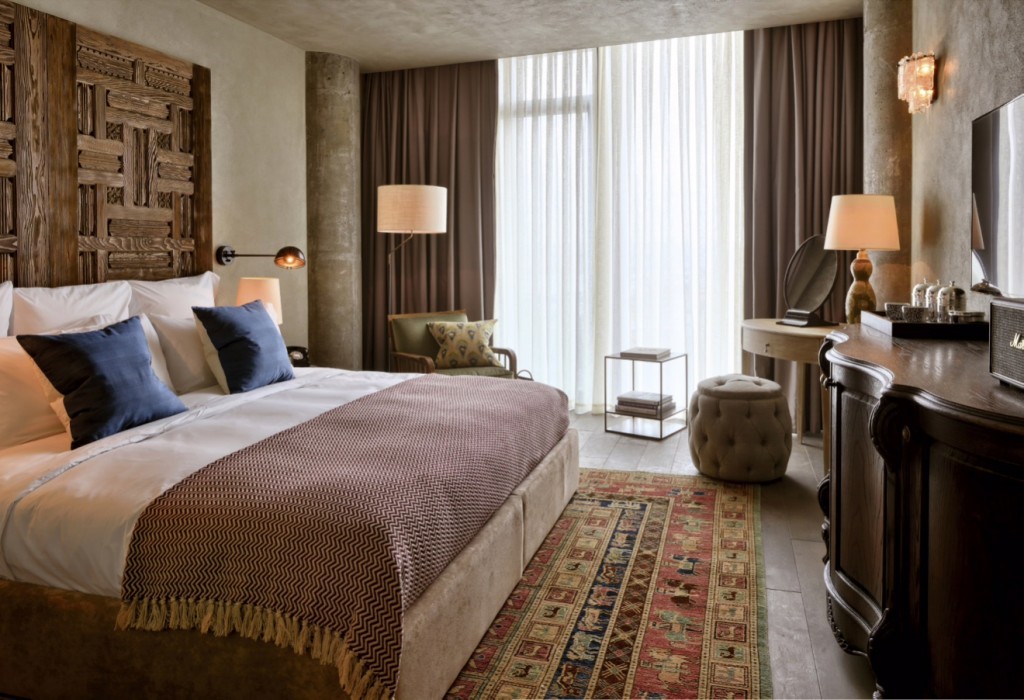 The rooms at the Soho House are equipped with comfortable beds and seating areas. Wood, velvet and brass are used in many of the Soho Houses 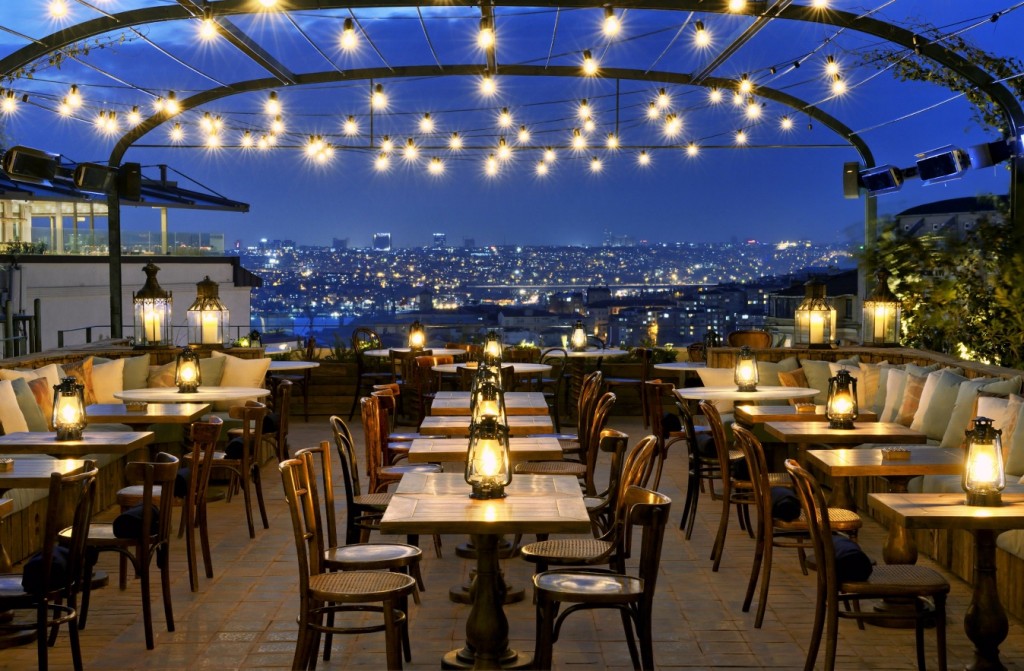 The ‘Mandolin’ terrace: Turkish and European dishes are served all day 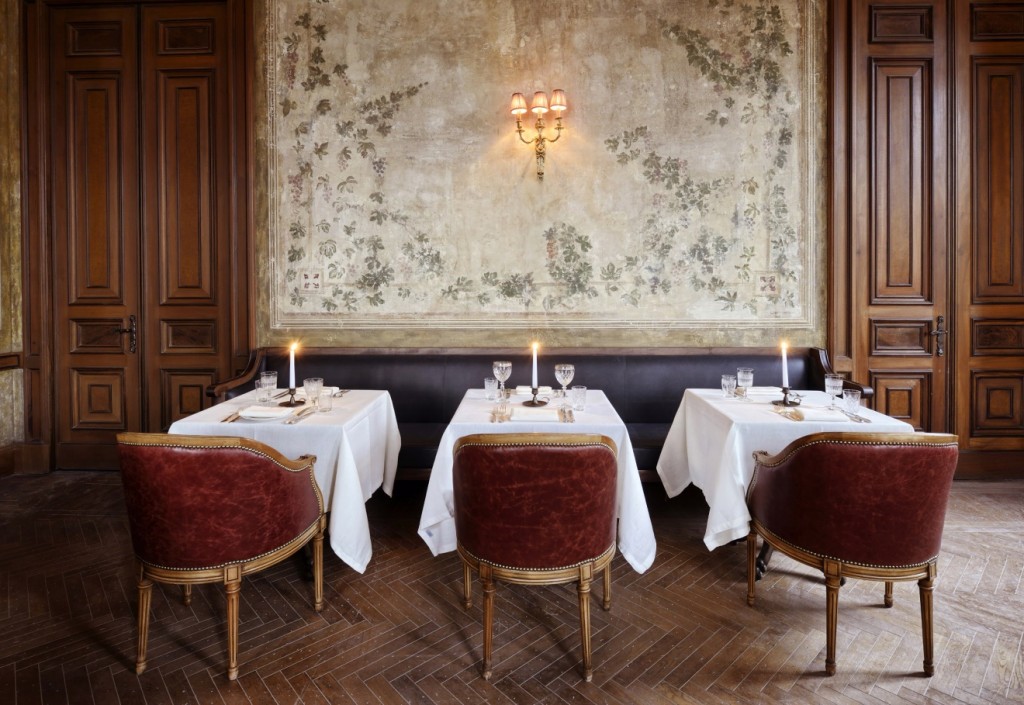 The Dining-Room. The wall drawings are really nice 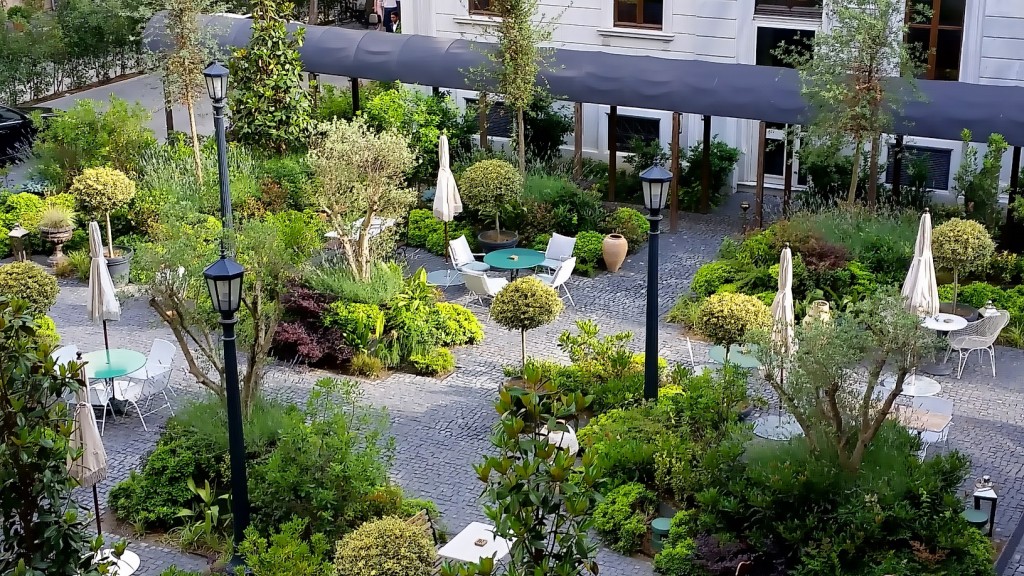 View from my room into the leafy courtyard

Info:
Soho House is a group of private members’ clubs for people working in the creative industries. We have Houses in London, New York, Berlin, Toronto, West Hollywood, Chicago and Miami. Istanbul is our 13th, and there are more in the works.