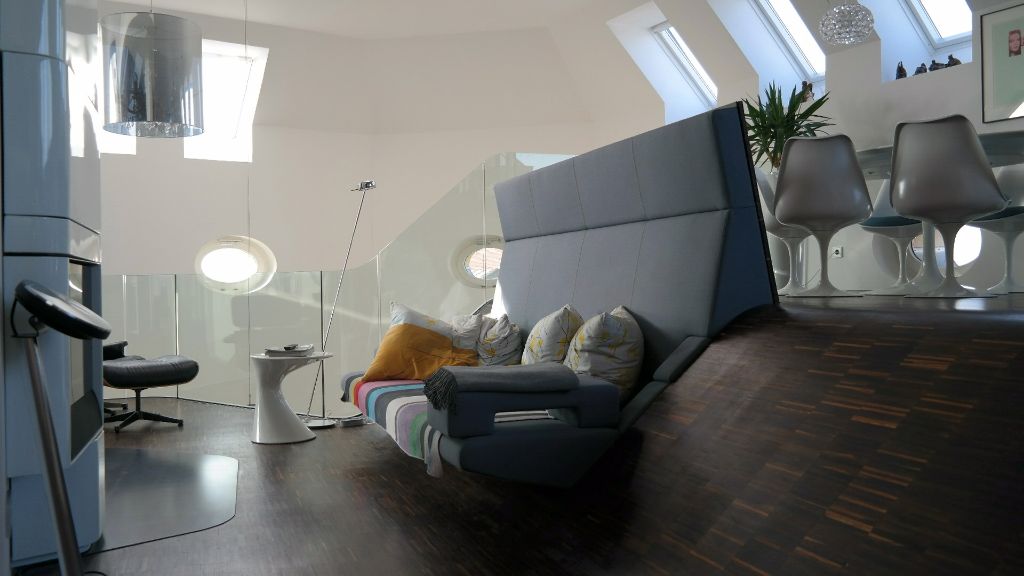 The brown parquet flooring encases the intermingling levels like a skin: Fireplace and retractable bed, above the dining level 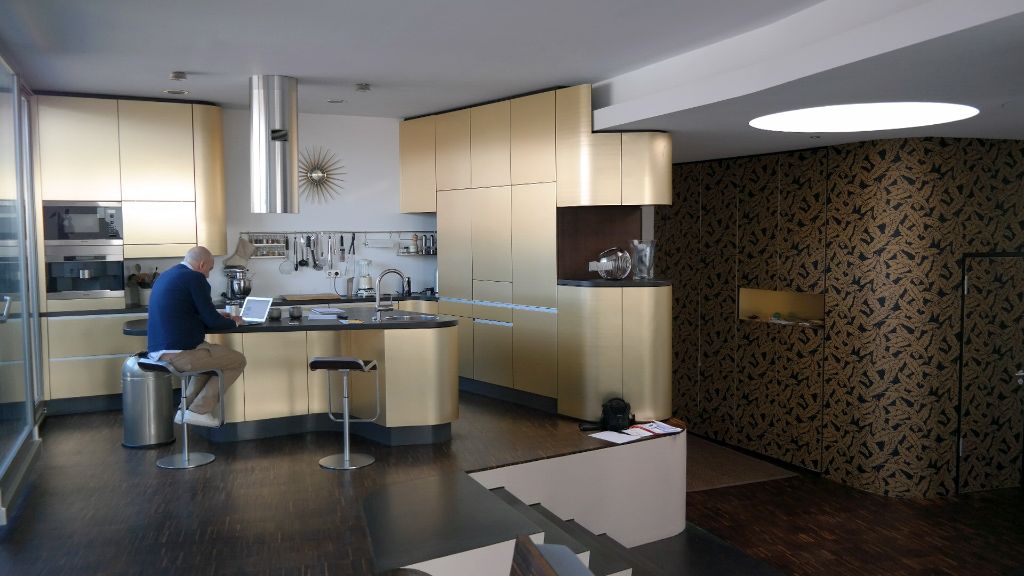 The golden kitchen – in “Byzantium-Gold Metallic” – and the entrée

There are not many people who can be described as cosmopolitan. The advertiser Amir Kassaei certainly can. Born in Teheran, being a 13 years old child soldier, he flew from the Iran-Iraq war in the trunk of a smuggler over Turkey to Austria. He graduated from high school, studied economics in Paris, worked as an advertising writer in Hamburg and then became executive partner of the advertising agency DDB Group (Dane, Doyle, Bernbach), of which he is the CCO worldwide today. Kassaei, who belongs to the three best creative chiefs in the world, won more than 2000 national and international awards. He is married, has four children and lives in New York, Ibiza and Berlin. 2004 – in the middle of Prenzlauer Berg district, the man with the Vienna-accent realized a modern living dream on 265 square meters over two floors in the attic of an old building. 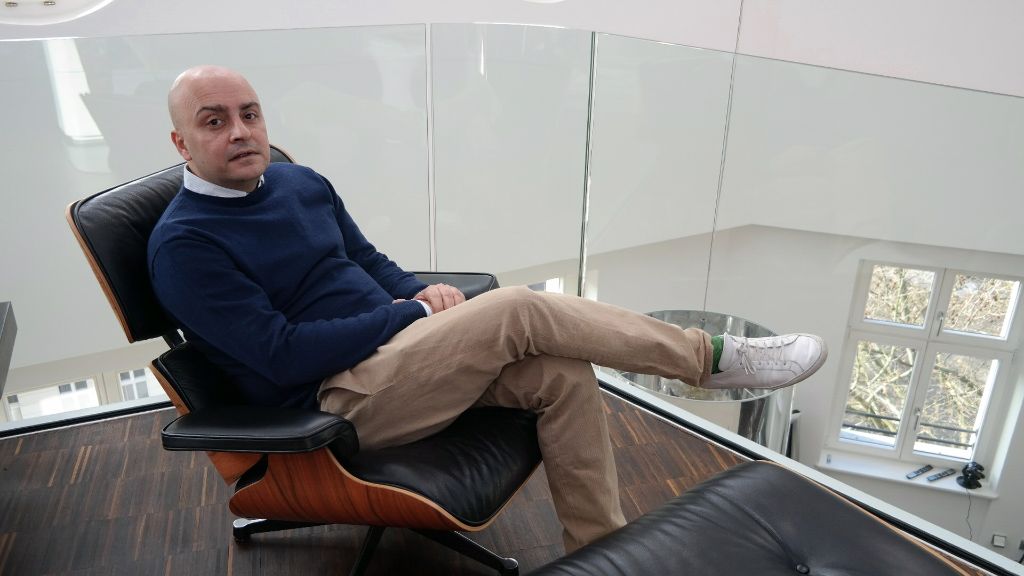 MyStylery: Prenzlauer Berg is the area with the most children in Europe, in which mothers enjoy a reputation of a thundering echo. What made you come here?
Amir Kassaei: My agency DDB had its offices here ten years ago. The hood is still quite cozy, even though not as cornered and edged. And the notorious mothers don’t really bother me (laughs). As a father of four children, to me, the neighborhood conveys the feeling of not being dead yet. 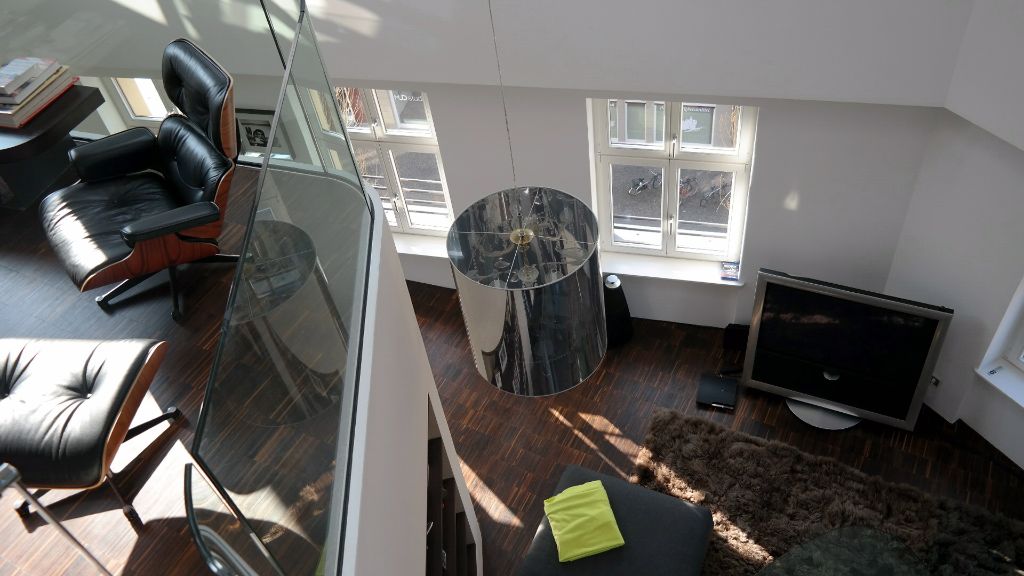 View from the gallery into the lower lounge area

MS: One is surprised, when seeing the Turn-of-the-century house from outside and then entering your flat. An unexpected contrast.
AK: Yes, especially since we weren’t allowed to change anything about the heritage-protected exterior facade. When it came to the flat, it was about not creating a hypermodern concept. The harmony of the forms and colors was important to me and also the idea to connect architecture and interior design from the beginning. I wanted the biggest flexibility. The sofa for example disappears into the floor when pressing a button when no one needs it. 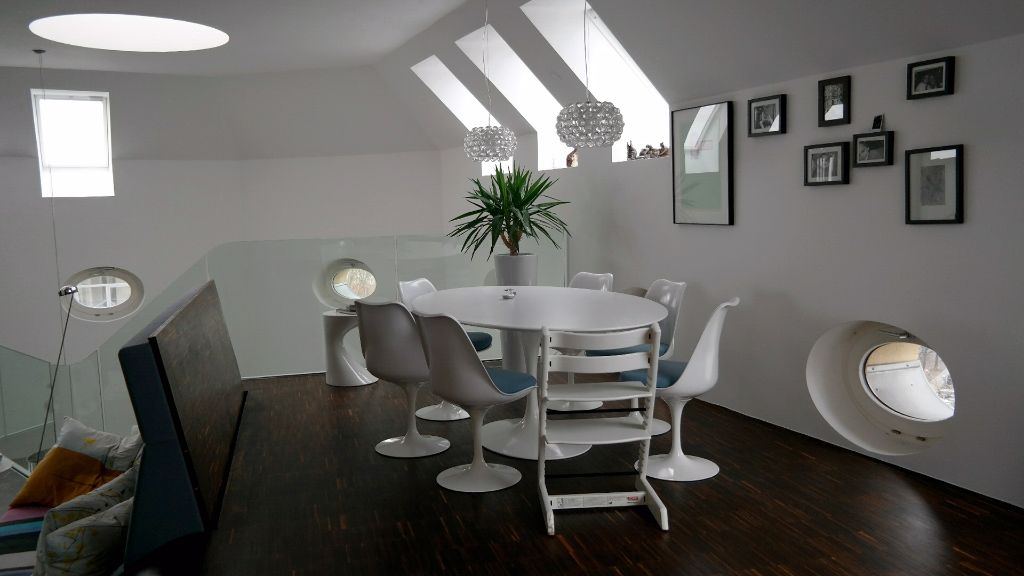 Eero Saarinens “Tulip Chairs” and table from Knoll; in front a “Tripp Trapp” stool for the kids … 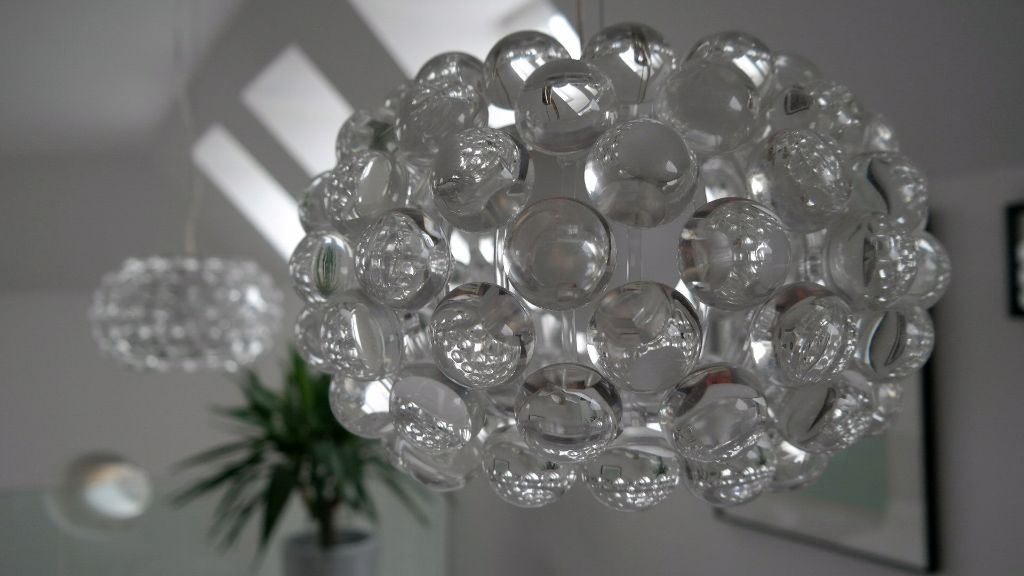 MS: On 265 square meters, there are no separated room surfaces – except for the child’s room. Everything is open and connects to each other. Where is your safe haven?
AK: It just comes about, after all we have eight different levels of action: cooking, eating, sitting, sleeping, working, relaxing, entering and exiting. Variable curtains create rooms and can also open them again. Often big rooms seem like uncomfortable sports halls in which you feel completely lost. I wanted big rooms but with comfort. 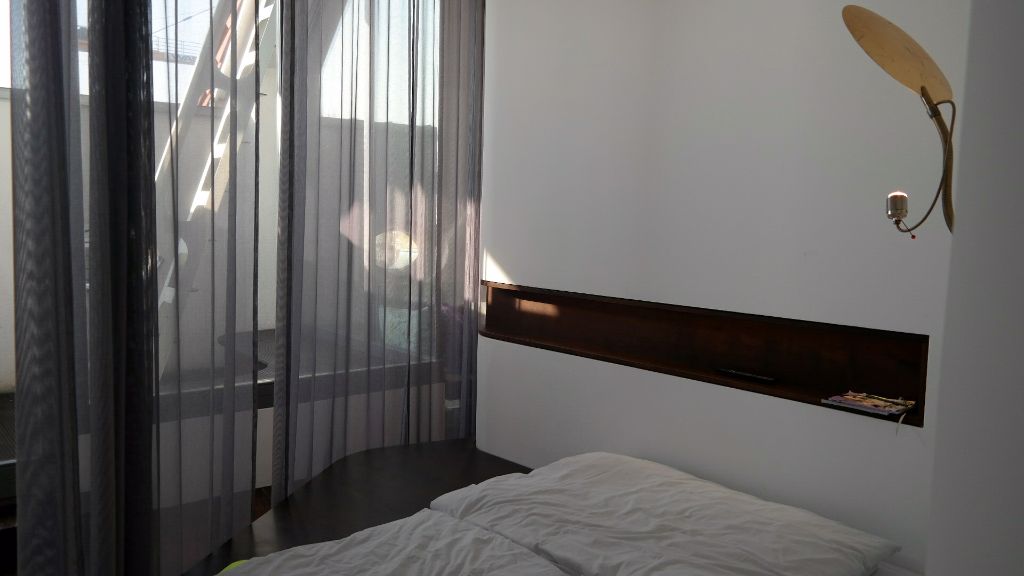 Variable curtains separate the sleeping area from the living room

MS: The renovation took two and a half years. Did you not go mental at some point?
AK: When I moved in, it was partly still a construction area. Indeed it was the drywall builders who nearly killed themselves (laughs). There was not supposed to be a single edge or corner. Everything is round – including the skylights. And this truly cost time and nerves. 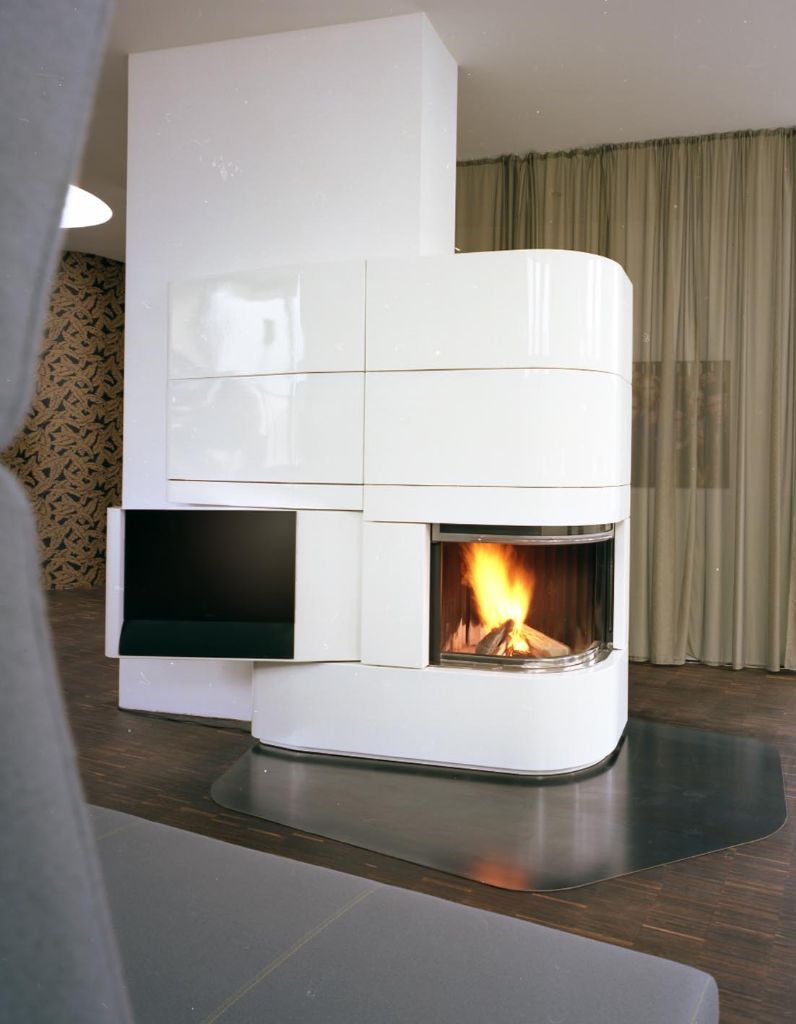 The rounded TV and fireplace element is made out of car steel: “Only on this surface the paint is so visually expressive,” explains Kassaei 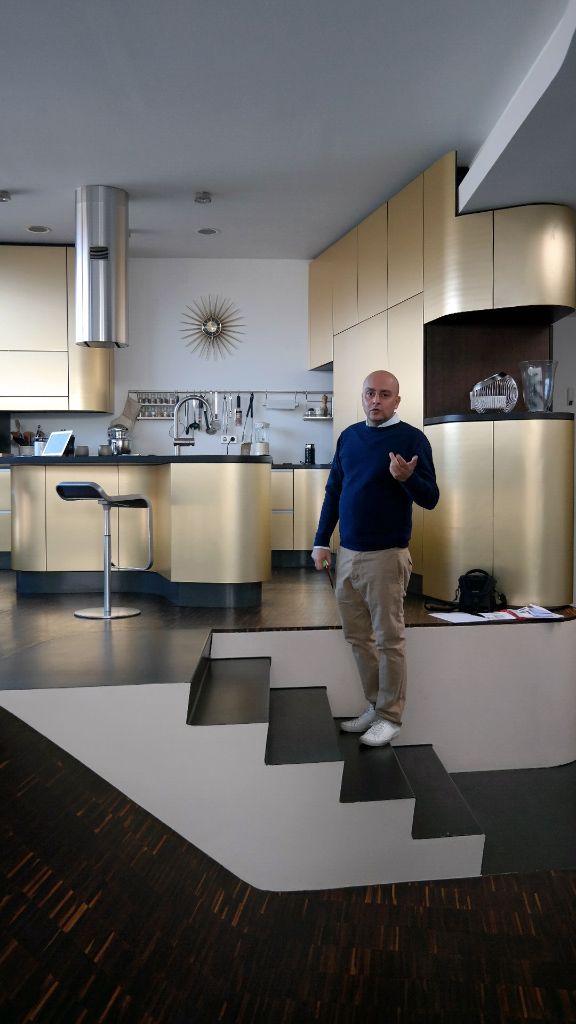 “Today, round hoods are a standard form,” Amir Kassaei says, “but when the home was built in 2004, it took us a long time to get one.”

MS: What does one, who actually prefers a cold objectivity and does not cook, do with a golden kitchen?
AK: I was looking for a strong color and there was only one possibility: the golden color of the legendary Daimler Benz Modell ‘/8’ from the 70’s. It took ages until I traced a meanwhile pensioned sprayer, who mixed “Byzantium-Gold Metallic” for me. And this in such masses, that about 40 meters of the gold-sprayed aluminum plates are backlogged. At our house, my wife cooks and as she wasn’t happy about the original minimalistic equipped variety, the kitchen got equipped up in cupboards and tackles. 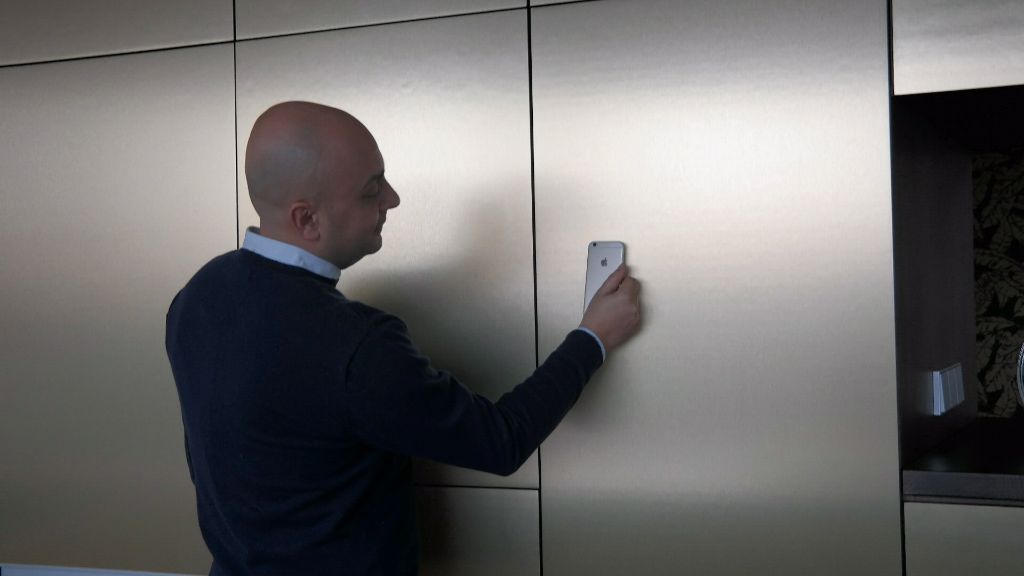 Amir Kassaei compares the gold tone of his iPhone with the kitchen front in “Byzanzgold Metallic”, the color of the legendary 70’s Mercedes model ‘/ 8’ by Daimler Benz

MS: You jet around the world 200 days of the year…
AK: … and the media applauds when Mrs. Merkel flies 20.000 miles in one week. That’s the sheerest stroll for me (laughs). 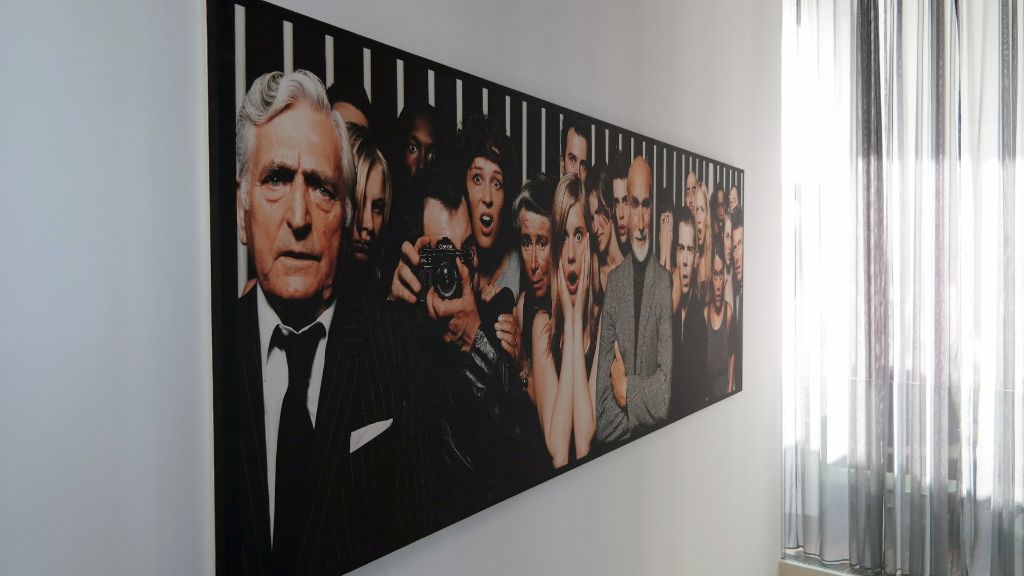 MS: With all the traveling and three residences: where do you feel at home?
AK: I am a refugee child; I’ve always been on the road. This truly has its benefits, as I can always adapt myself. I feel very homely in Ibiza. And also I’m always excited to be back in Berlin. Berlin is, apart from New York, the only city in which I would want to live. Being at home to me is more a feeling of not being bound to a certain place.  BvH 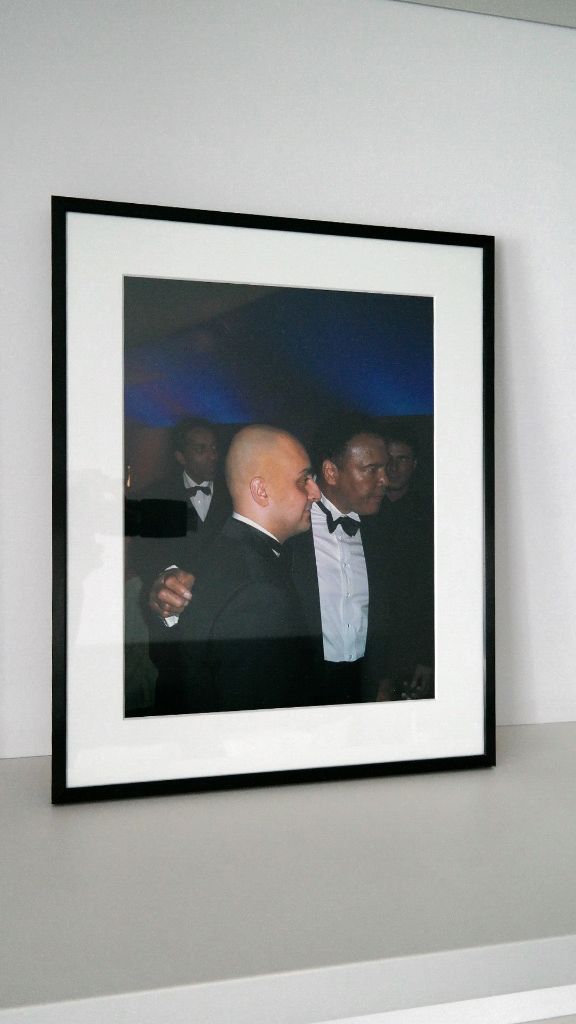 Amir Kassaei and Muhammad Ali at a Thanksgiving Dinner 2003. The boxer is a role model to Kassaei “for the ultimate consistency in his behavior”. 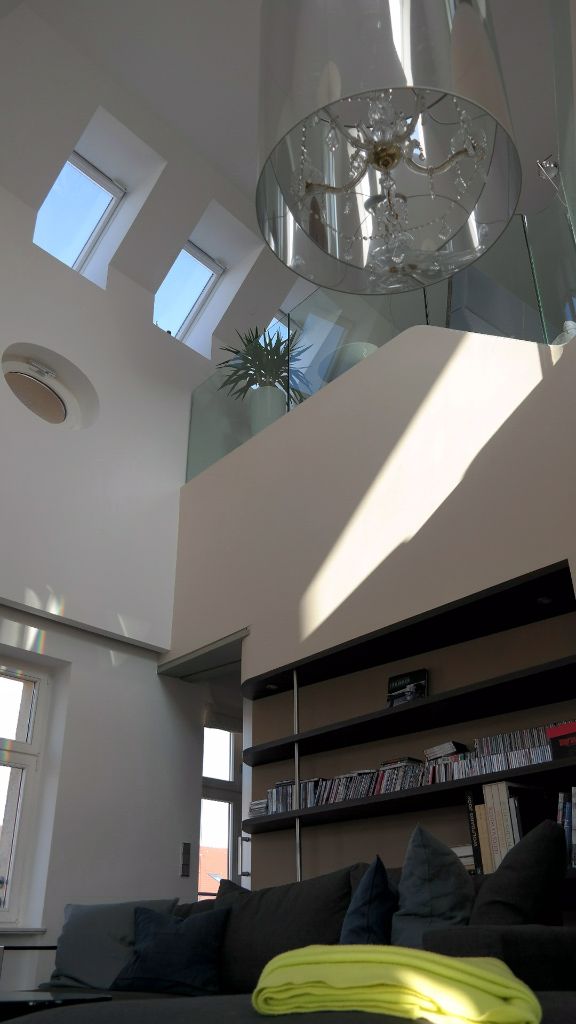 By removing the former ceiling, the gallery now measures seven and a half meters in height 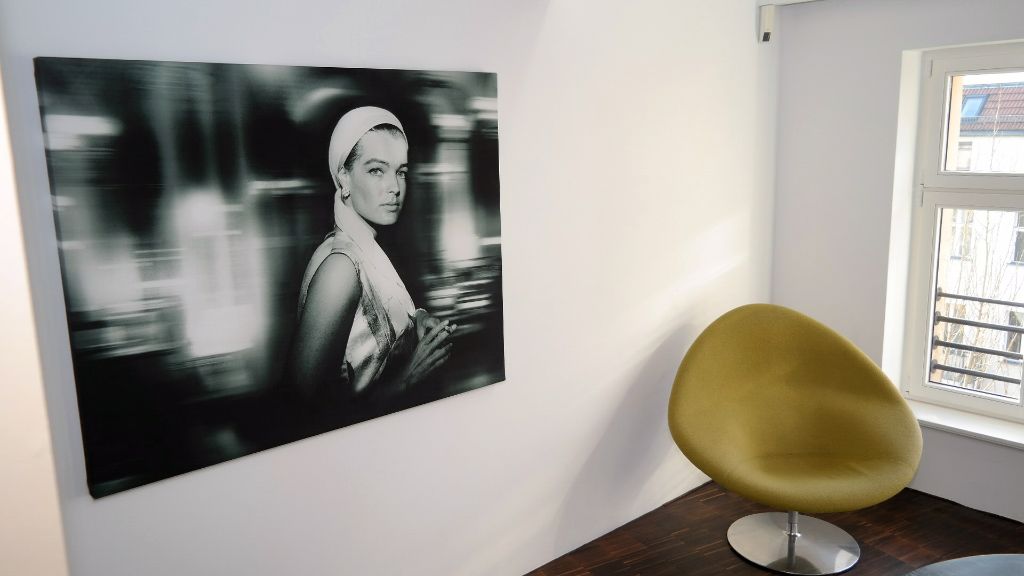 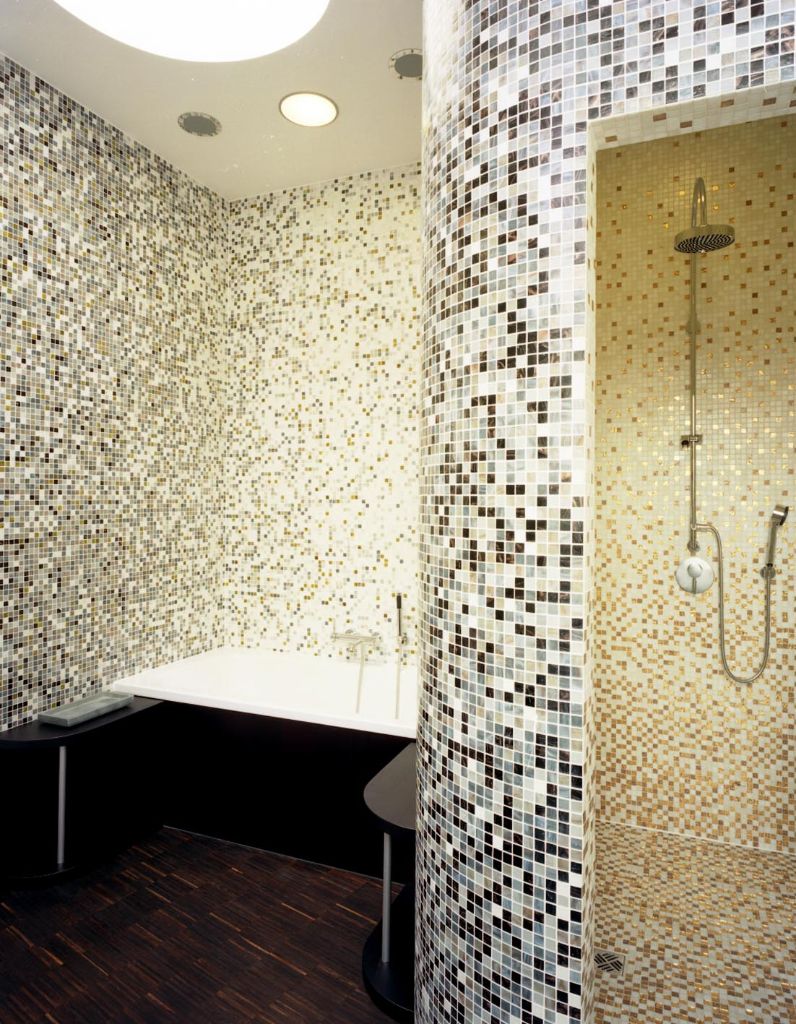 The morning sun shines on the golden Bisazza mosaic tiles in the bathroom. “It’ s like taking a shower of gold,” says Amir Kassaei 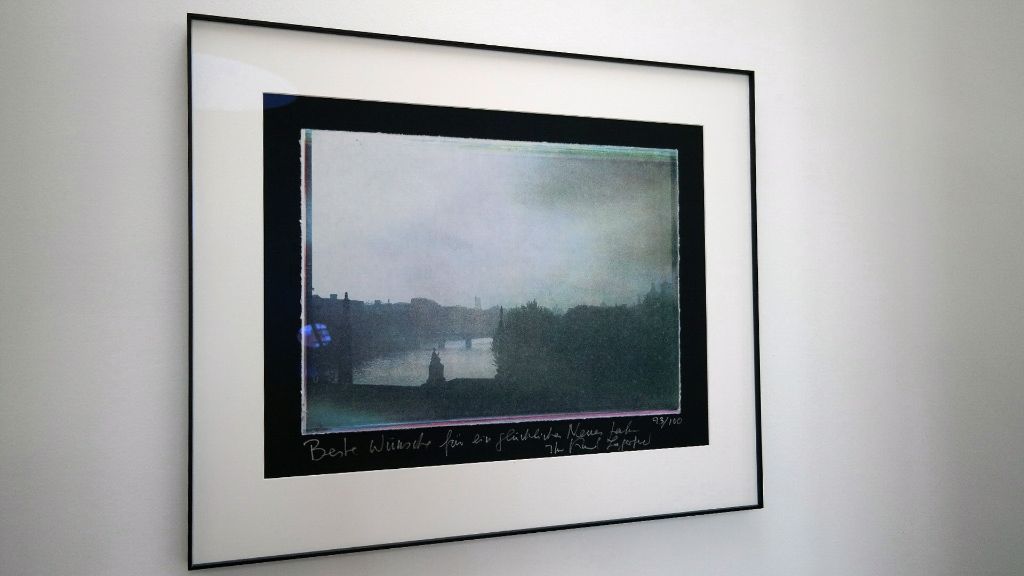 Else Edelstahl’s secret Wunderkammer in Berlin
Who: Else Edelstahl, Host & Initiator Where: Berlin – Friedrichshain…