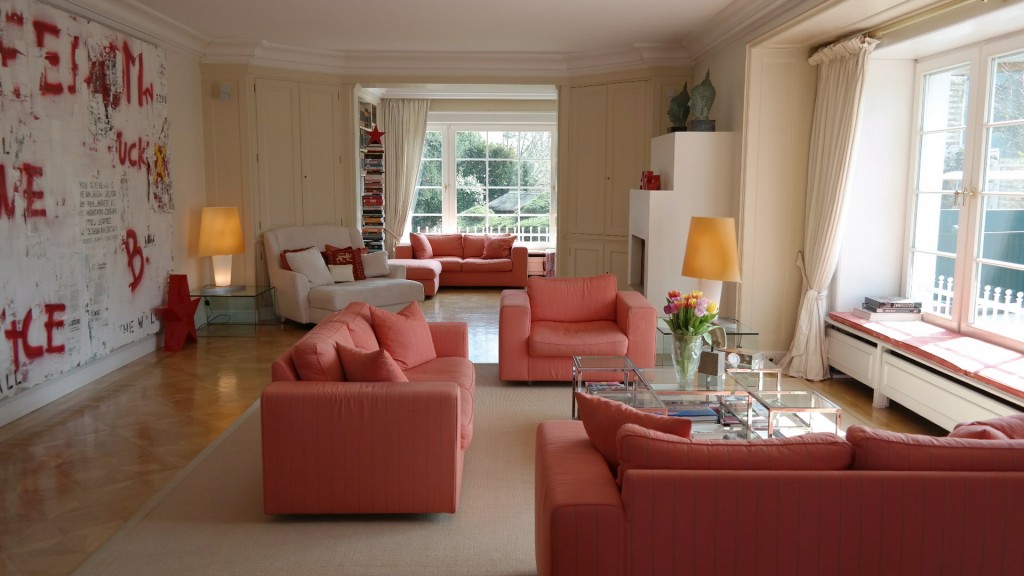 The Living Room; On the left the painting “The Wall”. To get it into the house, a door and its frame had to be expanded

What do Berlin’s VIP Stylist Udo Walz, TV-Lady Sabine Christiansen and former US President Bill Clinton have in common? All of the above own a painting of the artist Freddy Reitz. For 17 years the German-American and her family have been living in a 1928 built mansion, seemingly english lodge, in Berlins district Zehlendorf. Being brought up in Dallas, the fervent Cowboy Boots and Converse wearer adresses the East-West issues in her works, in which apart from the famous Heinz Ketchup Bottle the American Flag is strongly represented. Recently seen in a special edition for the marque Smart. 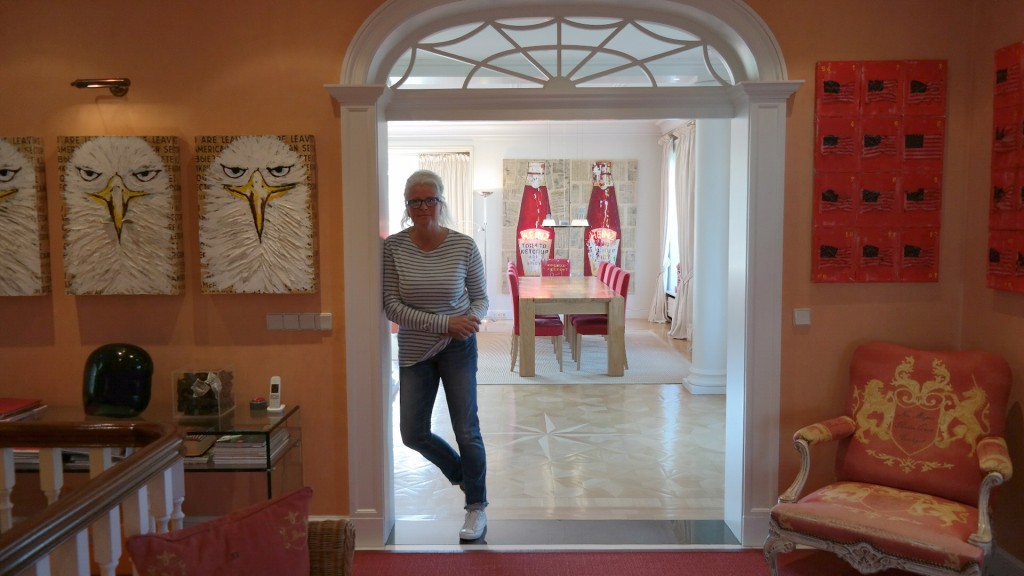 The artist Freddy Reitz in the Entrée of her Berlin home

MyStylery: Congratulations! Your painted Smart is soon to be seen in the Daimler Museum in Stuttgart.
Freddy Reitz: Thank you. It is the first art car produced in series. 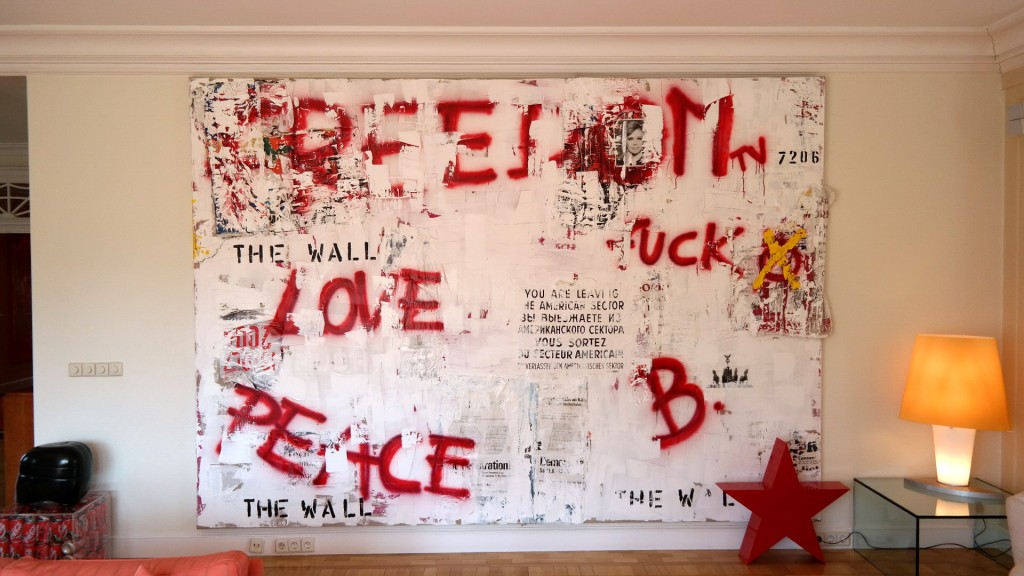 “The Wall” – a throwback to the wall – was built within three years. The red star next to it – also from Freddy Reitz – symbolizes the Russian sector 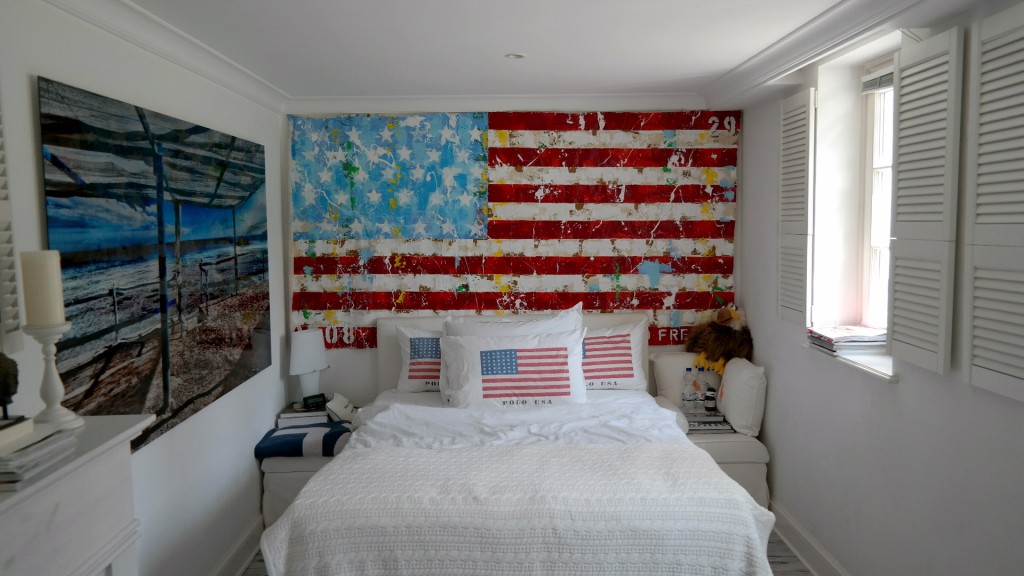 Even the guest room shows its colors

MS: You often use the US Flag as a theme. Can this be seen as a triubte to your home?
FR: Yes, amongst other things. It is a form of confession and pride. Americans are patriots to the core. Even before 9/11 the US Flag is the greatest good, and Freedom. I have never understood that there are people which still wish for the DDR. 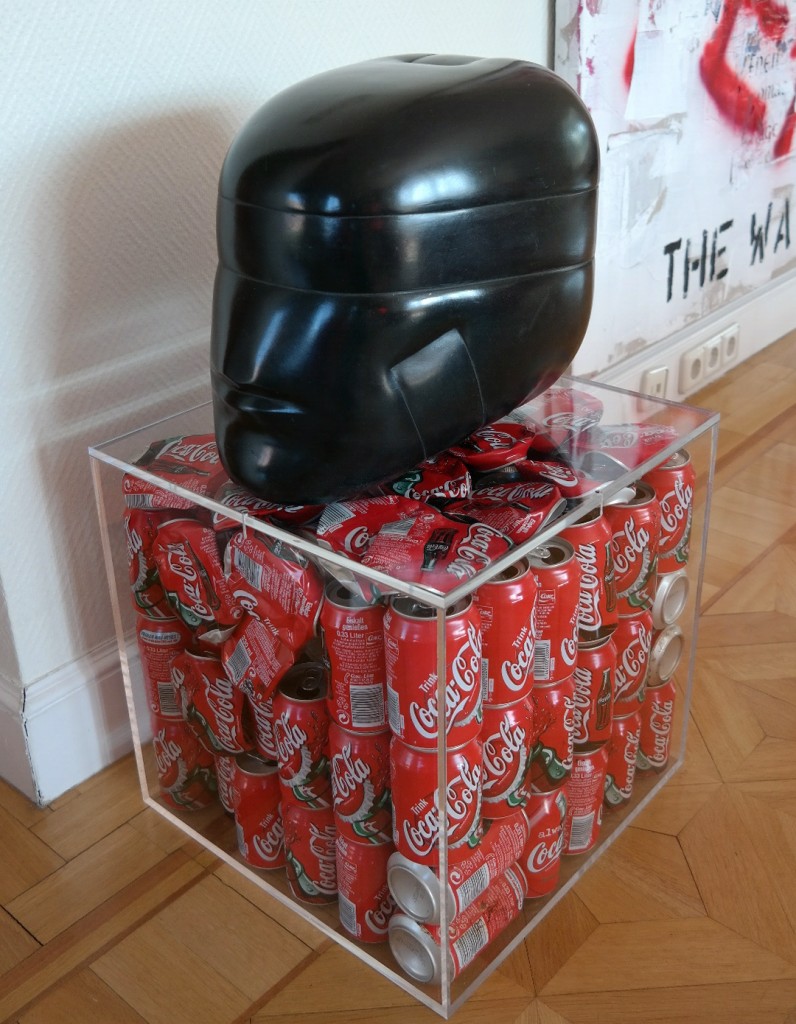 Sculpture by Hede Buhl and the work “Cokebox” by Freddy Reitz 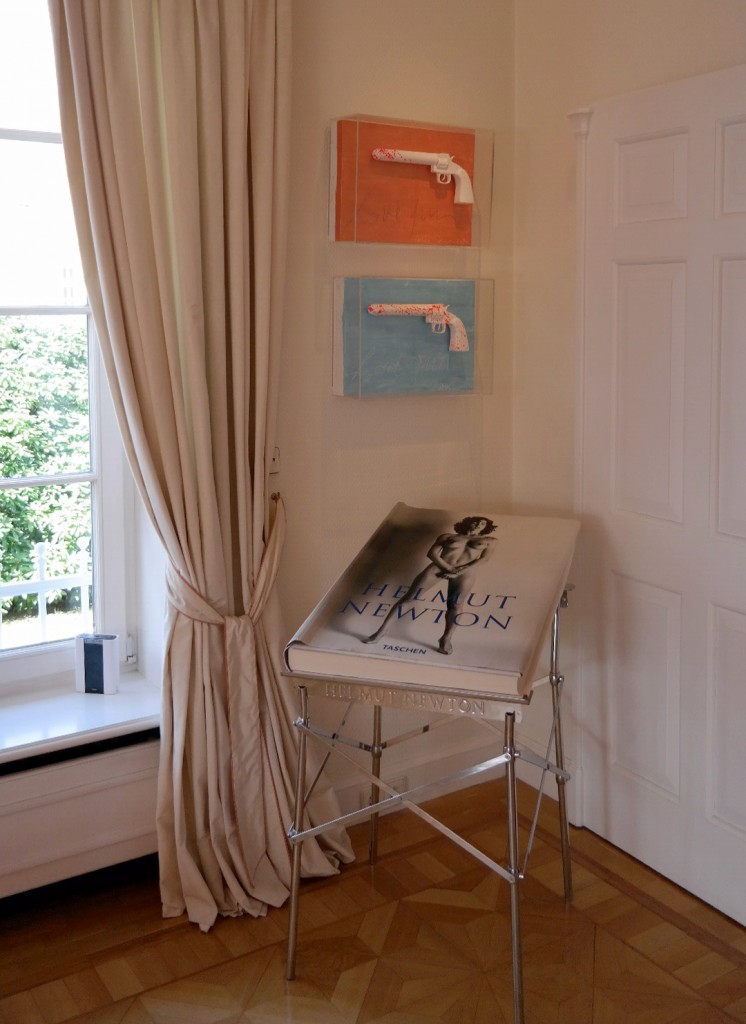 MS: In your home there are, besides artists like Rainer Fetting, Hede Bühl or Arne Quinze, a lot of your own paintings…
FR: …as, for example, „The Wall“ which is so huge, that we had to remove the door and doorframe to get it into the house. I can’t have enough paintings of my own around me. But, I especially love Arne Quinze’s „Love Guns“ who I got to meet in Miami through Barbara Becker. However, I had to promise not to remove the Guns from the boxes (laughing). 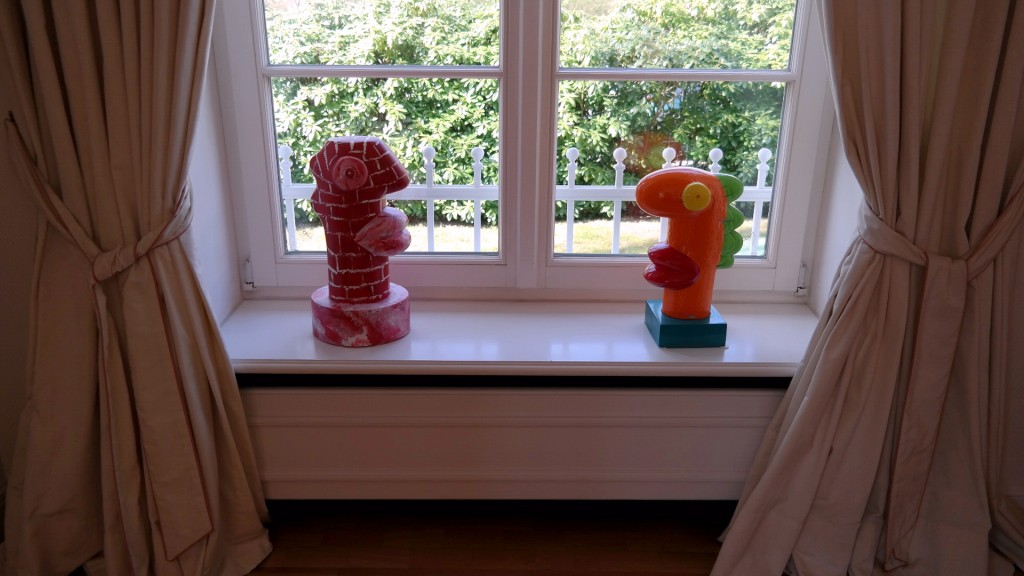 Figures of the French wall-painter Thierry Noir, which are owned by Freddy Reitz for more than 20 years 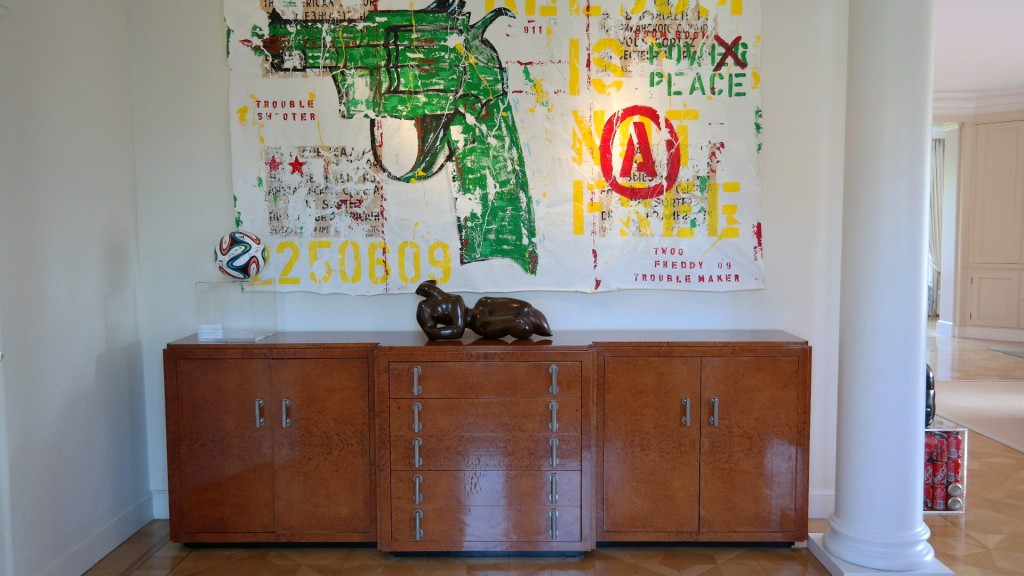 Infront of the artwork “troubleshooters” by Freddy Reitz, a bronze sculpture by Karl Hartung (1948) on an art deco sideboard. On the left the World Cup football 2014, signed with all players signatures

MS: In your works as well as your home the color red is very dominant. How come?
FR: Red is multifarious and emanates comfort. I would not be able to live in cool, designer rooms. I need a surrounding in which my soul can rest. 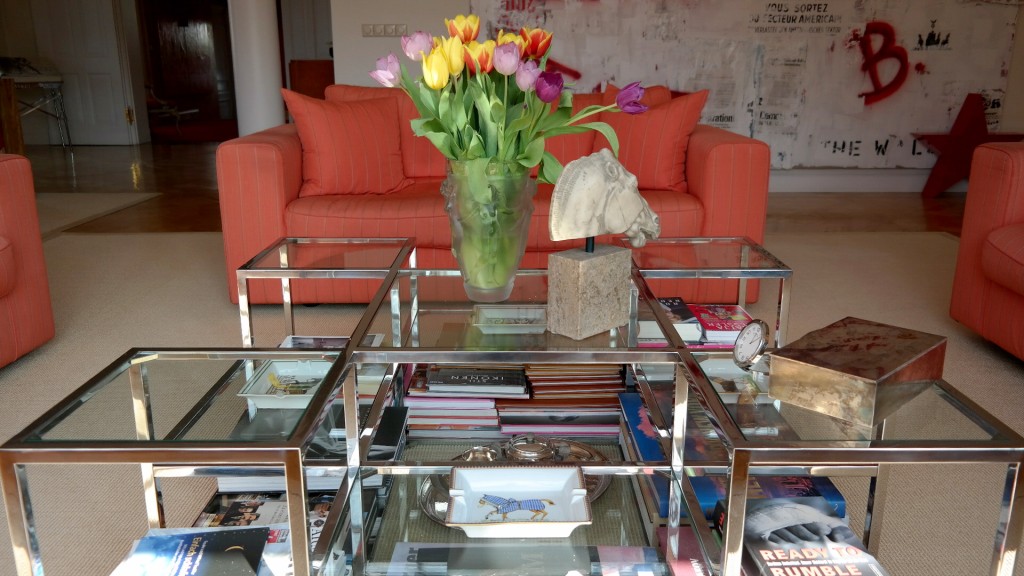 Still life in the living room 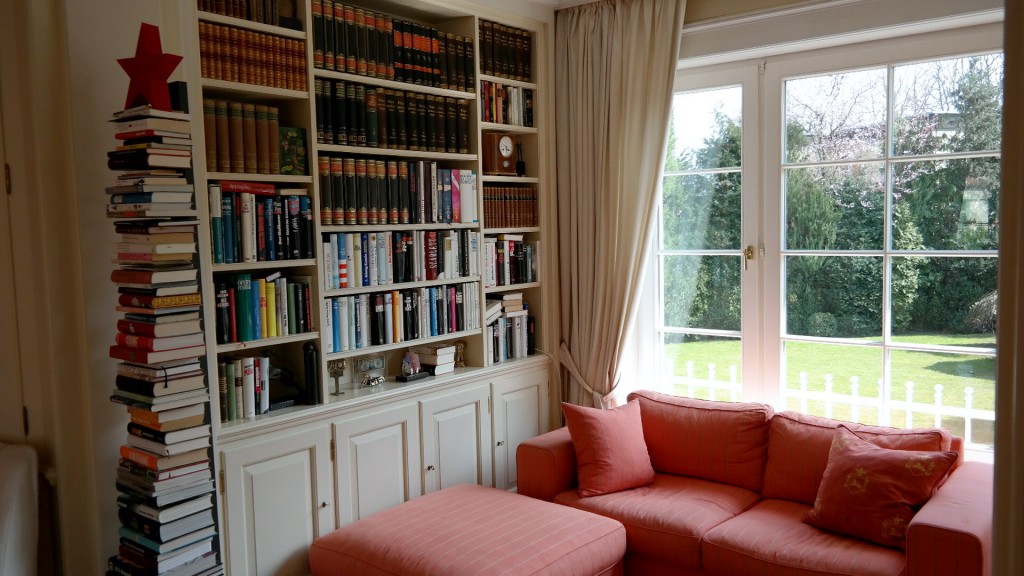 The view into the garden from the library 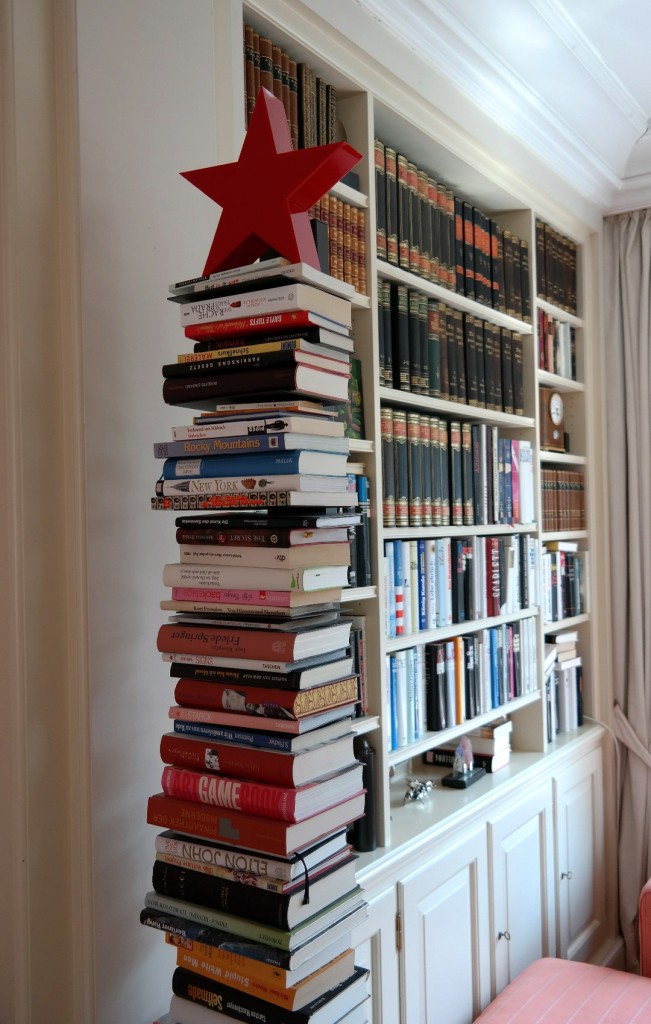 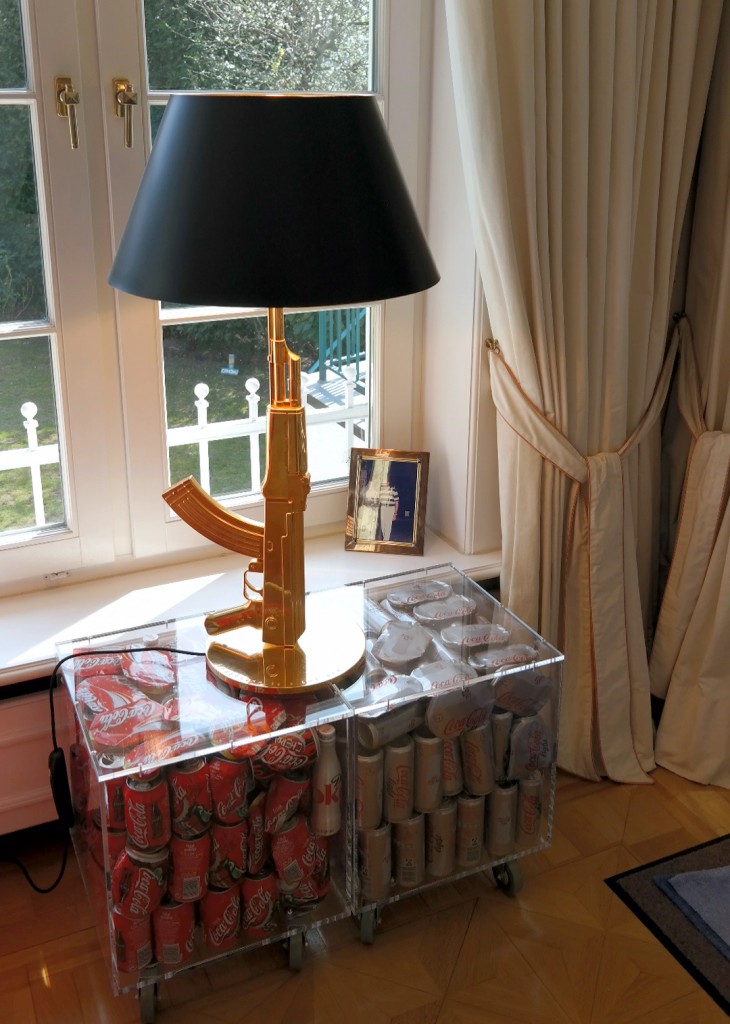 Freddy Reitz’ “Coke-Boxes” and the tablelamp “Table Gun” by Philippe Starck – it is modeled on a Kalashnikov, an invitation to peace

MS: You studied communcation sciences before you discovered painting on a proffesional basis…
FR: …just because my parents didnt support me in my art at first. I have always painted, and enjoyed it. When I had my daughter, my first easel was standing in the restroom, I later on moved on to the bathroom. I don’t work there anymore though (laughing). 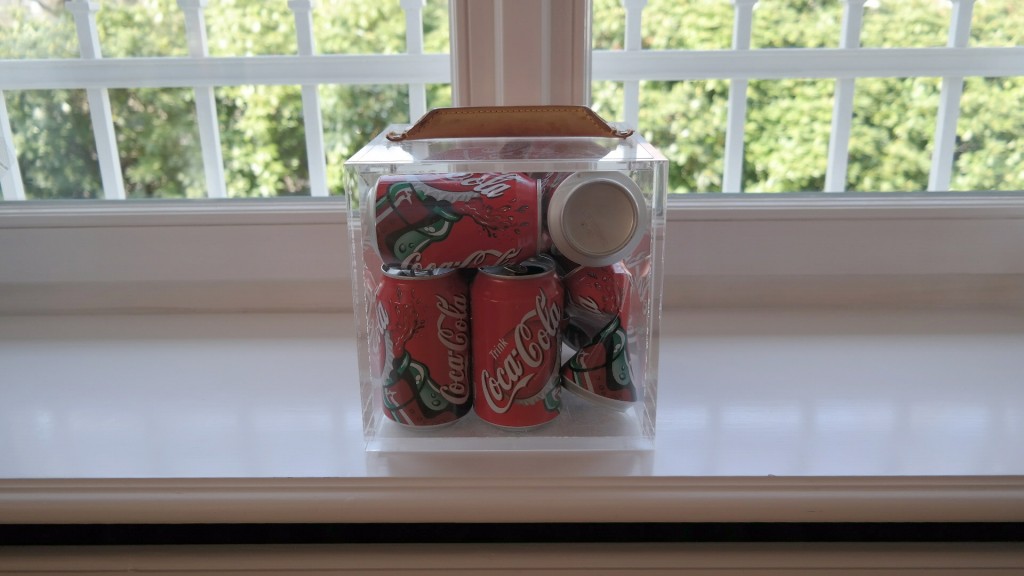 For her Coke-box projects in 2007, the passionate Pepsi drinker Freddy Reitz donated a neighboring school pallets of Coke to work with the empties 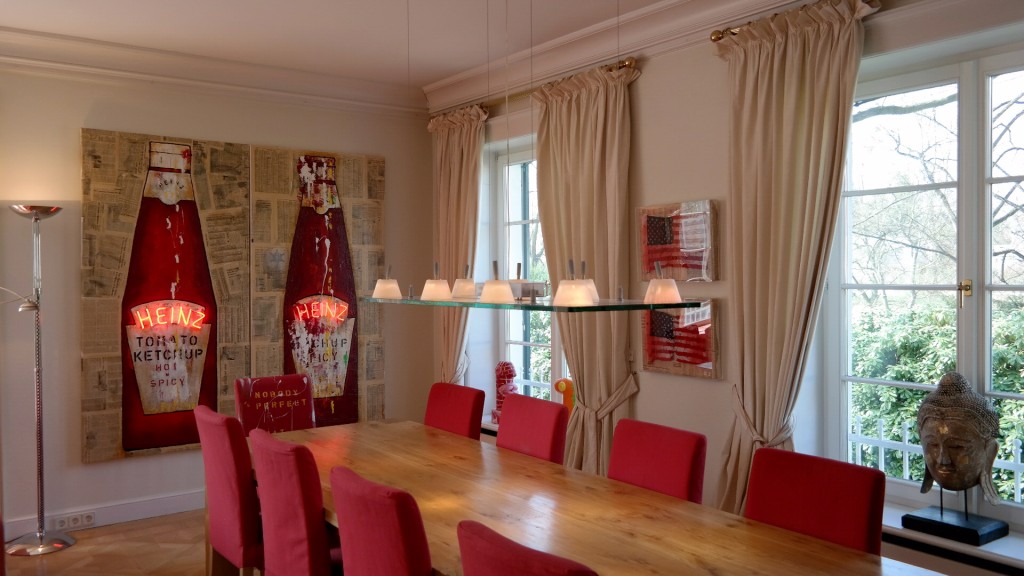 MS: There are a lot of people who feel like artists, but not everyone is successful.
FR: I was lucky. 1999 Udo Walz comissioned a 180 x 220 cm big work. That was my breakthrough. What followed were exhibitions in the Dresdner Bank, in Zurich, Miami, New York etc. 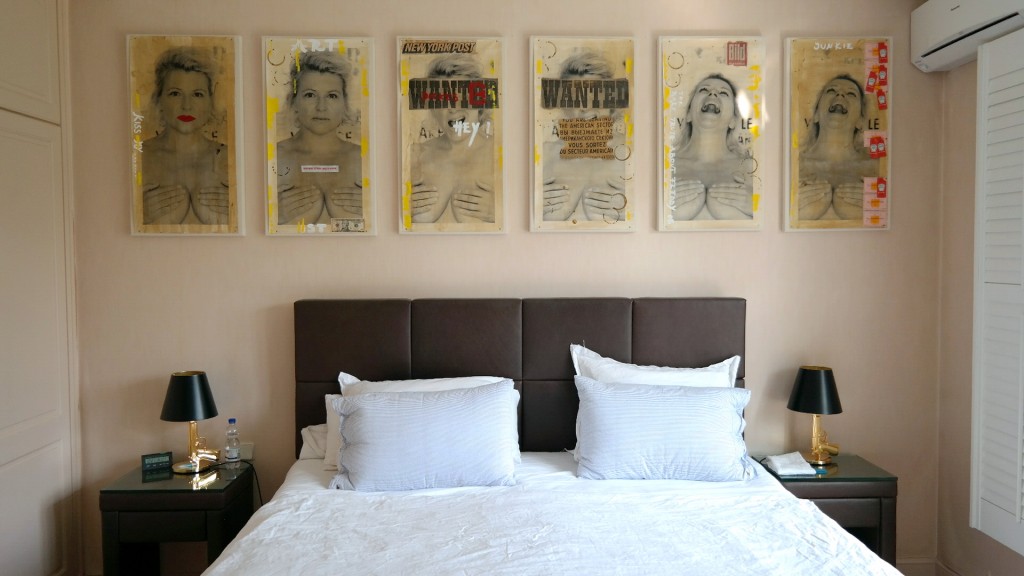 MS: You passionately wear Cowboy Boots. How many pairs do you own?
FR: I probably have around thirty pairs. I wear them preferably unconventional with an evening gown and a denim jacket. With that specific look, I managed to get into the column „sonderbar“ (weird) of the magazine „BUNTE“. BvH 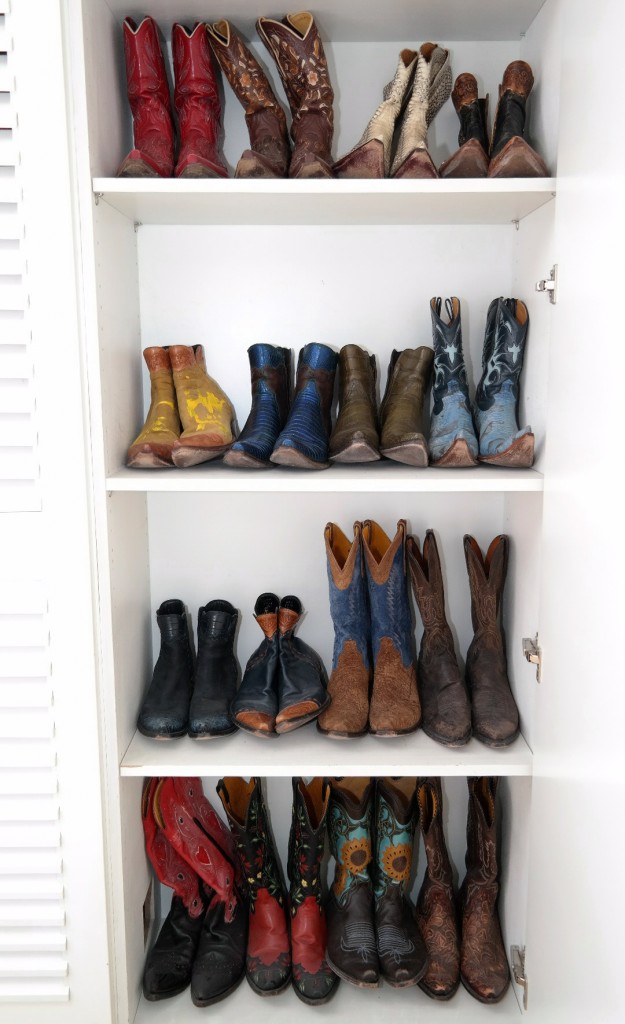 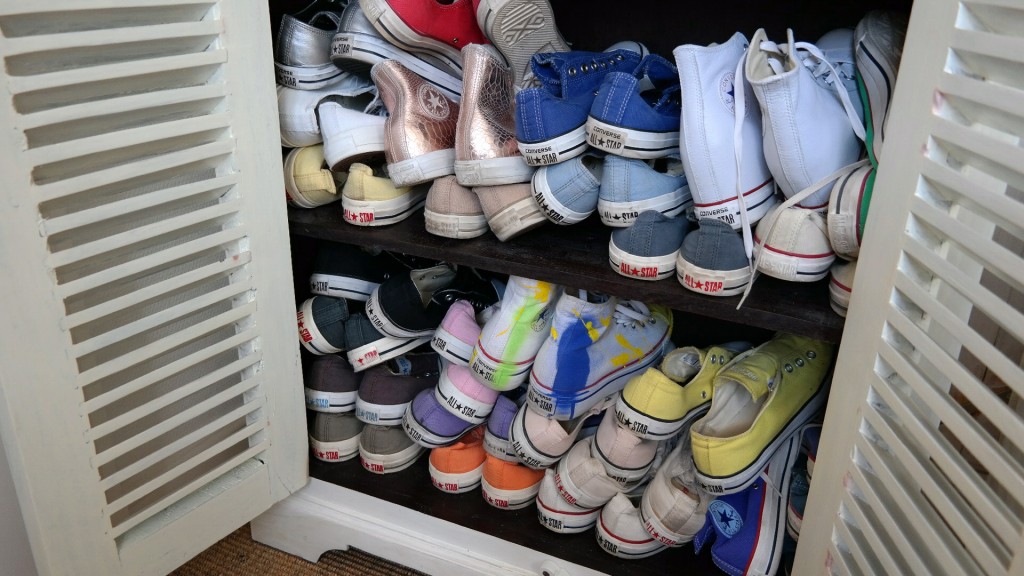 … but also loves the model “All Stars” of Converse 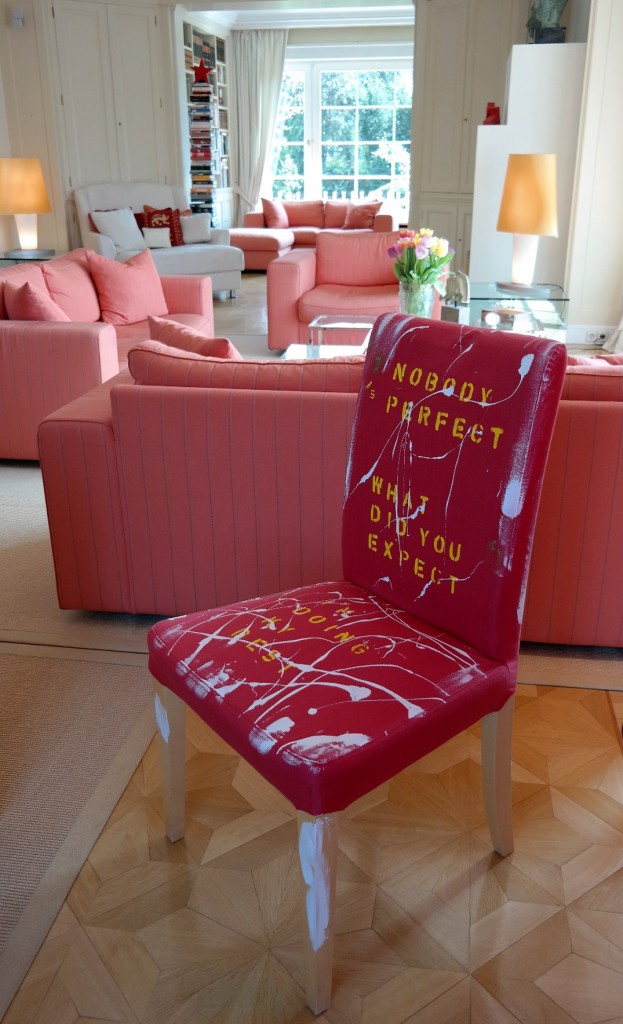 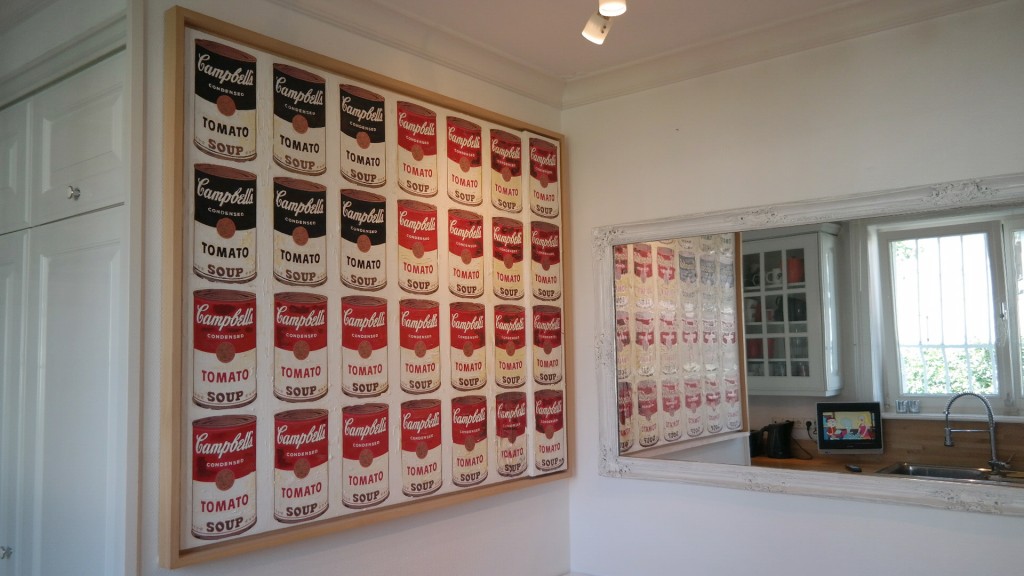 View into the kitchen 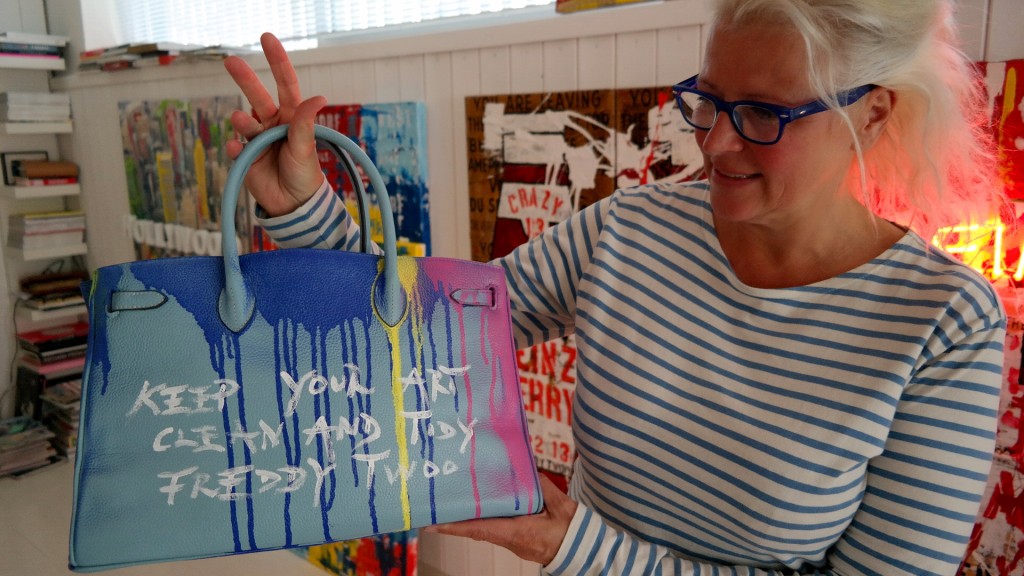 Freddy Reitz with one of her Birkin-Bags from Hermès. Others are waiting to be painted 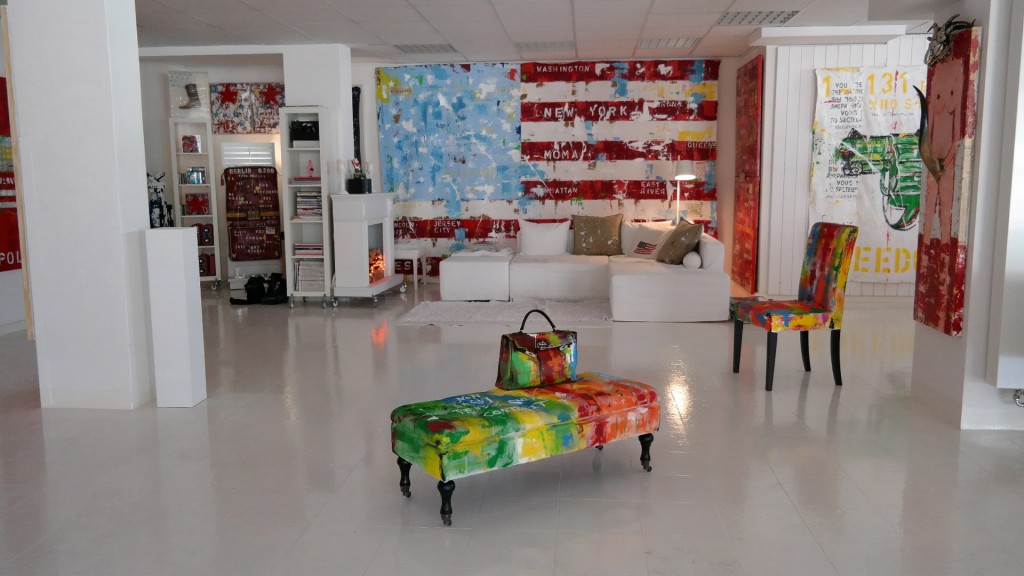 In the studio of Freddy Reitz: the artist has painted the stool, bench and Hermès bag