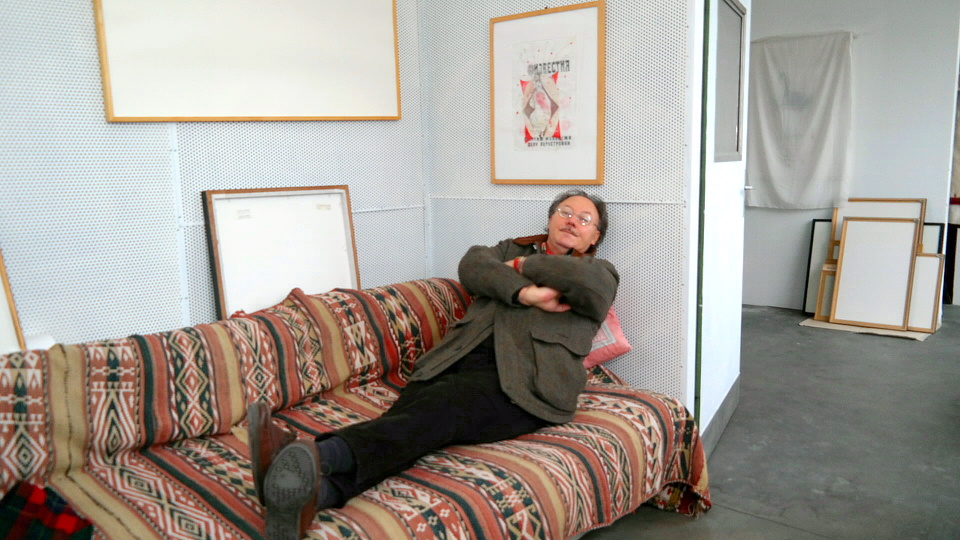 Haralampi Oroschakoff in his studio …

The atelier of artist Haralampi Oroschakoff is located in a 30’s building of an industrial district in West Berlin. Although I know the Austrian-born for many years now, this is my first visit to the nearly 300-square-meter studio, which offers huge windows with a view into a garden settlement. Light shines into the loft-like rooms in which the largely sized pictures of Oroschakoff arise. The avowed Wiener comes from the Old Russian noble family of the Boyars Haralamow-Oreschak, which can be traced back to the eleventh century. For 16 years the internationally successful artist lives with his wife, Countess Diana von Hohenthal und Bergen and the joint children in the German capital. His works hang at the walls of celebrities like Vicky Leandros, Jette Joop or Princess Firyal of Jordan. Nevertheless, his artistic career has always been a struggle for recognition. 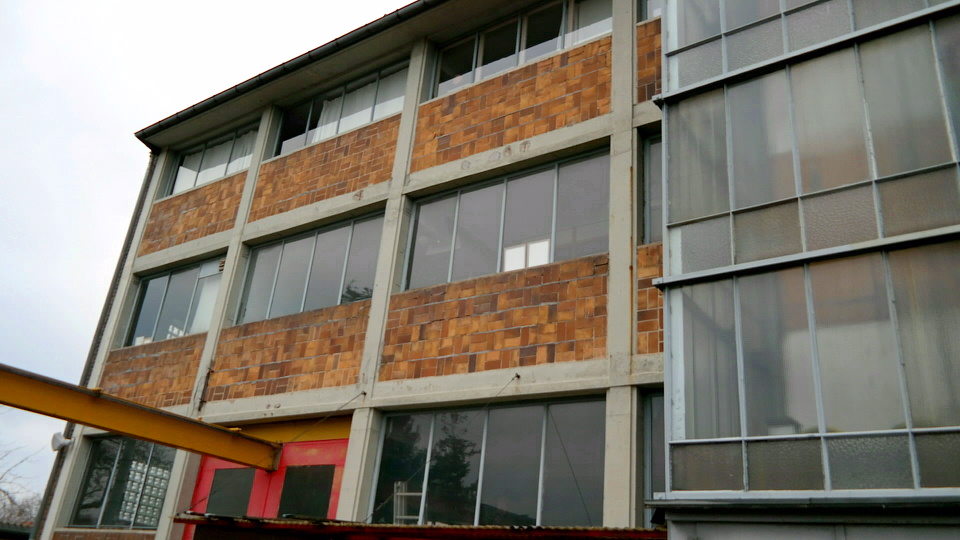 MyStylery:  An artist’s studio automatically associates the idea of creative chaos. I’m amazed by the tidiness of your place – it’s downright homely…
Haralampi G. Oroschakoff: To me the atelier is not only a think tank, but also the last place that offers me some personal freedom. I also need to feel comfortable and this is why the rooms haven’t been reduced in their expediency. 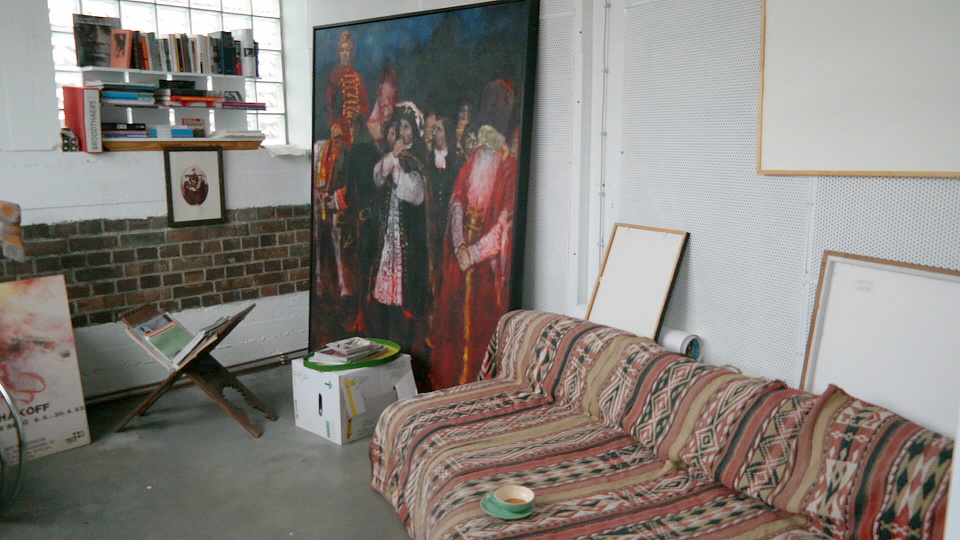 “I need to feel comfortable and this is why the rooms haven’t been reduced in their expediency.”

MS: What does the initial ‘G’ in your name stand for?
HGO: Georgijewitsch.
MS: Your father was a successful steel producer in Vienna, where you spent parts of your childhood. You could have followed his footsteps.
HGO: My father never got over the loss of the Russian Empire and the fall of the aristocracy. I should have taken over the factory, but after a year it was clear that this wouldn’t be something for me. I often overslept, thought it’s more amusing to go for Lunch instead of driving to construction sites. My father was also a mathematician and structural engineer, for example he built the Franz-Josef train station in Vienna. I, however, was an incredibly bad student who flew from ten boarding schools.
MS: Did your father make you feel that?
HGO: He never talked with me, only talked to me. Even when I exhibited at the Biennale in 1988, he remained implacable. Only when Forbes listed me as newcomer star next to Jeff Koons and Franz West in 1990 my father understood and even came to an exhibition in Belgrade. 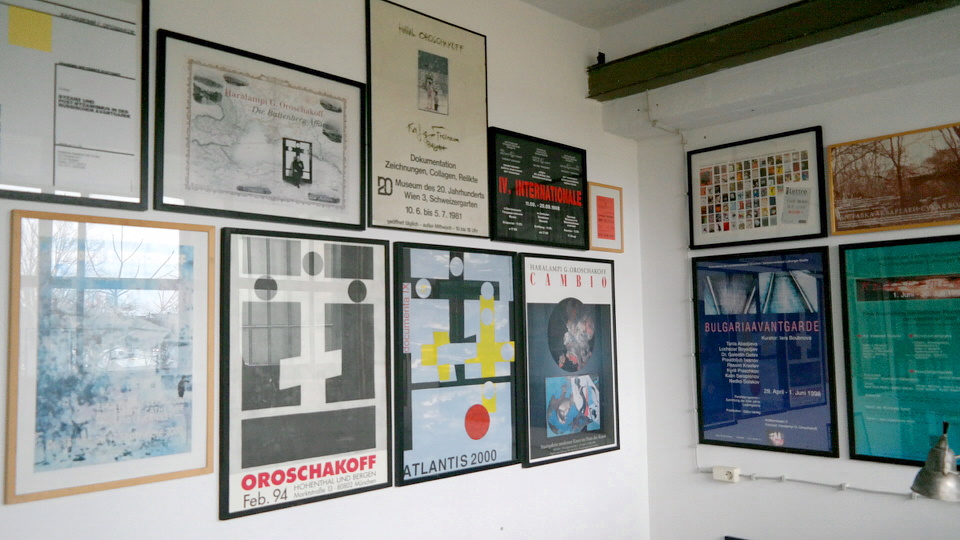 On the wall in Haralampi’s office posters of his exhibitions

MS: That must have been very sad for you to experience no recognition as a young person.
HGO: As a child I was a silent, soul-searching powerhouse. I have much compensated by sport, I played tennis, rode horses, later drove classic car rallies. And I painted. For me drawing was thinking with a pencil. 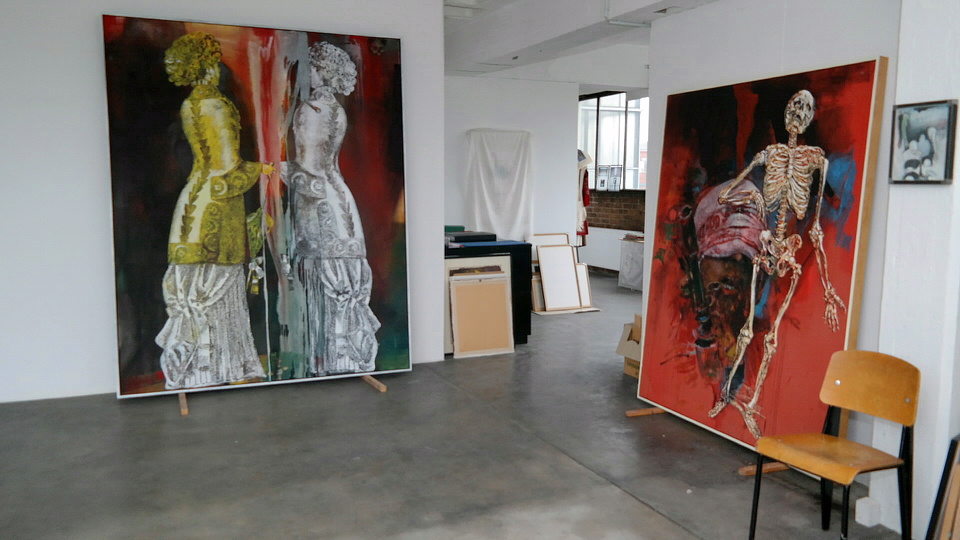 MS: Why did you quit the Viennese academy of arts after only three months?
HGO: The structures were too rigid. I always hated dogmas and ideologies. It’s an inner ambivalence in me. As an artist I have to destroy things to create something new. I have actually damaged my career three times itself.
MS: What do you mean?
HGO: In the 80s I got the needed media attention to be considered as successful. But this was not enough for me and in the 90s I felt I had to face up to Eastern Europe, also as a tribute to my roots. At the turn of the millennium I went to Berlin. However my gallerists didn’t support my decision. It was always a new beginning. 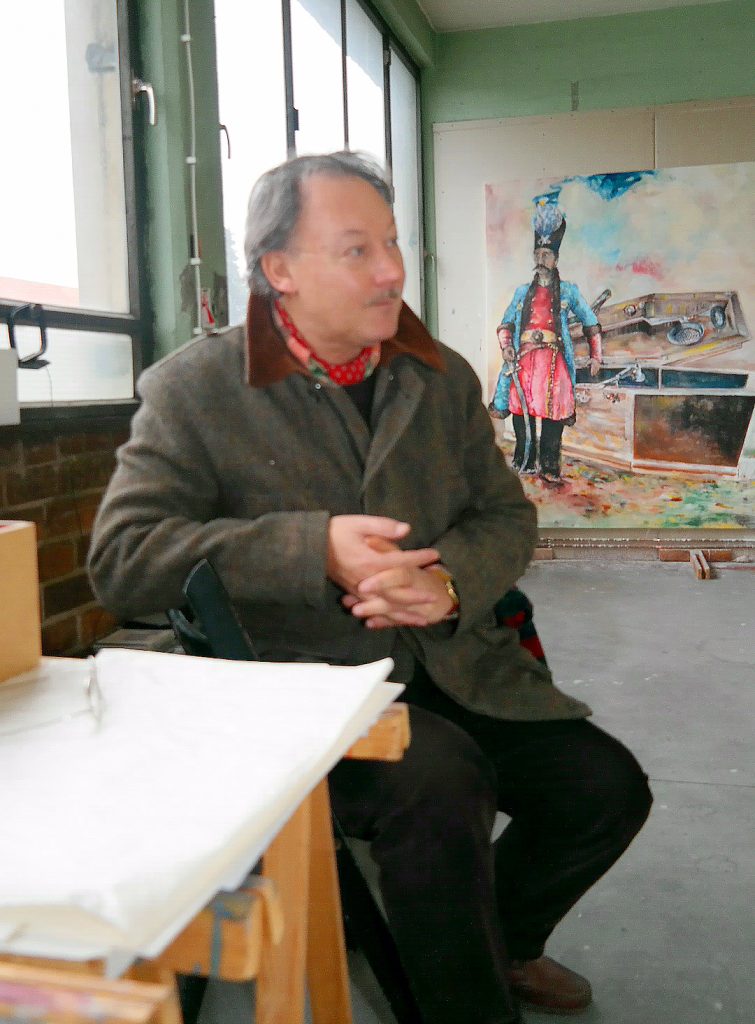 “True personalities only exist barely those days. Nowadays it’s all about consumption and verbal egalitarianism.”

MS: The extreme lifestyle and the provocation seem to be parts of your personality.
HGO (laughs): The dandy and aristocrat always irritated the art scene, merely by their appearance. I also maintained these relationships, including drinking bouts and brawls – but always with the necessary elegance.
MS: The ‘Paris Bar’ in Berlin has been your second living room for years. Nowadays you seem to be very brave. Don’t you miss something?
HGO: Let’s say it like that: I mostly said adieu to vodka. I’ll come back.
MS: You describe yourself as a family man. Does family play such an important role to you due to your childhood experiences?
HGO: I consider myself a “penultimate member” in the family series. That’s why I have to give more living tradition to the next generation. This does not only include friendship and respect, honor and responsibility. I also hope that later, my children are going to preserve my work. BvH 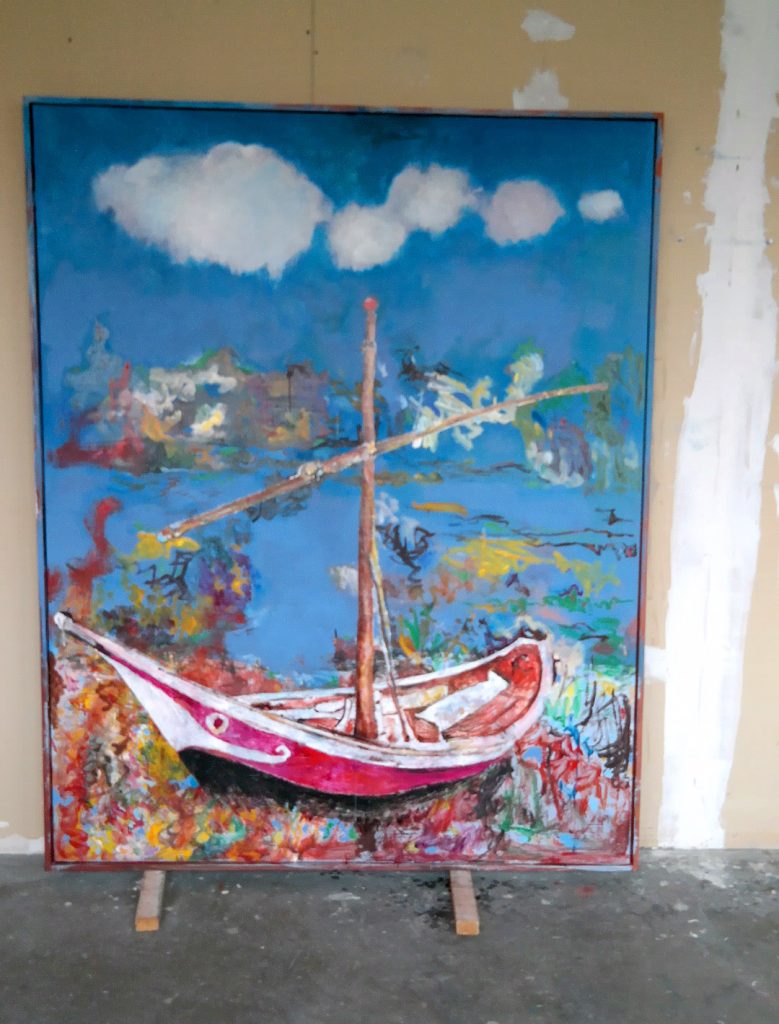 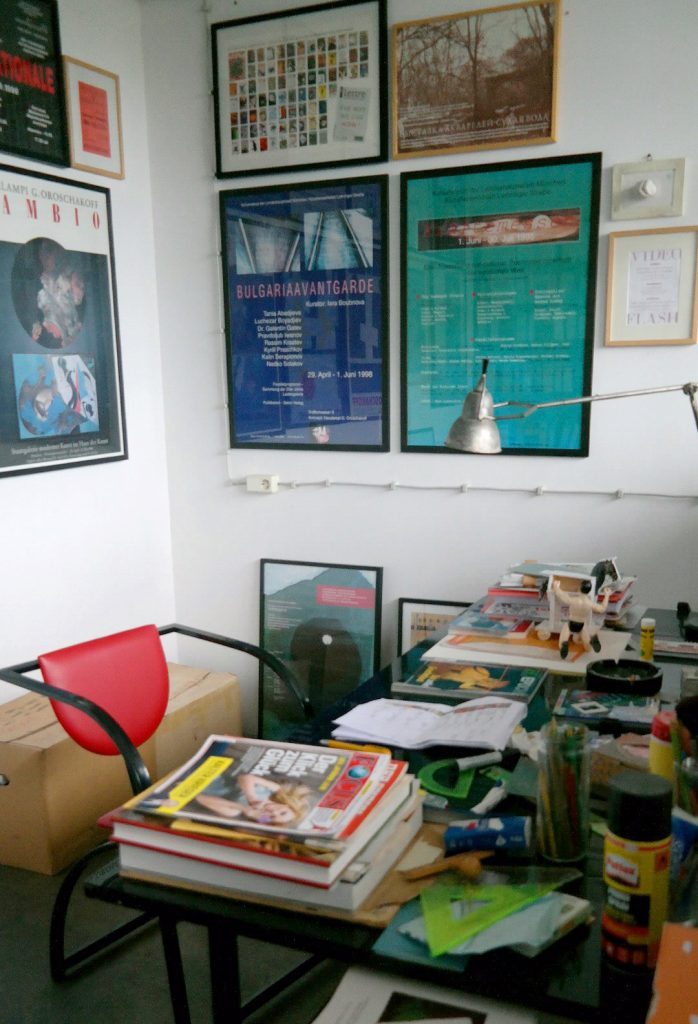 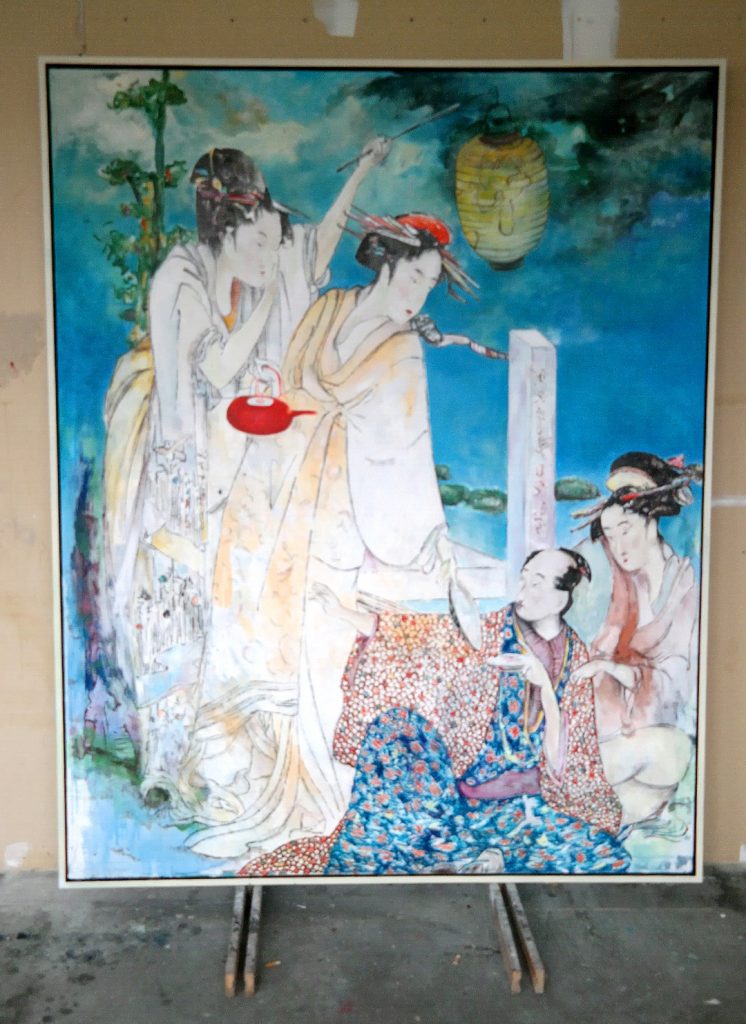 Today, paintings, drawings and texts are from equivalent expression for Oroschafkoff. Here the artwork “Different Worlds” (31), 2014 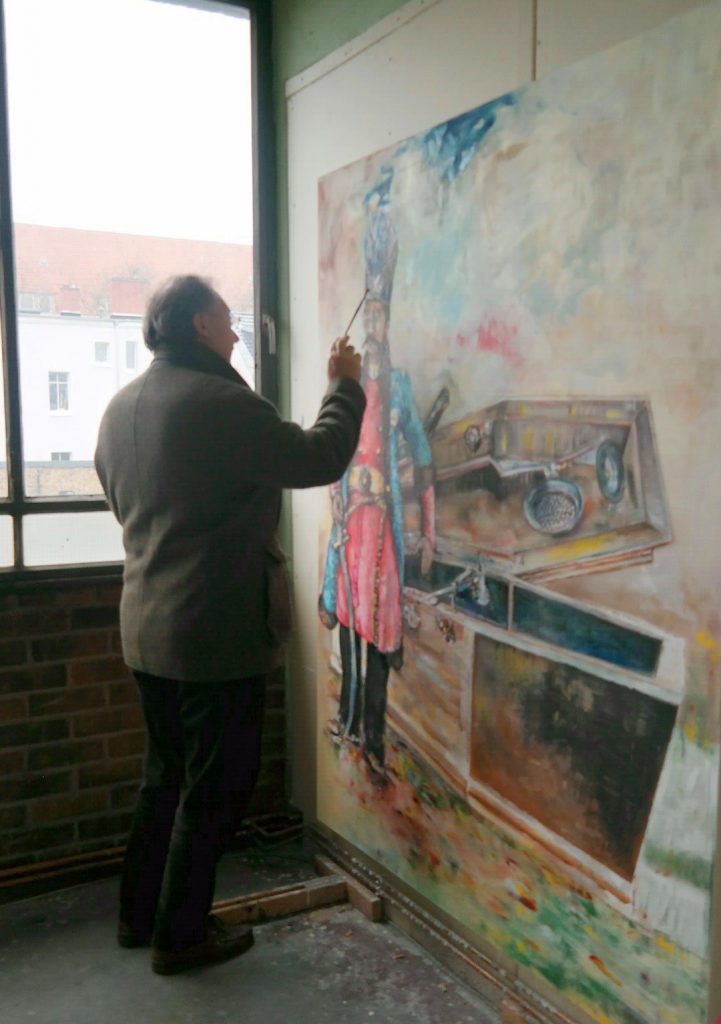 Haralampi Oroschakoff: A Dandy in the art scene, who turns up rock music of Lou Reed and Metallica whilst working 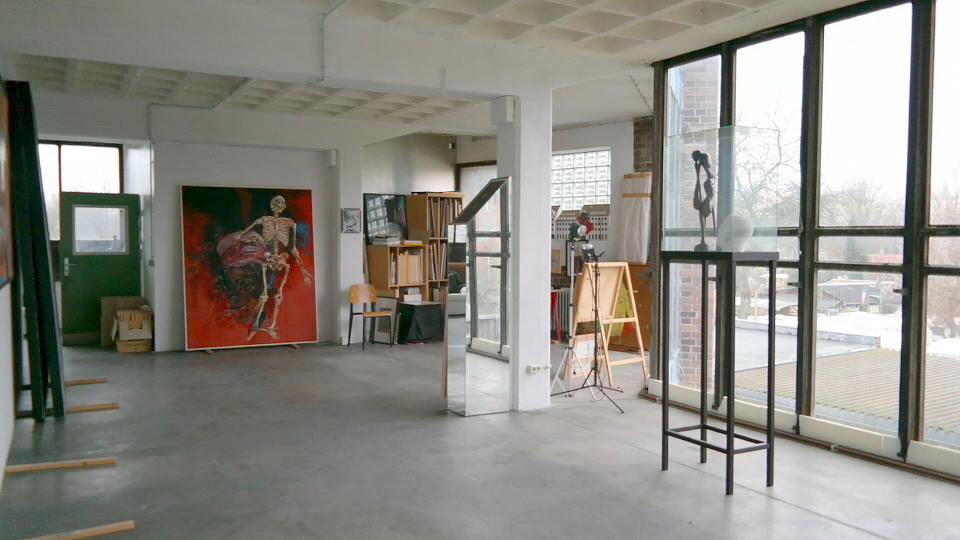 While the large-format works of Haralampi Oroschakoff arise in the studio in Berlin, he paints Aquarelle on the family estate in Cannes: “With a sea view and an incredibly beautiful light.” 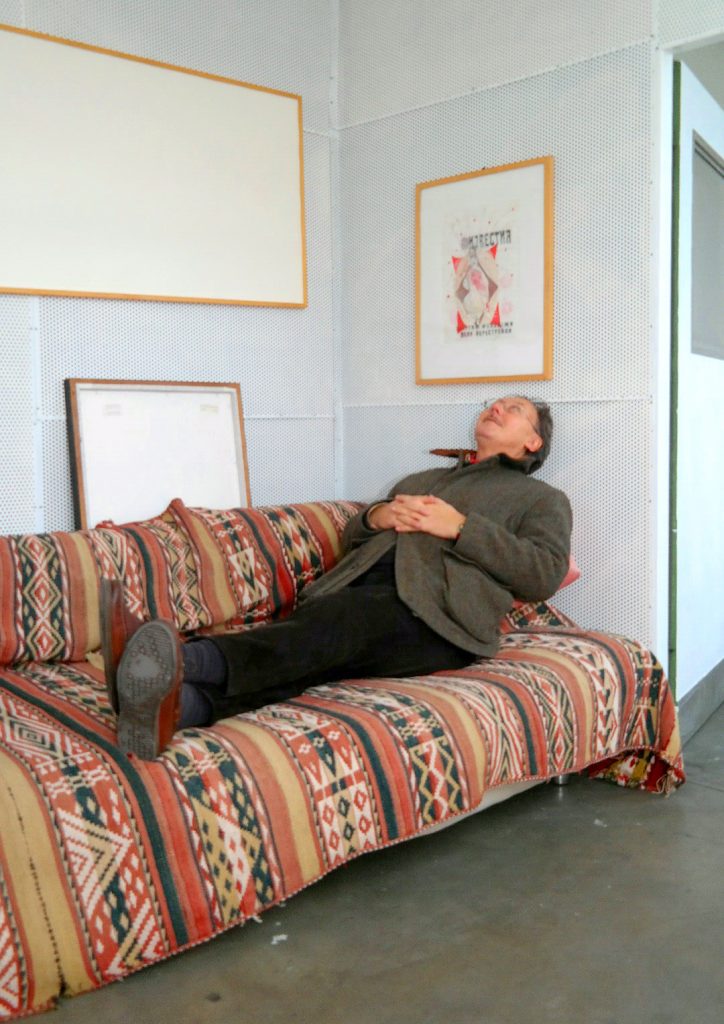