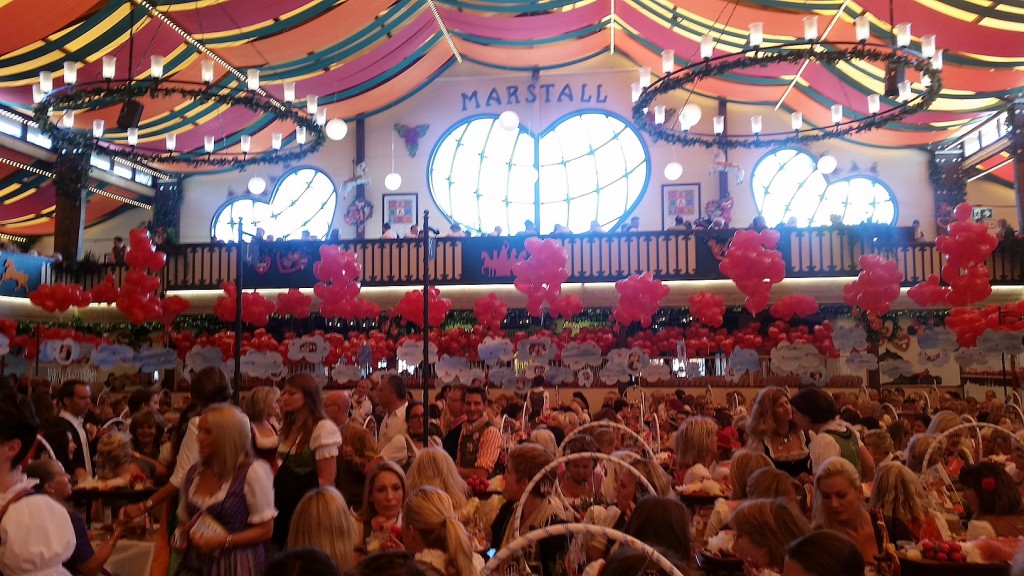 1.300 ladies from all over Germany are eager to oblige

Wiesn Alarm: When rental car entrepreneur Regine Sixt invites to her traditional ‘Ladies-Wiesn’ on the first Monday after the opening weekend of the Oktoberfest the German ladies are eager to oblige. Not a single woman who would want to miss this exclusive – and therefore highly desired- invitation. 1.300 ladies get ready and arrive dressed in the newest Dirndl creations at the Marstalltent at the Theresienwiese in Munich. The beer tent transforms to a runway and selfie setting. No admittance for men by the way. I was there and will introduce you to some of the ladies in their gorgeous dirndls. Who wore the most beautiful one? 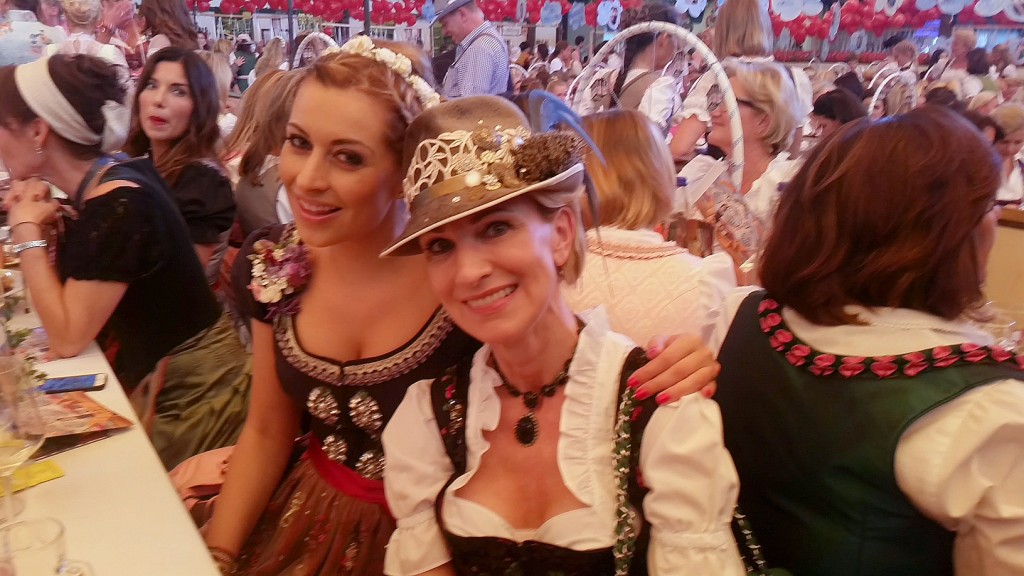 Moderator Verena Kerth and me in swaying-rhythm

The guest list reads like a who-is-who list: “Some of the most important women from the world of business, politics and society are represented here today”, welcomes Regine Sixt the attendants, among them mother-in-law of Swedish princess Madeleine – Eva O’Neill, Princess Elisabeth of Bavaria, the wife of the prime minister of Bavaria Karin Seehofer, Kimberly Marteau Emerson – wife of the American ambassador, actress Uschi Glas, DJane Giulia Siegel, WAG Cathy Hummels. 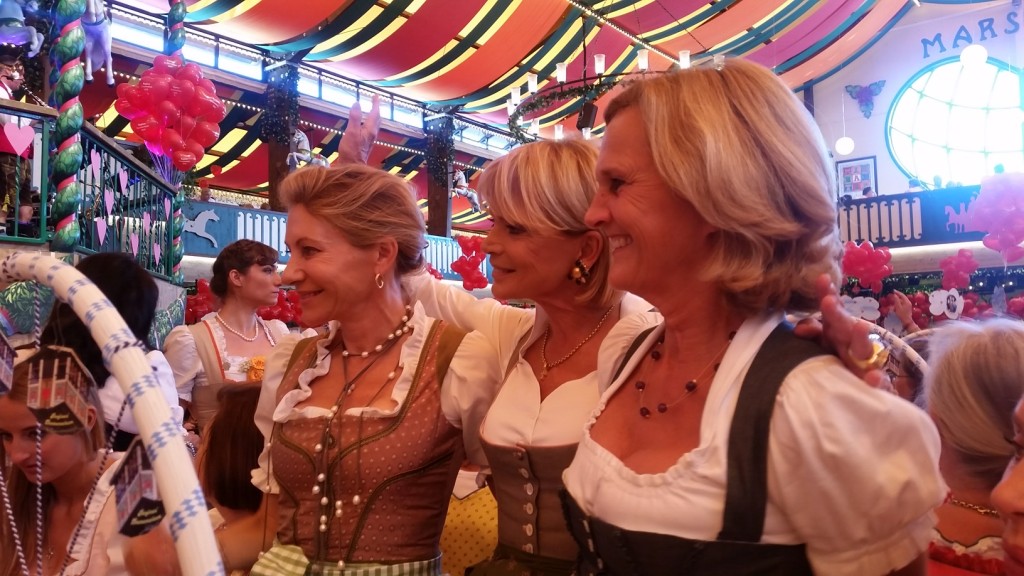 Regine Sixt promotes her charity ‘Tränchen Trocknen’ and asks to support the children’s aid foundation. I think it is remarkable how the active entrepreneur has been exceptionally committed for years now – and the success is impressive.
When finally hit-singer Roberto Blanco hit the stage and belted out his hit “Ein bisschen Spaß muss sein”, none of the exuberantly ladies remained on their seats any longer. Dirndls were presented in all sorts and colors: from traditional to really imaginative. Sometimes it is astonishing to which lengths some women got to get attention- not always flattering. After three hours of swaying to the music, feasting and donating, it was time to say goodbye. ‘Servus’ and ‘Pfiat di’ – see you next year! BvH 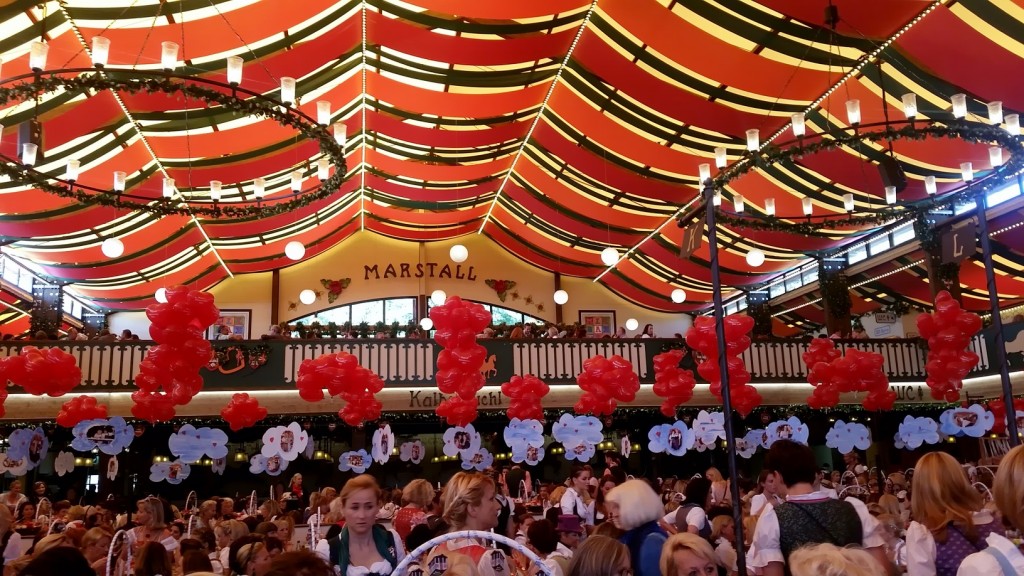 Who wore the most beautiful Dirndl? 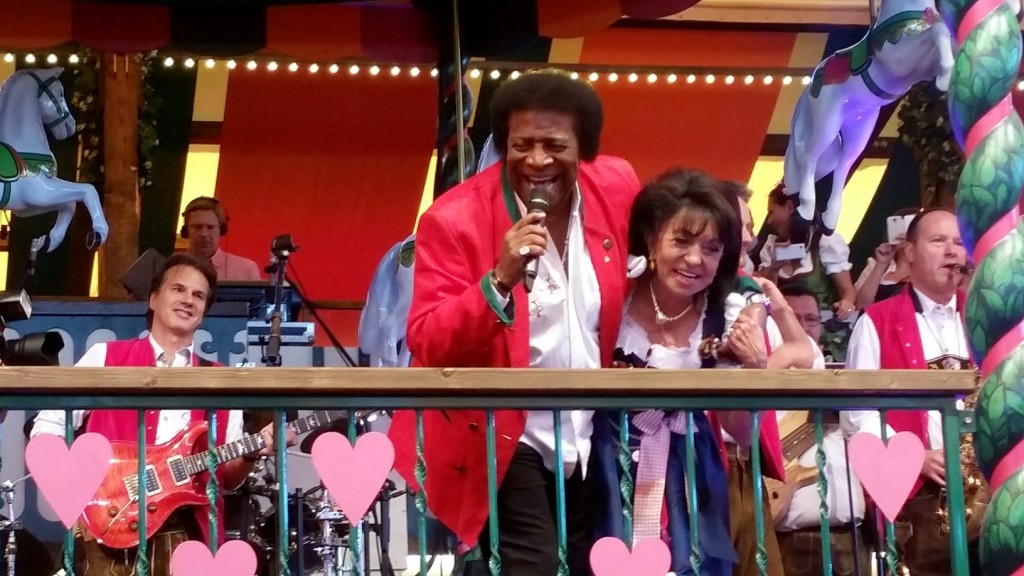 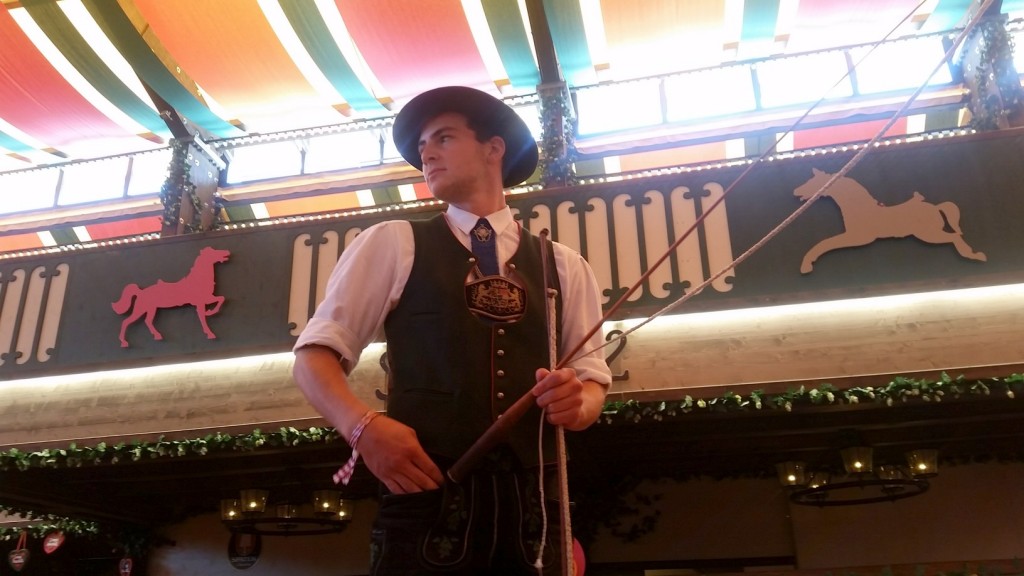 The man with the whip, who’ll soon flick the ‘belt’ to the rhythm of the music 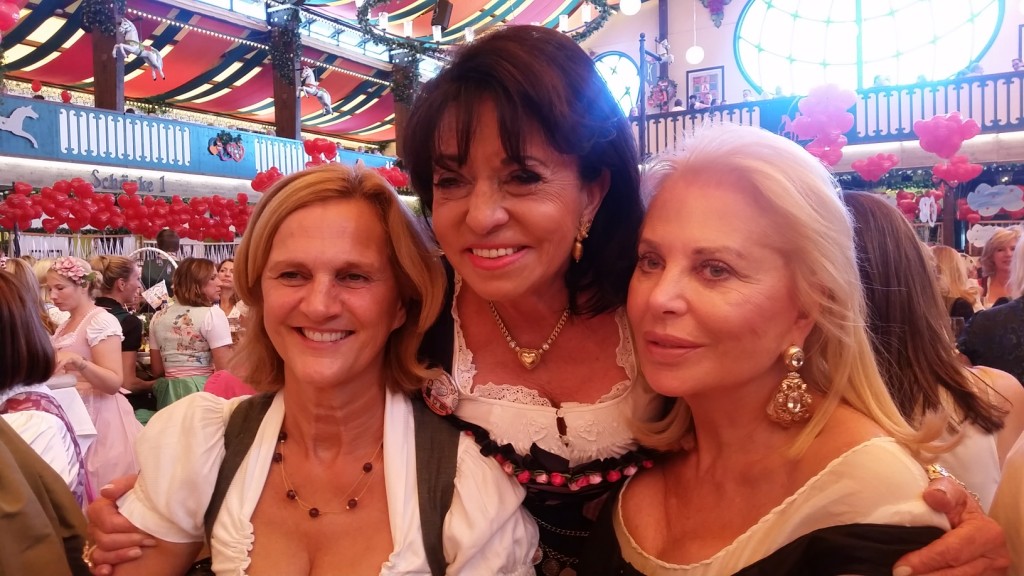 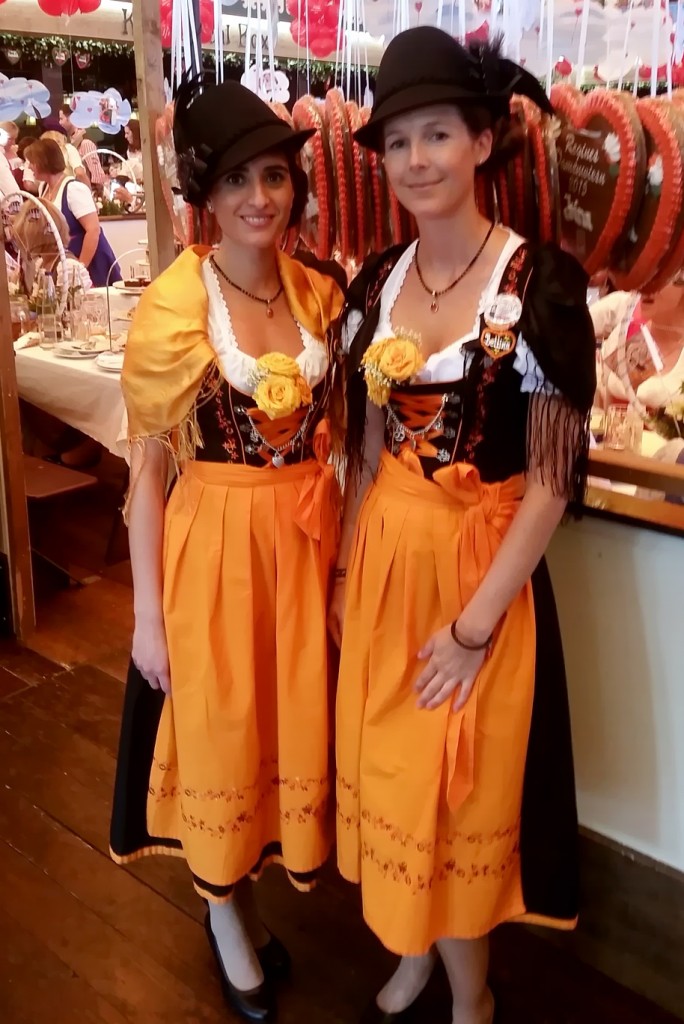 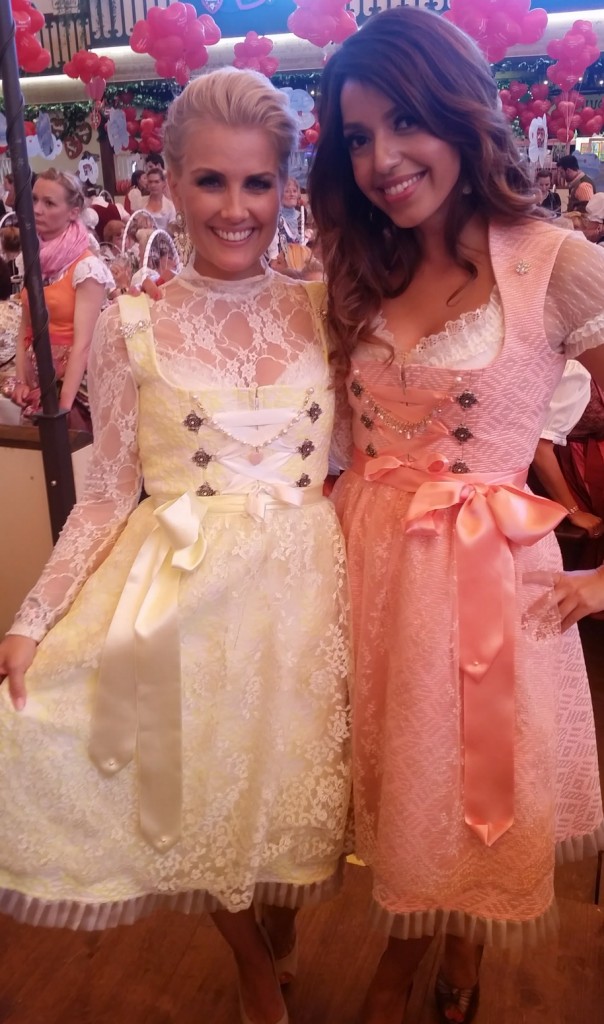 TV presenter Jennifer Knäble (left) with her dirndl designer Kathie Rezalou, who also designs for Franziska Knuppe. The native Persian sews her fantasy creations together with her mother 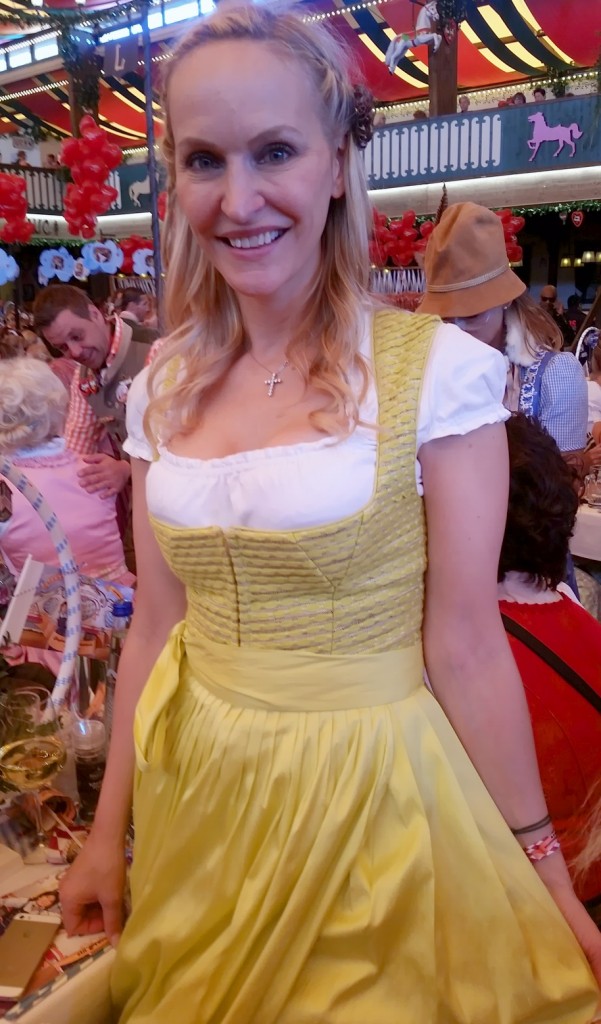 Gala editor-in-chief Anne Meyer-Minnemann wore a dirndl by Munich label OWLOON- who, like the name already suggests, have an owl as their logo. “This is my dirndl discovery of the year”, gushes the journalist, “jacket and dirndl are made from extraordinary fabrics and are coordinated beautifully. They are modern and don’t have anything in common with the so-called fantasy dirndls.” 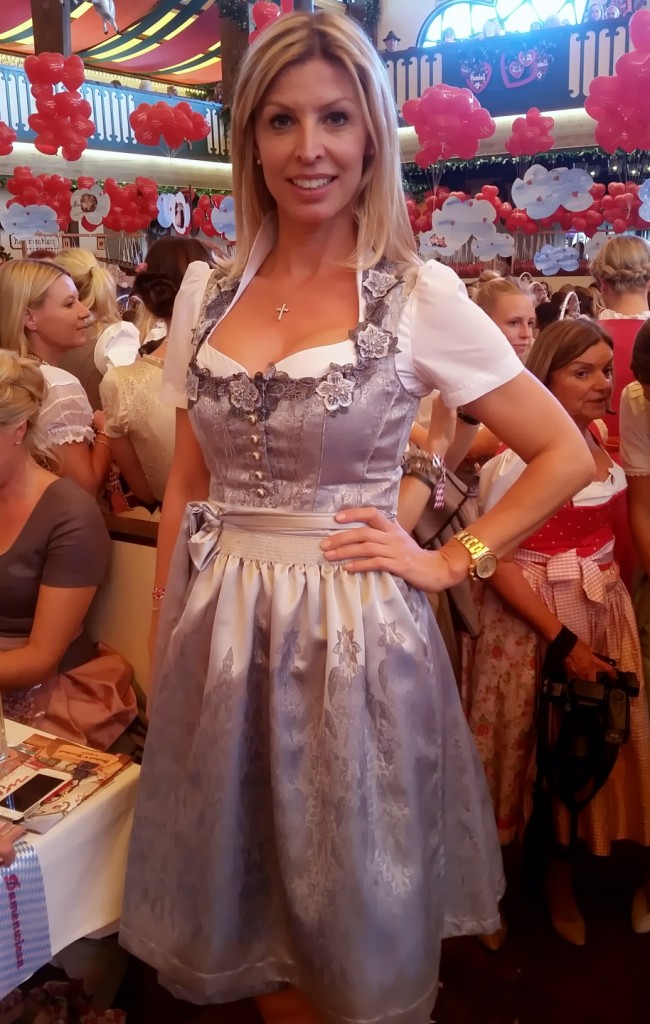 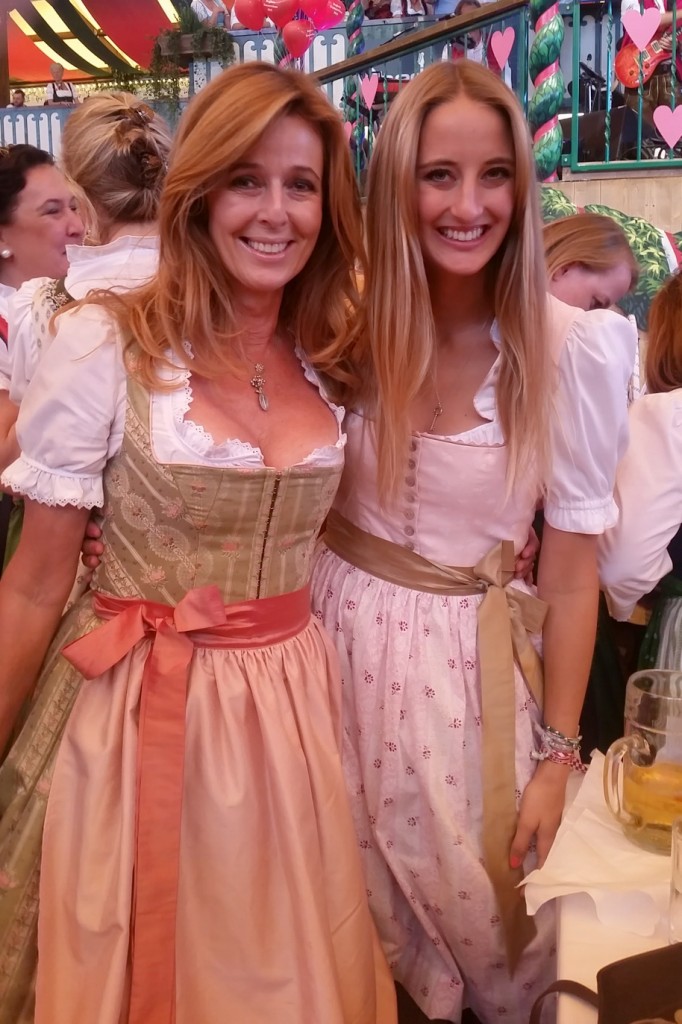 Beautiful in pastel: PR-Expert Andrea Schoeller and daughter Helena, both in dirndls by Sportalm 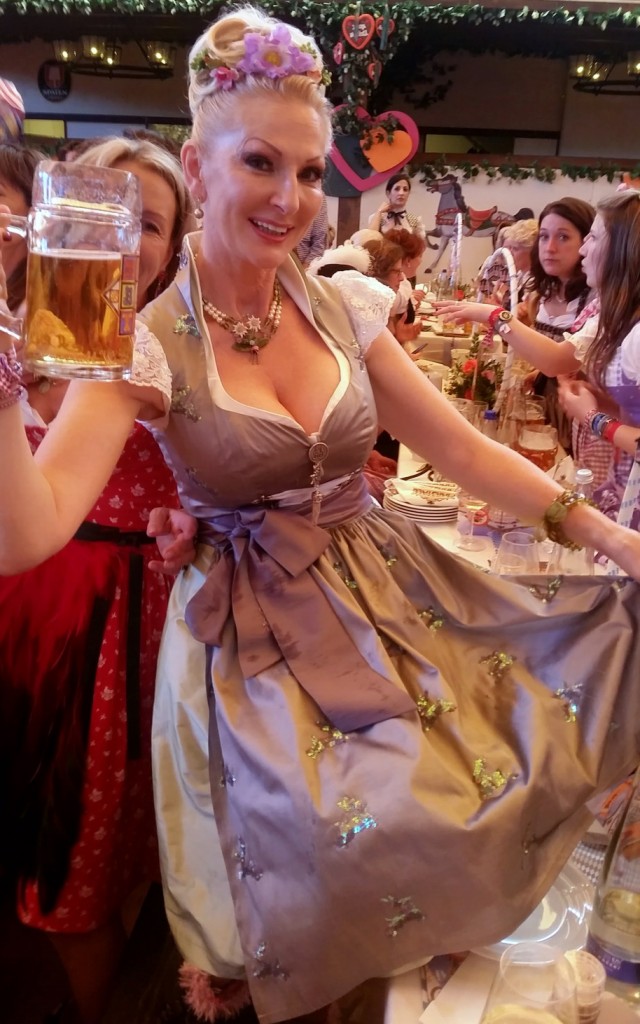 From the tv container straight to the ‘Wiesnzelt’: Entertainer Desiree Nick likes to wear custom-made dresses with a little bling by her tailor Astrid Soell from Regensburg. Power woman Nick tells me about her upcoming Christmas show at the ‘Berlin Theater’ on Kurfürstendamm. It never gets boring with her 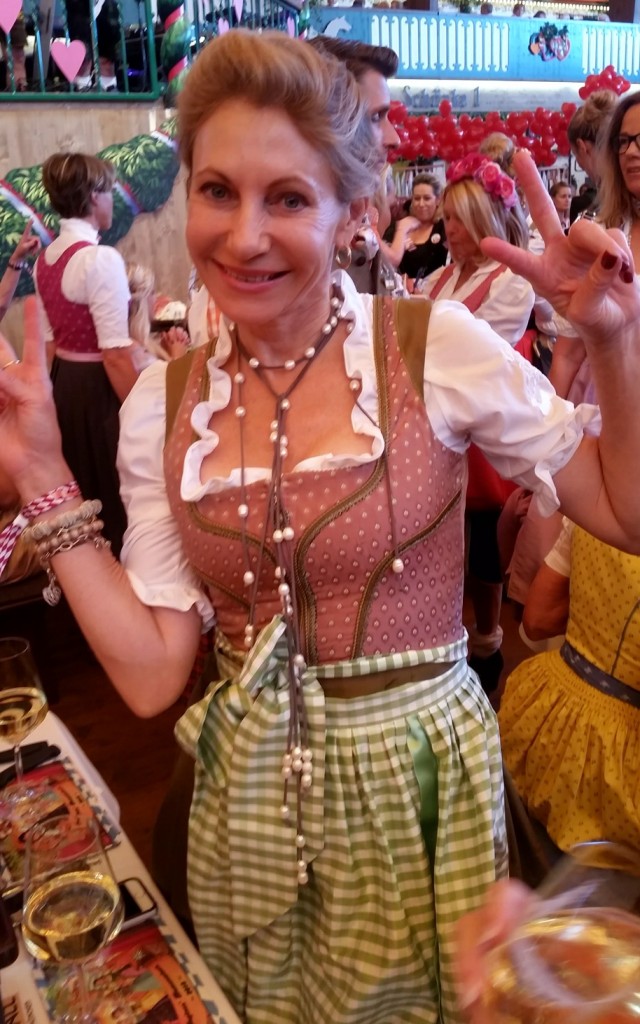 The wife of the US-ambassador Kimberly M. Emerson (Blouse and Dirndl by Lodenfrey) revealed that Regine Sixt dirndl designer has designed the apron especially for her. 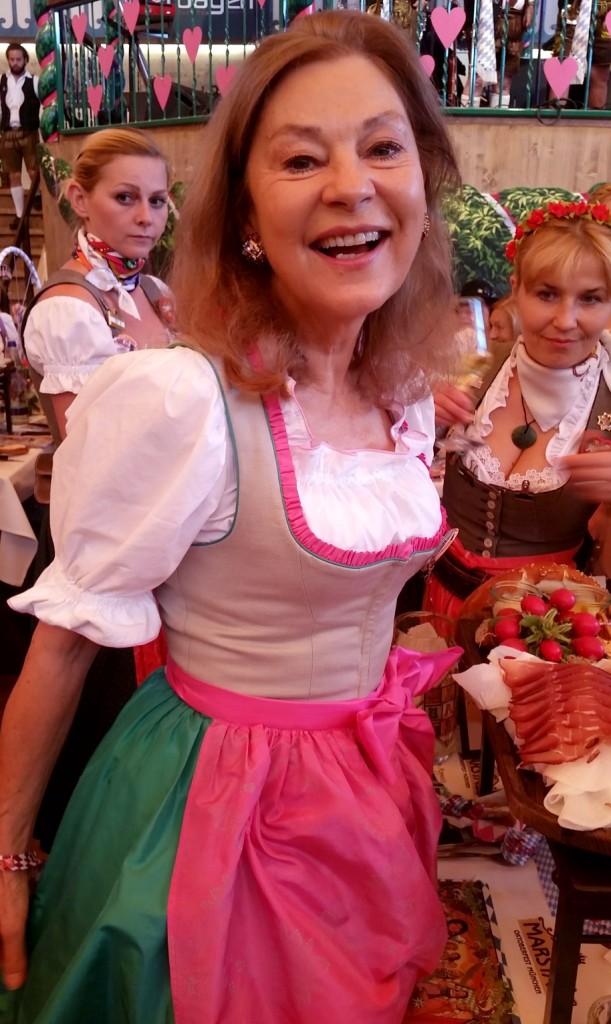 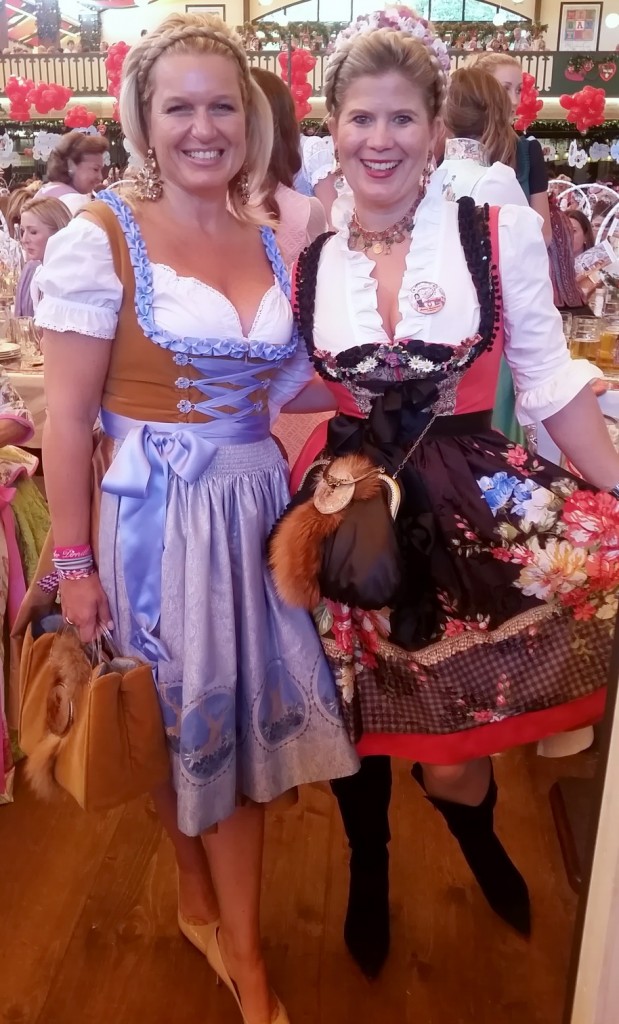 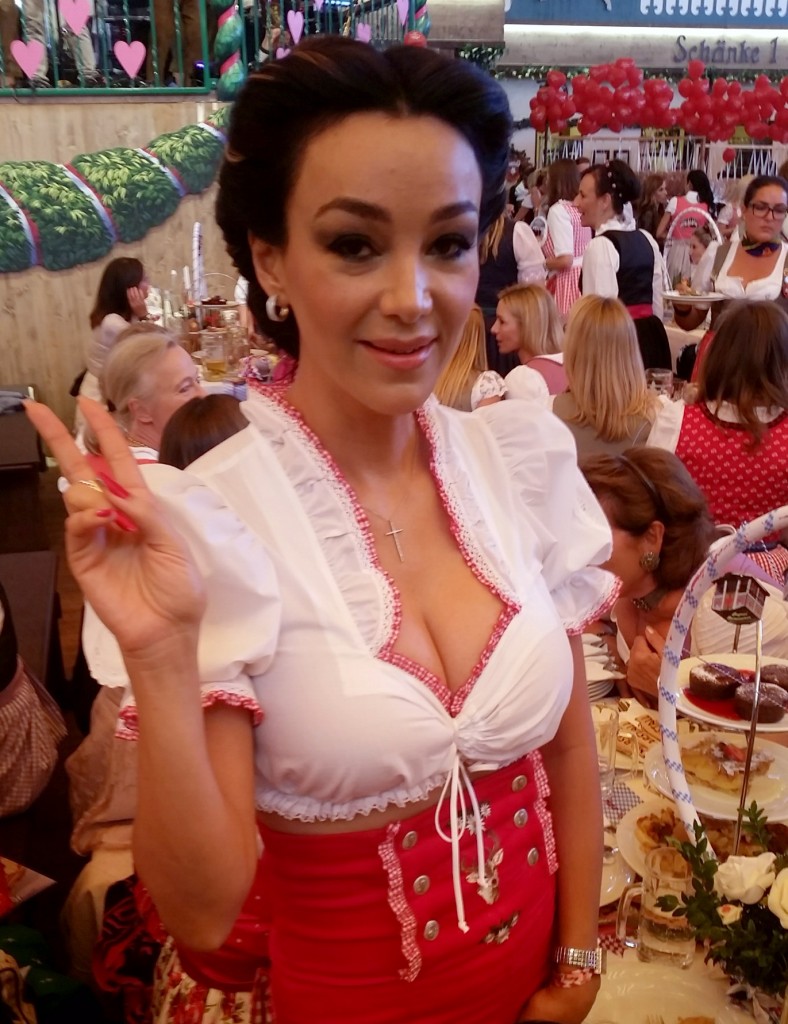 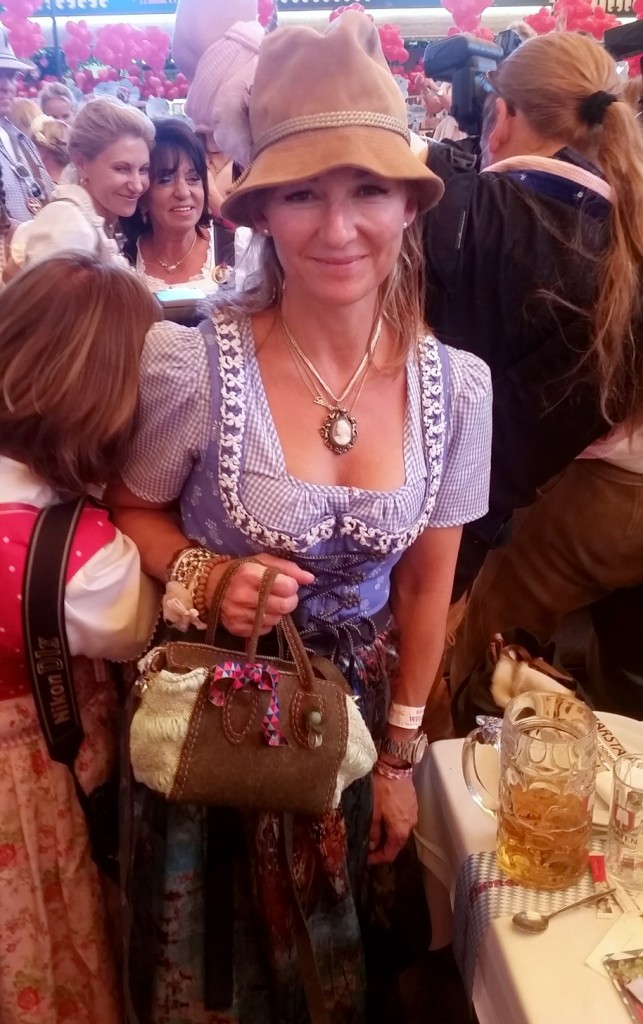 Wonderful: The Hamburg Andrea Brodtmann in an Angermaier dirndl and a handbag from her own collection 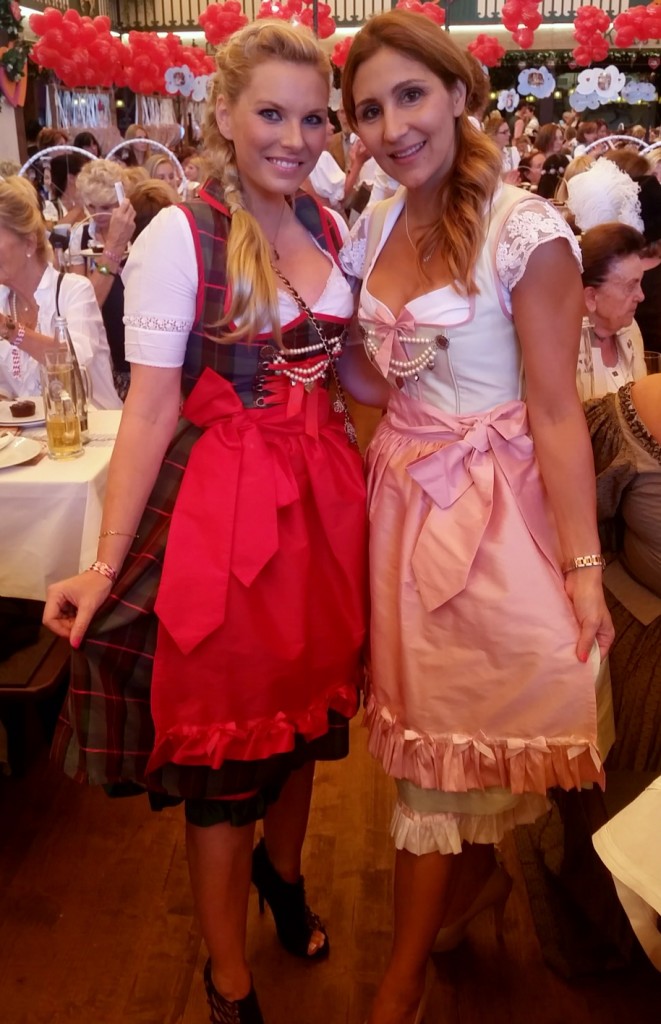 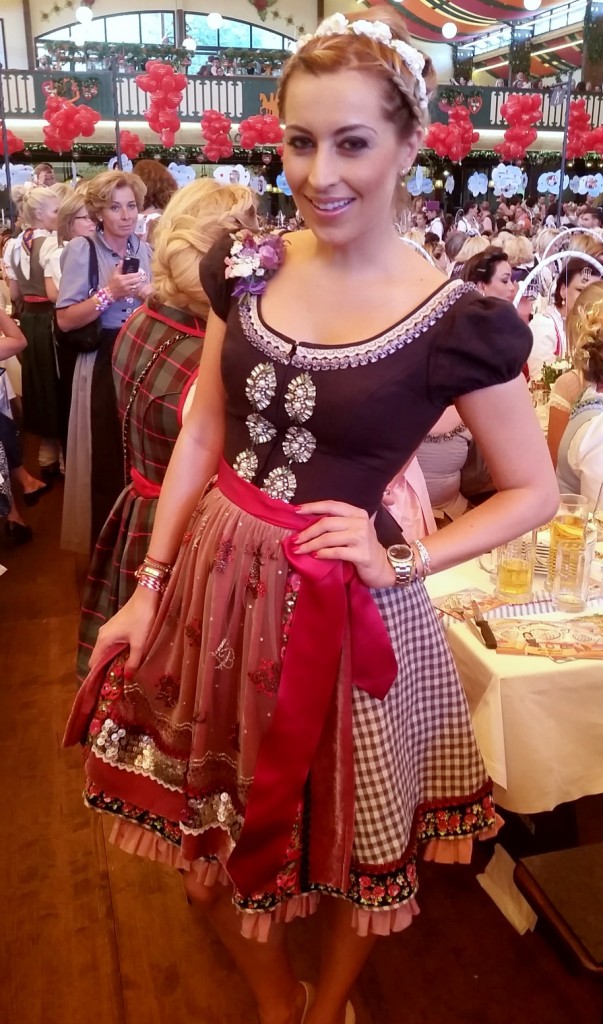 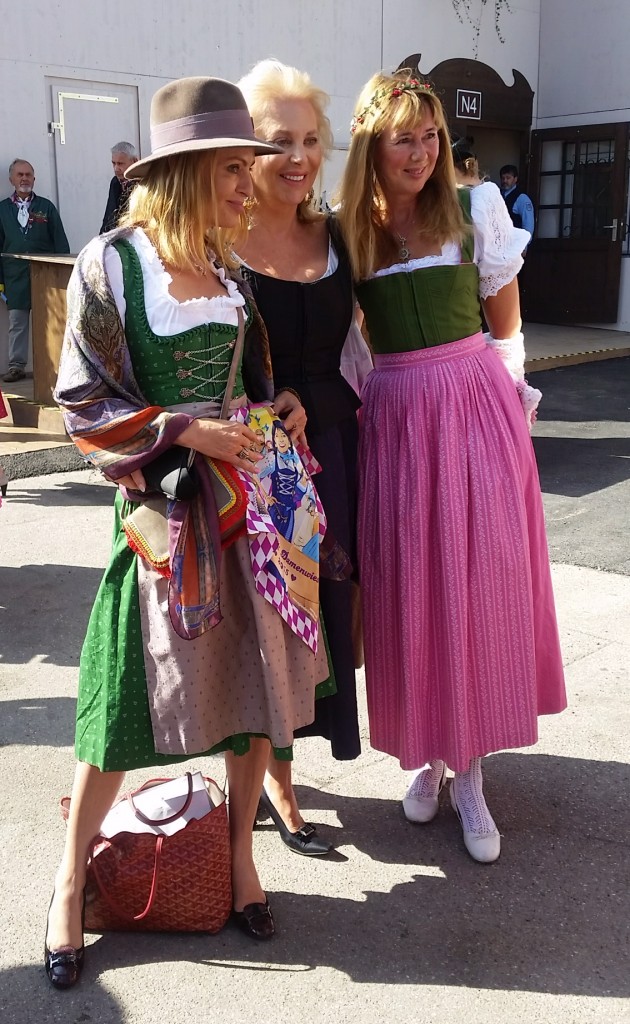 Hotelier Dr. Sigrid Streletzki (left) in a traditional dirndl by Gössl and a hat by Parisian milliner Céline Robert with Eva O’Neill and Maria Koteneva (right, dirndl by TM Trachtenmanufaktur) 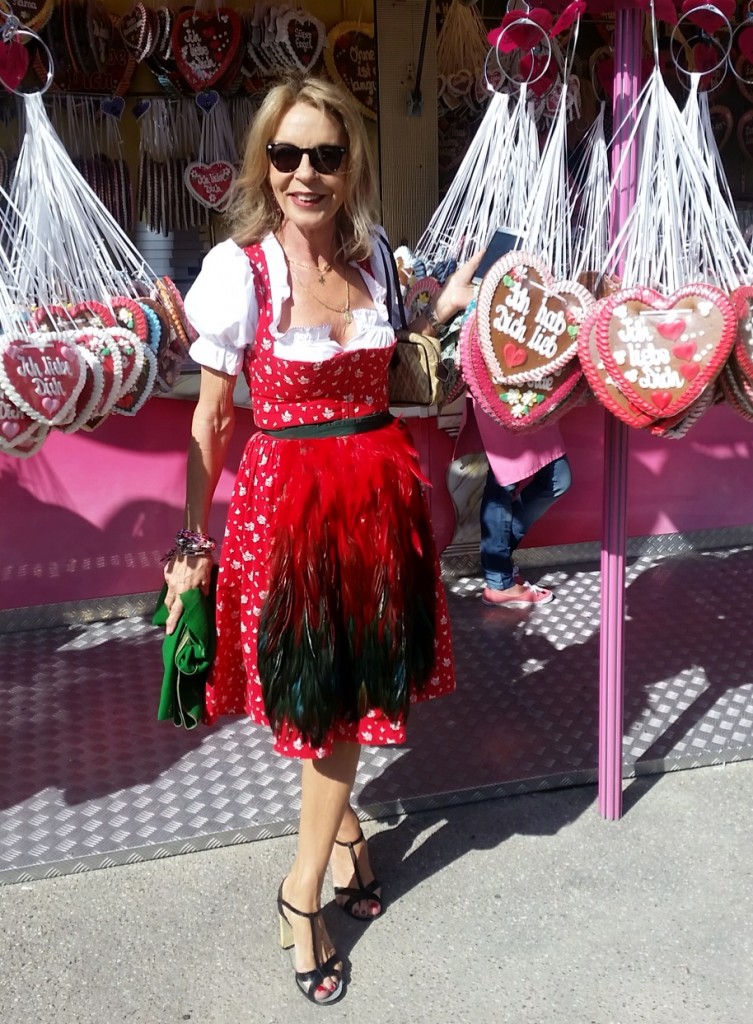 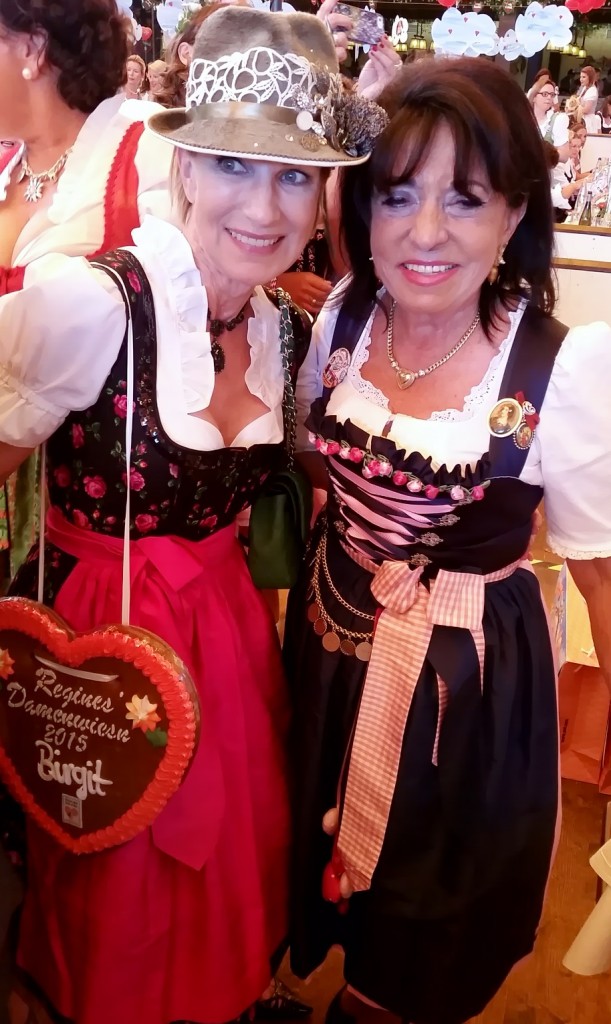 Hostess Regine Sixt, whose enterprise is located in 105 countries and I. Regine Sixt prefers a traditional Tegernseer costume, since she originates from this region 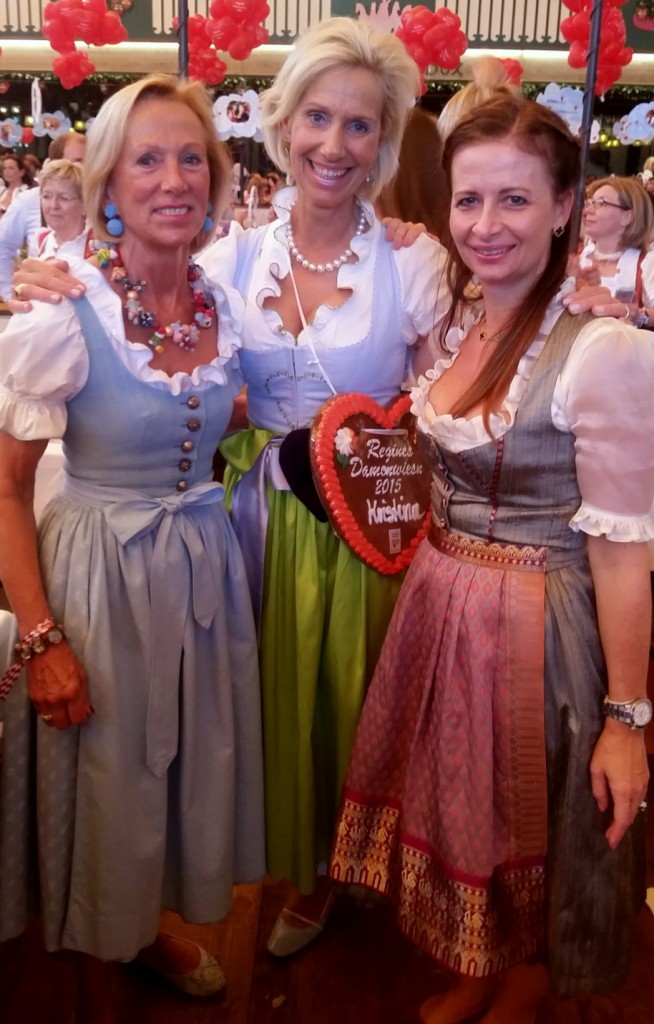 Entrepreneurs among themselves: Brigitte Klapp in a light blue Lanz creation (left), Kristina Tröger in a traditional Tegernseer constume and Christa Wünsche (right), who brought the fabric for her dirndl from Laos 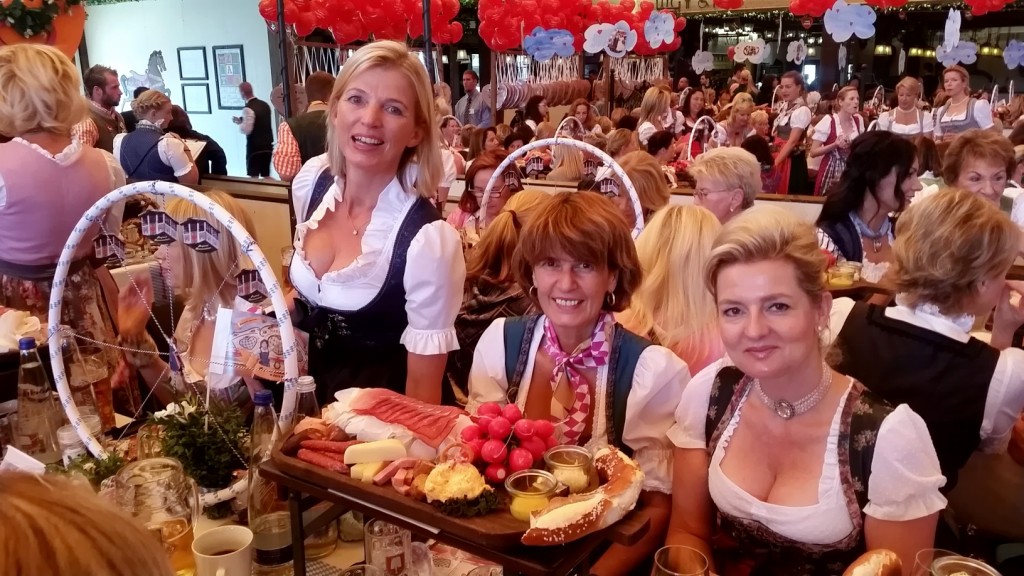 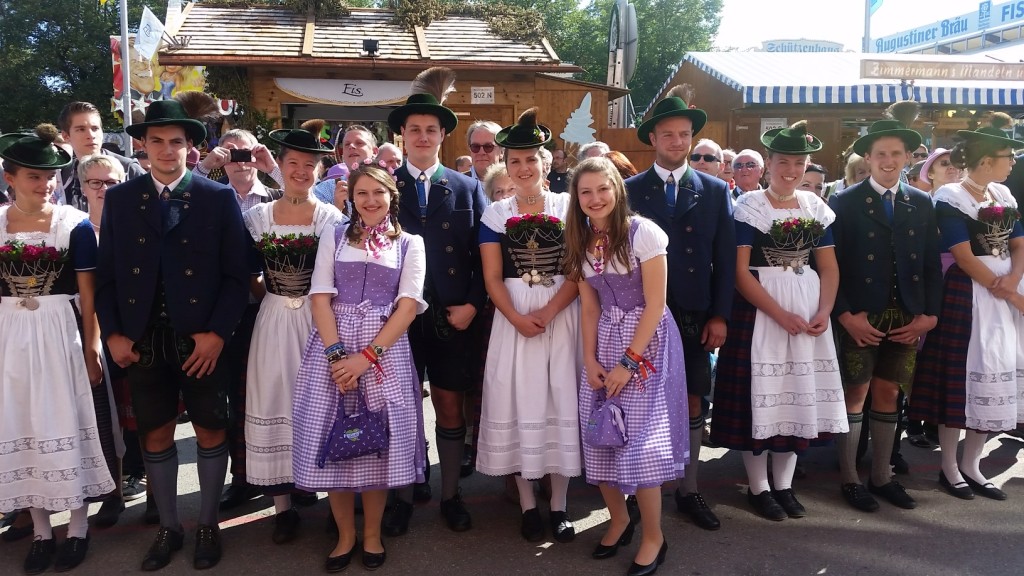 Sweet: The twin daughters of US ambassador Taylor and Hayley with Munich ‘Bubn’ and ‘Madl’ (boys and girls) in their costumes