Who: Klaus Wowereit, former Mayor of Berlin
Where: Berlin 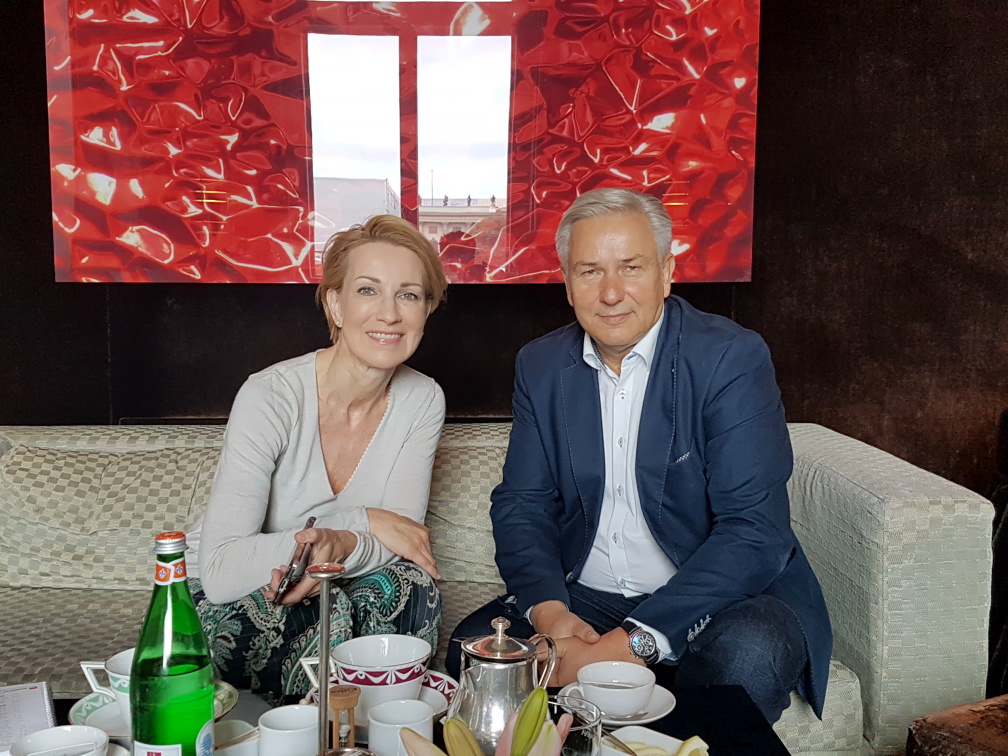 Meet me 4 Tea: Berlin’s former governor and I at the Hotel de Rome

For almost 14 years Klaus Wowereit was mayor of Berlin. I meet the former governor for a cup of tea at the Hotel de Rome. With bouncy steps and a quick saying to welcome me, he enters the lobby. For three years, the lawyer, who was born in Berlin and studied law, is no longer in office. Klaus Wowereit is, however, far away from being a pensioner. Although the sun-drenched hobby golf player has just returned from a 14-day Mallorca holiday.

“Having something to do is important to not rust.”

MyStylery: Klaus, in three months it’s Bundestag election and the SPD is currently in free fall. Can Martin Schulz win the election?
Klaus Wowereit: Yes, of course. His survey ratings climbed over 30 percent within a very short time and there were 17,000 new party entries.
MS: Nevertheless, the SPD has lost three provincial elections in a row. Was it a mistake to nominate Martin Schulz as chancellor candidate?
KW: Three lost provincial elections were quite tough. Martin Schulz still enjoys great sympathy.
MS: Apparently not enough to choose him.
KW: The initial hype is over, the question is what comes after. It is always more difficult for the challenger than for the incumbent.
MS: What advise would you give Martin Schulz?
KW: The most important thing is keeping the nerves together. Sharpen the SPD’s profile and focus on the righteousness. 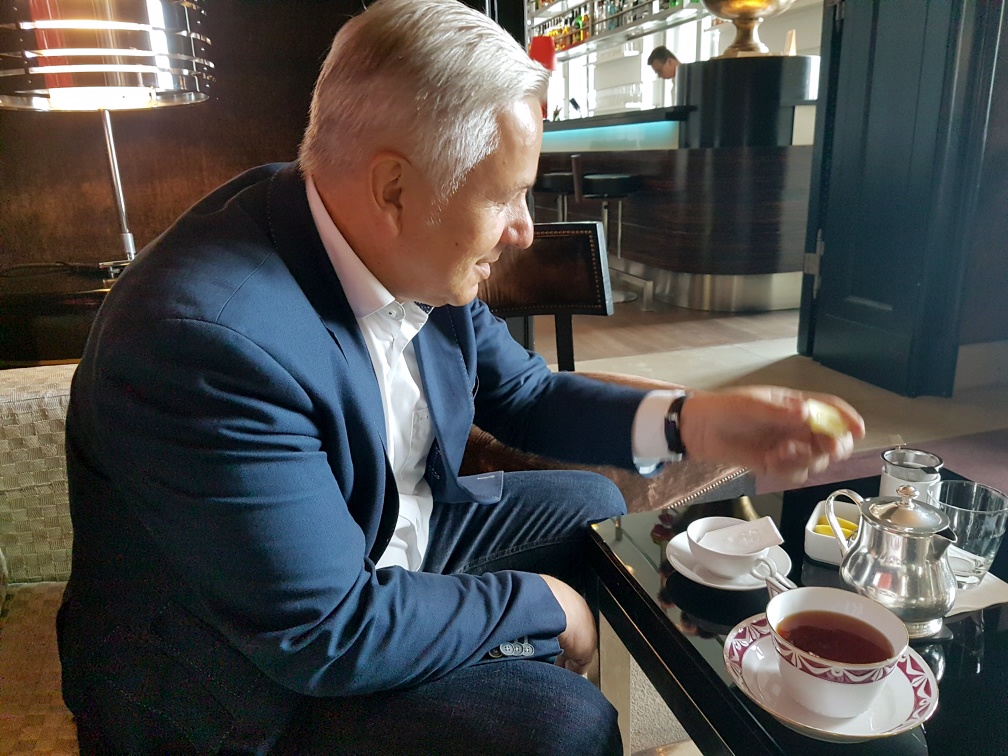 “What advise I would give Martin Schulz? Keeping the nerves together. Sharpen the SPD’s profile and focus on the righteousness.”

MS: Don’t you feel it in your fingers when you see all of this? Do you not want to get involved again?
KW: On one hand I think, thank God, you have nothing to do with it. On the other hand I would have liked to say something here.
MS: What exactly?
KW: Oh, I do not know now. My short-term memory. (Laughing). Beautiful cup by the way.
MS: This is KPM. Do you know that every cup of this colored Kurland series is unique and has been signed on the bottom?
KW: I also have a big KPM cup at home with my initials, a very nice piece. I really like Kurland. In my generation the so-called good service belonged to the good tone or the dowry, even in families with lower income. On wedding lists the bridal couple collected their new dishes. This seems to have been a little forgotten. Today pragmatism is more important. 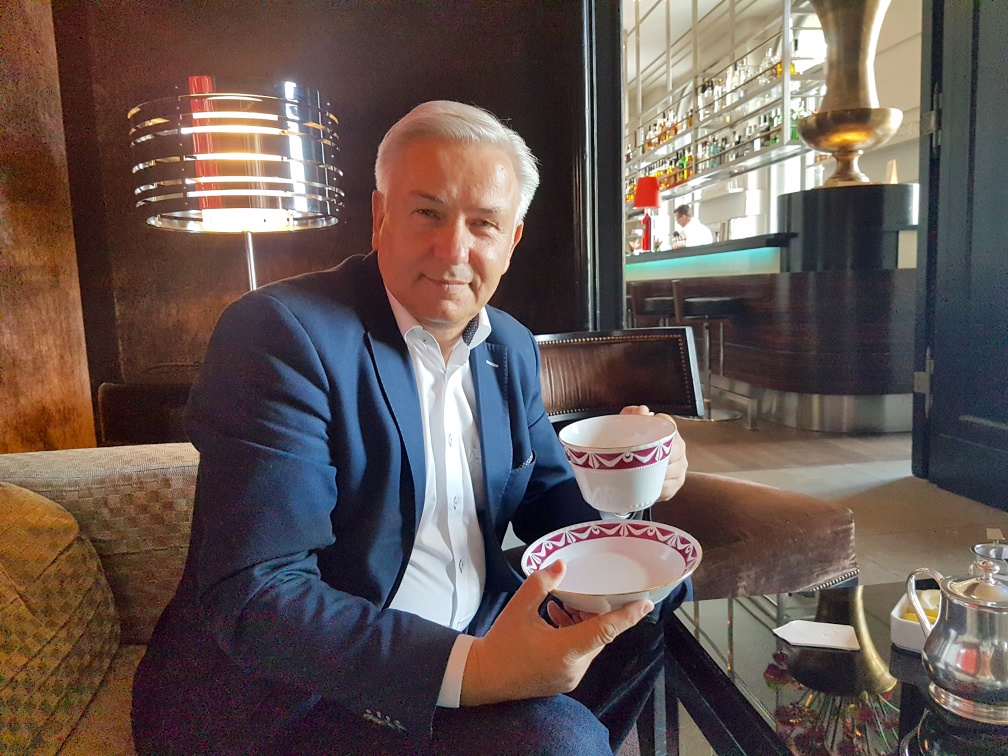 “KPM is a wonderful product and I find it remarkable with what historical awareness KPM boss Jörg Woltmann is engaged. Berlin can be very grateful.”

MS: Are you a tea drinker?
KW: Yes. Darjeeling tea, but also gladly Frisian blends.
MS: And you cook yourself?
KW: Yes, and I do not take tea bags, but loose tea leaves from the can. I remember this from times in Emden, where the tea is traditionally prepared differently, you drink it with candy and scooped cream. A special tea experience was a Hightea in Cape Town at the Hotel Mount Nelson. I like this combination of hearty toasts and sweet scones. Of course they should not be too hard, but with some Whipped Cream it always works. 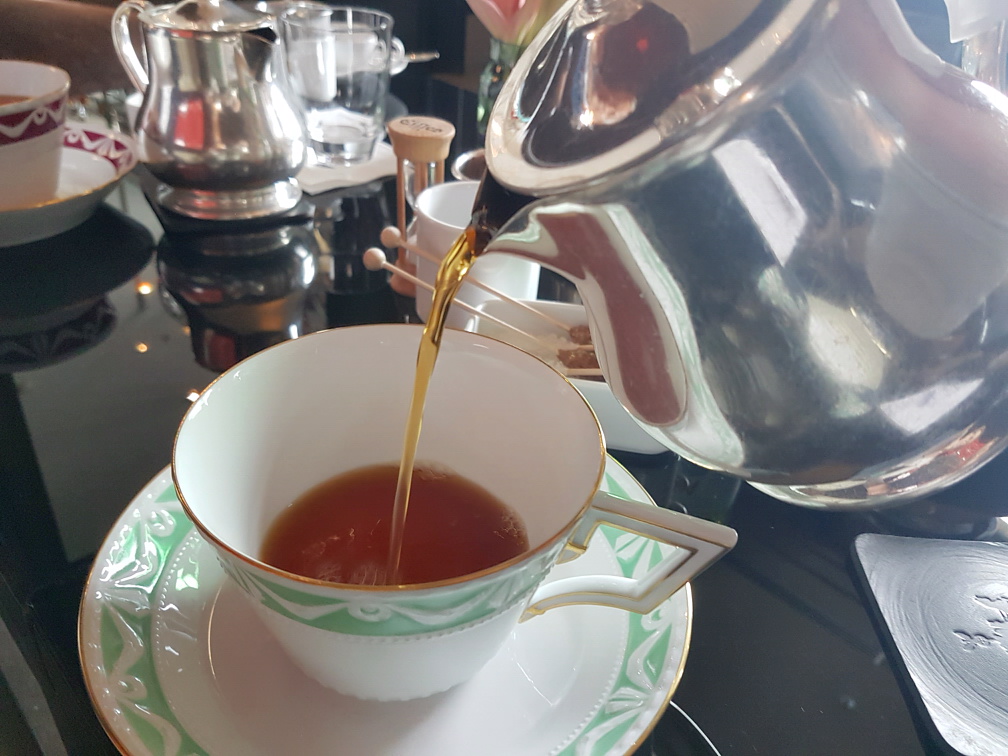 MS: It is your third year being a politician pensioner. What has changed compared to your previous life?
KW: I was completely busy in office hours. Came home at night, slept shortly, the next day early the first appointment and that seven days a week. After my resignation, this was suddenly different.
MS: Have you fallen into the infamous hole?
KW: I had the hope that it does not hit me. I enjoy to have lots of free time. But suddenly, leisure needs to be designed. It would have been wrong to say yes to all, just to avoid the emptiness. Just to be there for my husband and myself however would be too little, too. I am committed to the Berlin aid, I am in the presidency of the association Berlin merchants and currently conciliator in the tariff conflict between Euro- and Germanwings. I am happy about the trust. Nevertheless, I have to be careful not to fall into the old stress. Today I get up in the morning an hour later, take my time for breakfast and newspaper reading and go shopping.
MS: Are you the housekeeper now?
KW: No. This is alternating. We share the tasks. We both like cooking. However, not together. (Laughing). I am responsible for fish, poultry and roasts. Jörn makes the minced meat or goulash. 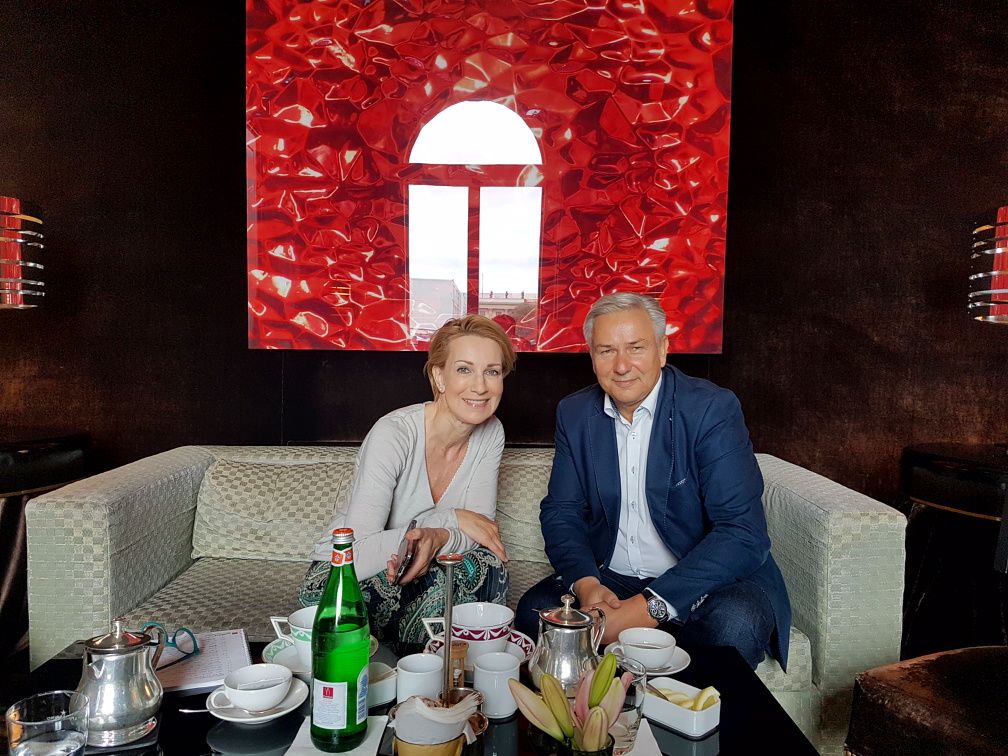 “Of course I’m talking about Jörn as my husband.” The doctor Jörn Kubicki and Klaus Wowereit have been a couple for 24 years, but unmarried

MS: Is Jörn annoyed that you are now so much at home and so very present?
KW: That does happen apparently. But no. He is happy about it.
MS: Mrs Merkel suddenly delights in the same-sex marriage. Are you married?
KW: No. This is only possible since 2001. We’ve known each other since 1993. Of course I’m talking about Jörn as my husband. Partner or life companion sounds silly.
MS: How has Berlin changed under your auspices?
KW: In Berlin, some efforts have long been considered as being unnecessary, independent of the society. According to the motto, the money is just going to come from somewhere. I wanted to change this attitude.

MS: The Berlin sentence you wrote is poor, but sexy …
KW: … still has a certain validity compared to other European capitals. However, Berlin has also grown enormously in economic development and has become international. The Place to be. For young people, for creative people.
MS: For you too?
KW: Absolutely. For me, Berlin is without any alternatives. I was born here and still feel very comfortable. I like the many niches, the uniqueness of the quarters, the so-called Kieze. There is something for everybody.
MS: You have been living in an old apartment in Berlin-Wilmersdorf for eleven years.
KW: I can do almost everything by foot, go to the butcher of my trust and know the baker, who bakes his bread himself. 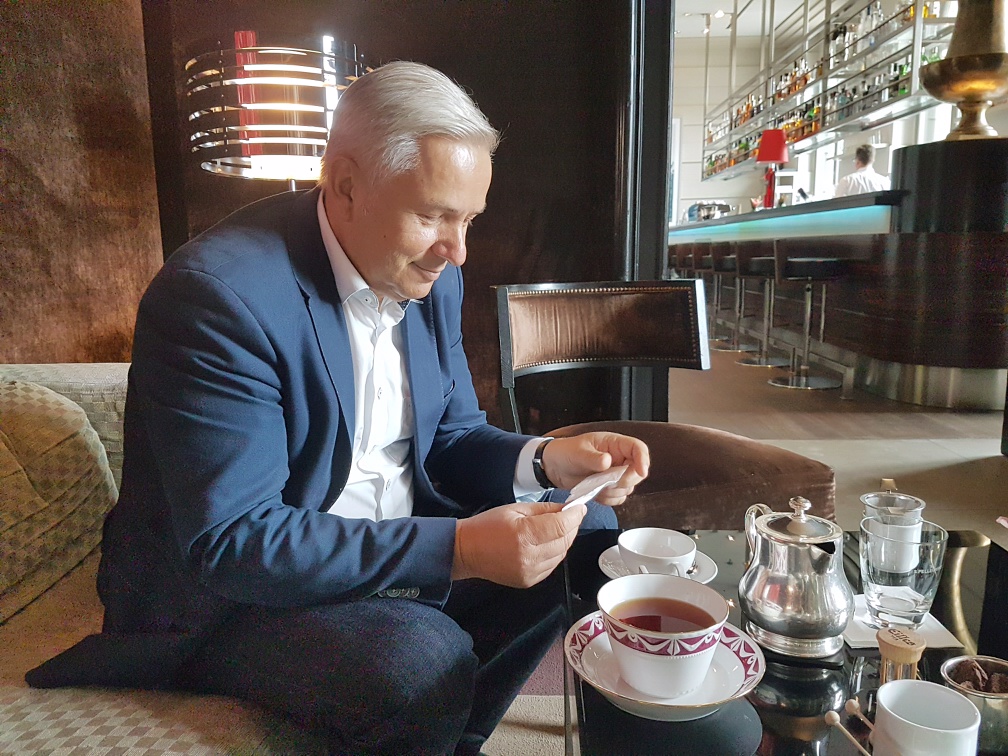 “The encounter with the Queen was already a highlight. I admire her calm, almost relaxed style and humor.”

MS: You met three US presidents during your term, George Bush, Bill Clinton and Barack Obama. Which was closest to you?
KW: Bill Clinton I spoke not only to in Berlin, but also in Vienna and New York. Once in a small round in a hunting hut in the Black Forest. That connects. You notice quite quickly when there is a common conversation.
MS: You’ve met the Queen several times. Does she welcome you with “Hello Mr. Wowereit”?
KW (laughs): When I saw her last at the British Ambassador, there was at least a recognition. The encounter with the Queen was already a highlight. I admire her calm, almost relaxed style and humor.
MS: What would you have done differently in retrospect?
KW: The increase in Kita contributions was an absolute mistake. Fortunately, they were completely abolished. 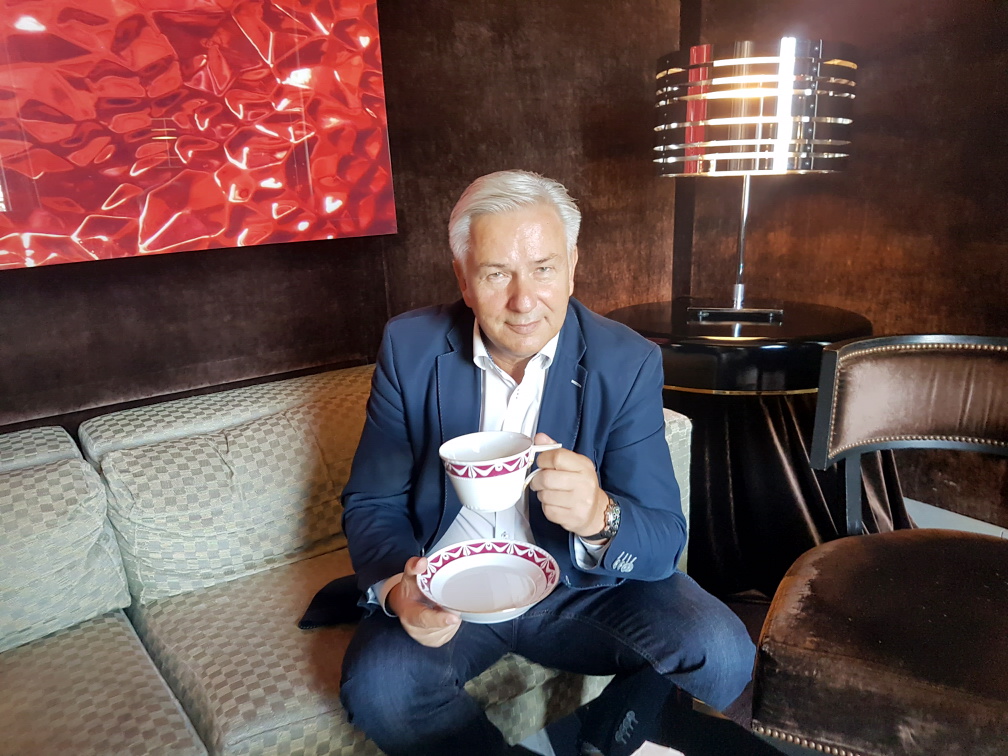 “I can easily understand that many people like Tegel so much. It is central but it is too small.”

MS: Speaking of Flops – are you looking forward to the opening of the BER?
KW: I make several crosses when this is finally brought to an end. The BER is still a point that makes me very angry.
MS: Do you believe in the opening in 2018?
KW: I have stopped making forecasts.
MS: As the Chairman of the Supervisory Board of the BER, you were quite under fire: you were to blame for everything.
KW: I was the figurehead, who could be scolded, but I was not responsible alone, just because others ran away from it. It was a hard time.
MS: The airport is already considered too small and obsolete. Demolish and rebuild are new demands.
KW: The BER is a huge success of the airport company.

MS: What? Do I hear irony?
KW: No. On the contrary. The passenger volume has increased to 30 million passengers per year. In 2001 it was not even ten million. When the BER was planned in 1996, it was regarded as too big.
MS: Today you know that the BER cannot cope with 30 million passengers. Do you also like flying from Tegel?
KW (laughs): But now please do not ask such questions. I can easily understand that many people like Tegel so much. It is central but it is too small.
MS: The BER is at the end of the world.
KW: Oh, that is again this West Berlin kind of view.
MS: I live in the East …
KW: Look at how far the Munich airport is from the city center or the airports of other European cities.
MS: But there is the citizenship decision. Would it not be time to listen to what people want?
KW: That is a very emotional question. But it is the facts, the legal situation, which the FDP does not go past. 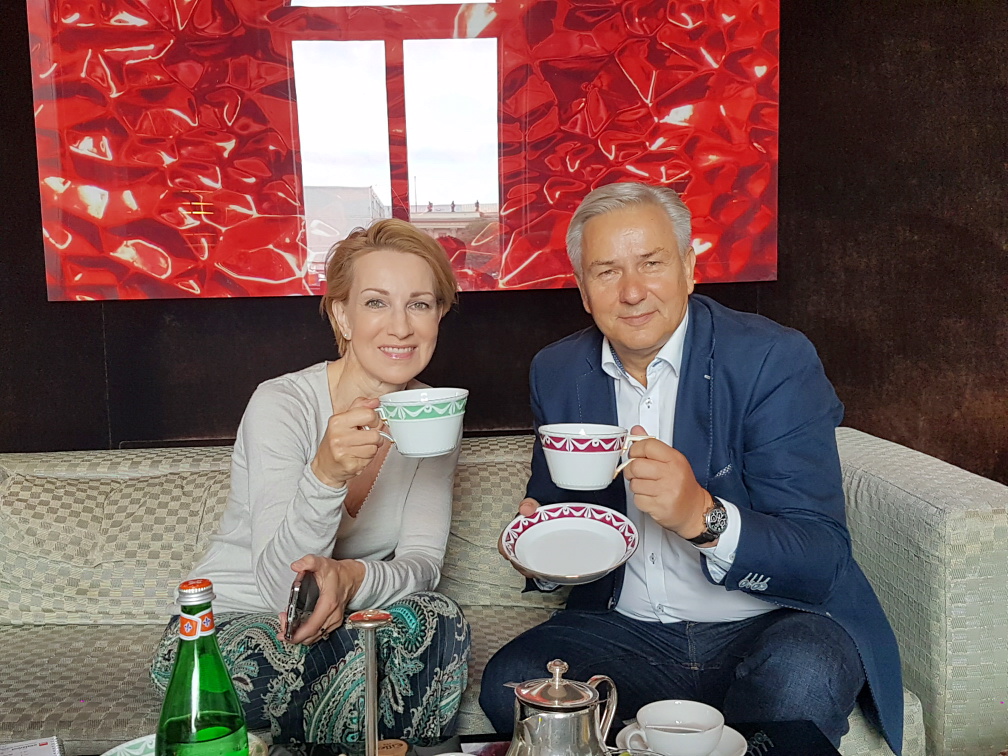 Klaus Wowereit: “Today I am happy that I can choose what I am doing and then enjoy it. There is no longer a need for it. I like to go to theater or opera premieres, to which I am still invited.”

MS: Regardless of the airport you are departing from: Where do you want to travel?
KW: For a longer tour to Australia and New Zealand. We like city travels, lastly we were in Budapest and Vienna. Next we go to Iceland.
MS: You had the nickname Party-master as a governor. Did that bother you?
KW: Yes, because it was meant to be defamatory. Not every reception is a party just because you hold a glass in your hand. Bambi awards or Berlinale are part of the job, and for the Governing Mayor, this is often the duty, on which I had given speeches and had to be approachable.

Not every reception is a party

MS: How did you deal with insults?
KW: It is difficult to avoid any hurt in political positions. If you are affected, however, it feels different again. The worst is for the personal environment, family and friends. I’ve grown over the years with a thick coat and insults come not too close to me. Politicians always want to be loved.
MS: If you go through the city today, the people greet you with Mr. Mayor.
KW: Right. And that pleases me. If they say that I am missing, it is nice to hear. I can be very satisfied with my professional life. Not many people can make their hobby a profession. BvH 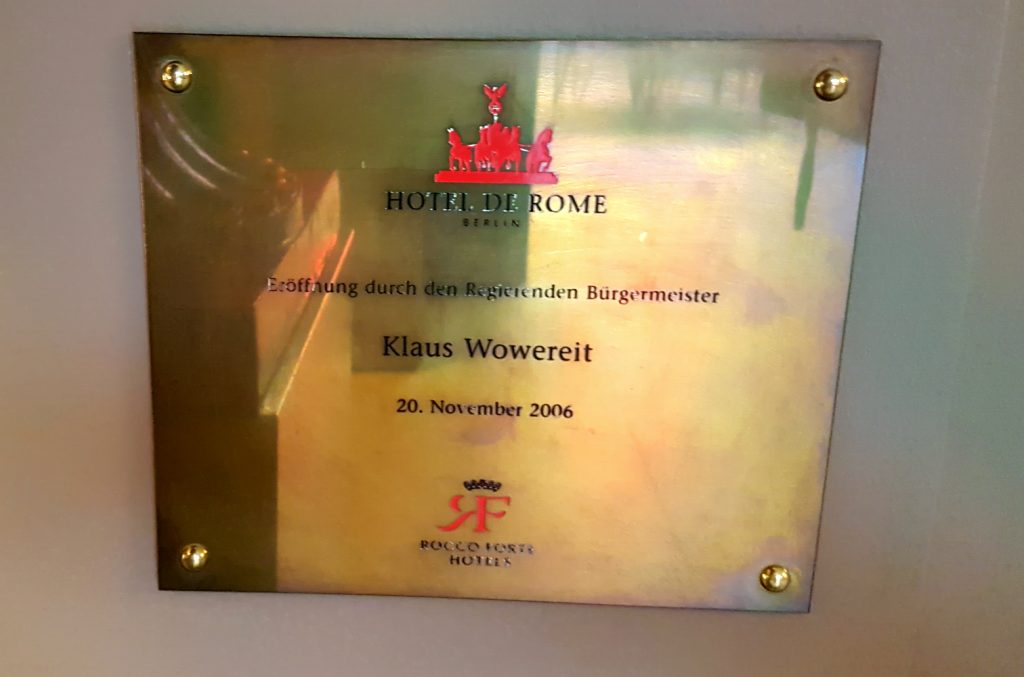 11 years ago, Klaus Wowereit opened the Hotel de Rome in Berlin as a Governing Mayor. Here we met for our “Meet me 4 Tea” interview

The interview series “Meet me 4 Tea” is sponsored by KPM – Königliche Porzellan-Manufaktur.