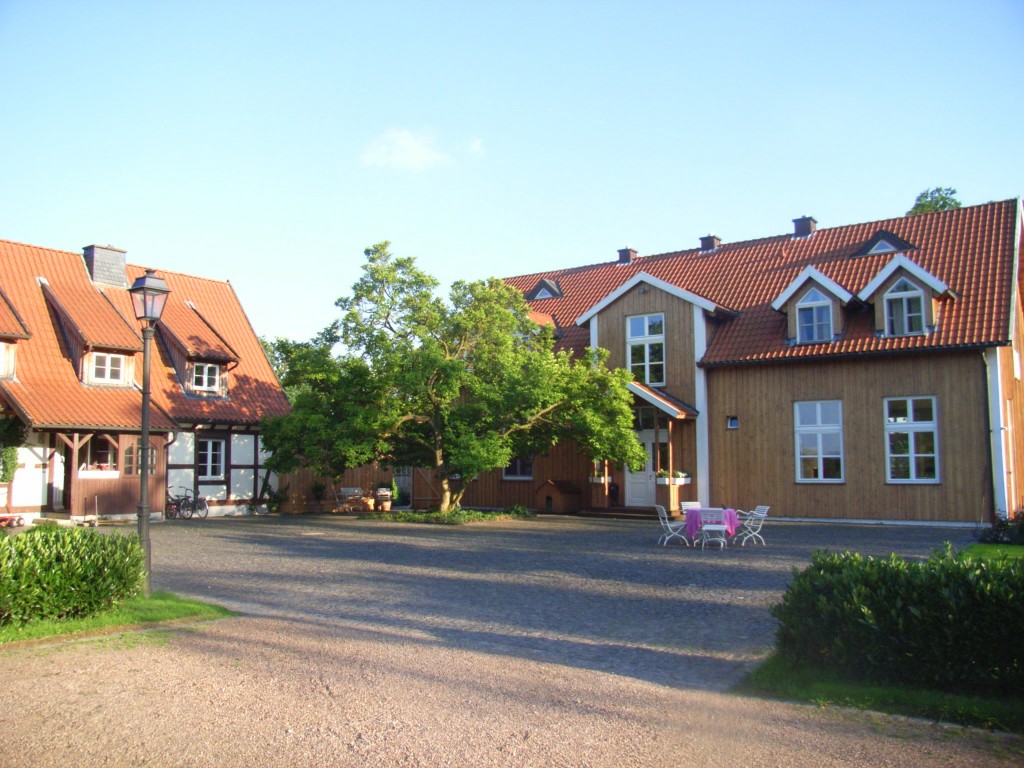 So what are you currently doing, am I asking Anna von Mangoldt, when we first sit together. “I’m doing colors” she says and laughs. Colors? I’m spontaneously thinking of pens and wax crayons. But Anna develops colors for everything that needs a new painting, whether for a house, a wall or a chair. “I remember colors. If I see a special pink, I’m able to re-mix it later on.” 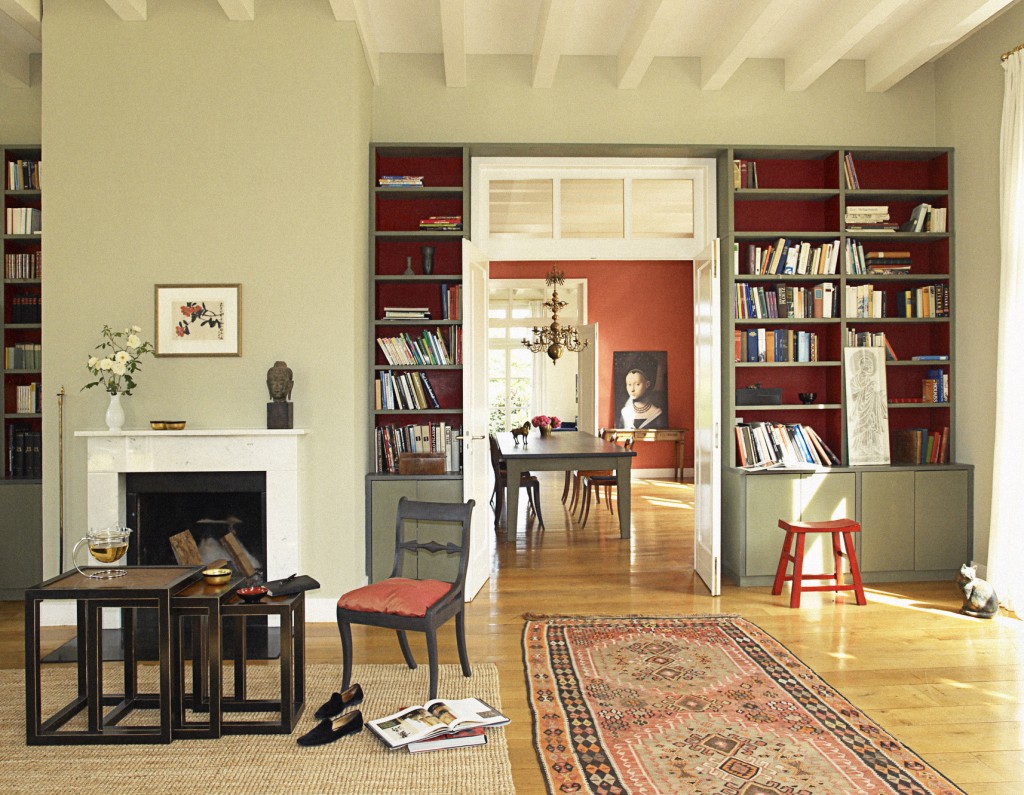 View from the living- into the dining room. “Color is a great product. You can paint an entire house or a single chair. And there is always something new out of it. “

She adopted the technique of mixing colors by herself. A gift she apparently got since birth. Anna’s mother Christina is a passionate interior designer who always made her family a beautiful home – even in Sao Paulo, Anna’s town of birth, in which her father was working and where the family lived for a couple of years. 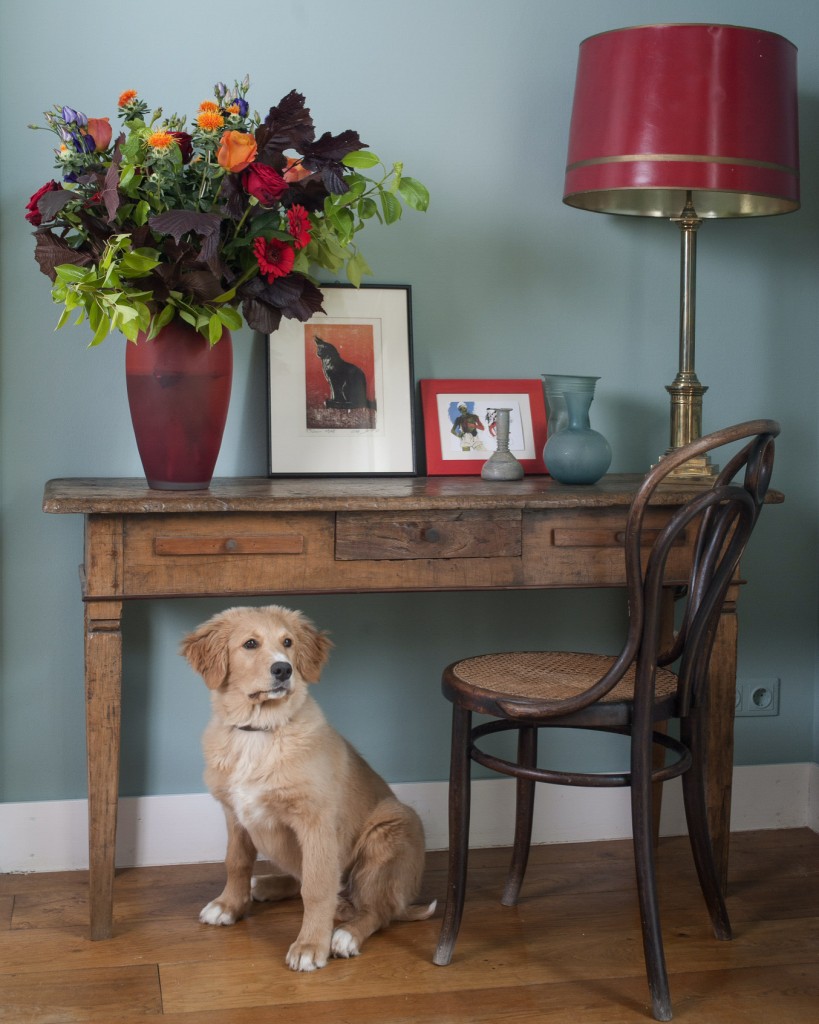 “A blue painted room with orange flowers, I think this is a great combination.”

But it wasn’t an easy way from her talent to create colors up to her own factory.
With her four siblings – Anna is the oldest – she grew up in an estate in the Eastern Westphalia – idyllic between horses, cows, dogs and cats. “A life like in Bullerbü, that really characterised me”, tells Anna passionately. 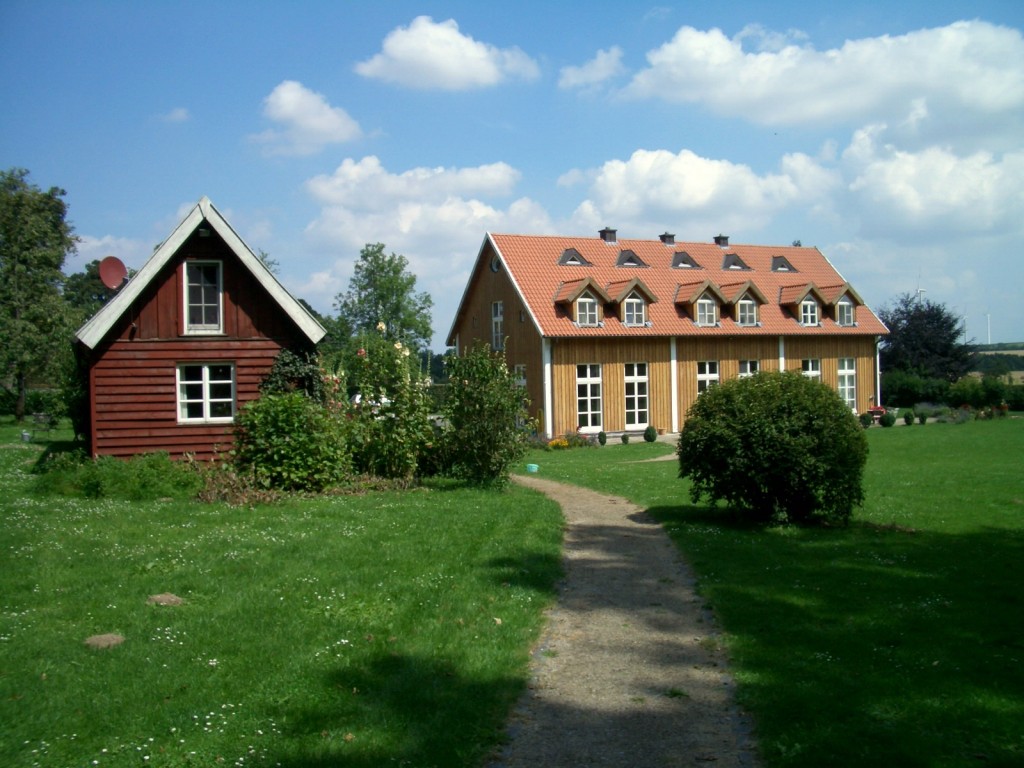 “I had a childhood like in Bullerbü”, Anna von Mangoldt describes her life in the countryside at her parents’ home

After her Abitur at Salem she went to Brazil, her country of birth, for one year to learn Portuguese. She, who always had an interest for politics, came back with the knowledge neither to become a diplomat nor an accountant. Instead her way leaded her to England, where she studied History and Art-History for three years and was also part time working for the British color-designer and book-author Annie Sloan. “Suddenly my life was all about colors”, describes Anna her student life. “It was though but also spurred. I was in a creative intoxication, because back home there wasn’t one piece of furniture that wasn’t painted as well.” 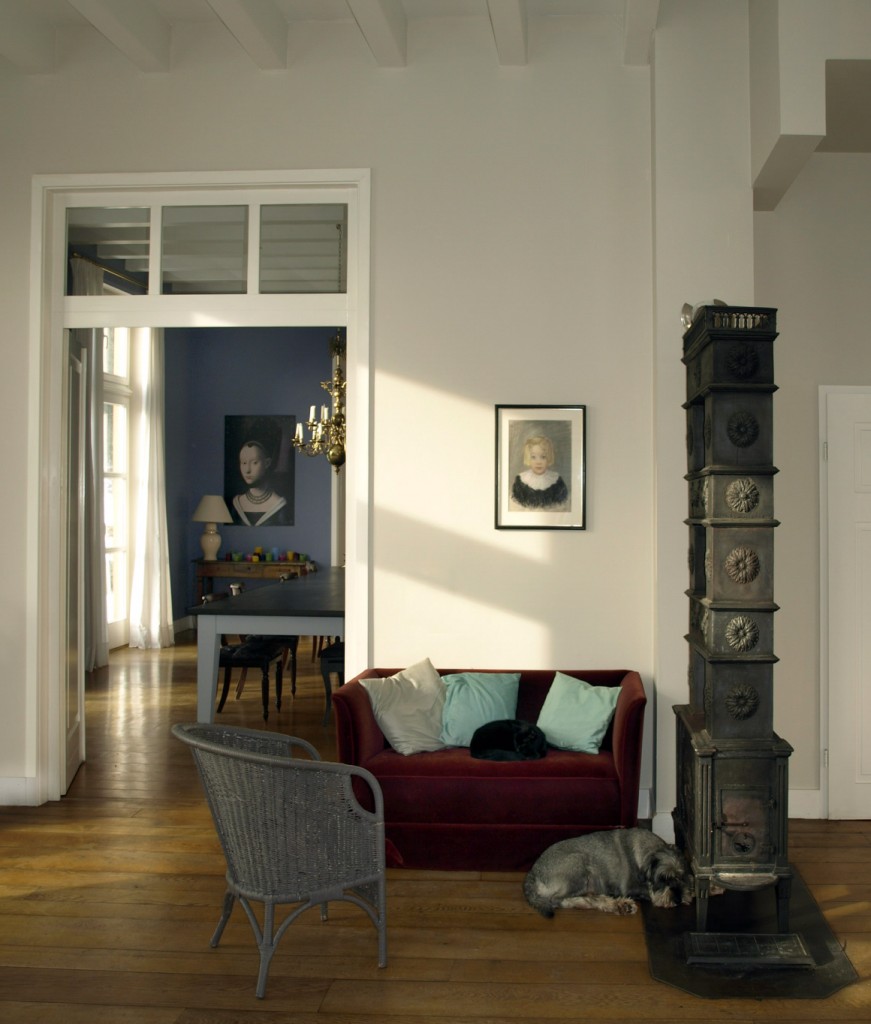 Family dog Juno cuddles by the stove in the kitchen

Colors change the sense of space 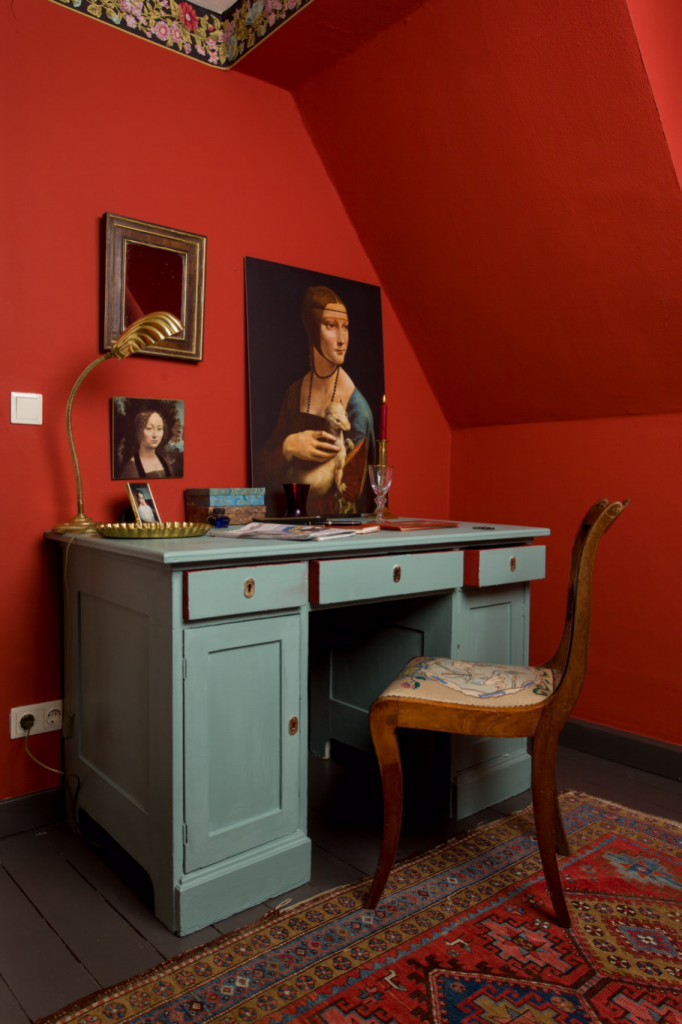 Anna was so enthusiastic about English colors that she decided to distribute them in Germany. At this stage she was 23 years old and had a thirst of action. It wouldn’t have worked out without the support of her family – especially the engagement of her mother Christina – Anna points out, who still appreciates the help. 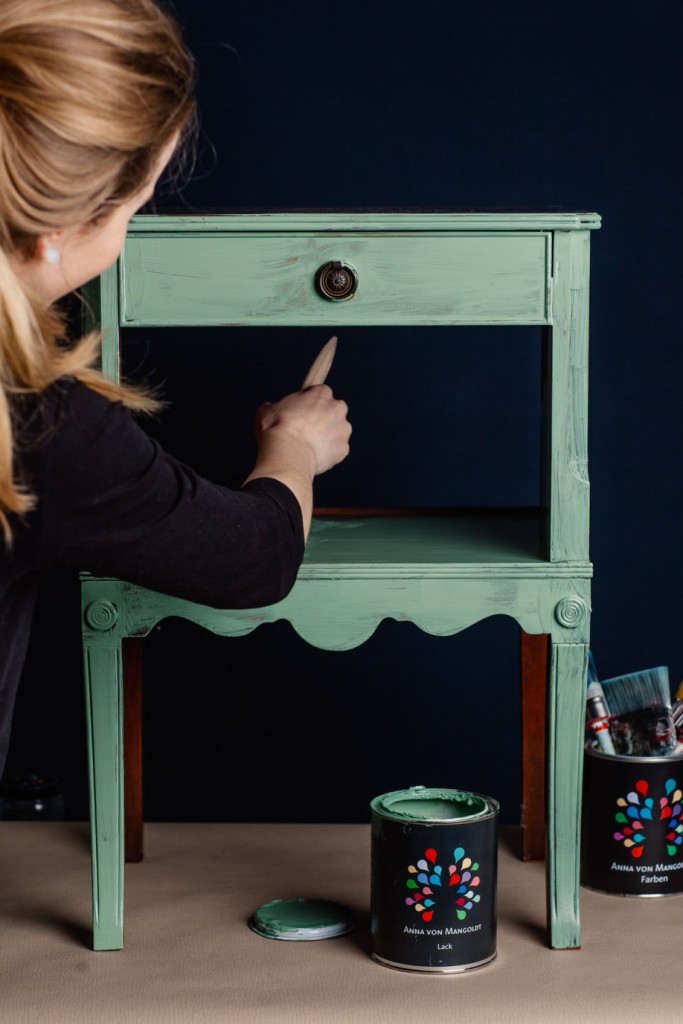 “Only marketing does not work,” says Anna, “I have to stay in practice.” … And therefore picks up the paintbrush herself

On Christmas markets such as at Gut Böckel and exhibitions like “Home and Garden” she presented her products, until the press became aware of the beautiful noblewoman with the blond hair and blue eyes. “That was the breakthrough”, Anna gladly says. 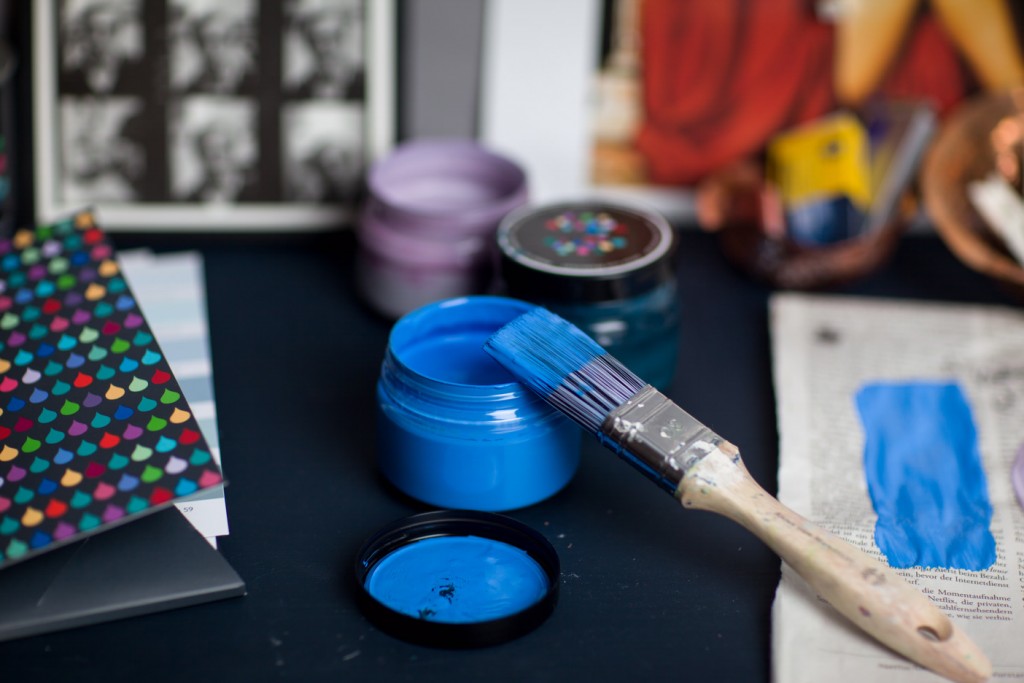 The color emulsions have an extraordinary depth and luminosity. Due to their high pigment density and the matte, velvety surface they reflect the light in a unique way

The first big order came 2009 from a castle in Westphalia, where Anna firstly designed the horse stable with color and later on also the private rooms. Almost a year later she published her own first color collection, which she mixed together with a Belgian manufacturer in her production in Warburg. Since 2013 she’s cooperating with a German manufacturer and expands her network of her trading partners, so that the colors are Germany-wide obtainable and not only via her online store. “I learned that I couldn’t look after everything. Mixing colors, brand development, expansion of the range of products. One has to be able to delegate. Otherwise one’s getting routine-blinded.” 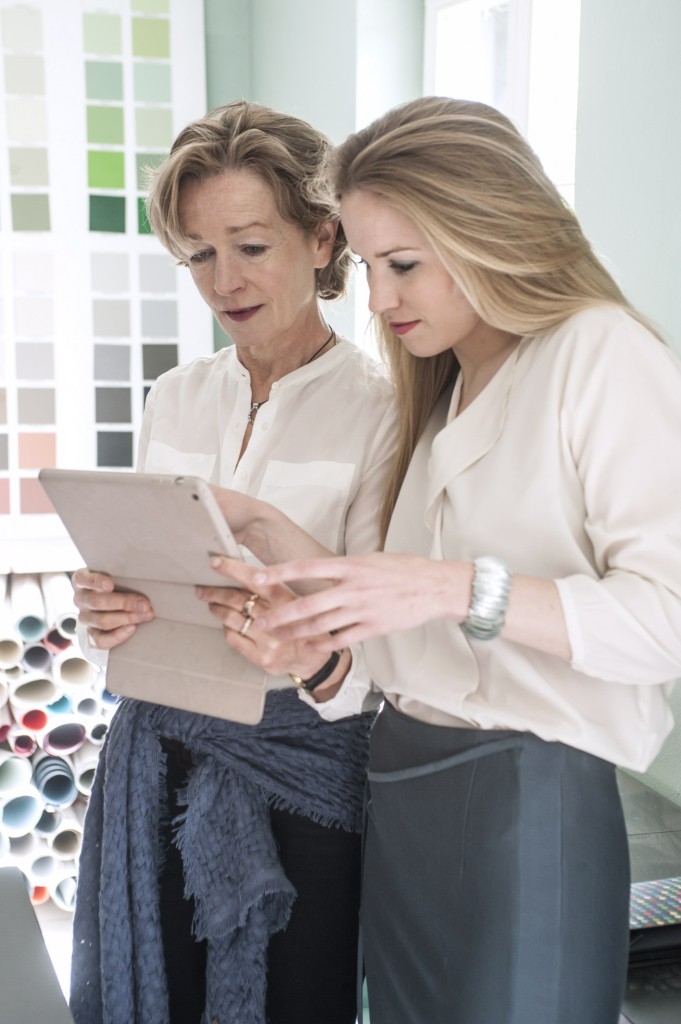 Anna and her mother Christina are a great team. Both passionate about the same things and complement each other in their talents

Time for inspirations is needed. Anna is searching for those in art, in the nature and on the road in the city. She likes color constellations of complementary colors like aqua and orange. “I love tensions, which are being made by contrast”, explains Anna. “I also like to design tone-in-tone.” She prefers it colorful, but not “screaming”. Today her palette includes 156 tones of colors based on color-emulsions, frequently named after people that are closed to her, memories and impressions that she gains whilst being on route. 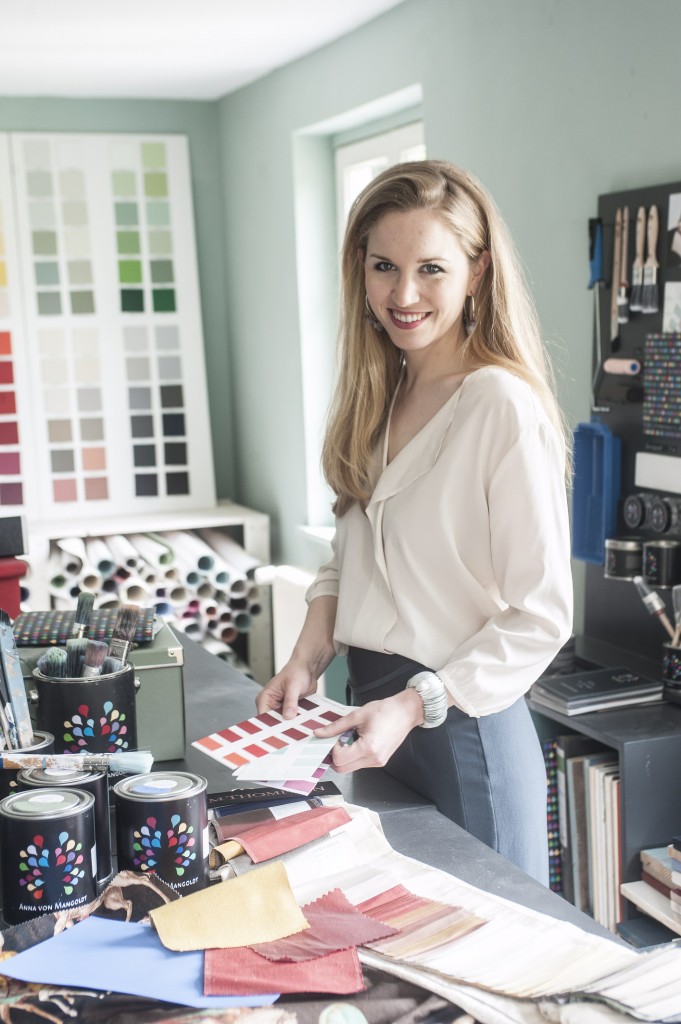 Anna’s colors consist of chalk, kaolin, pigments and an acrylic base. They are environmentally friendly, water soluble and virtually odorless. Due to the low water content, they dry very quickly.

For example “Ipanema” stands for the beach, the water and the sky of Rio de Janeiro, “Krabat”, a blue-black reminds her of the equally named roman by Otfried Preußler, which fascinated her when she was younger.
And Anna’s favourite color? “I’m a total blue-person”, she says whilst laughing. This is also the reason, which she created a very special blue that shines and glows – like her eyes: Anna’s Blue. BvH 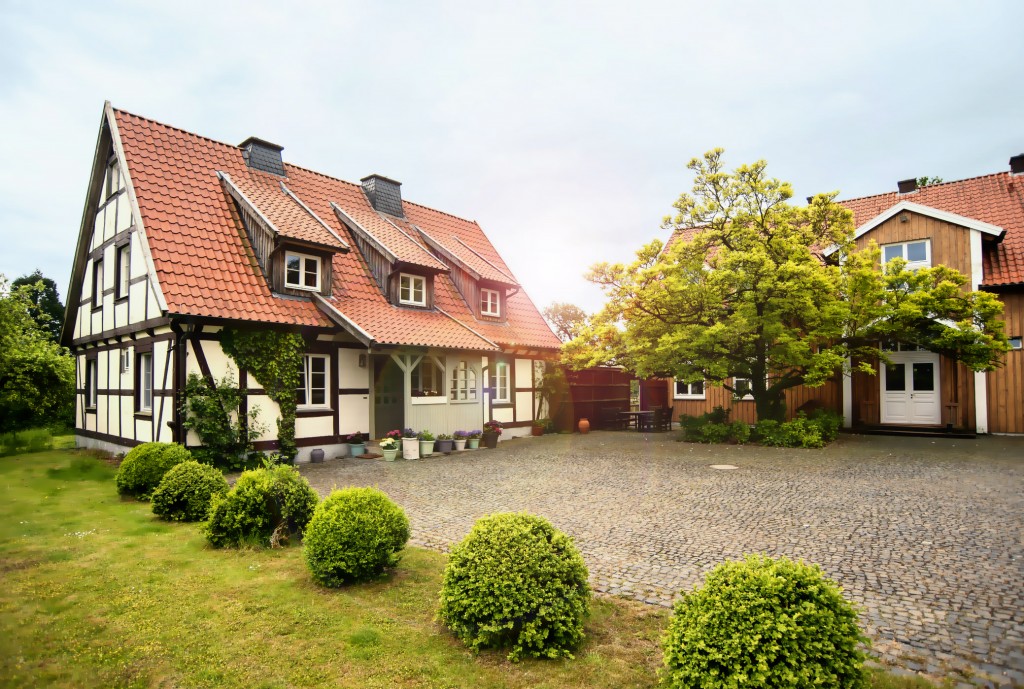 In the small half-timbered house Anna has her studio, where she offers also workshops for color schemes and decorative painting techniques 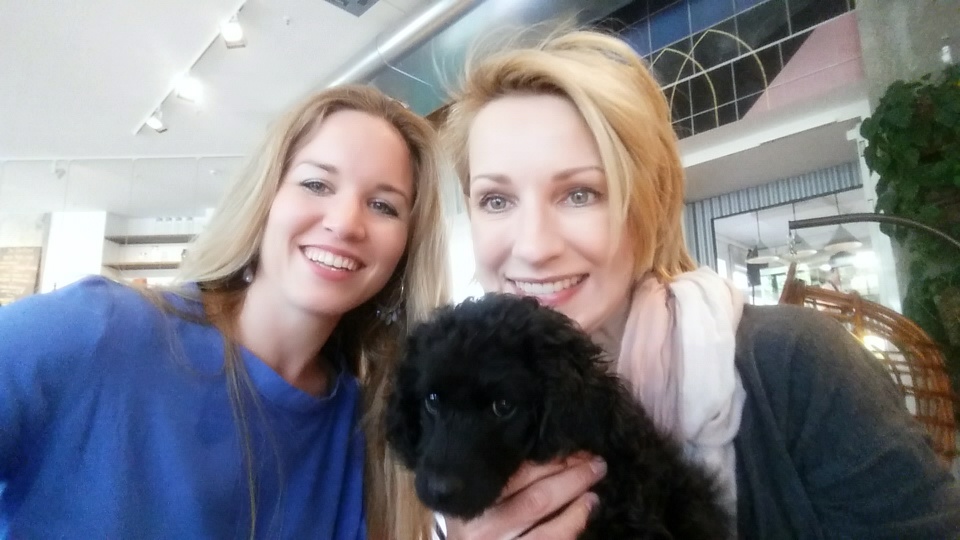 Selfie with doggy: Anna and I with her 16 weeks old poodle mix puppy Rosalie