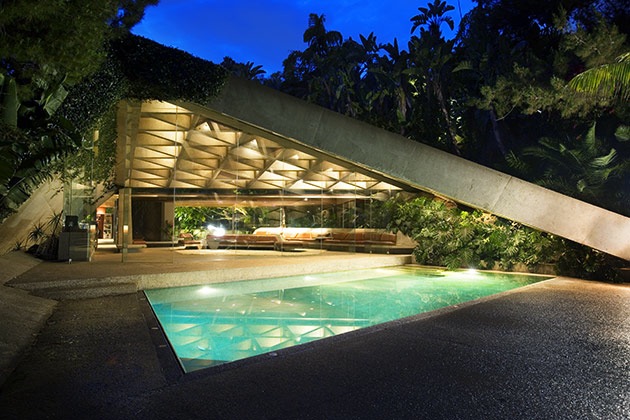 Since the 90s TV-Series “Beverly Hills, 90210”, one knows that this address is one of the most elegant ones in California. In this top quality location the Hollywood stars are next-door neighbors. Here lives the US-American real estate mogul James Goldstein, an eccentric fashion- and basketball enthusiast, who sits in the first row of every international fashion show and whose best friends are the top players of the NBA-League; a secret monger when it’s about his age or how he made his money. In the hills of Benedict Canyon, the cosmopolitan lives in a puristic villa with concrete triangles, steel beam and glass rhombus and overlooks Los Angeles from here, on good days even to the Pacific. 1963, on behalf of the couple Helen and Paul Sheat, the house was built by the architect John Lautner, until Goldstein acquired it in the 70s and, since then, continuously reconstructed. 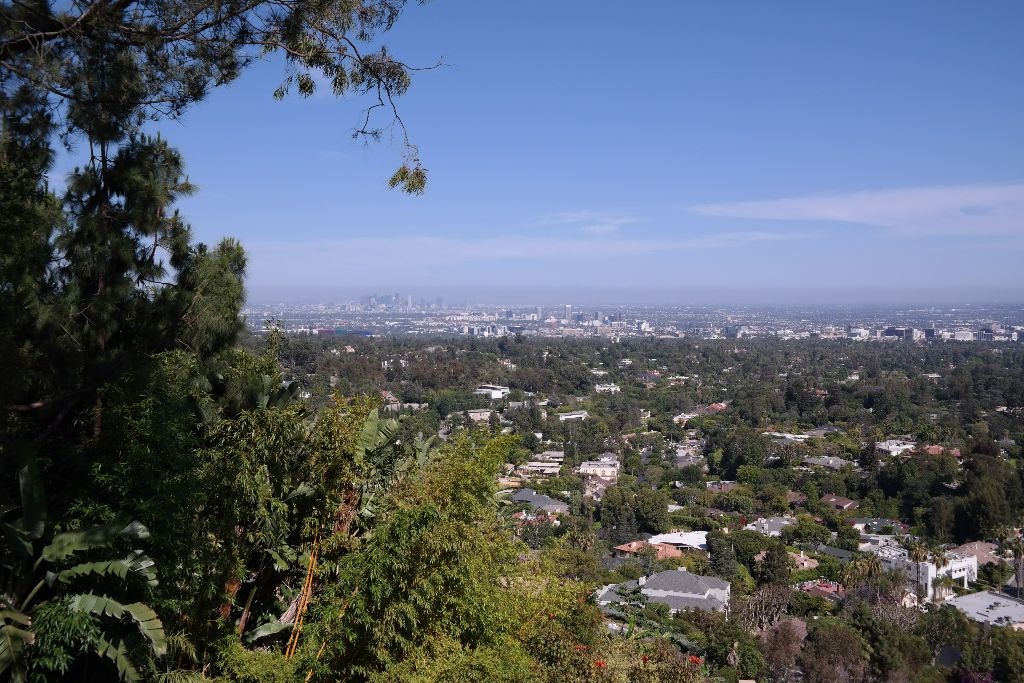 Stunning view from the pool terrace to Los Angeles, on the horizon, the skyscrapers of downtown 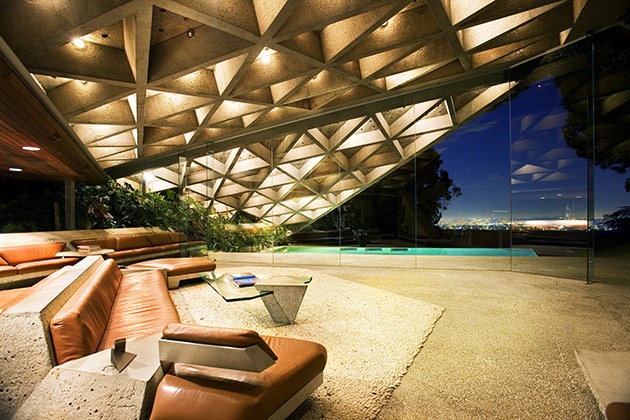 The living room with a breathtaking view of Los Angeles* 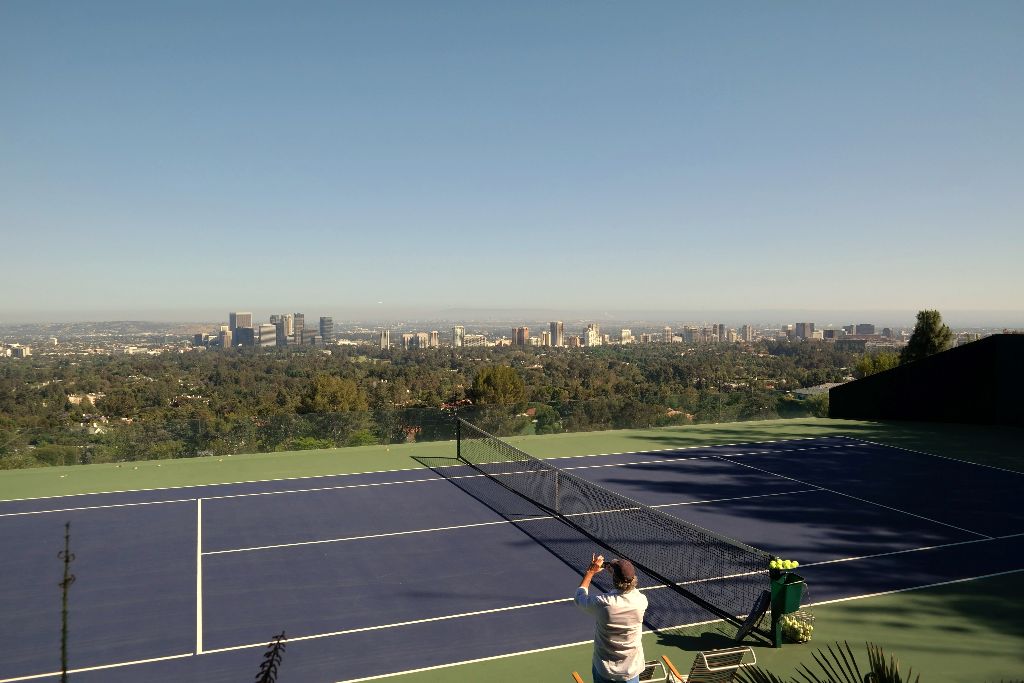 The most beautiful tennis court of Los Angeles: let’s take a pic! 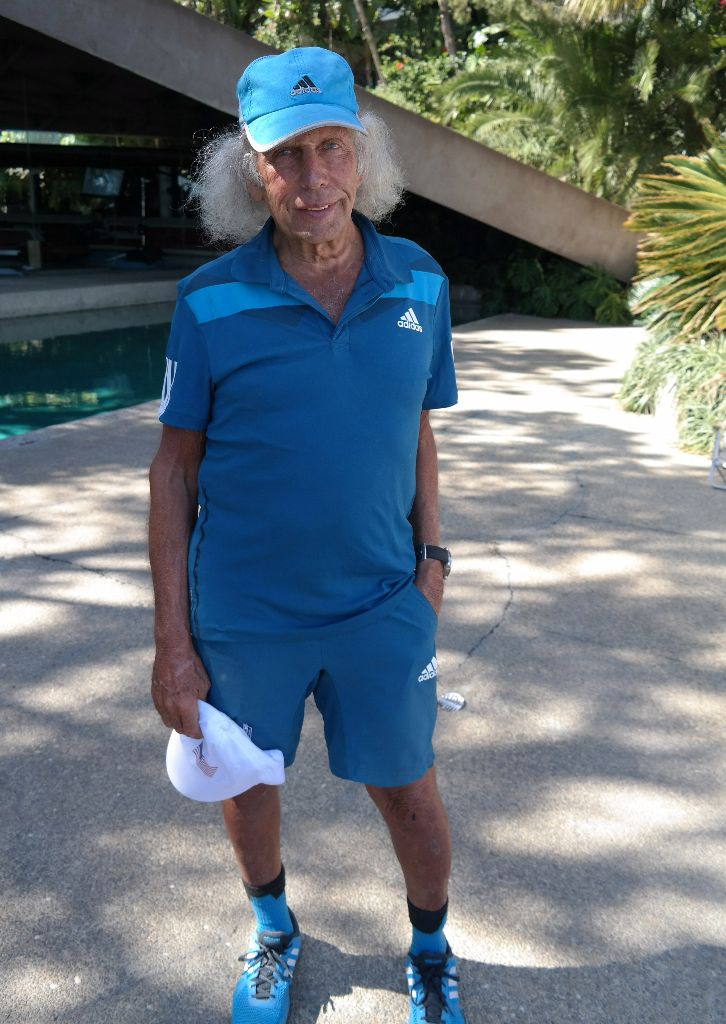 MyStylery: Jim, is your neighbor Rupert Murdoch actually still speaking to you? You buy off the whole region successively and expect the residents to put up with continual construction sites and the associated background noises.
James Goldstein (laughs): True! I’m not really making myself pleasant. The new project – Club James – is nearly done. Then it will be quite relaxed again. And also, after all these years I’ve never really seen Rupert Murdoch anyway.
MS: To build the new grounds, you took down the house which stood on there. Now there is a new construction with guest rooms and a nightclub, above all a tennis court. Why the private nightclub?
JG: There are no good clubs in LA, so I needed my own one. And the first parties where well received by my guests like Quentin Tarantino or Karolina Kurkova. 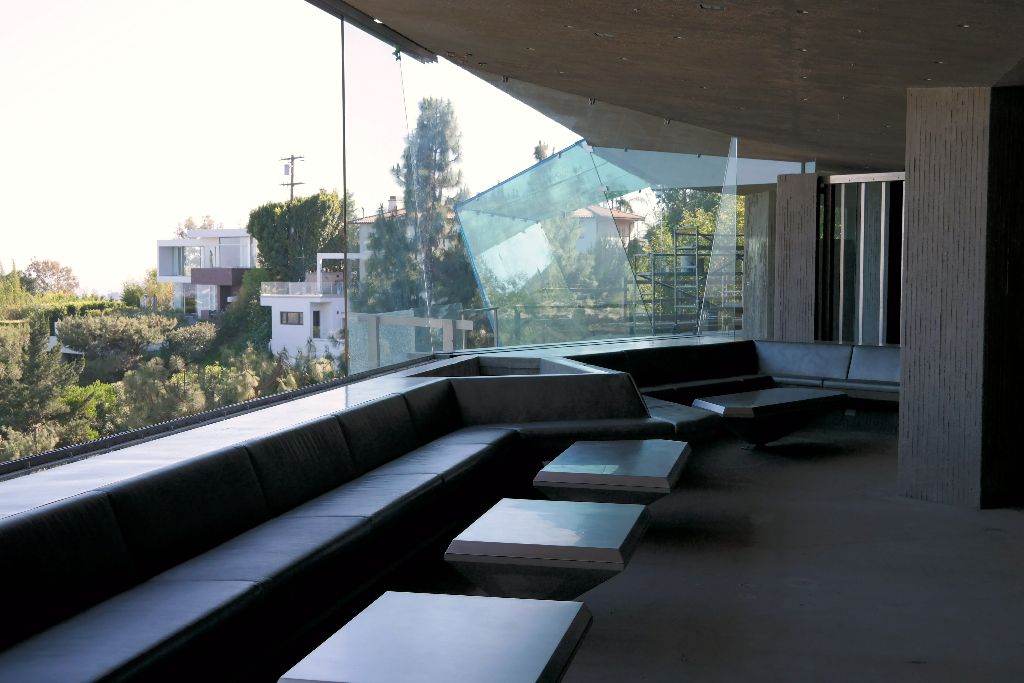 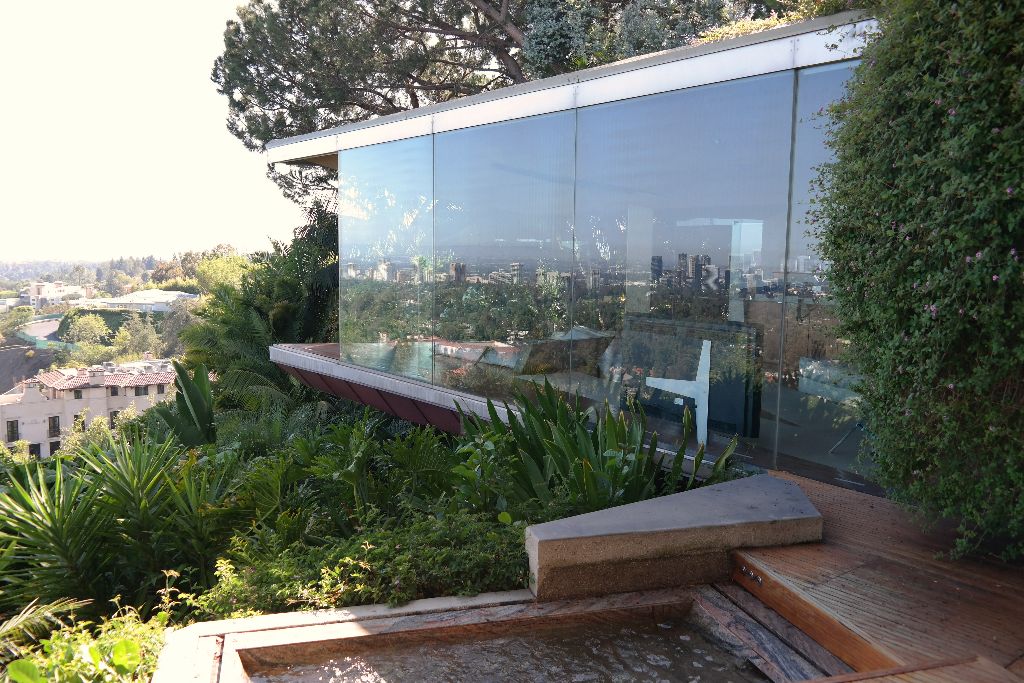 Infront of the glazed bedroom with it’s completly opened windows, there is an outside whirlpool

MS: Why would one buy a house which is constantly in renovation?
JG: I love changes. The actual reason for buying the house was my afghan dog Natasha, the love of my life. These dogs love to run. Therefore I needed more space. So I thought this house would be the ideal. Also I’ve always been a big fan of the architecture of Frank Lloyd Wrights, who is from Wisconsin just like me. Coincidentally I was able to buy this house in 1972 and showed it John Lautner, one of Wrights’ pupils. He was shocked about the conditions and what the former owner had changed. They nearly destroyed the house, as they painted the concrete roof green and yellow. This is how our 15-year collaboration started, in which we transferred inside and outside of the house into its original condition, until John died. Now I work together with Duncan Nicholson. 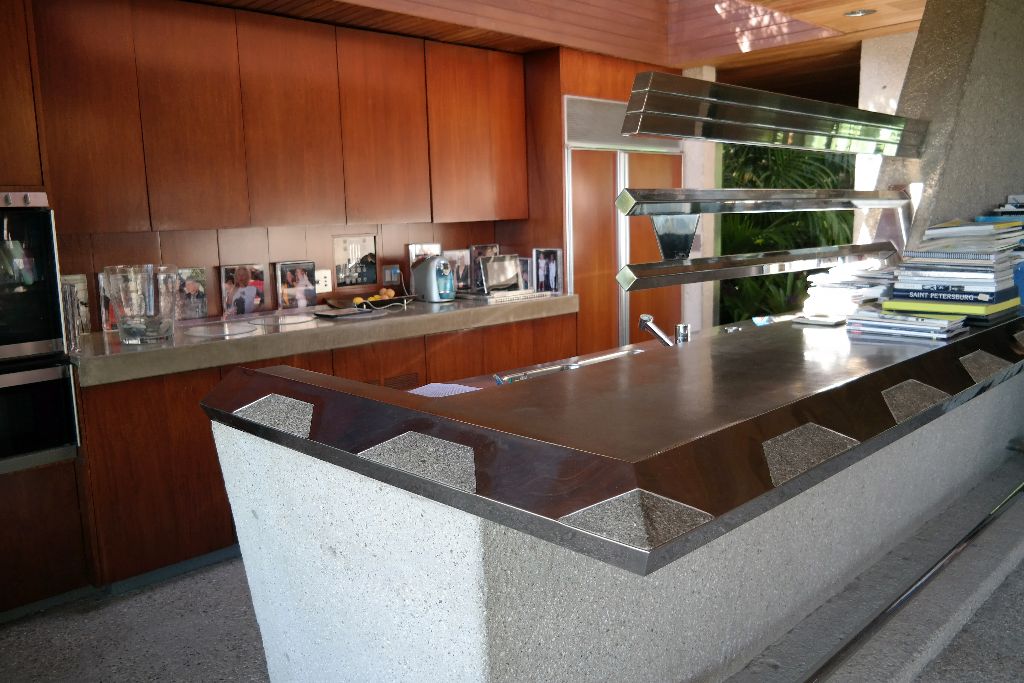 Kitchen and counter were also designed by designer-legend John Lautner

MS: In the kitchen, the dining room and bathrooms one can now retract the sealing electronically, in the entrance hall there is a koi pond including a water fountain, the windows of your bedroom can be retracted as well… All this sounds pretty elaborate and expensive.
JG: Still there had never been a budget. It should always be realized, what is best for the house. This also applies to the new nightclub.
MS: Three Angels for Charly and The Big Lebowski – your house already served many film productions as a setting…
JG: … and Snoop Dogg got his music video produced here. Yes, this gave me a kick. I don’t open the house due to monetary reasons. I just want to have fun.  BvH 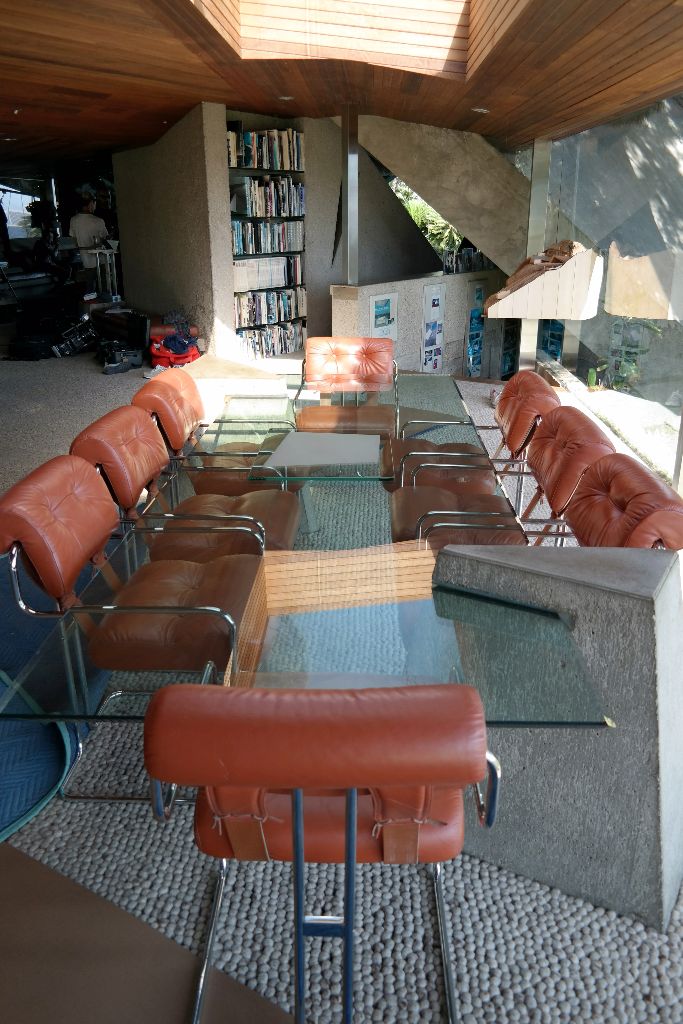 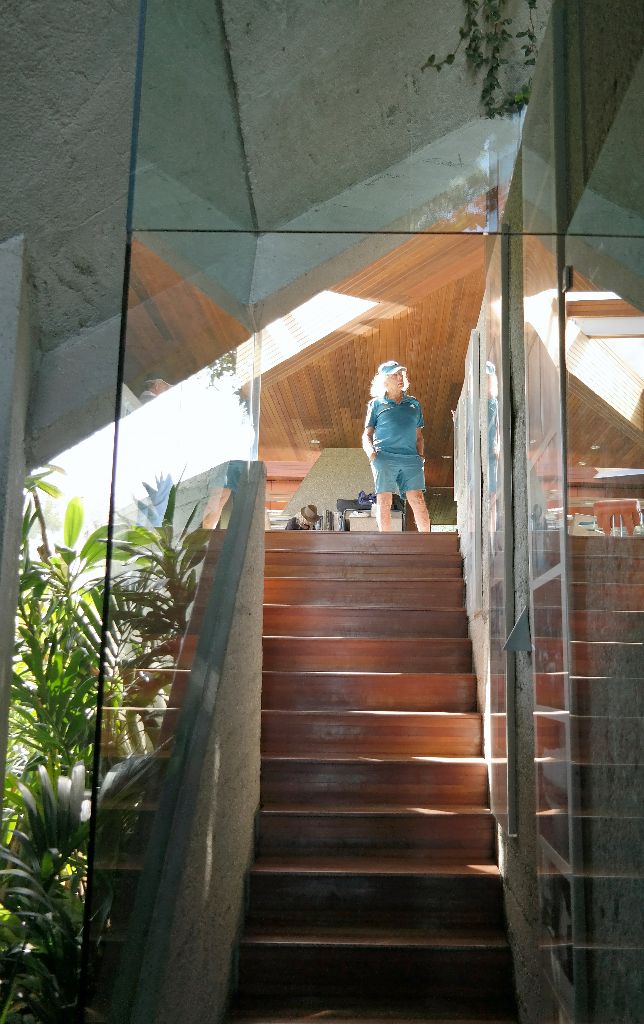 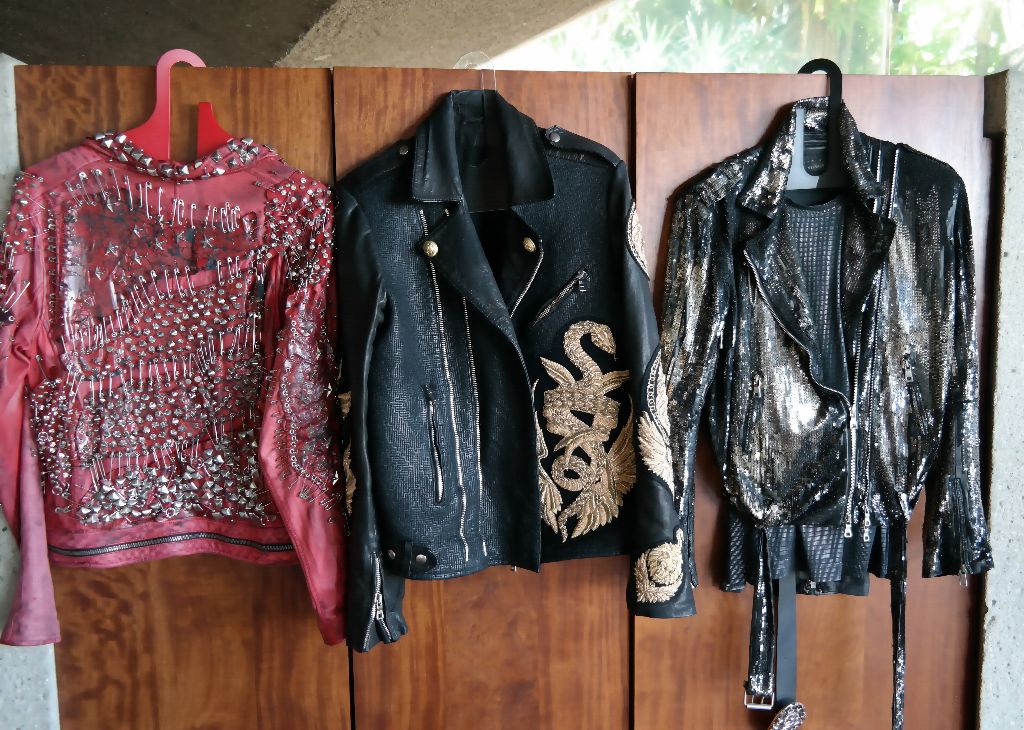 Designer fashion is part of the lifestyle of James Goldstein. He knows all the top designers in person 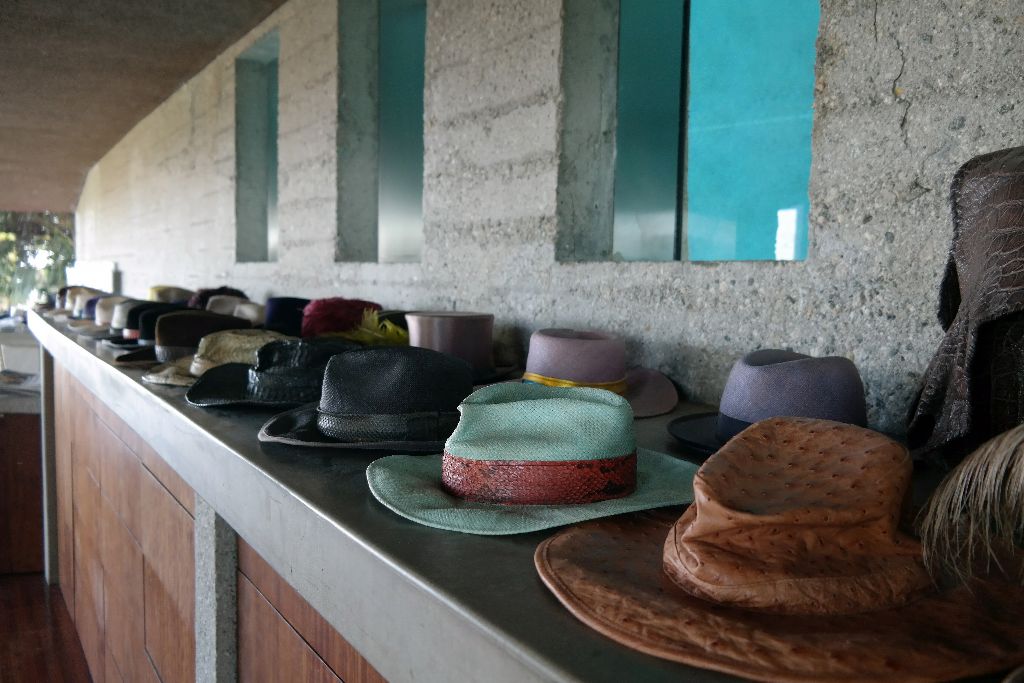 Never without headgear: Part of the hat collection of James Goldstein 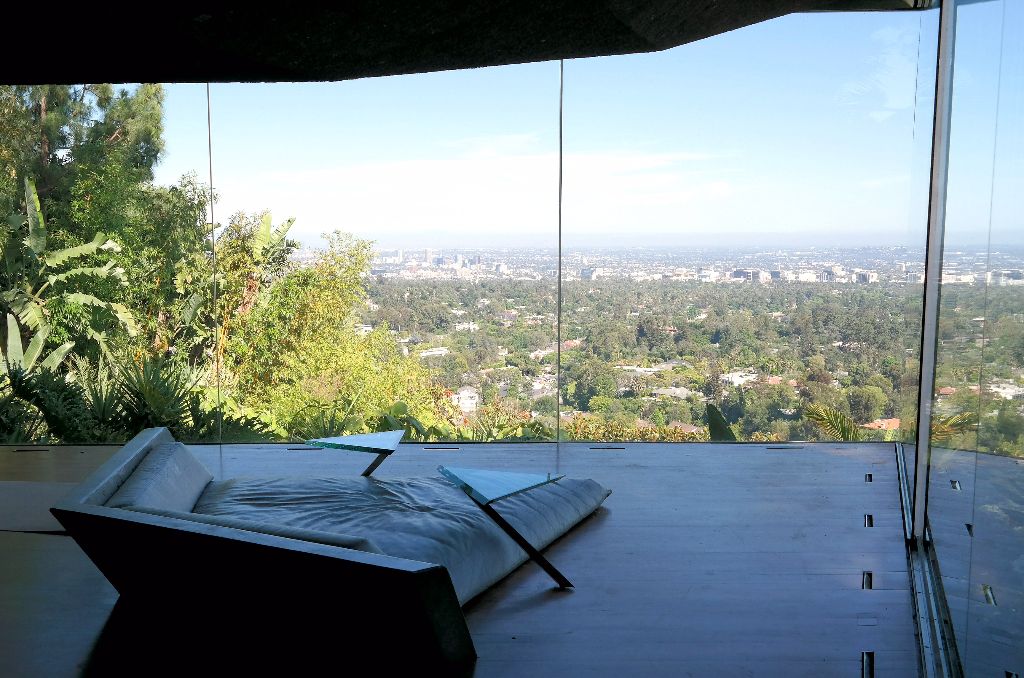 Room with a view: Watching L.A. downtown from the daybed 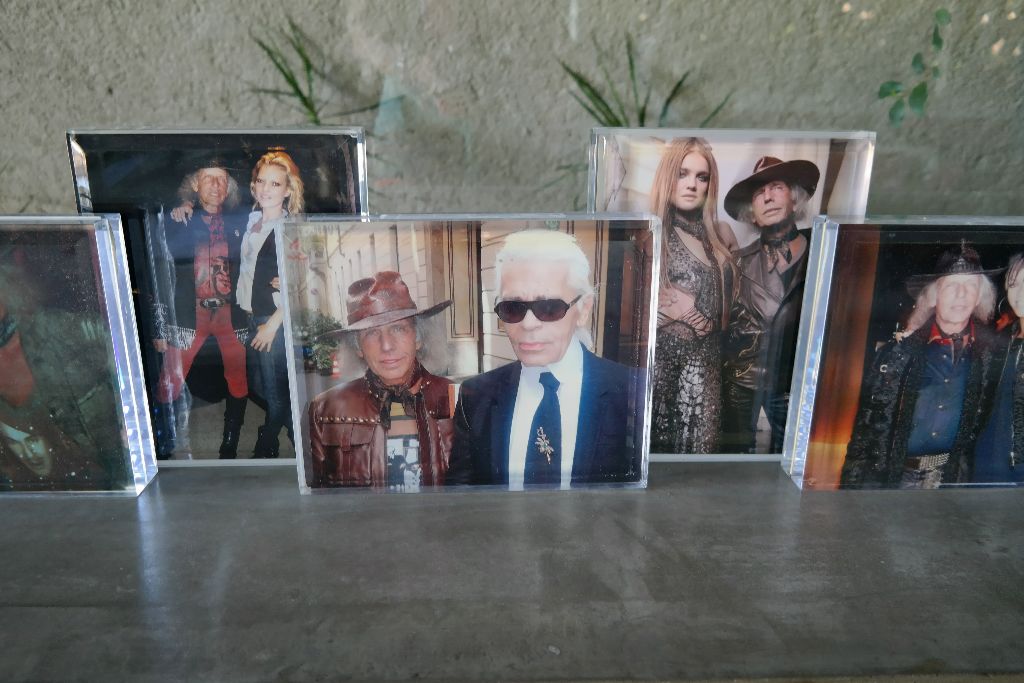 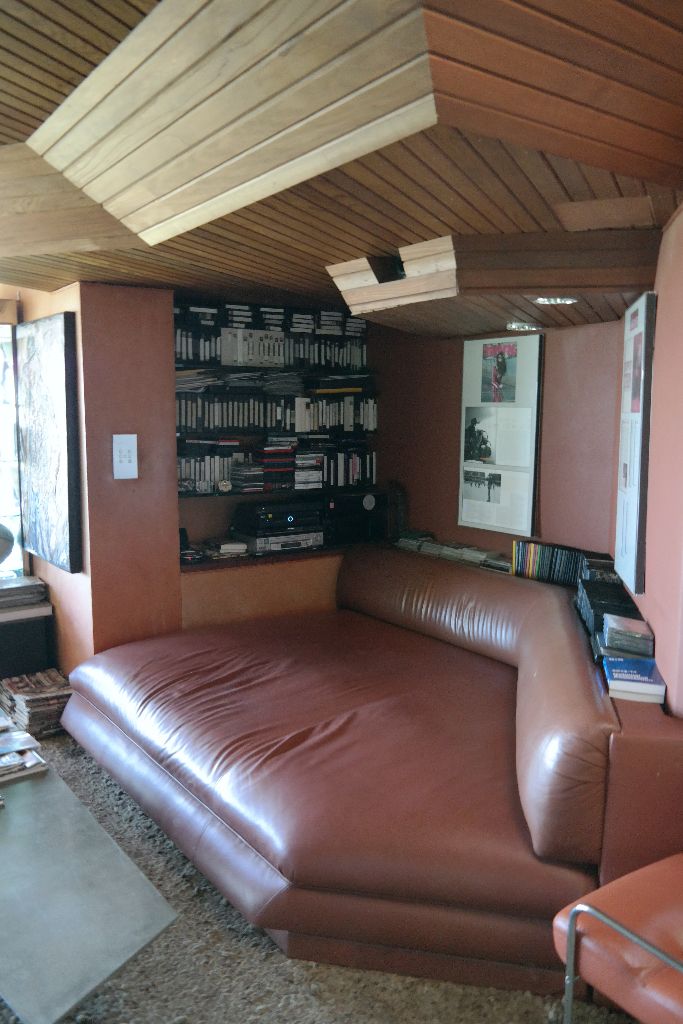 James’ retreat to relax and to chill 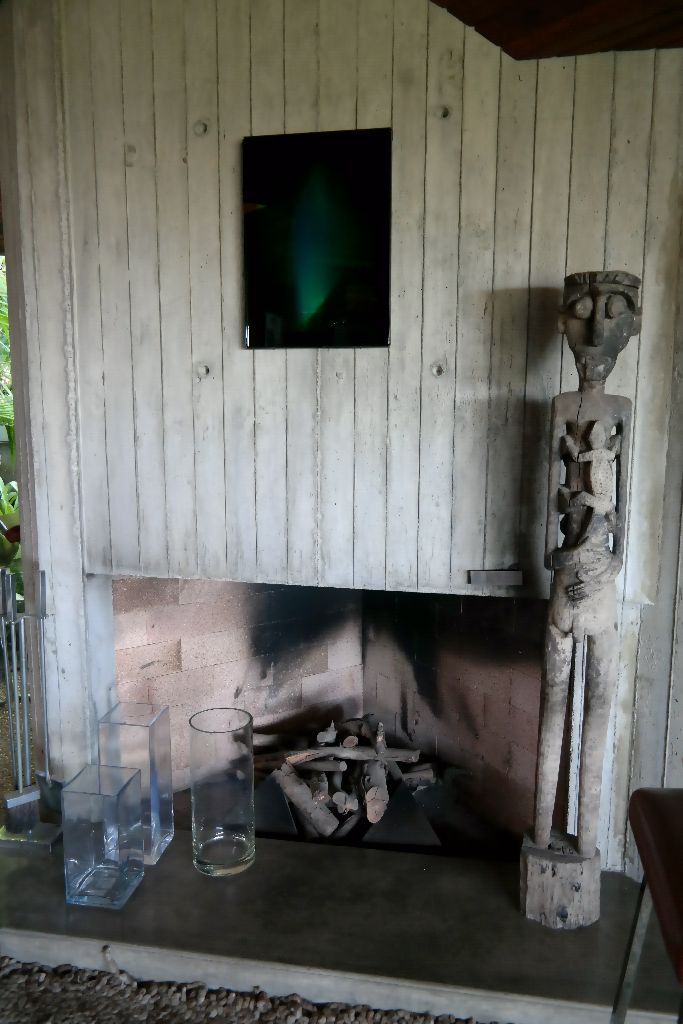 Also the fireplace is made of concrete, beside an African sculpture 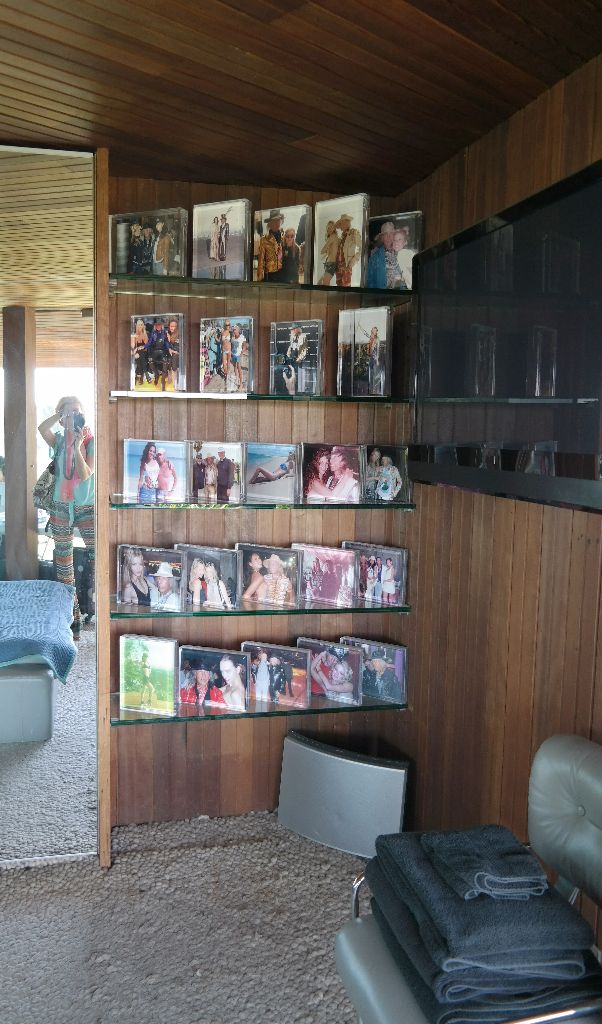 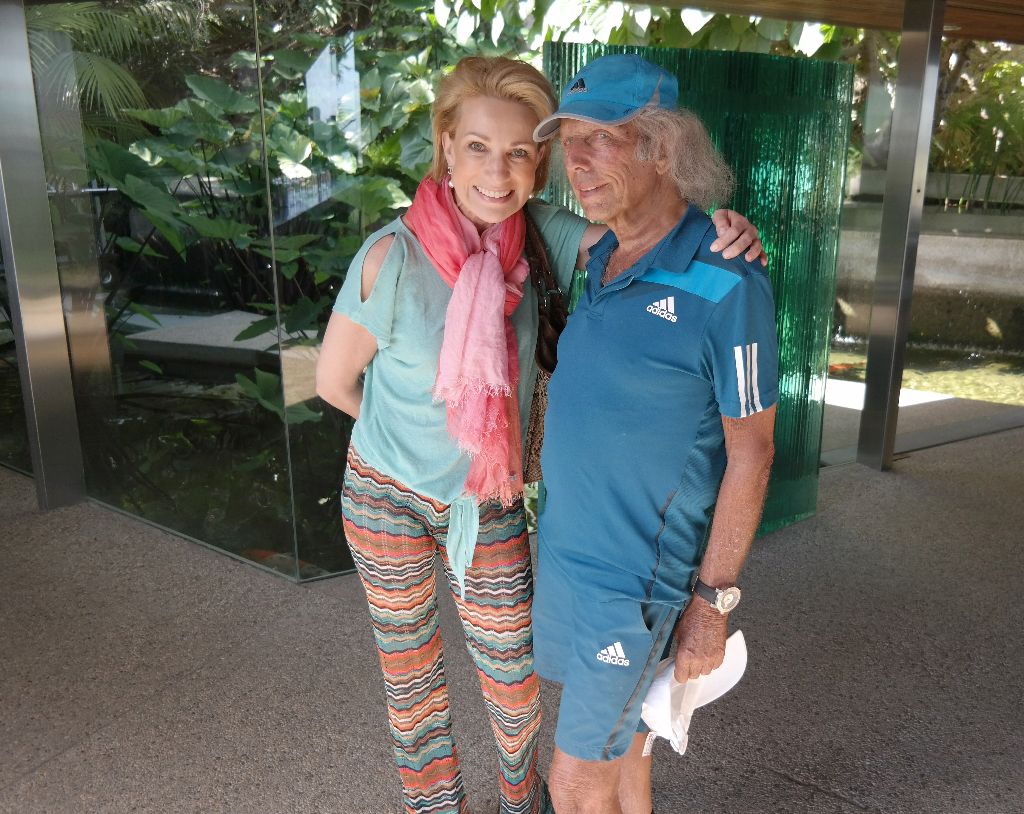 James Goldstein and me 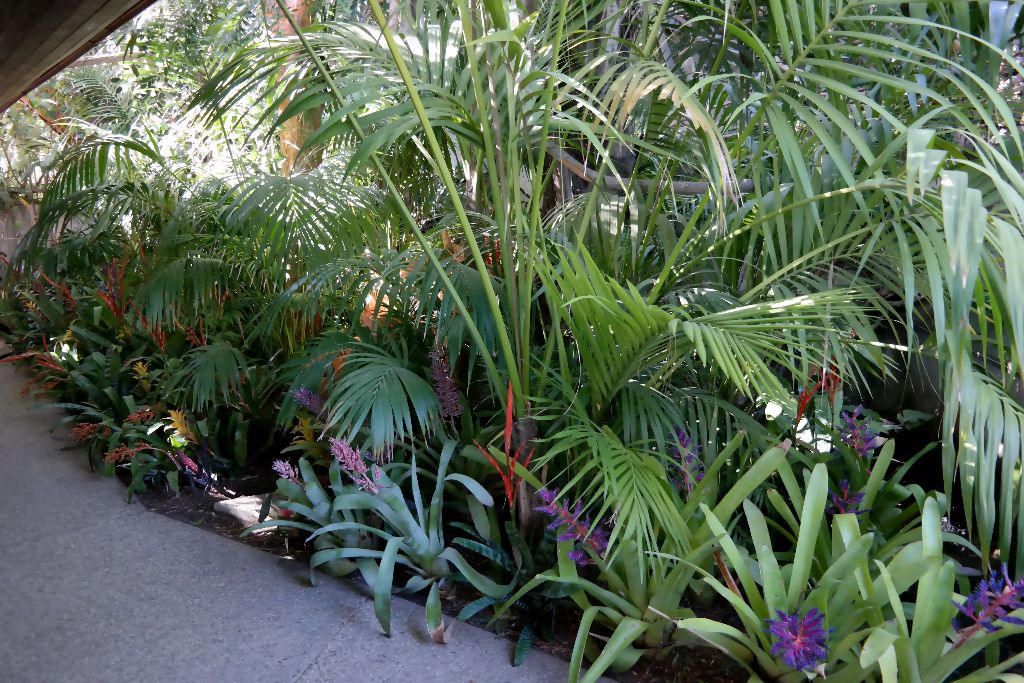 The property is surrounded by exotic plants 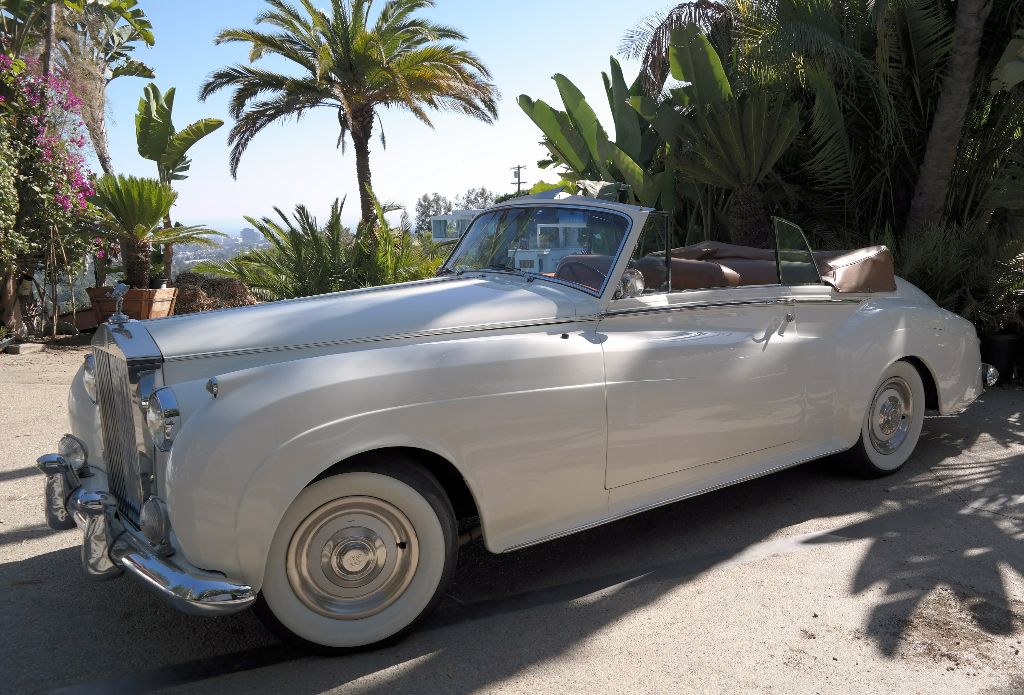 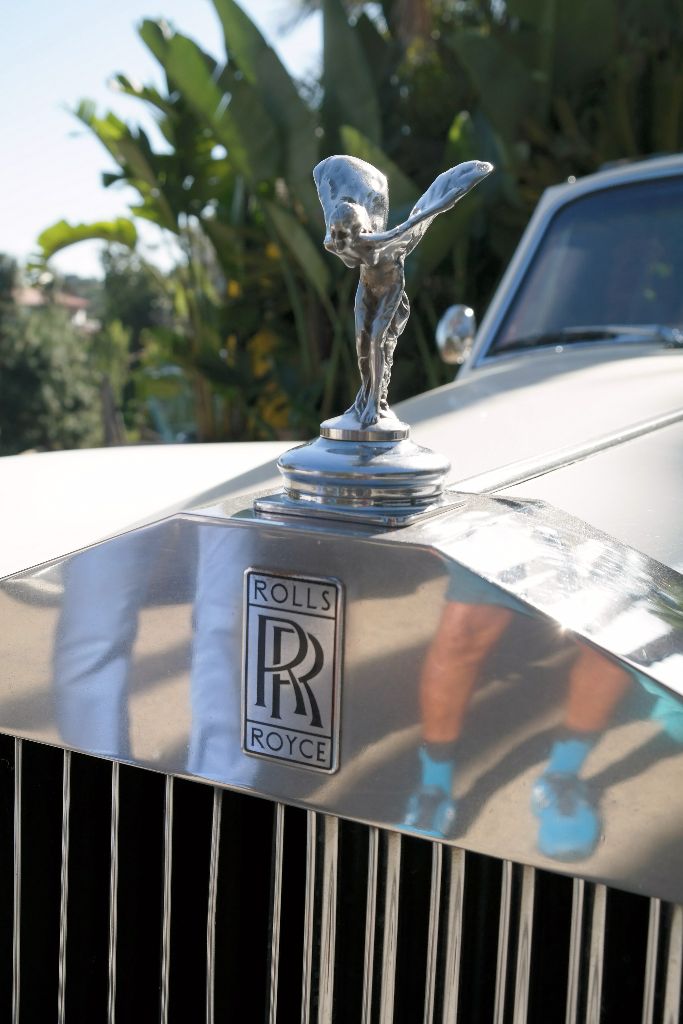 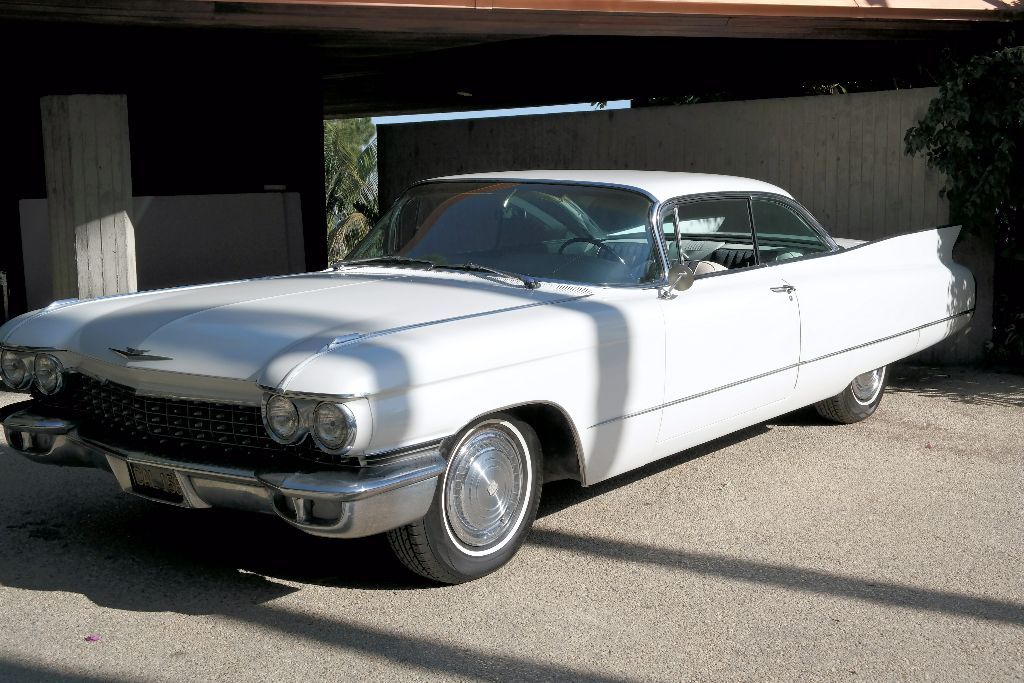 … and a Cadilliac from the 60s