Who: Else Edelstahl, Host & Initiator
Where: Berlin – Friedrichshain 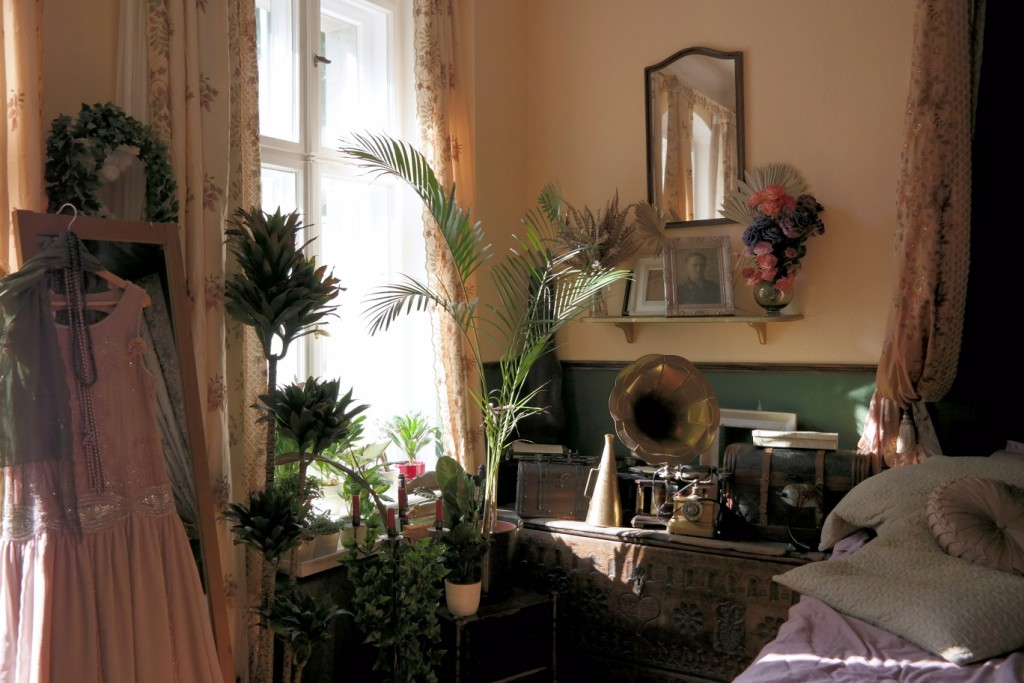 Visiting Else Edelstahl’s Berlin apartment is a trip to another era: “The things find me, I’m not looking for them.”

When you enter the old building of Else Edelstahl in Berlin-Friedrichshain one starts a journey through another time:
Antiquities next to flea market findings, draped fabrics at windows and walls, a canopy in the bedroom, chandeliers, gramophones, old telephones, pillows and chests. Else Edelstahl seems to love it museal. It’s an approach to life. Else brought the golden twenties back to Berlin with her “Gesellschaft für mondäne Unterhaltung” (society for classy entertainment) and when she invites to “Bohème Sauvage”, the legendary Berlin nightlife and the culture of the Bonvivants and Dandies starts to thrive again. Stylish, of course. Nowadays it’s already such a success that the Bohème Sauvage already takes place in Hamburg, Cologne, Vienna and Zurich. 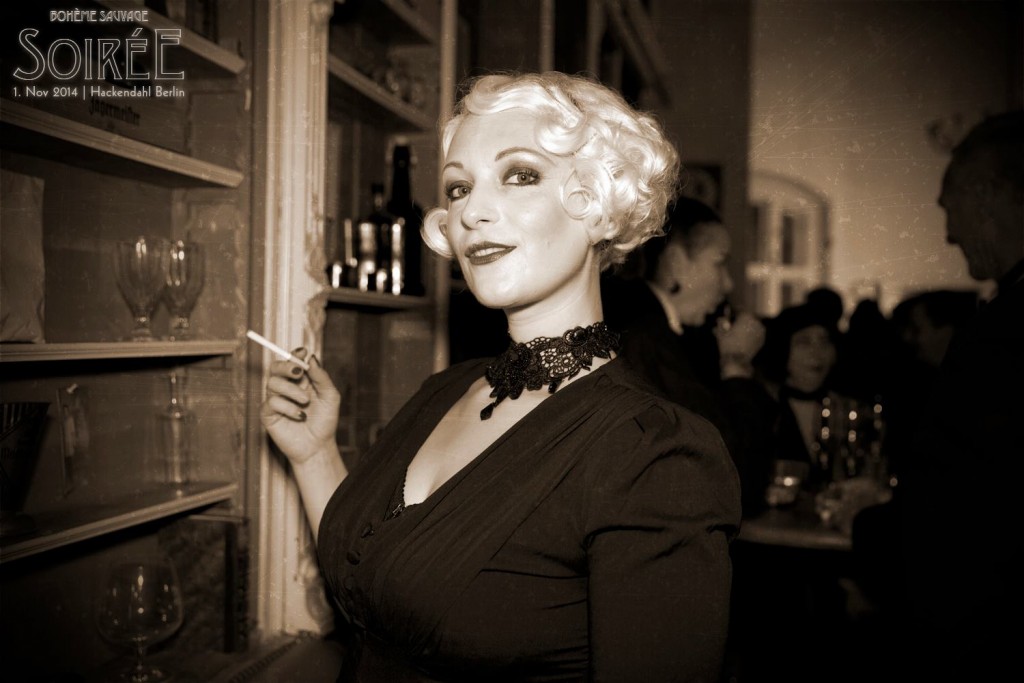 “I’m the Salonnière”, says Else Edelstahl, who also takes part in the organisation of the Berlin Burlesque Festival

MyStylery: Else, under your regime revived the twenties scene of Berlin. Since then the people cultivate the Golden Twenties and everything that has something to do with it. How did that happen?
Else Edelstahl: I always had a passion for costumes in a historical context. As teenager it has been the middle age and sward fights fascinated me. With 18 I was interested in clothes, etiquette and the historical dance of the Rococo. A book about the Paris salon-culture brought me to the idea of the “Bohème Sauvage”. This was ten years ago and there wasn’t a revival of the 20s scene in Berlin by then. 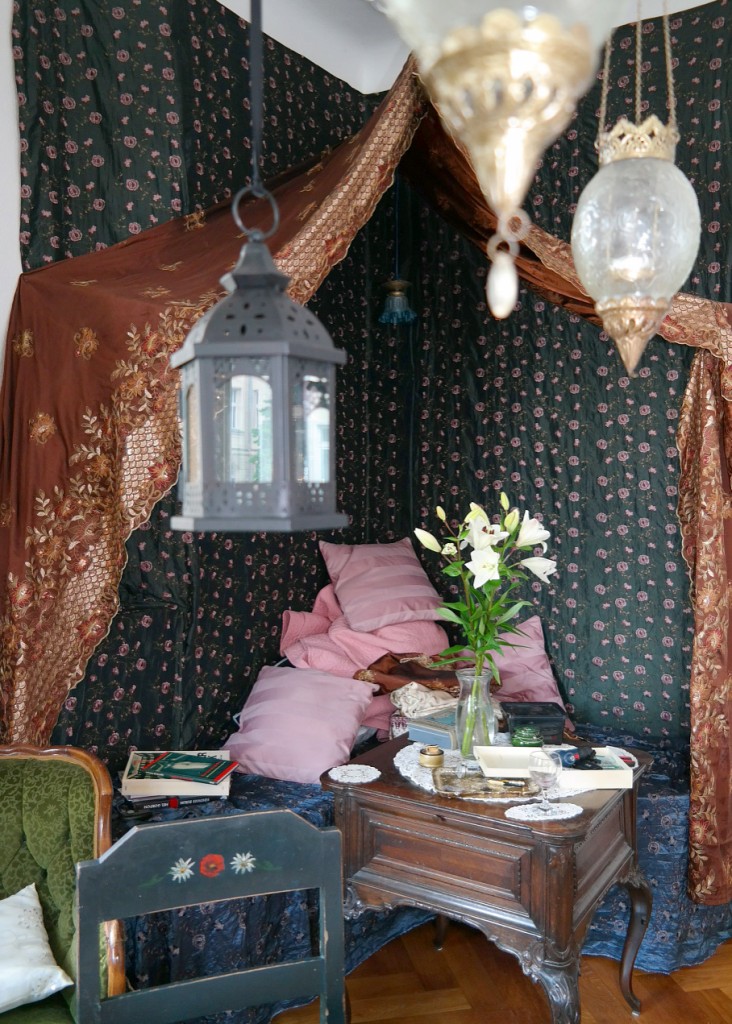 Else took over her stage name and a violin case from her grandmother. “The surname Edelstahl (stainless steel) was a crazy idea.”

MS: To your events that take place in Berlin in the Wintergarten or in the Konzerthaus (concert house) are coming hundreds of guests and in Cologne were already over 1000. Why turn people into tail and Charleston dress?
EE: Curiosity for the unknown and desire of the old times. And the fun of dressing up as well as the role reversal. To be once someone else: Prostitute or Diva, Mafiosi or Gigolo. Everything is possible at ours, from Gentleman to Revue-dancer. Guests can’t be overdressed enough. Get the stole out, the pearls and for the gentlemen gaiters and menjou-beard. Cheap carnival costumes aren’t welcome. We attach value for good, quality style. 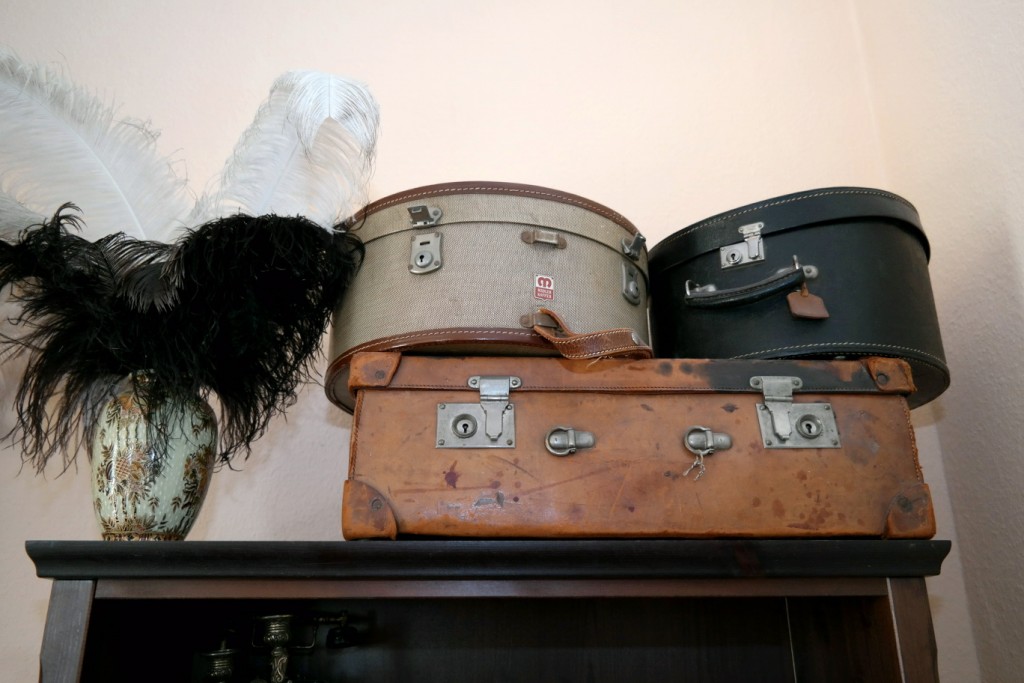 “The interior and all those things didn’t cost a lot for me.”

MS: And who doesn’t follow the dress code has to stay outside.
EE: That can happen. (laughs)
MS: You’re coming from Dusseldorf, spent your childhood in the Eifel, later studied German and Scandinavian. What brought you to Berlin?
EE: My spontaneity. Directly after finishing my Abitur with 18 years I visited a friend and stayed. Berlin is also a good place to organise parties. As a balance to my 20s-years-cosmos I like to go to 80s years and New Wave / Post Punk Parties or sometimes also to Berghain. 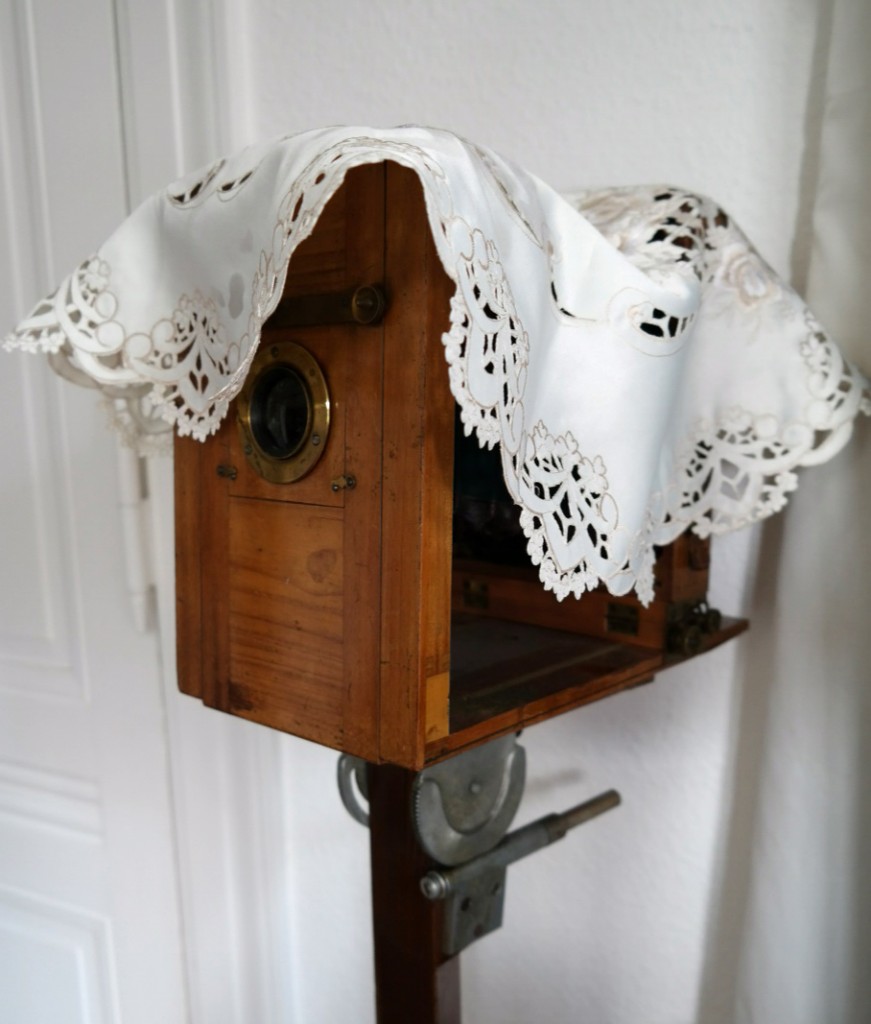 The camera with the stand and the lace doily is from 1908: “Of course I needed it.”

MS: In terms of interior you remained yourself absolutely faithful. Here’s only one computer – as concession for modern times?
EE: (laughs) This is pure necessity. I also never had a television. I love those old curiosities; you’ll always find a piece of history in it. I’m mostly attached to my inherited chest, a dowry chest from 1732. During those days you would have found fine linen in it, nowadays I put my letters and photo albums into it. My interior style wasn’t a profound decision. Such things will find themselves.  BvH 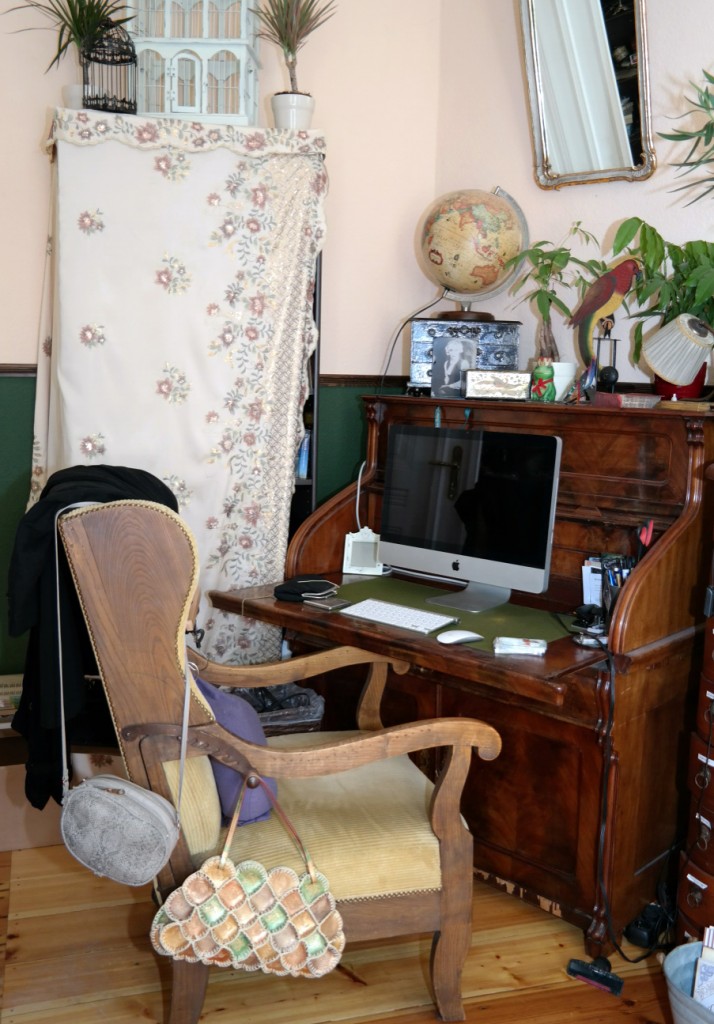 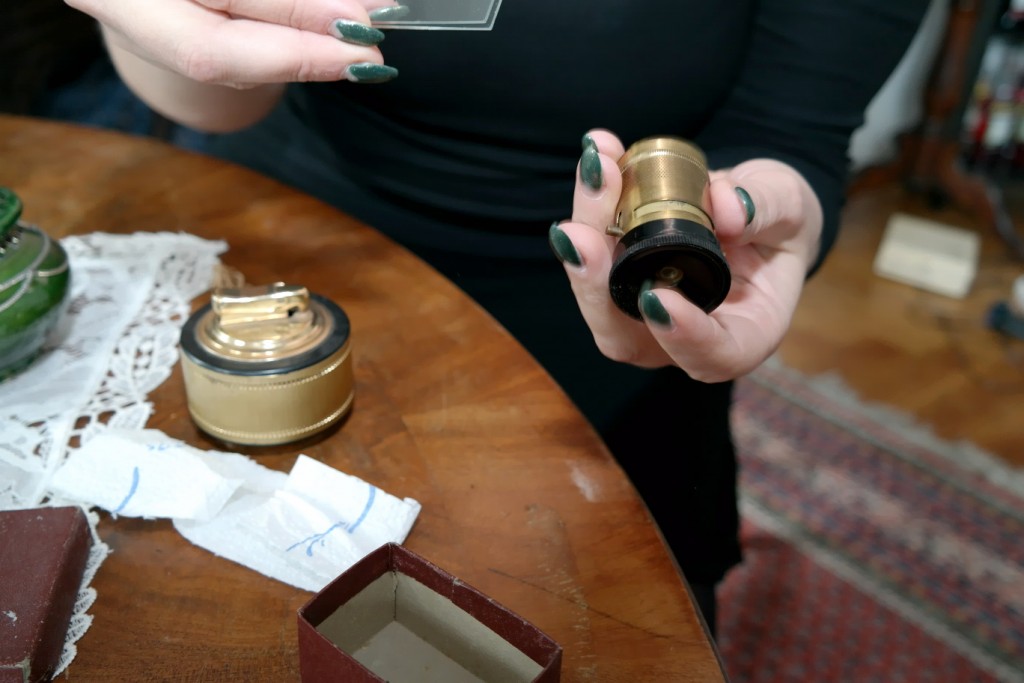 Else shows me how a mini microscope functions. It’s a heirloom of grandfather Josef. On the box it says: “Microscopes for every job”. 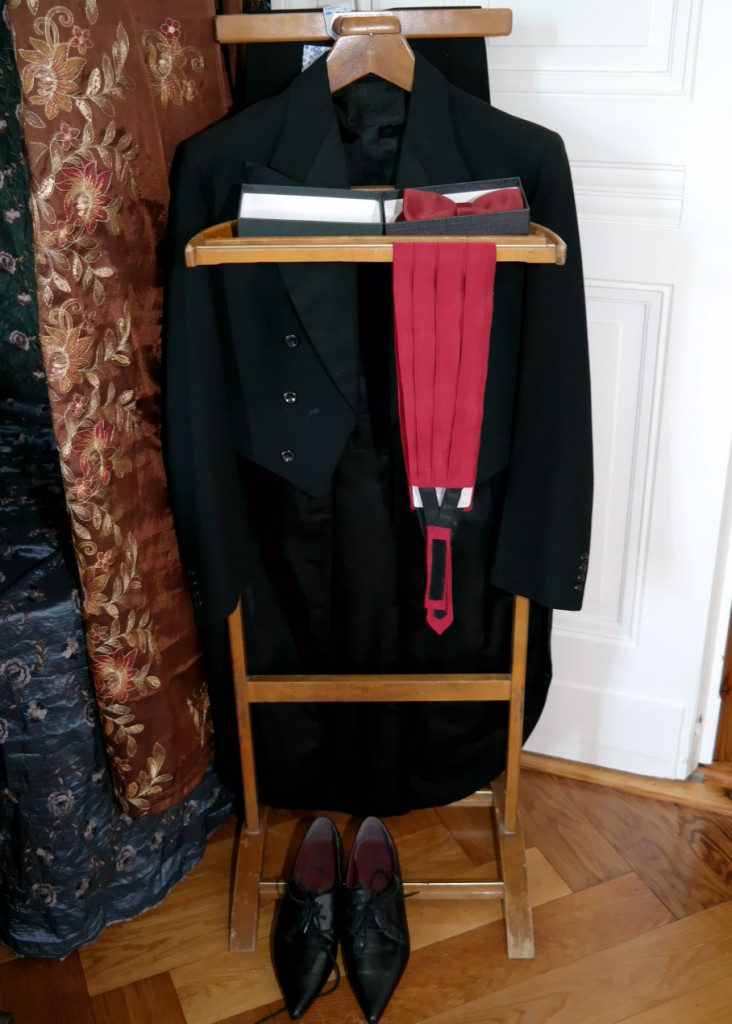 Else’s partner Coco wears the tail, as the men also come in style to the salon events 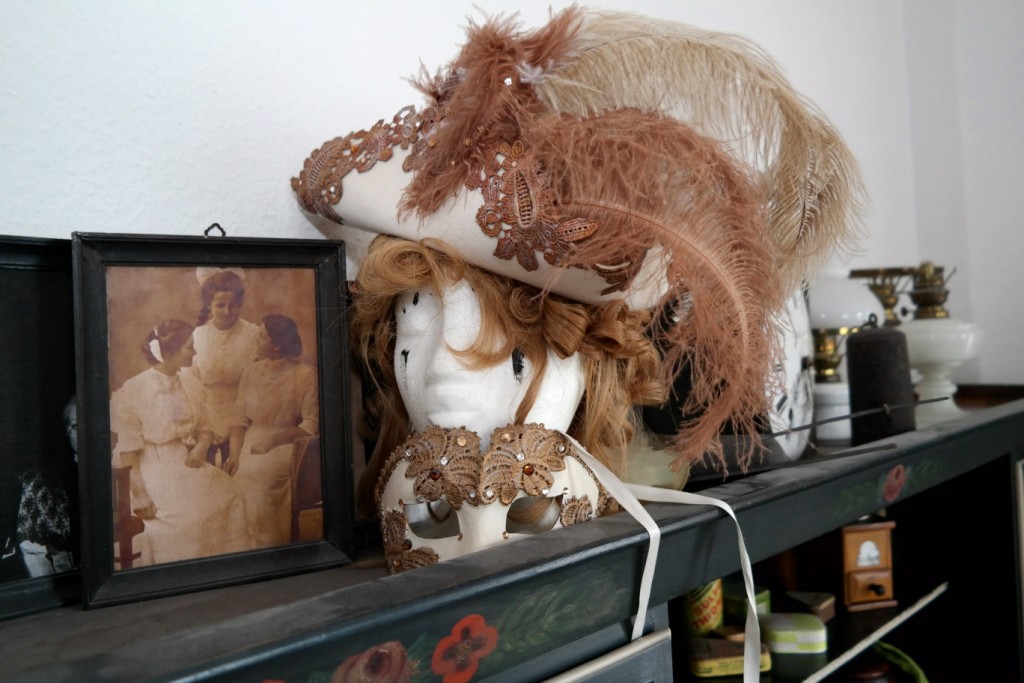 The apartment of Else Edelstahl is a wonderful Wunderkammer: everywhere there are new treasures … 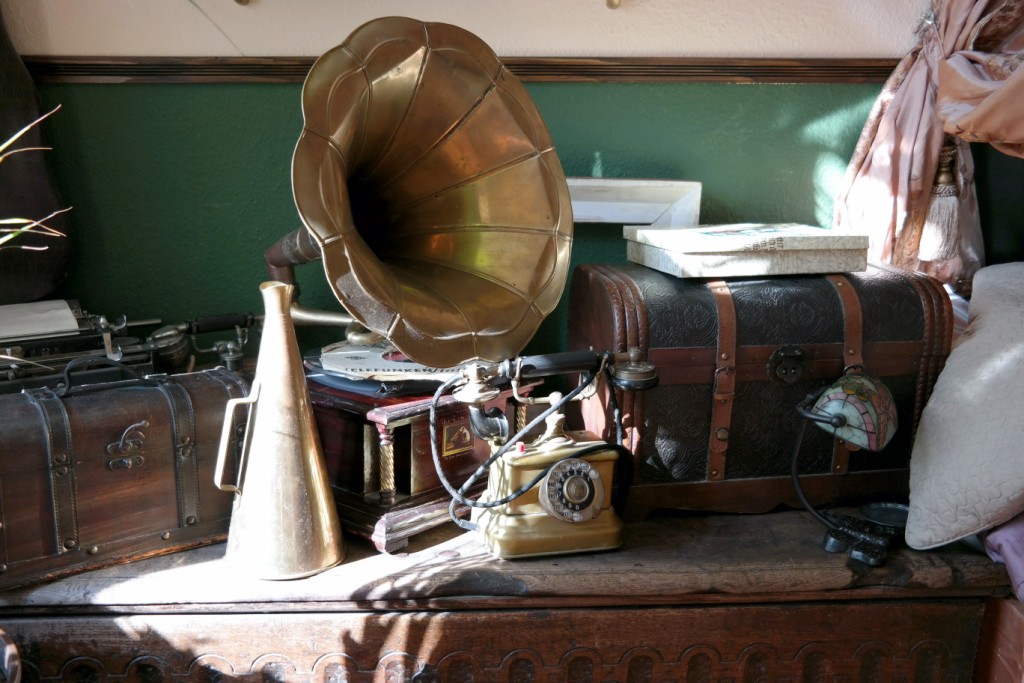 … such as the ancient gramophone or the telephone … 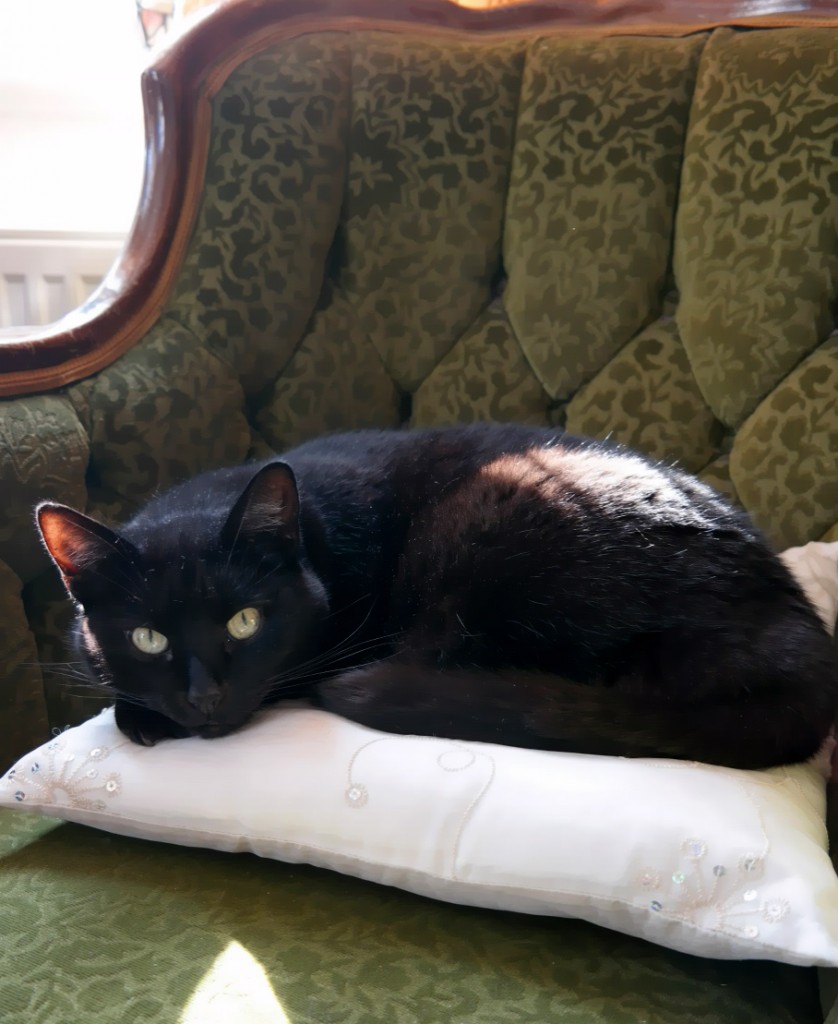 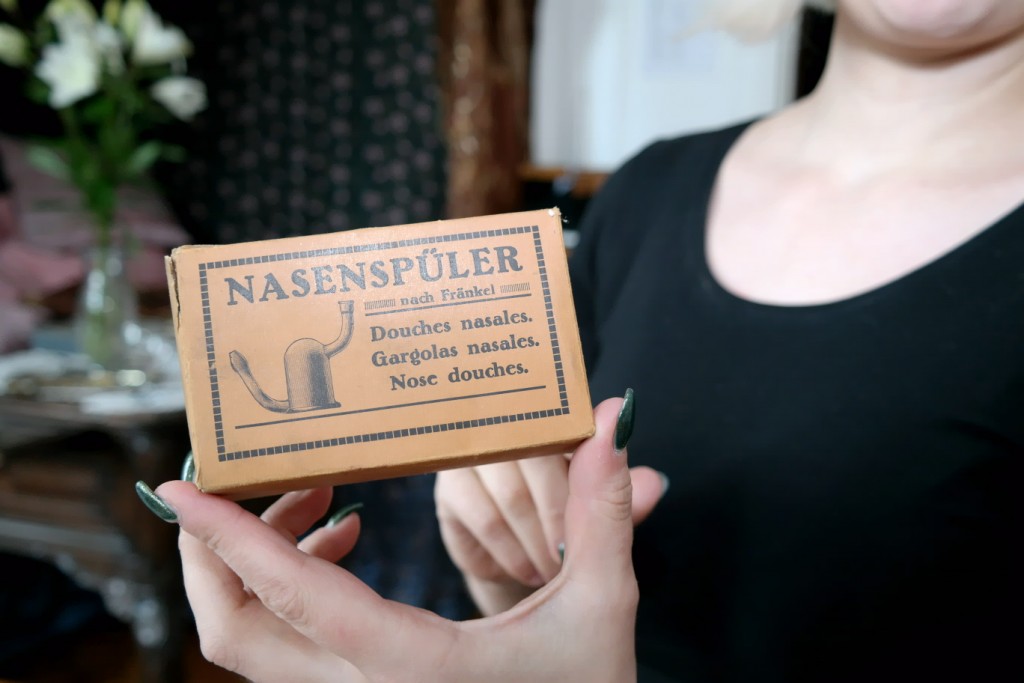 A small nasal douche complacent? Else knows how it’s done 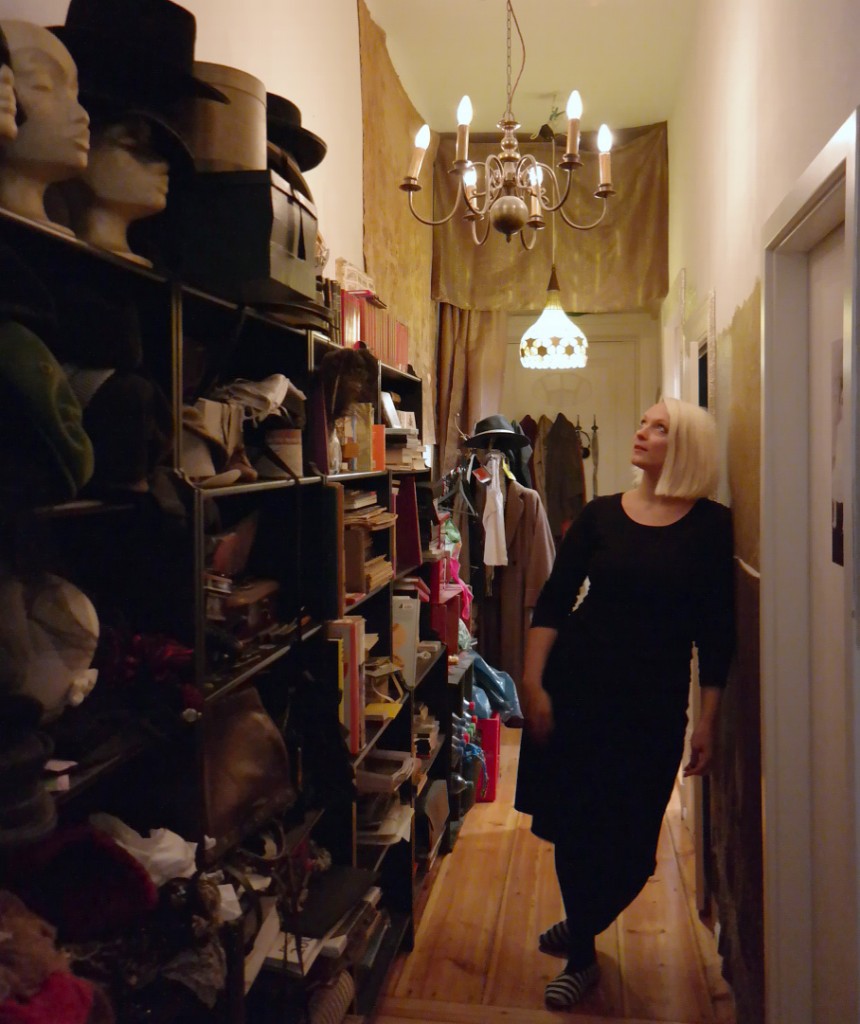 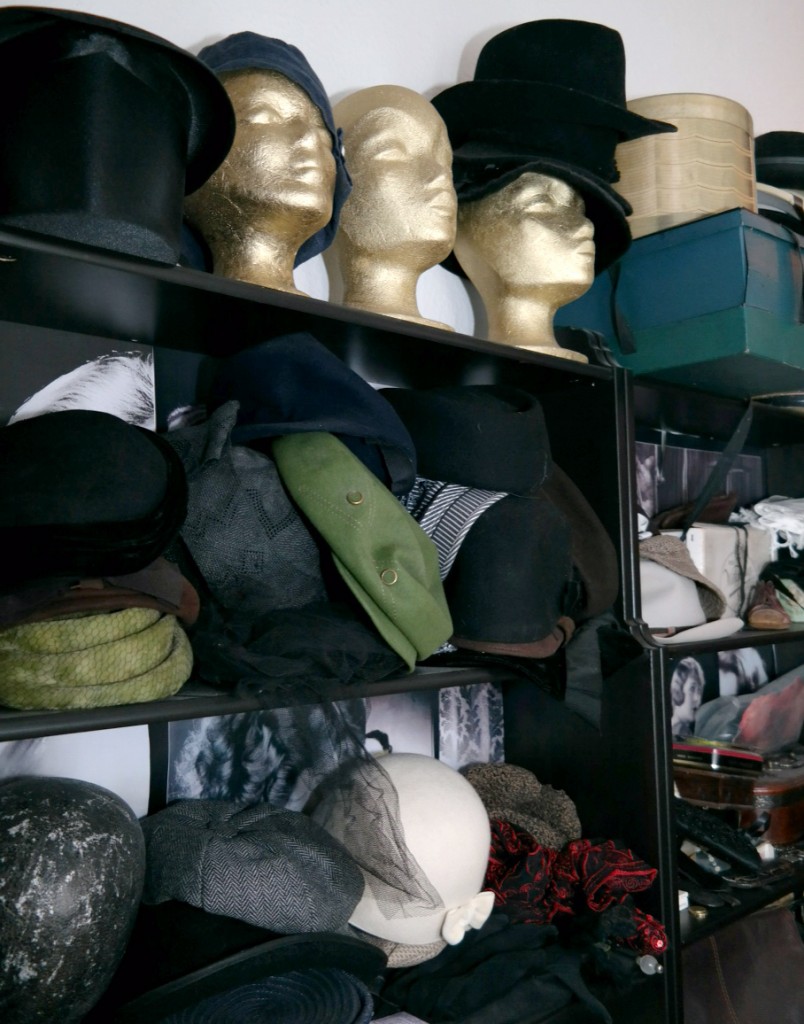 Hats and headgear for any occasion 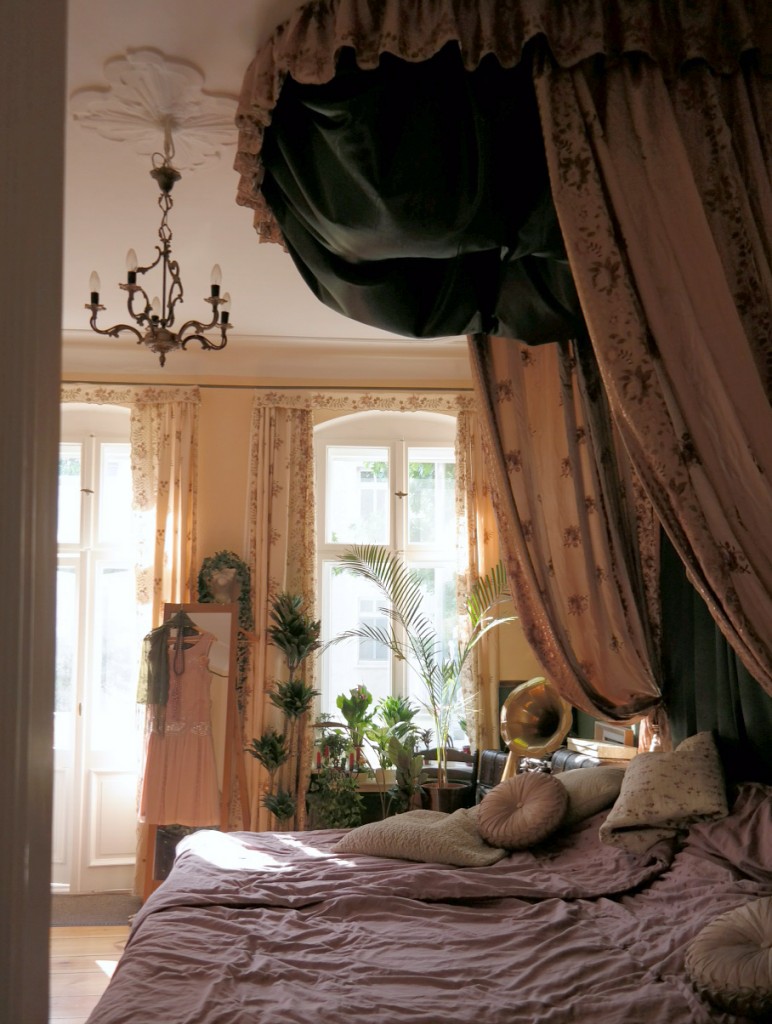 The apartment of Else Edelstahl acts as a perfect film set. And then this light: Thank you lovely sunshine, you made everything more enjoyable! 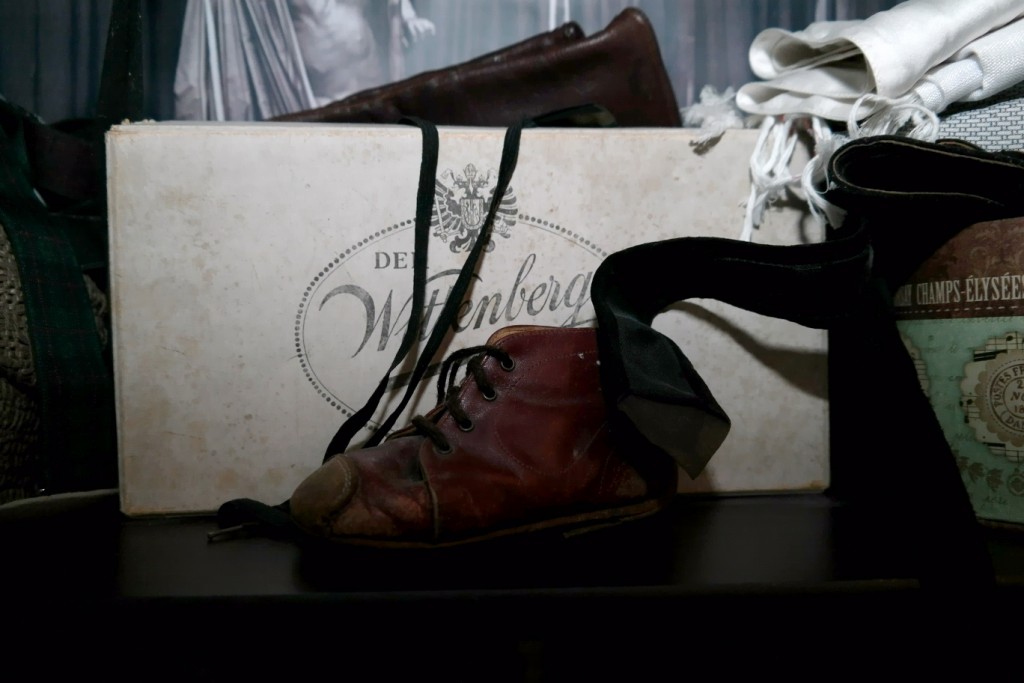 If one knows about Berlin’s nightlife, it’s her!
Four ultimate Berlin tips by Else Edelstahl exclusively on MyStylery: 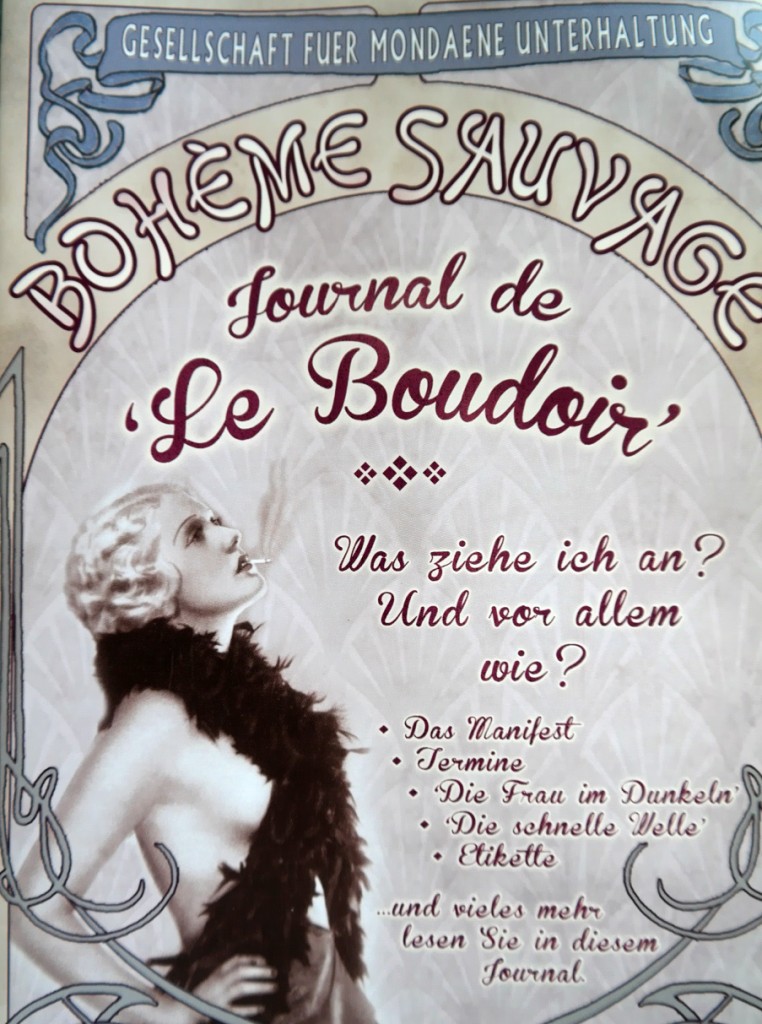 At Else’s parties dressing up is a must: no matter whether Bohemian, Cabaret, Dandy, Decadent, Diva, Crook, Gigolo or Vaudeville. Creativity is being asked

Tip:
Interested in disguise?
Else Edelstahl opened together with her colleague Tilda Knopf the costume rental Le Boudoir.
Here you’ll find everything you need: