What: Pan Am Lounge & Suite
Where: Berlin

Very chic: Pan Am Lounge employee Cecilie looks like she just appeared from a time journey in her Pan Am uniform

There’re lots of party hotspots in Berlin, but one of them is ranked very high in my personal ranking: the Pan Am Lounge in Berlin. No other location is so history-charged and simultaneously cool and hip like the lounge, which once pertained to the pilots and stewardesses of the American airline Pan Am as their Berlin home. 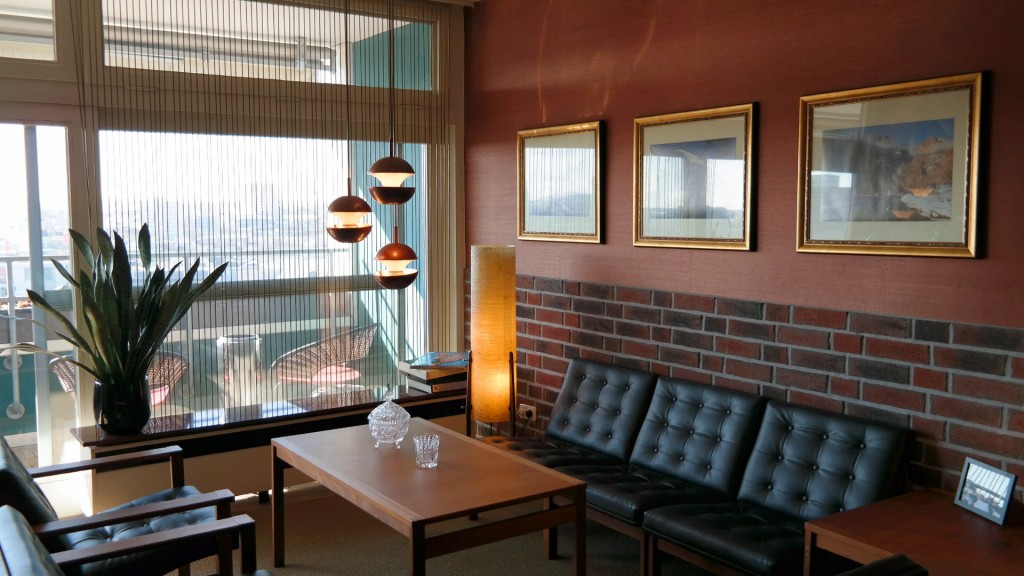 Indeed West Berlin could have only be approached by the airlines of the western alliance after the Second World War. Besides Pan Am, those were Airfrance and British Airways. In 1965 the former major of Berlin and later chancellor of Germany Willy Brandt inaugurated the Europa-Center. There the Pan Am ensconced itself and opened its headquarter in the pile between Ku’damm and Breitscheidtplatz. The airline concurrently solved the question where to leave the staff during their flight free days: cabins- and cockpit crews got accommodated in the adjacent apartment building ‘Eden-Haus’. It was the beginning of a legendary party era. 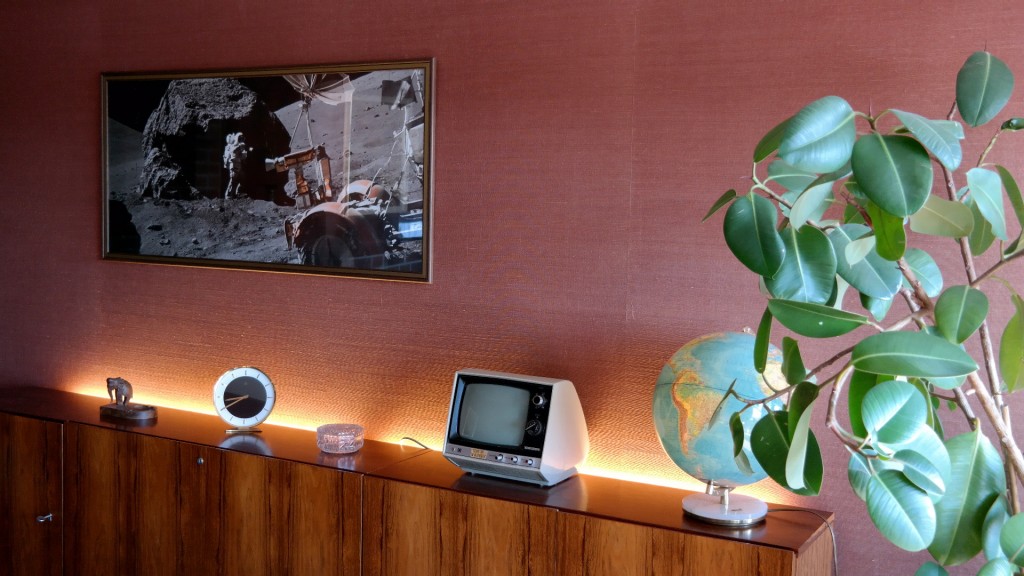 From portable tv and framed lunar landing motive to head-high cacti and illuminated globe: here’s everything in proper style in the sixties look 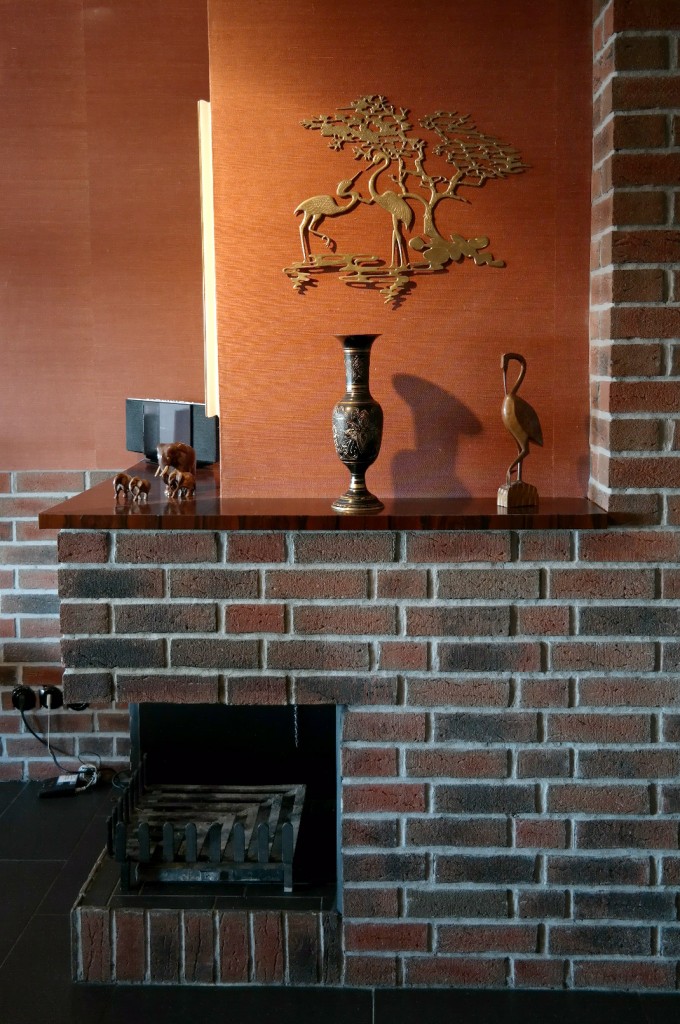 And on top of the socalled ‘Eden-Haus’ in the 12th floor a place for leisure has been designed for the crews, from which roof one has an unrestricted all-round view over Berlin. This dream location was officially reserved for the employees of Pan Am, whose wild parties had a reputation like a donnerhall. This raised desire and an exclusive circle got access to the Pan Am Lounge – with Willy Brandt as one of the prominent fans of the first hour. But in the course of the fall of the Berlin Wall in 1989 as well as the merger of the two parts of Berlin ended the party era. Pan Am went bankrupt. And the Lounge fell into a deep sleep.

A place for leisure for pilots and stewardesses 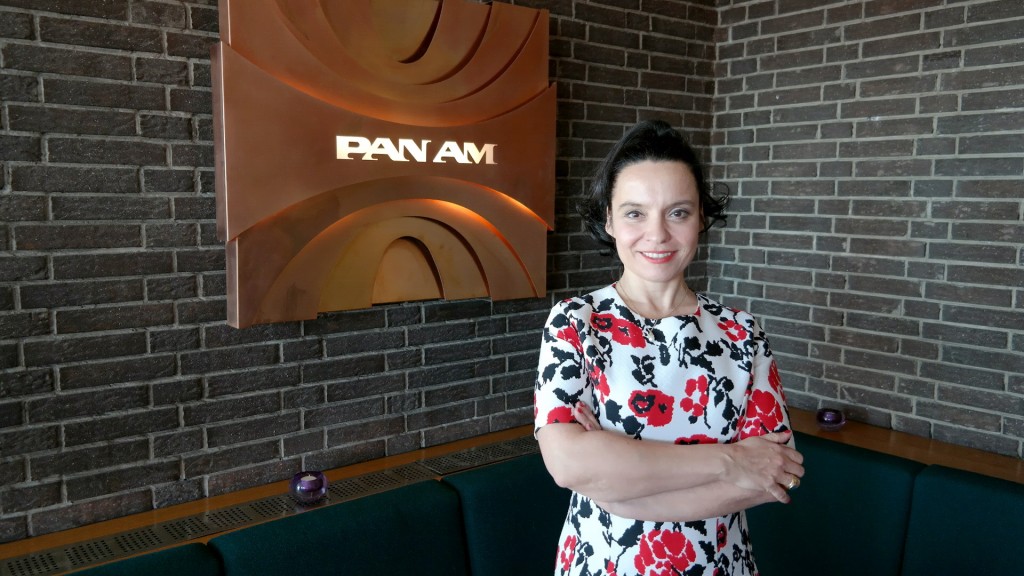 Manager Natascha Bonnermann in front of the logo of Pan Am Airlines, a stylised globe

Then Natascha Bonnermann appeared, a Rhenish cheerful person with Austrian experiences in the gastronomy, who looks like she has just arisen out of the Sixties. When the former actress turned the keys of the lounge ten years ago, she was astonished: in front of her lay a sixties-paradise, a jewel box, that would have withstand every movie set. The present manager of the Pan Am Lounge blew the dust from the teak furniture and bar chairs and immersed new life into the lounge. The revival of the legendary party-location! 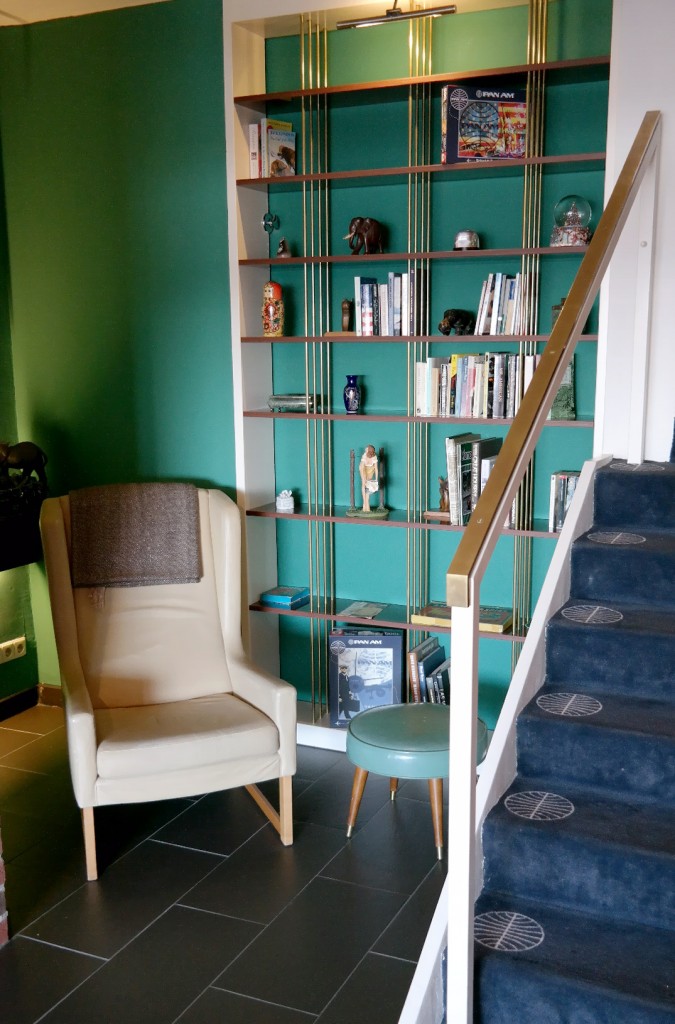 “Sixties design never got old”, says Natascha Bonnermann. “It got either more appealing.”

However the true treasure slumbered one floor under the lounge: a small maisonette apartment, that was inhabited by the Pan Am pilots and still gives the feeling, that a man with suitcase could enter the room just in every second: kidney-shaped tables and 60s chairs in front of clinker-chimney and wallpapered doors. 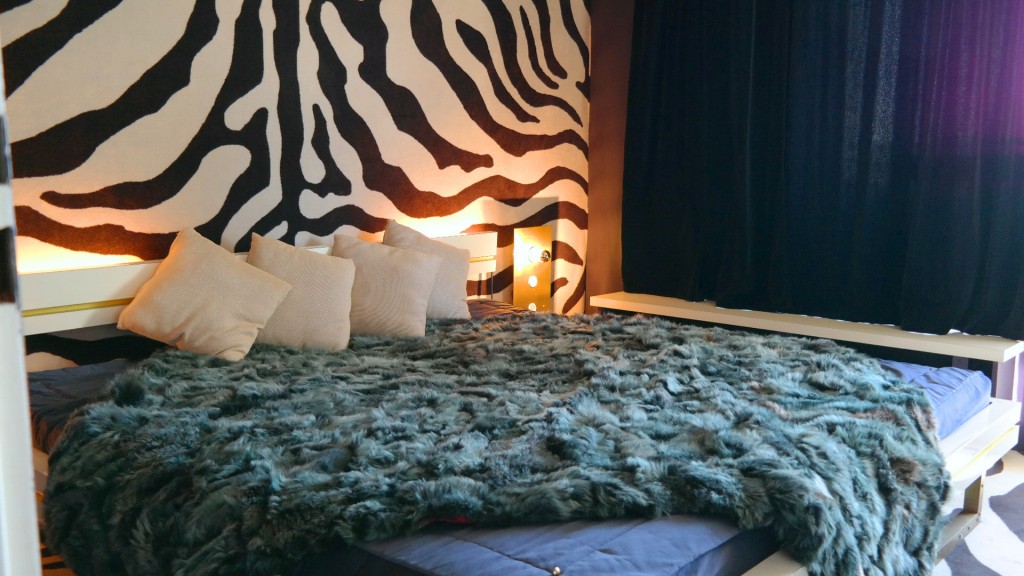 Natascha Bonnermann about the bedroom equipped with zebra printed carpet: “Modern sex appeal that promises a lot and keeps everything.”

In the lower part of the apartment-suite one will see an original 60s kitchen including a bar, as well as a sleeping- and living room on the upper floor (whose walls are covered with zebra printed carpet). What might have happened at this place?
Even nowadays a former Pan Am stewardess, who likes to remind herself of the wild 60s, still lives in the apartment building ‘Eden-Haus’. The best partys in town, which have been celebrated there. And are even celebrated nowadays. BvH 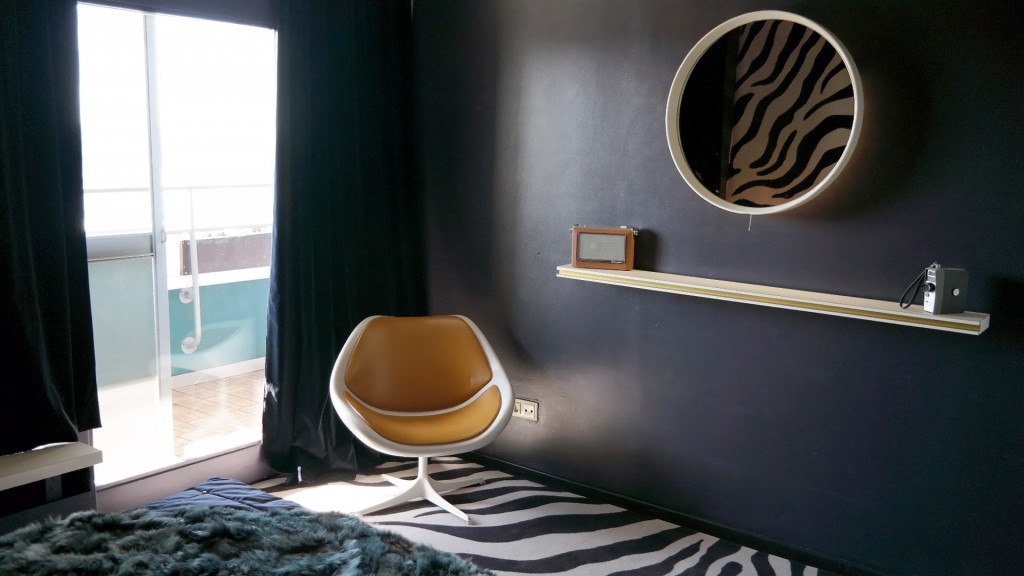 Here you can still sleep well – because the suite is rented 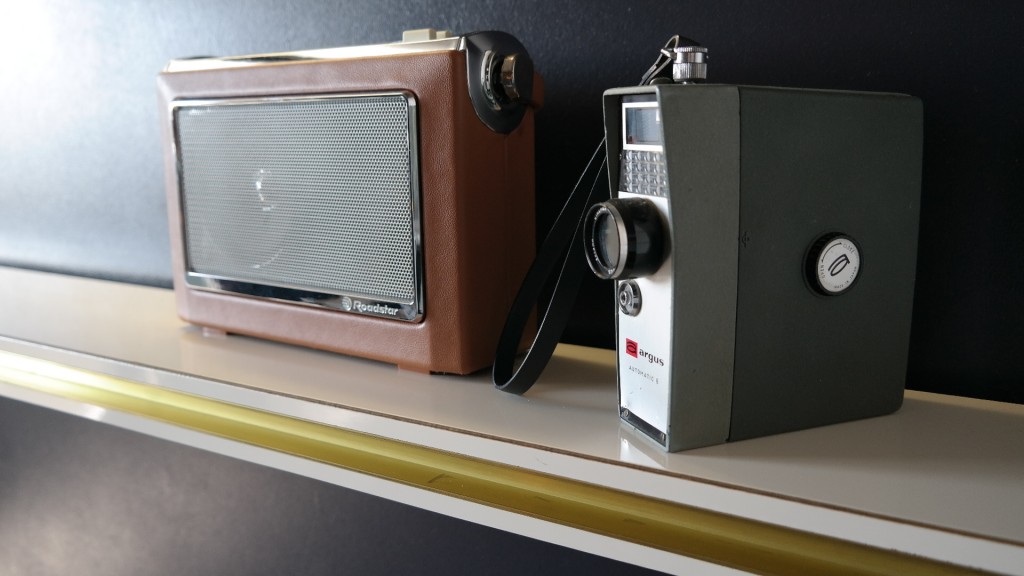 Home cinema: the crafty pilot deposited a camera towards the bed 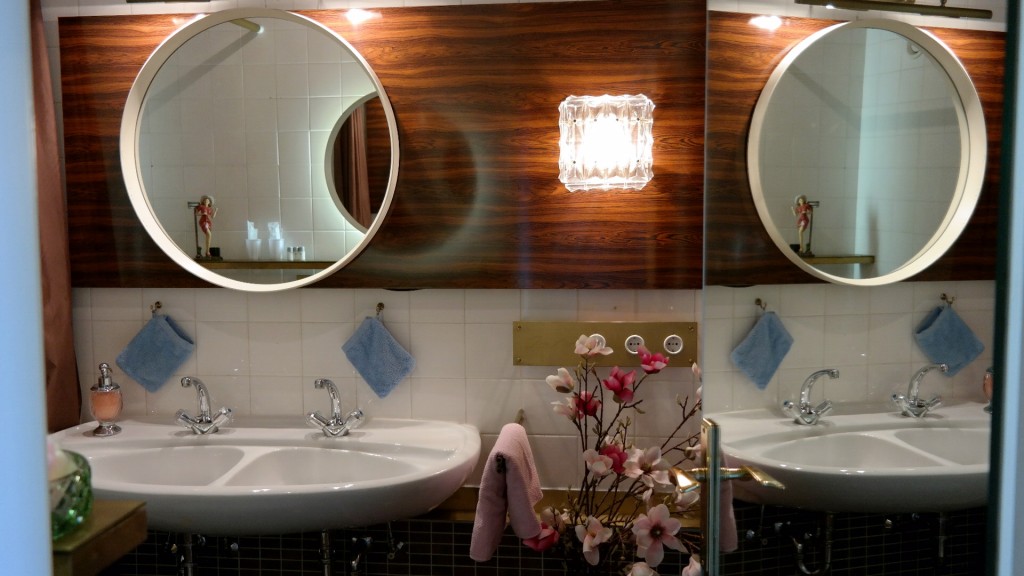 Beautiful, the violet floor tiles, right? Also the bathrooms of the Lounge and Suite are originally preserved 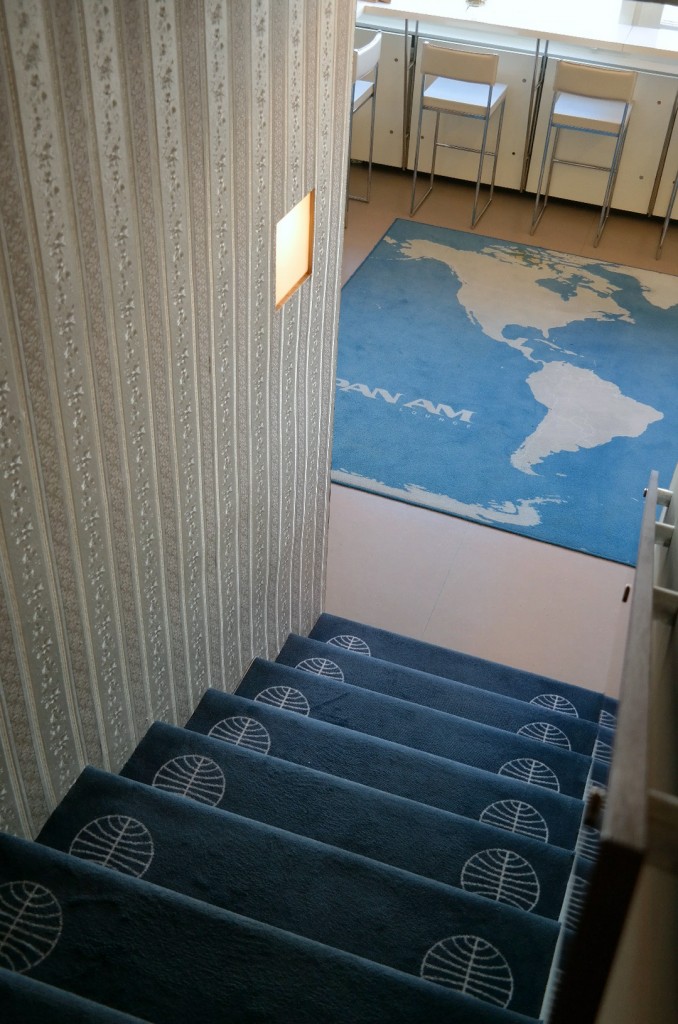 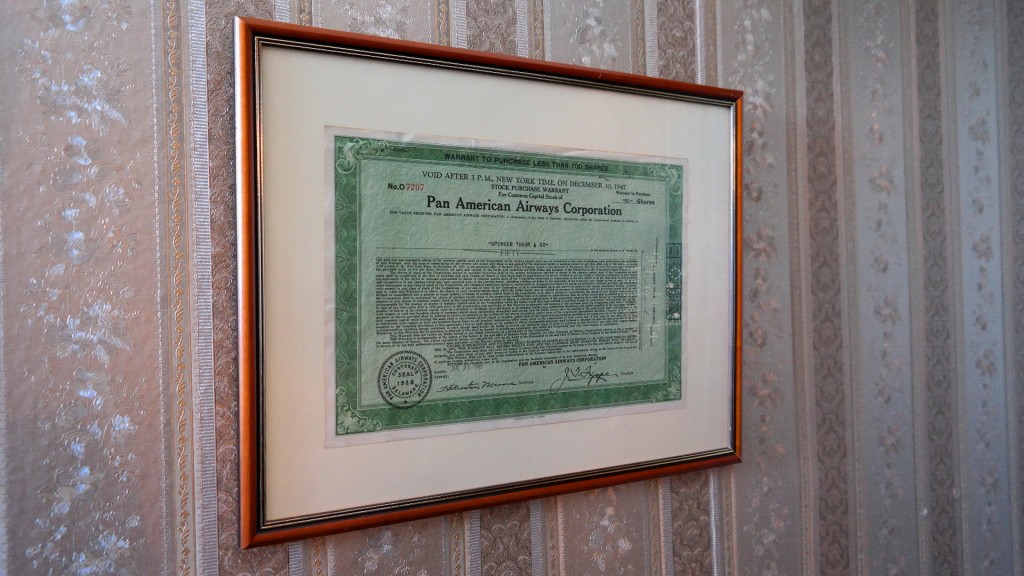 A Pan Am stock purchase warrant: The pilot was a shrewd investor – until the end of the 80s the airline went bankrupt 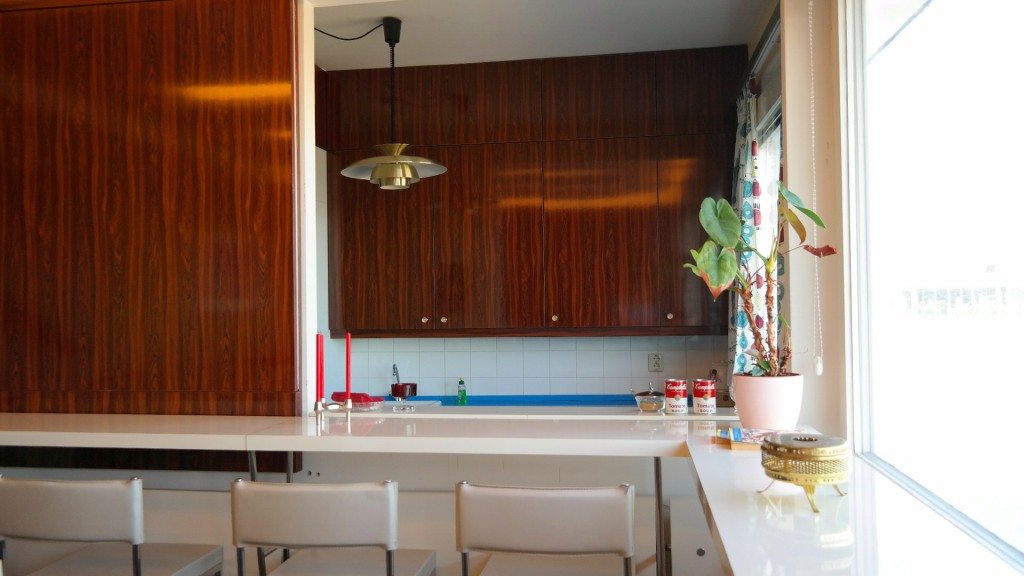 Kitchen with bar: here’s everything in proper sixties style 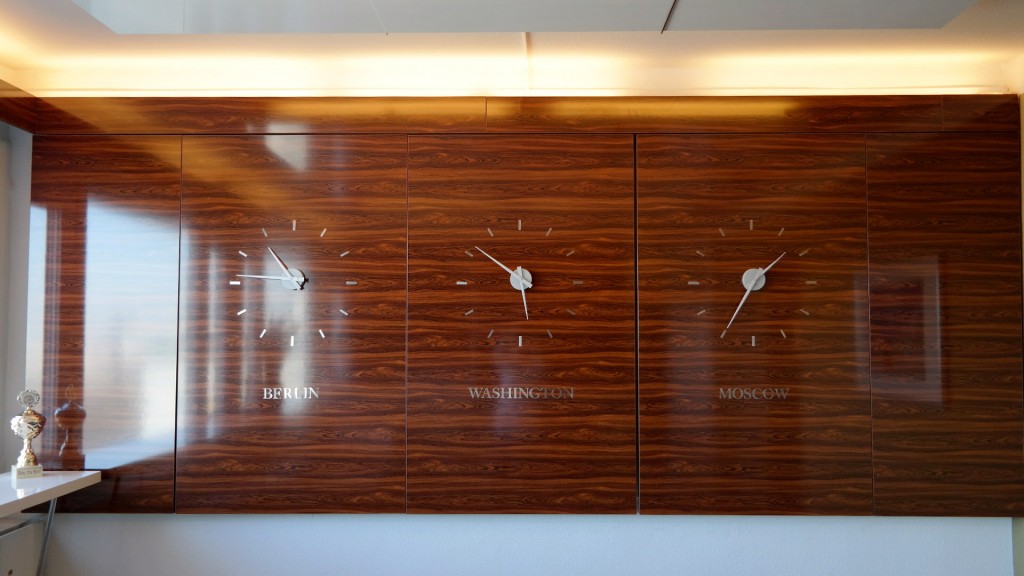 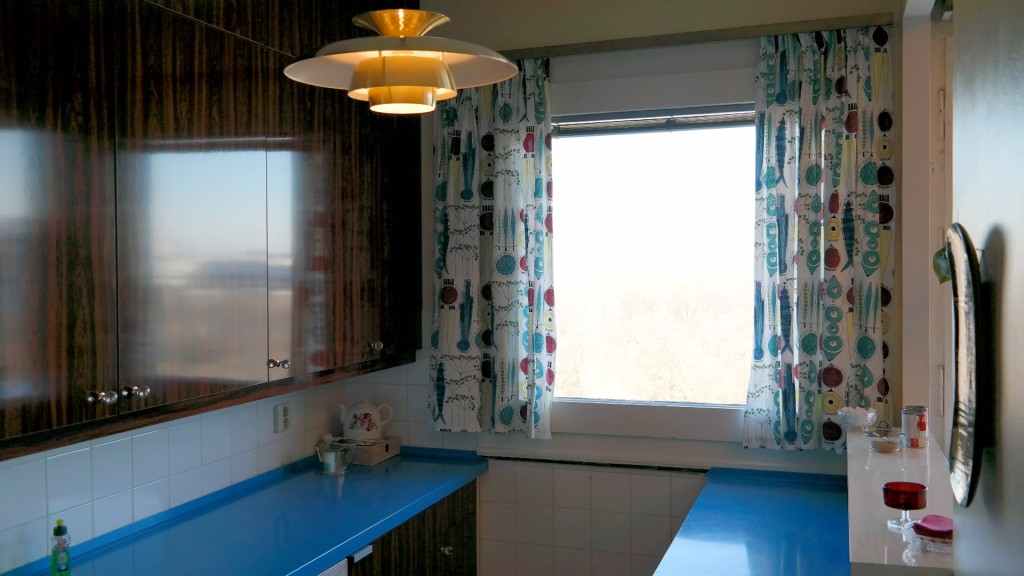 Take a look into the kitchen – how about the pattern of the curtains? 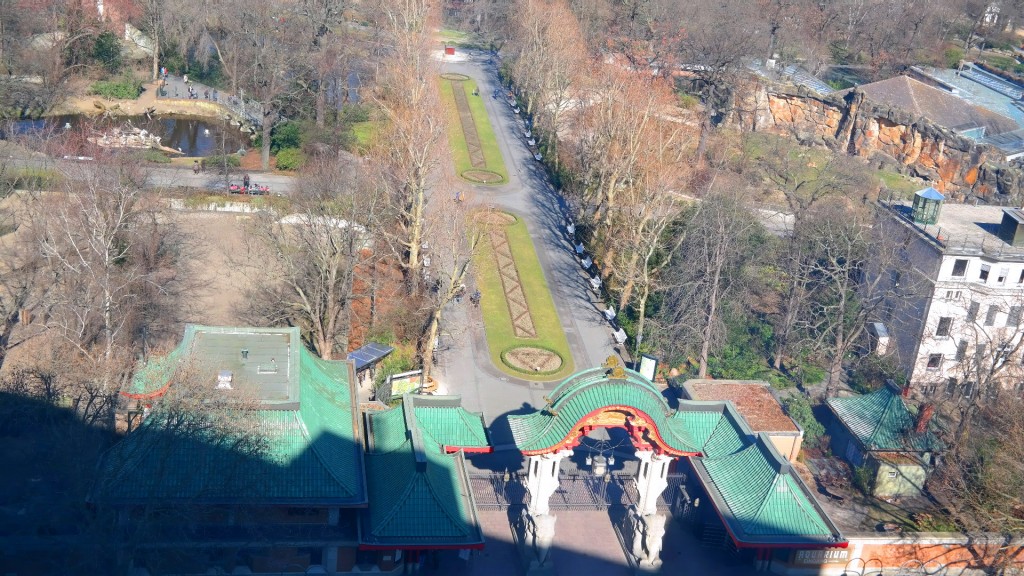 Foresight: from here you can see all over Berlin and into the ‘Zoologische Garten’ 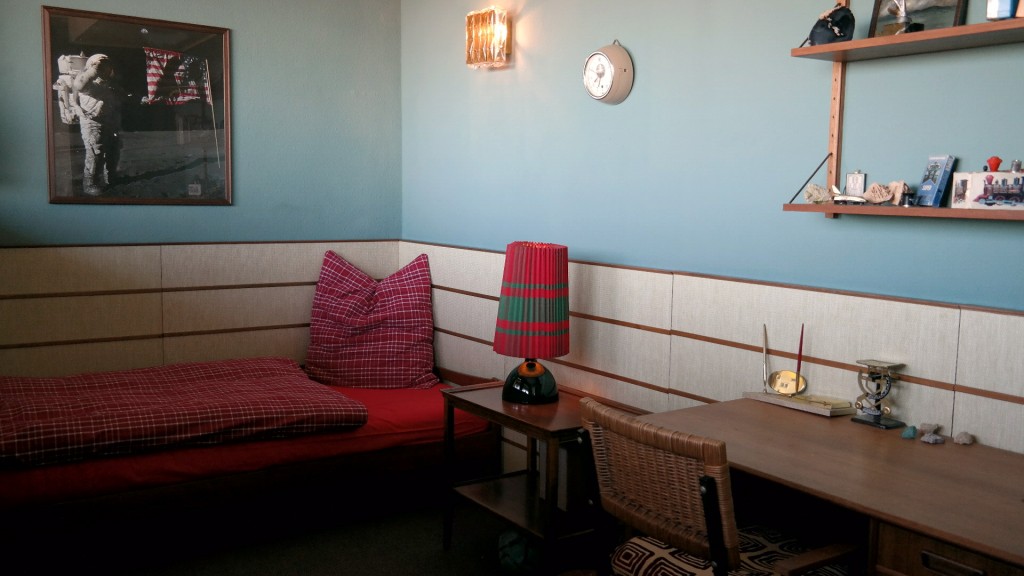 In the duplex suite, there is also a children’s room on the upper floor 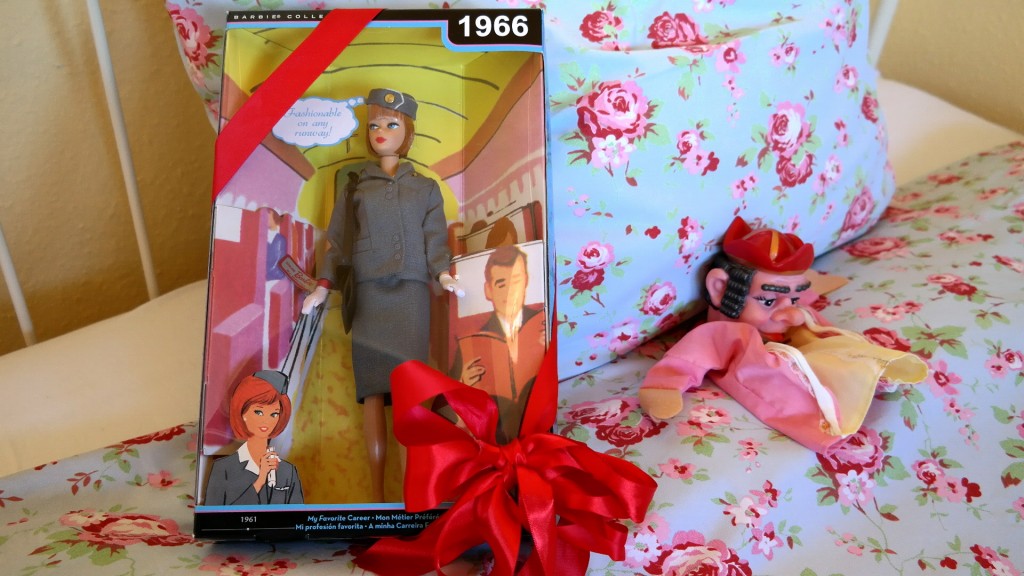 “Some things had to be superseded”, explains Pan Am Lounge Manager Natascha Bonnermann, “therefore I have my secret sources everywhere.” 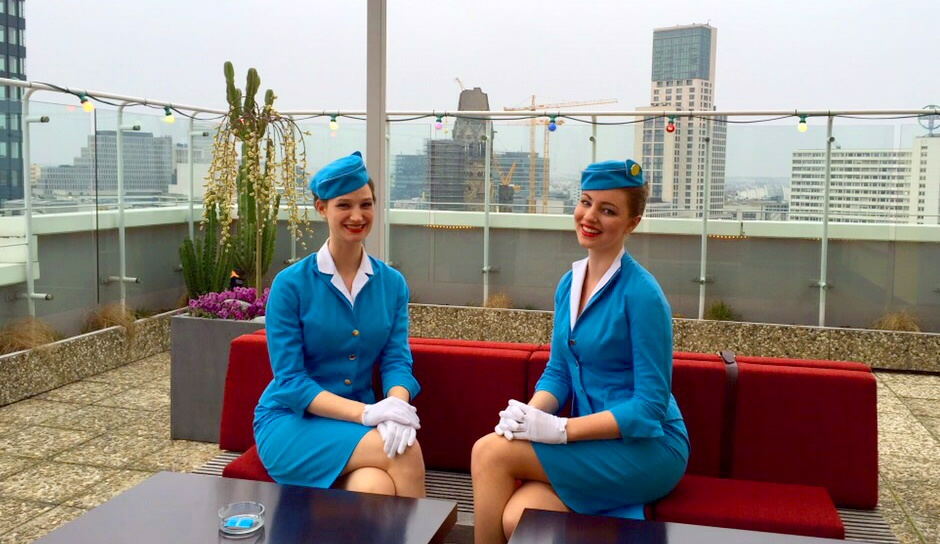 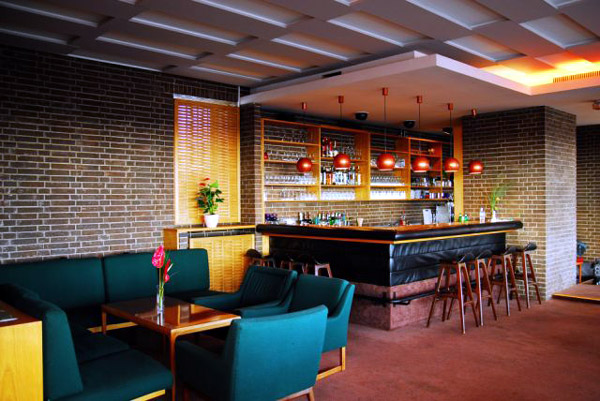 The Pan Am Lounge – the legendary party-location in Berlin

Info:
The Pan Am Lounge can be rented for events up to 200 people. The suite offers space for 30 guests.
Contact:
Pan Am Lounge
Budapester Str. 43
10787 Berlin

Comporta: Insider tips for Portugal’s hidden coast
What: Alentejo coast and Comporta Where: Portugal   I must…