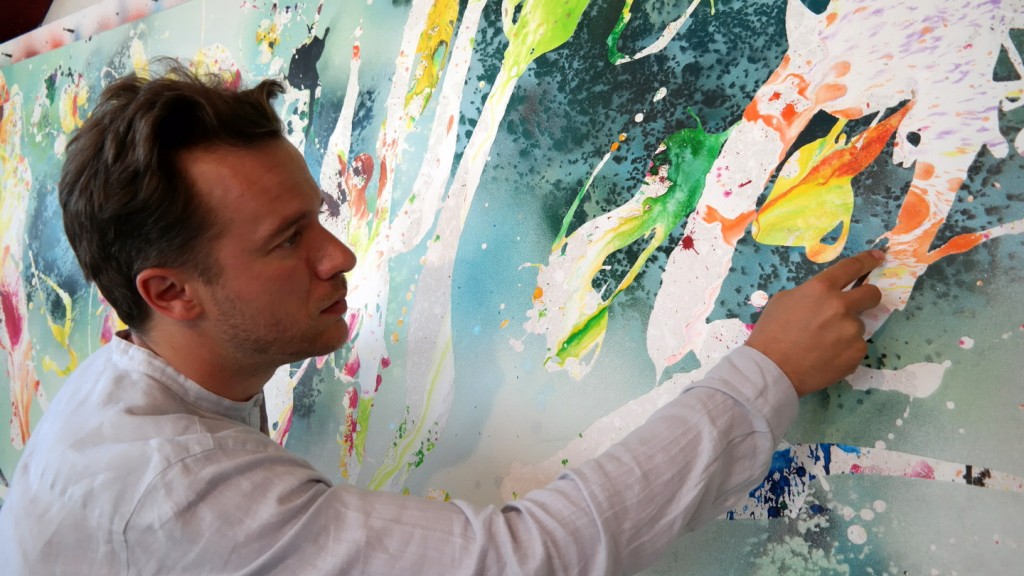 Christian Awe’s paintings arise, while sprayed patterns are overlapped by lots of layers of acryl color, in order to expose them at some points afterwards again

Christian Awe dabbes his eyes with Aloe Vera: “Apparently this helps with sunburns”, he says, pointing to the redness beneath his right eye. “I underestimated the sun in Gießen.” Here, the Berlin artist holds lectures on Urban art at the Justus Liebig University. He used to illegally spray-paint walls of houses, today he is an internationally recognized artist. 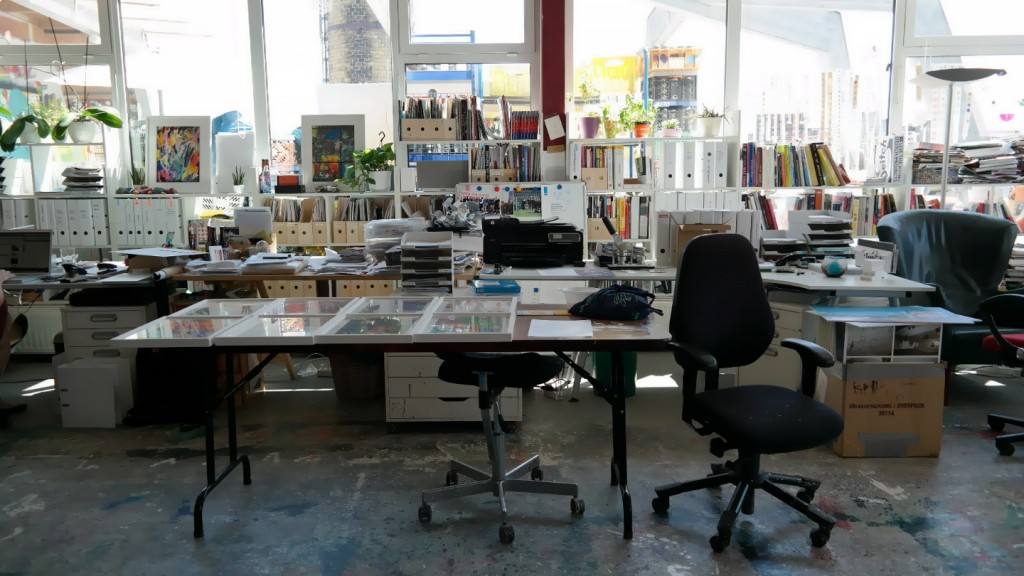 „A certain amount of chaos is pretty beneficial and also somehow inspiring for art”, comments Christian Awe in his atelier-atmosphere with a wink

A visit to the studio of Christian Awe in Berlin Lichtenberg: a large bright room, cluttered with large format canvases. Colors in different variants. In the background a sofa corner. Why has he opted for the working-class district of Lichtenberg, where there seems to be quite attractive areas in Berlin. “I grew up here, and travel around the world several months each year. This is my home, my anchor point.” Of course he would have already been living in Mitte-district. The Friedrichshain-area? Nah. Rather not. It’s too established, too touristy; it just lacks creativity. “Even in the Spandau-district more is happening. Lichtenberg was a tough district for years, but with good working conditions.” 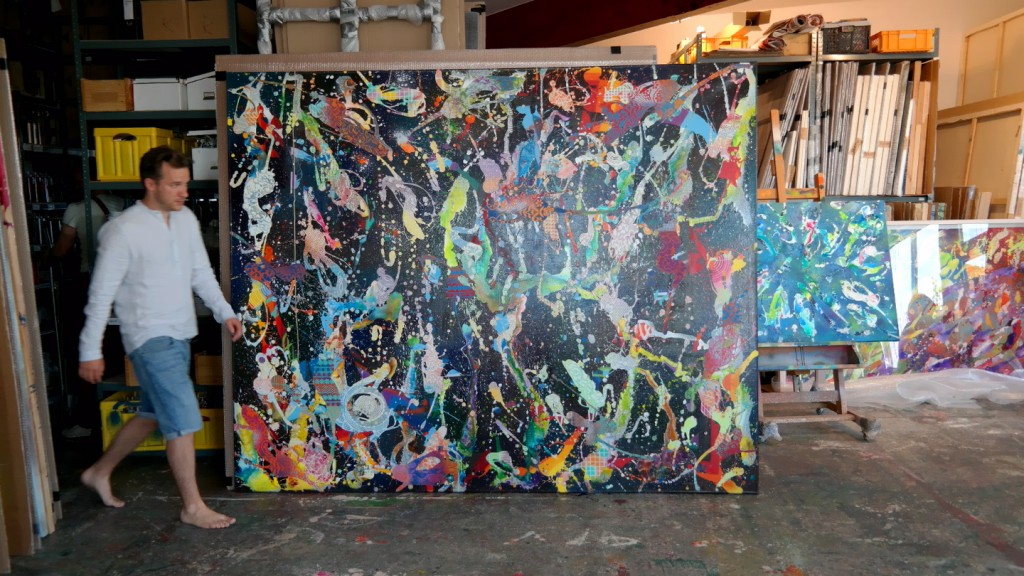 Awe, who studied at the University of the Arts in Berlin with Georg Baselitz, graduated as a master student of Daniel Richter, chose next to art the subject sports. Isn’t that a rather unusual combination? “No, not at all”, Awe laughs. “Painting has a lot to do with movement.” And he tells about the ‘Kunst am Bau’-projects (Art-in-Architecture) where he is acting partly in wind and rain in 33 meters height. Twelve weeks he worked for the wall painting in Lichtenberg , every day he had to go up the scaffolding 20 time. That’s 6 times down Mount Everest and up again. Wasn’t he ever afraid of heights? No, now he isn’t, it’s all a matter of training. “The truck swings up to one and a half meters. I sometimes ask myself, why I actually do this.” 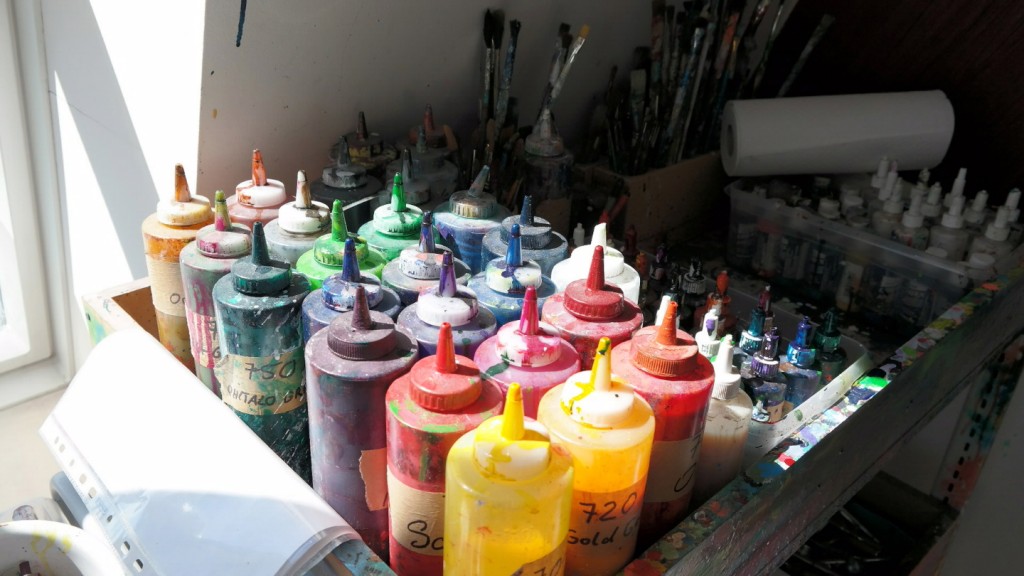 In fact, he has done a lot of sport, which earned him the title “German Champion” in streetball. “I always loved Basketball, but there wasn’t any in the GDR”, says Christian Awe and grins: “For us, it was called netball.” He tells how he experienced the fall of the Berlin Wall with eleven. There was a cultural vacuum, familiar structures broke away, the old sports clubs were suddenly gone. The kids were hanging out on the street. “Nevertheless, there was a lot of energy for the emergence of the graffiti scene, which was also an expression of that hip hop culture.” At that time, a cultural space developed, from which the hype Berlin still benefits. 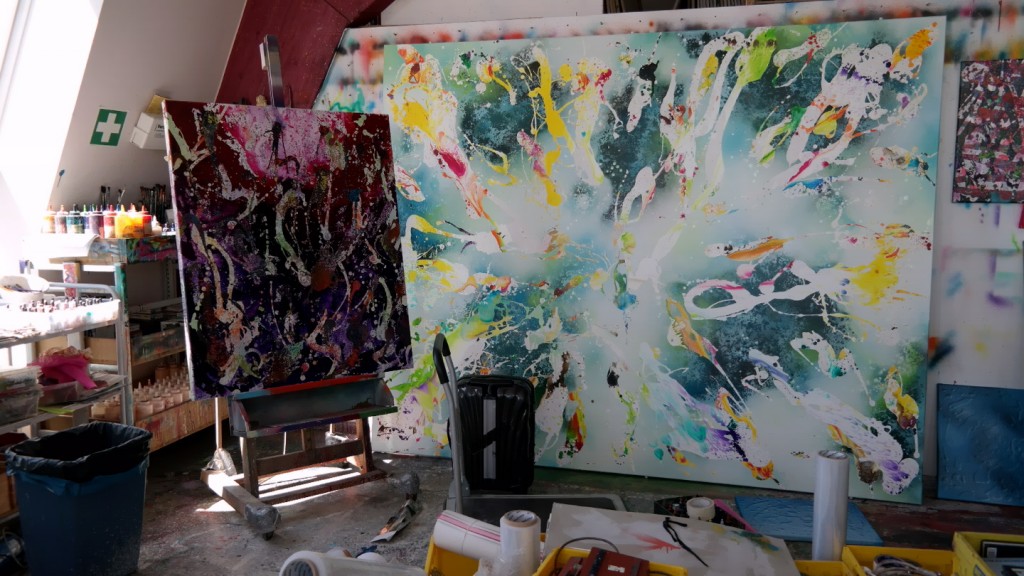 Art-works in progress and in the middle a suitcase: Christian Awe is always on the run

Christian Awe, who now can look back on solo exhibitions in Istanbul, Perm and Miami and has taught at Princeton University and at Yale, made the jump from the Urban Art to the art galleries. And he committs himself to others: charity painting in favor of SOS Children’s Villages, art workshops for young people and the project ‘The young Mesopotamia’ , which is about the reconstruction of art and culture in Iraq. Most recently, he supported the construction of a school in Burkina Faso, West Africa. 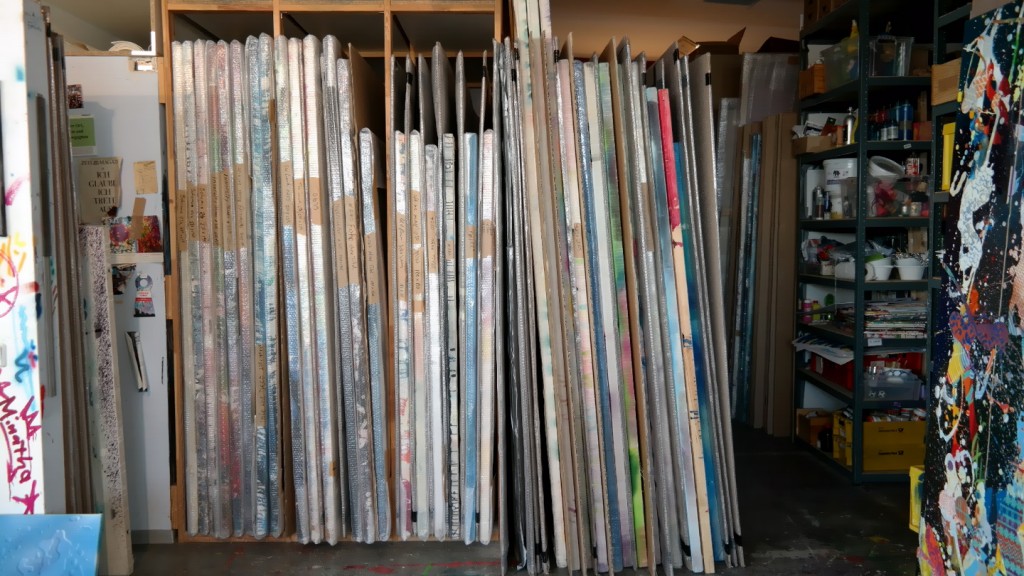 With his wall paintings, he wants to put a focus on the democracy of art. “Nowadays a lot is getting lost in our society, lots of people are excluded. I try to bring art outside, onto the streets. I think art and culture are the main components that hold our community together”, he explains his big pictures, of which the wall painting ‘Andanzé’ with the size of a tennis court recently got revealed during the Berlin Gallery Weekend in Schöneberg. 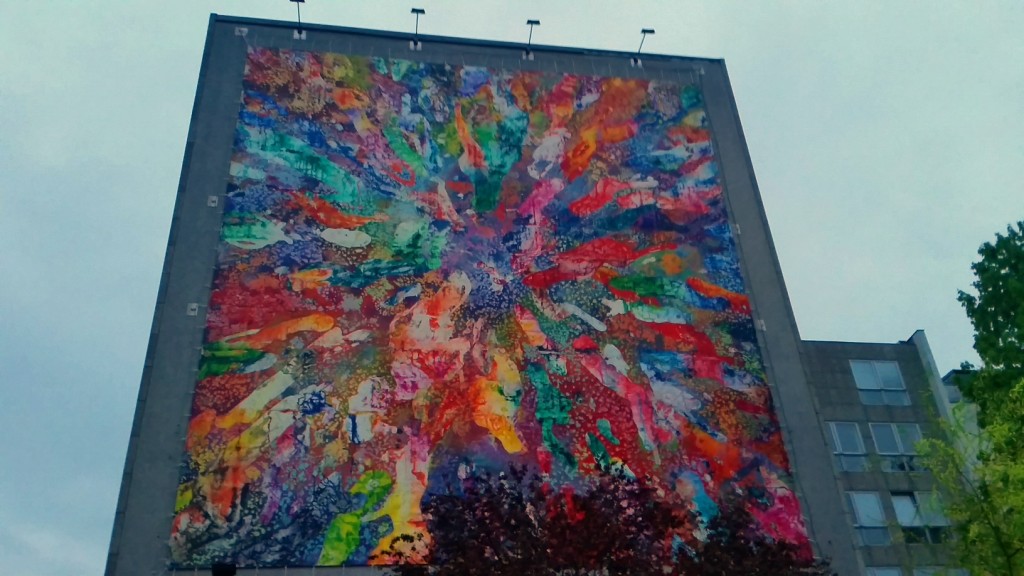 15 helpers were needed to install the wall painting Adanzé, which has the size of a tennis court, at the exterior wall 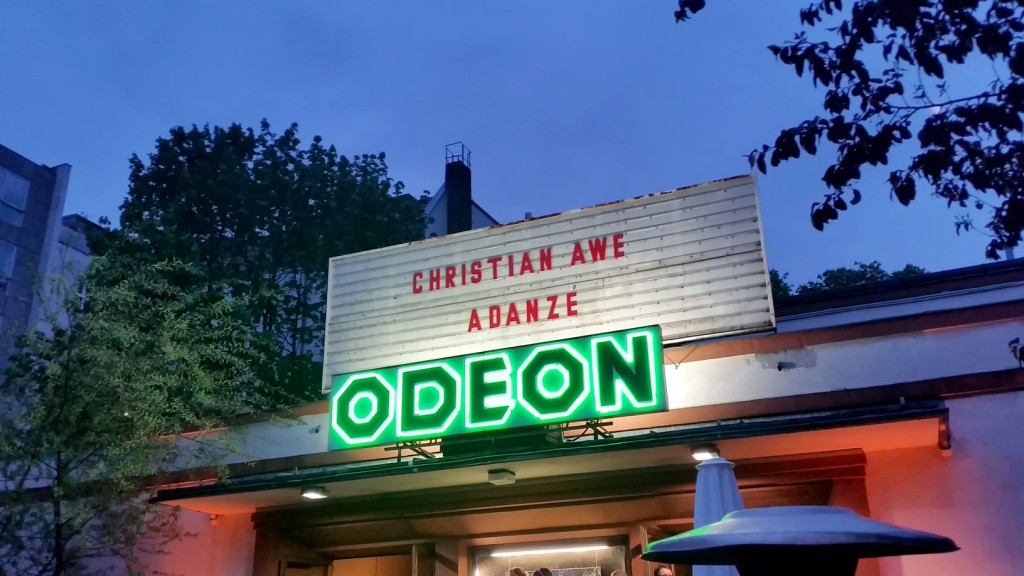 Only the wall painting in Lichtenberg is 500 square meters big. Apparently the difficulty is to translate the movement in the size. “Actually I prefer to start working just right away. But this is not possible in terms of such a big picture. There must be a draft and rough arrangements.” The Lichtenberger wall painting brought 36,000 points of transfer. Grids have been created and every point has been sketched, therefore 13,000 meters of tape were used. And he adds: “Every painting that is bigger than five meters is vast. That’s probably why so few painters, that are good in painting broadsheets, exist.” 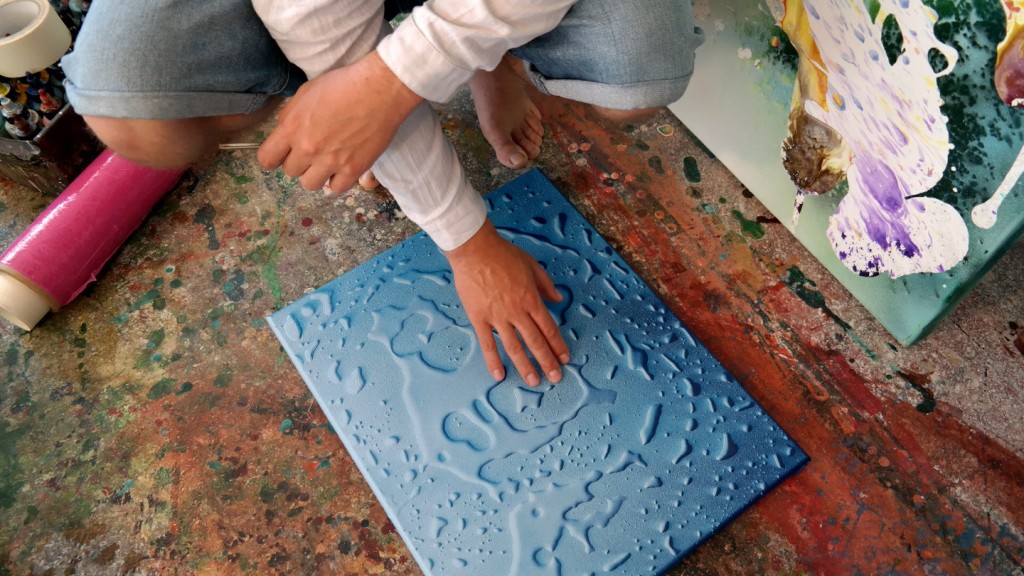 It seems like Christian Awe doesn’t like stagnations. Someone like him, who also gets up during the night to paint, always has a new project in the pipeline: a series of works, which seem to be mirrored in three-dimensional water drops. One stands in front of the painting and wonders oneself about the amazing, real effect. Those works are currently presented in the Dusseldorf gallery Ludorff within the scope of the group exhibition “Open Water” with works of other artists like Max Liebermann and Gerhard Richter. Definitely an illustrious society, you would think. “I’m kind of like ‘the new kid on the block’”, answers Christian Awe a little bit sheepishly, “but it’s pretty awesome to be shown on such a scope.” BvH 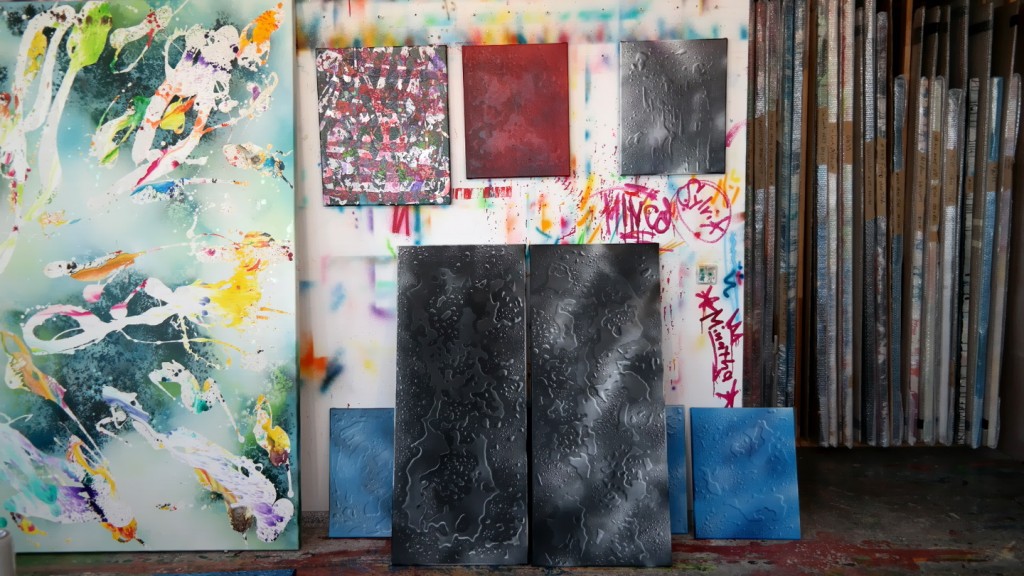 Some more of the three-dimensional water drops 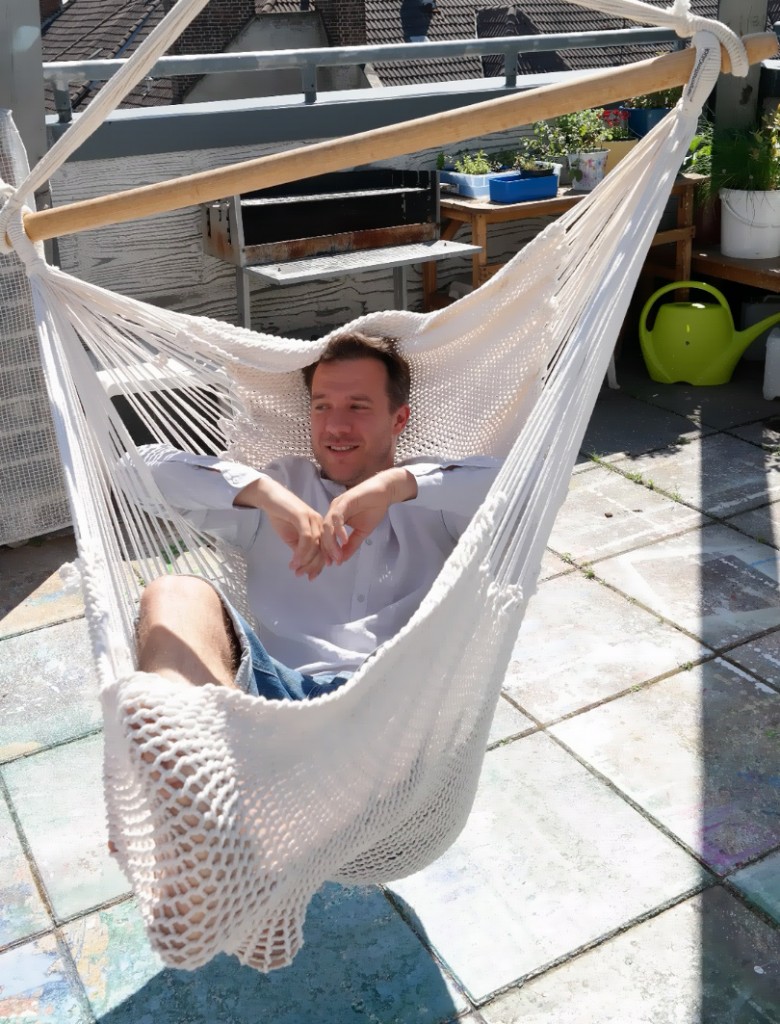 Time for relaxation is a must 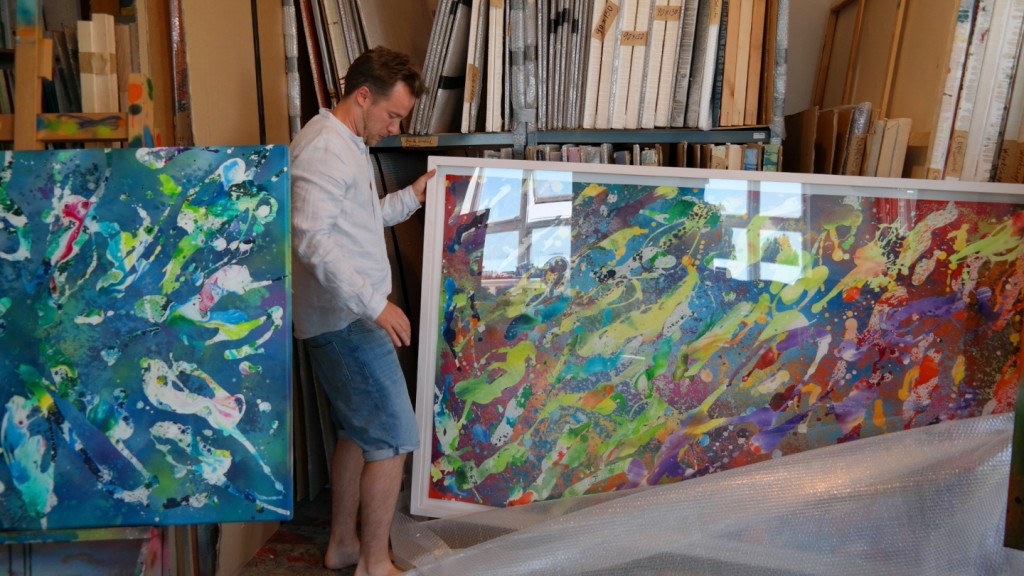 In actual preparation are exhibitions in the Berlin gallery Fahnemann, in Frankfurt together with the Deutsche Bank, the gallery Tristan Lorenz and also in the art association Bad Dürkheim as well as another ‘Art-in-Architecture’-project in Miami 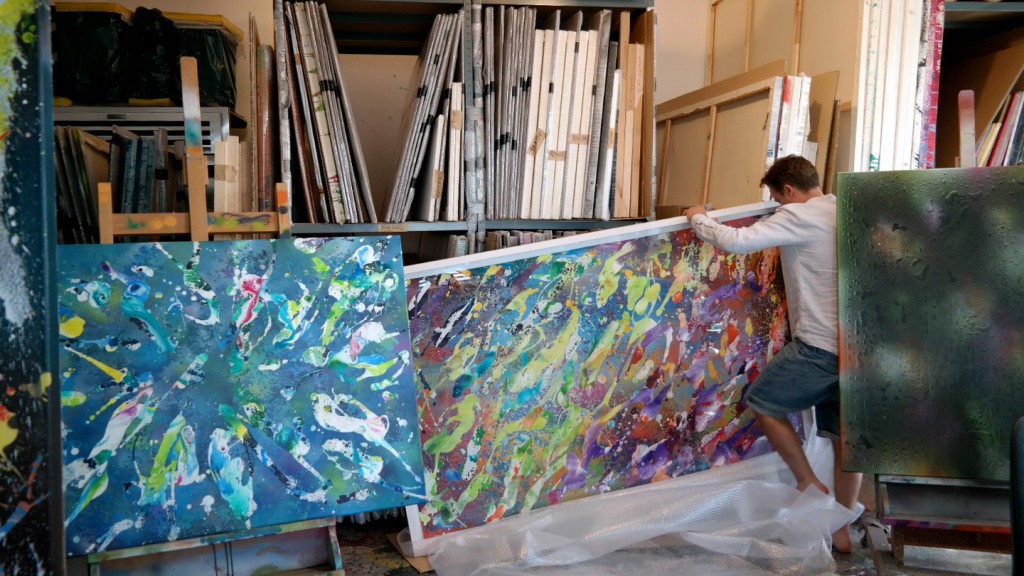 You can also see his previous works in his monograph, which will be released soon 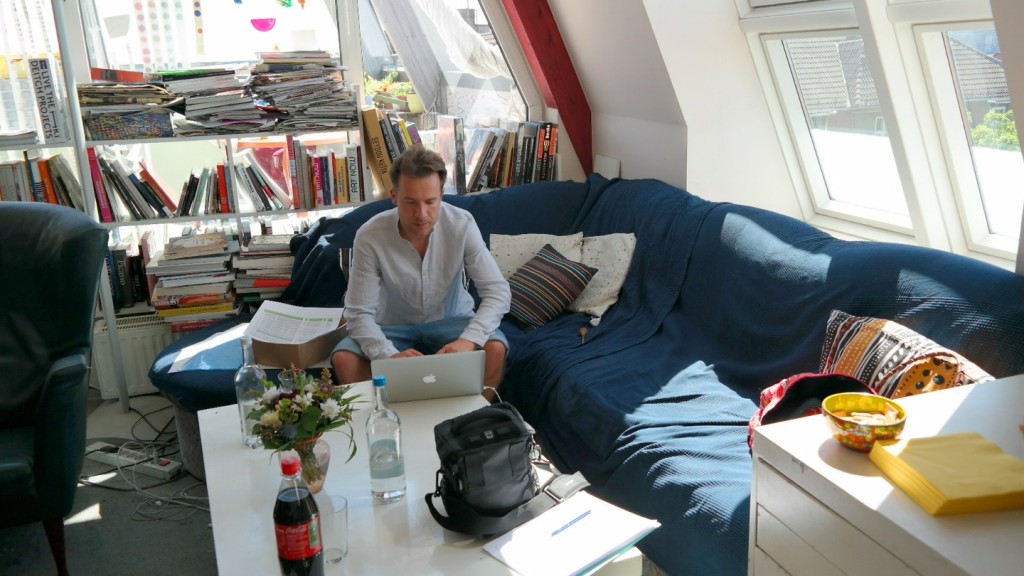 “The colorfulness of the graffiti era still shapes my paintings. Nevertheless, my pictures have nothing to do with street art anymore.”

A perfect day in Vienna
What: Places to go and Insidertips Where: Vienna, Austria I…

Skykitchen: Heaven above Berlin
What: Skykitchen, Restaurant Where: Berlin-Lichtenberg This cannot be the place,…