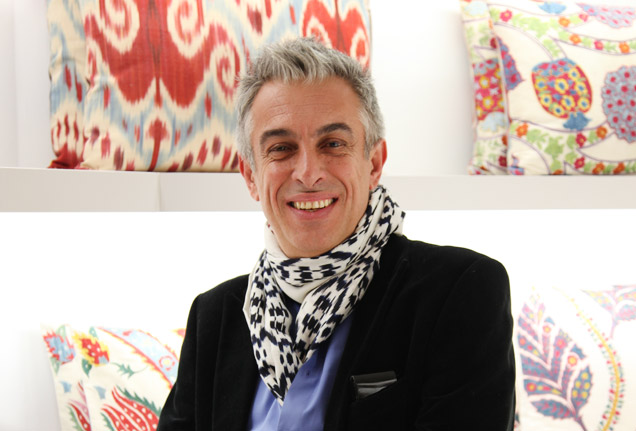 Rıfat Özbek was born in Istanbul, studied architecture in London, then moved on to study fashion at Central St Martins. In 1985 he started his own fashion line ‘ÖZBEK’ based in London

In 2005, Turkish fashion designer Rifat Özbek was looking for cushions to decorate his country home near Bodrum. Discouraged by the scratchy textiles and synthetic stuffing pervading the home décor marketplace, Özbek and his partner, Erdal Karaman, decided to design their own pillows, an endeavour that led to the launch of Yastik – Its name means ‘cushion’ in Turkish. Now, ten years later, Özbek has shops dedicated solely to cushions in Istanbul, Izmir and London, as well as retail spaces in exclusive department stores such as the ‘Bon Marché’ in Paris.

Rifat Özbek received twice the “Designer of the Year” award by The British Fashion Council. His work has been featured in many exhibitions including the Victoria & Albert Museum, the Pecci Museum in Prato and the Stedeligk Museum in Amsterdam. This pic shows the shop in Istanbul

What sets Özbek’s designs apart: incredible textiles, rich and intricate patterns, and high-quality down stuffing, which includes dried lavender. Özbek’s attention to detail contributes to his unique vision and steady success. While the back of a cushion might be overlooked by others, Özbek treats the back panel as of equal importance. In fact, the designer intends for both sides of the cushion to be used, and the ‘backs’ often feature contrasting patterns or colors. “Just like a small brooch can uplift a dress, cushions are the brooches of sofas”, says Özbek.

“Yastik means cushion in Turkish, and that is quite simply all we sell”, explains Rifat Özbek. For starters, there are one hundred different colors and patterns to choose from

Yastik stores, including one in Istanbul’s Nişantaşi neighbourhood, are an experience all their own, with dozens of varieties of cushions displayed against stark white walls, creating a gallery effect. At any given time, Özbek stocks more than 100 patterns, drawing inspiration from everywhere: the Majorelle Garden in Marrakech, tribal contemporary paintings, and centuries-old mosaics and tiles.

The pillows come in three sizes, in both rectangular and square shapes, and range in price from 60 €

Each cushion design is produced in limited runs. “You don’t want to go to someone’s home and realize you have the same cushion,” he says. “We keep adding new patterns all the time, and there are some cushions, like those made from vintage fabrics like antique velvet, that we only make a single pair of.” BvH

Sourced in remote areas of Central Asia and Uzbekistan, these centuries’ old textile designs have their own language and stories are told using colour, weave and pattern

To add the ultimate sensual touch:

A handful of lavender flowers is added to the luxurious down filling in each cushion: “Just enough to suggest a sense of tranquillity.”

A handful of lavender flowers

Patterns and motifs change. It always come back to new designs

Gerhard Gössl – the master of garps
Who: Gerhard Gössl, Entrepreneur Where: Salzburg, Austria Best of MyStylery…