Who: Hubertus Hoffmann,
Internet Entrepreneur and Art Collector
Where: Berlin

Livingroom: The painting by Mauritius (1987) shows Sigmund Loewe, the inventor of television next to the physicist Albert Einstein. Sofa by Living Divani, Vintage chair by Hans Wegner

A cool new building in Berlin, in the attic of the summerhouse there is a modern living room with several floors – Japanese Zen-garden inclusive. The man of the house is a bustling businessman, a cosmopolitan, who finds the balance to his intensive travel life in the growing of orchids. Of course with the appropriate greenhouse. 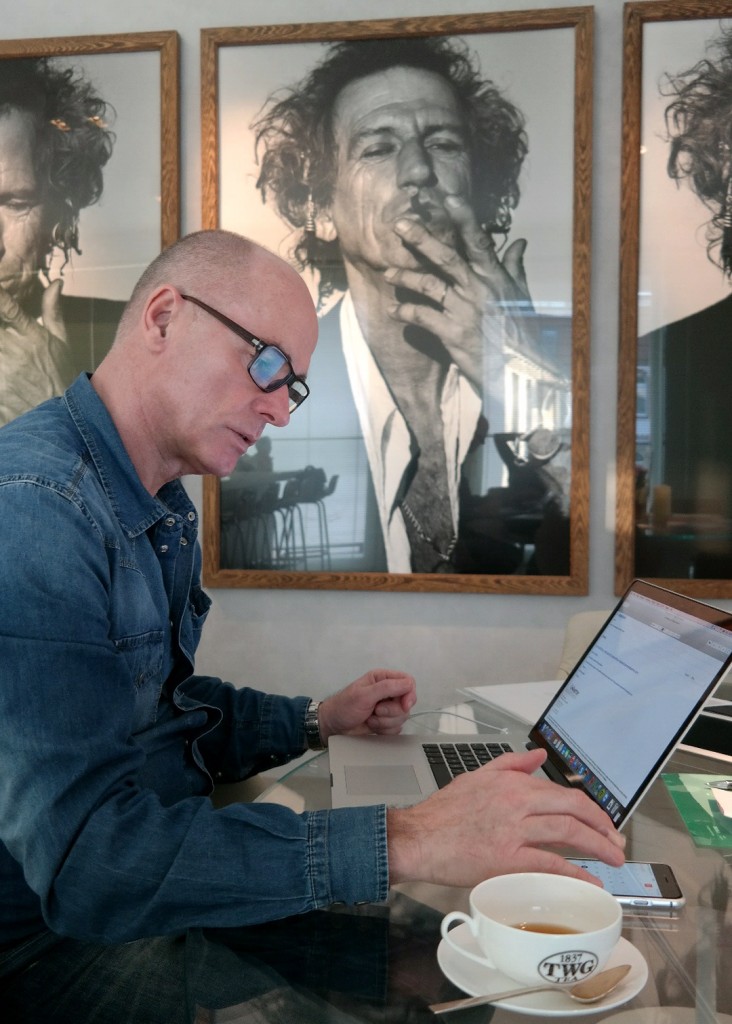 MyStylery: Growing of orchids is an unusual hobby for a metropolitan amid a metropolis like Berlin…
Hubertus Hoffmann: True. But these plants amaze me since the age of 16. It’s not about money or stocks, but about beauty and exotic. The greenhouse is my romantic little jungle. 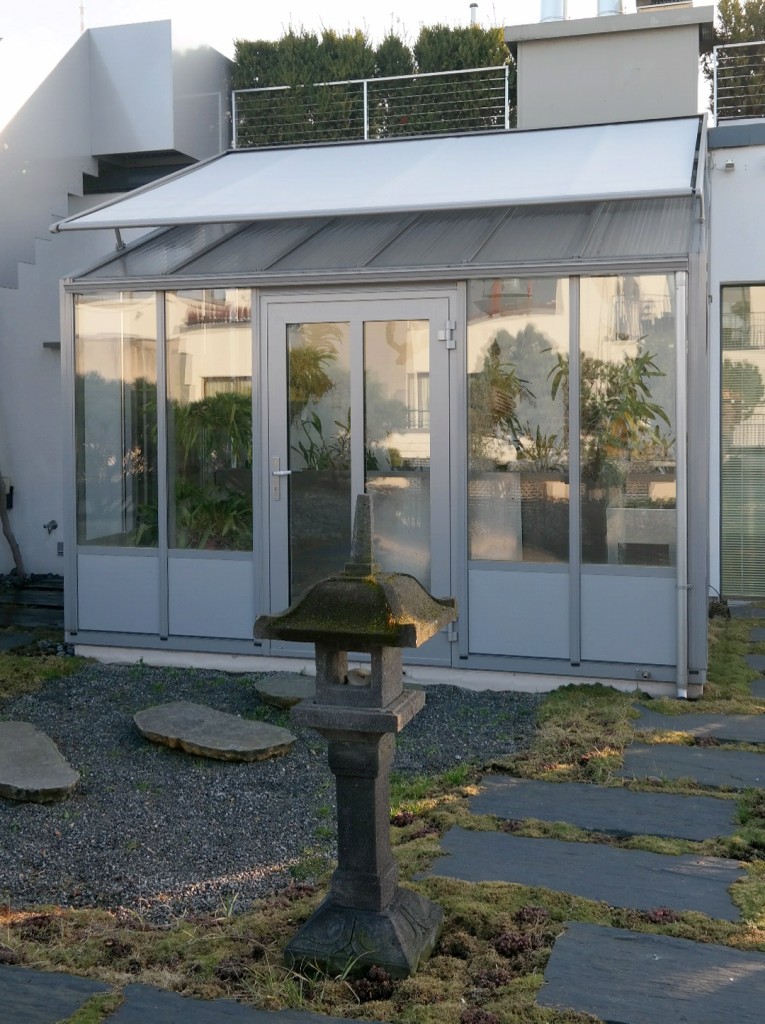 Zen garden and green house on the roof top terrace

MS: Your roof garden is a little green dream. Was it the inspiration for the initiative “Green on the Roof”?
HH: Unfortunately there is less and less green in the cities, but huge, unused roof surfaces. Our target of more than 500 supporters of “Green on the Roof” is, to greening half of all roof areas over the next few years. This is technically feasible. Regrettably, the 100 year old, antiquated authority regulations are often in the way, they must be adapted to the needs of today. 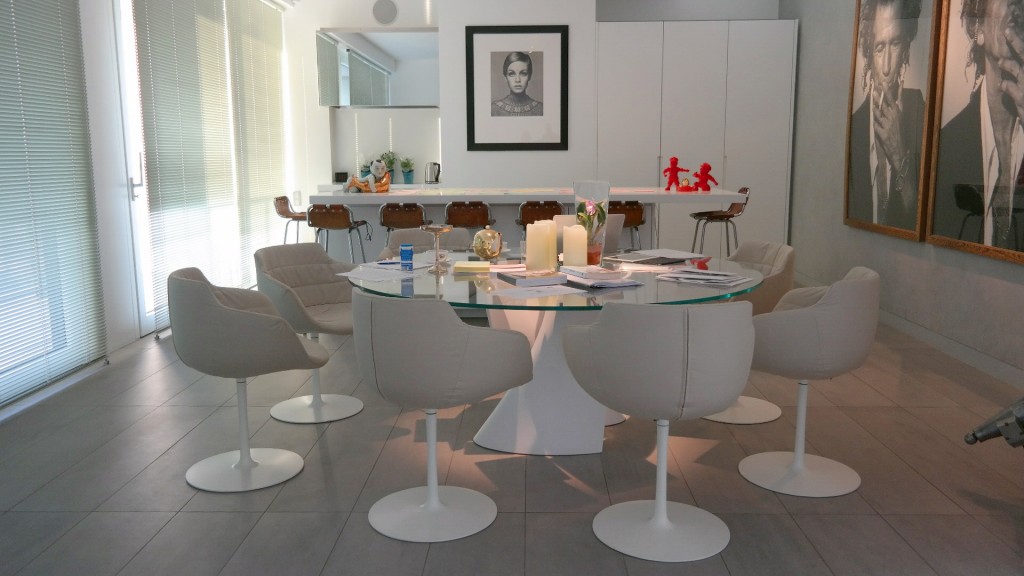 Dining area and open kitchen with a portrait of Twiggy

MS: You lived in many international cities. Is there something you miss in Germany?
HH: A lot of the Germans often lack the humor, the airy. Same applies to their flats. Most of them are still fun-free zones and also stuffy. 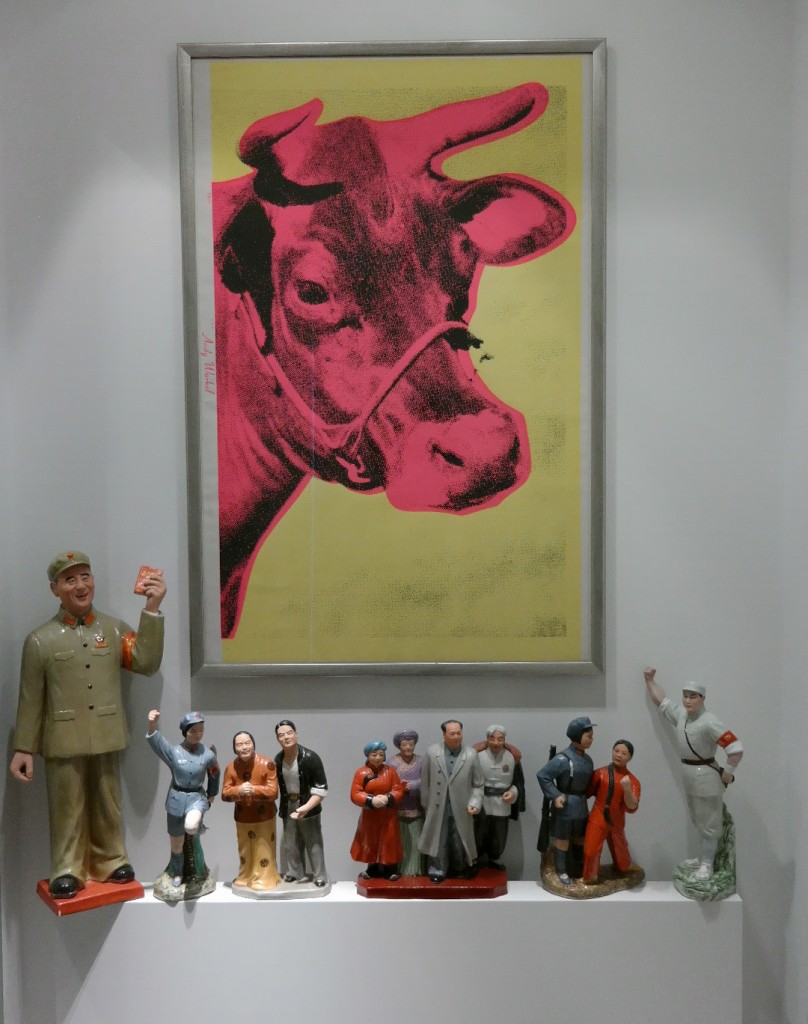 The reception committee in the entrée is “revolution kitsch” from China. Andy Warhol’s “Cow” keeps an eye on it

MS: Apropos: You draped a funny welcoming committee in the hallway…
HH: …that is revolution kitsch from China. The porcelain-figures I spotted at a flea market in Hong Kong. Above Mao and Co hangs the pink cow from Andy Warhol, that’s a good contrast, isn’t it? 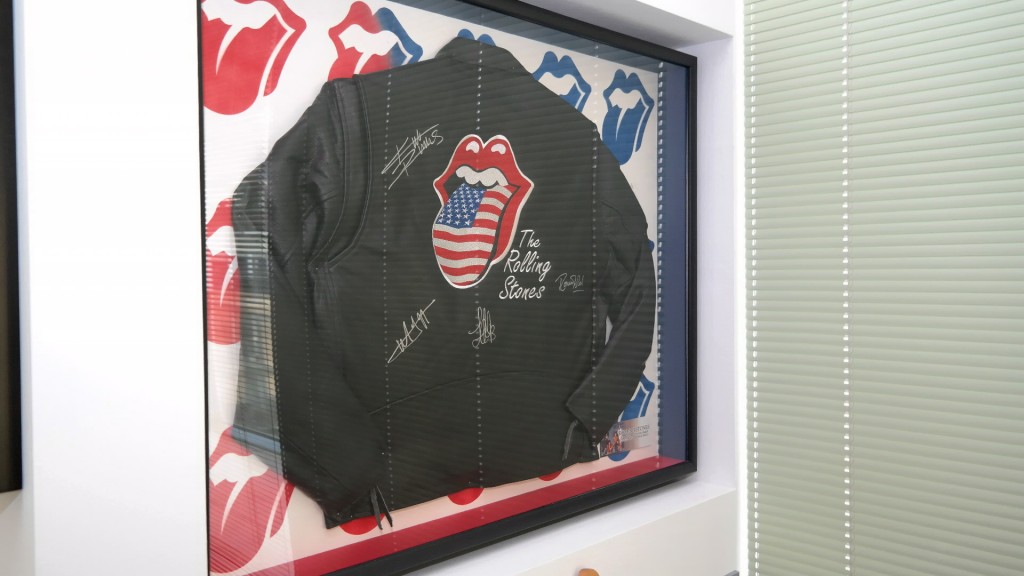 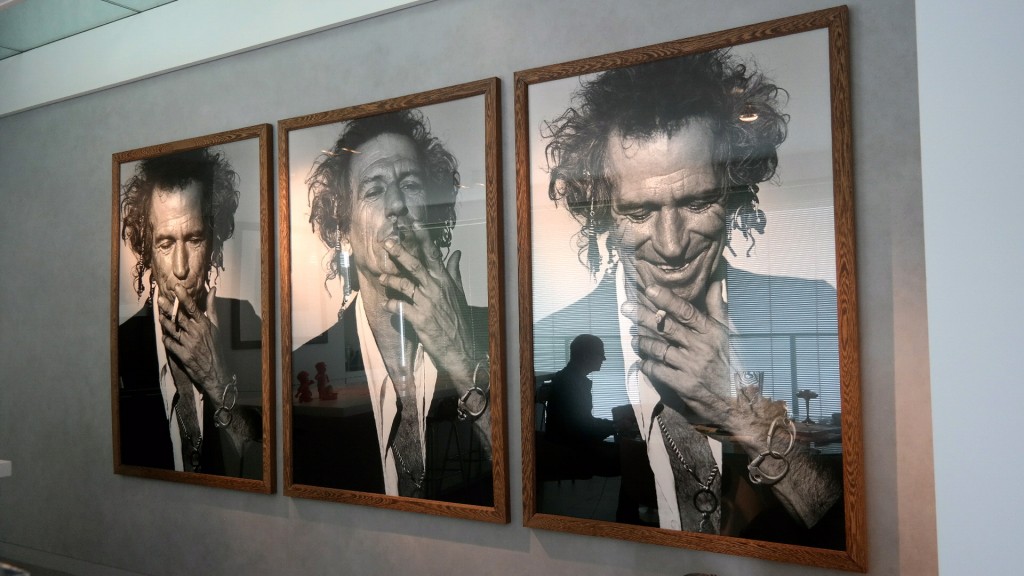 The photos of Keith Richards have been shooted by Peter Lindbergh 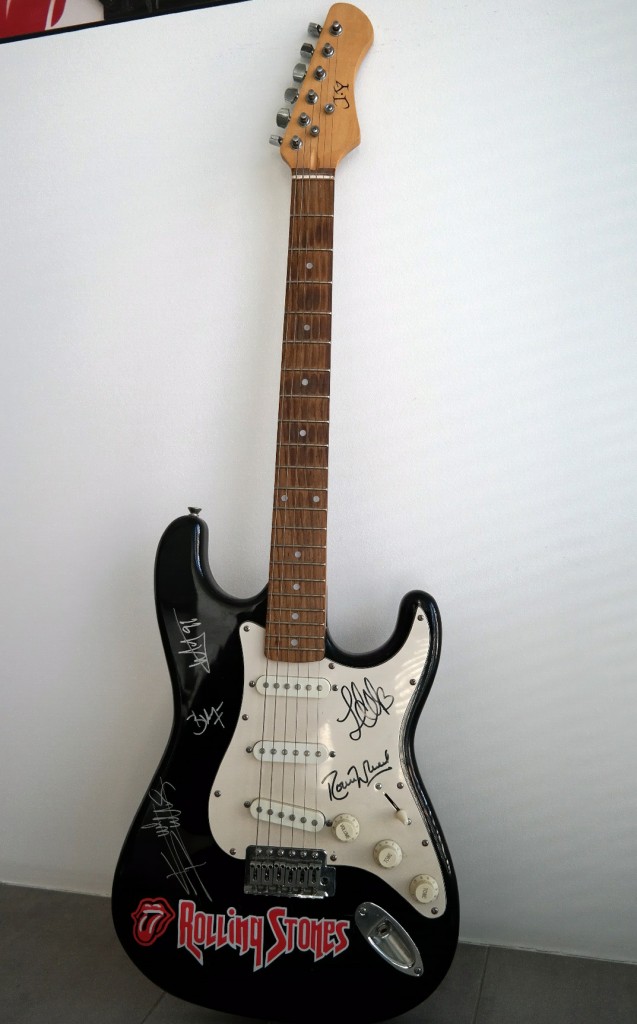 The guitar of the Rolling Stones signed by all band members

MS: Absolutely. What about the framed biker-jacket?
HH: This one’s from one of the last concerts of the Rolling Stones in the USA, beneath is a guitar from a Stones-concert. All members of the band signed it. But I also like the Bismarck-portrait from Lenbach from 1897, which I bought at an auction. Besides stands the officer sword of my father. Every piece has its relevance. 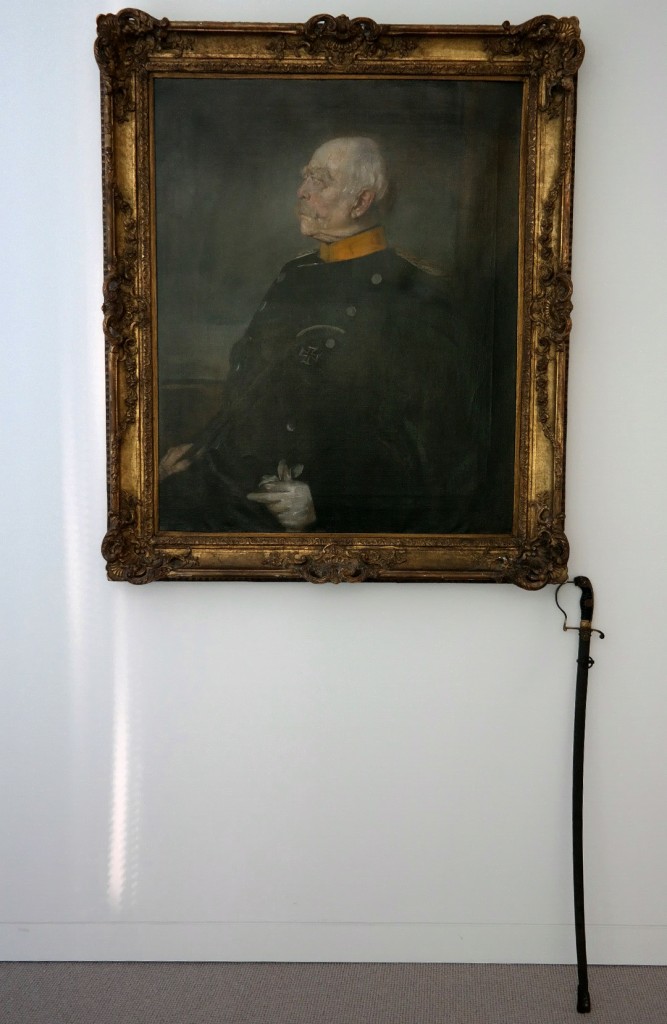 The Bismarck portrait was painted by Franz von Lenbach in 1897, below the officer’s sword from Hubertus father 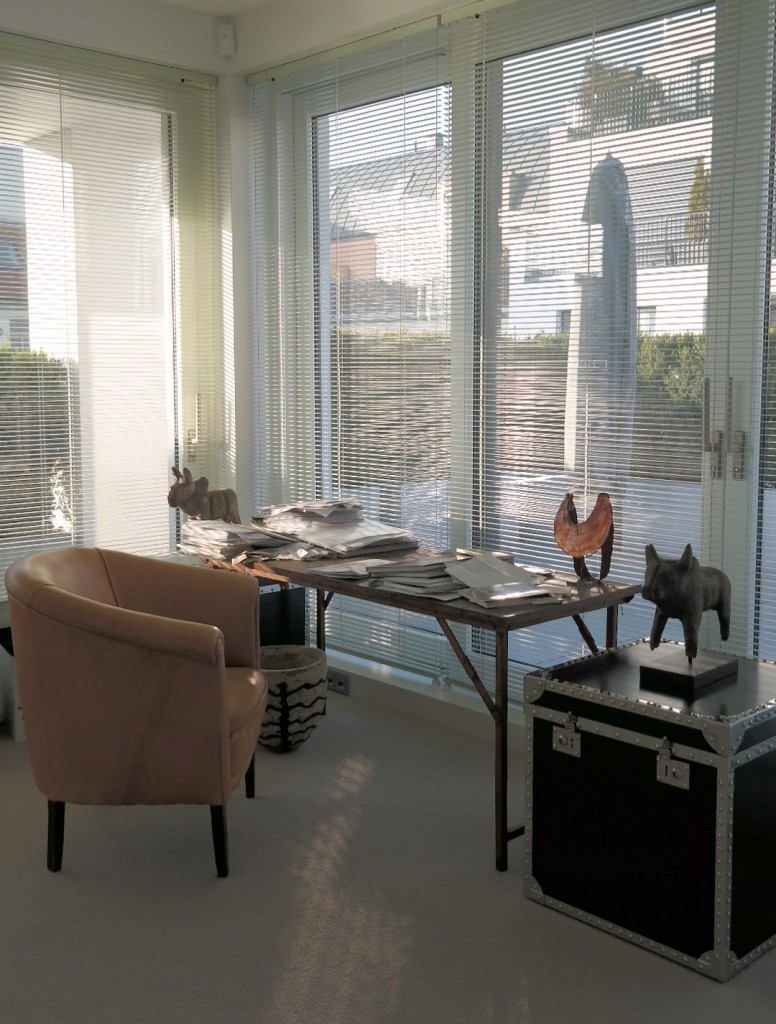 The home office of Hubertus Hoffmann

MS: Which piece are you especially proud of?
HH: In 1988 I bought a poster from Gerhard Richter for 50 DM in my hometown Goslar by the Harz, when he got the Kaiserring. Back then he also signed the “candle” for me. Today the painting’s value increased a thousand-fold. I also really like my little African collection; especially the antique headman’s chair from Ethiopia or the headman’s jewelry, both pieces cost 700 Euros only. 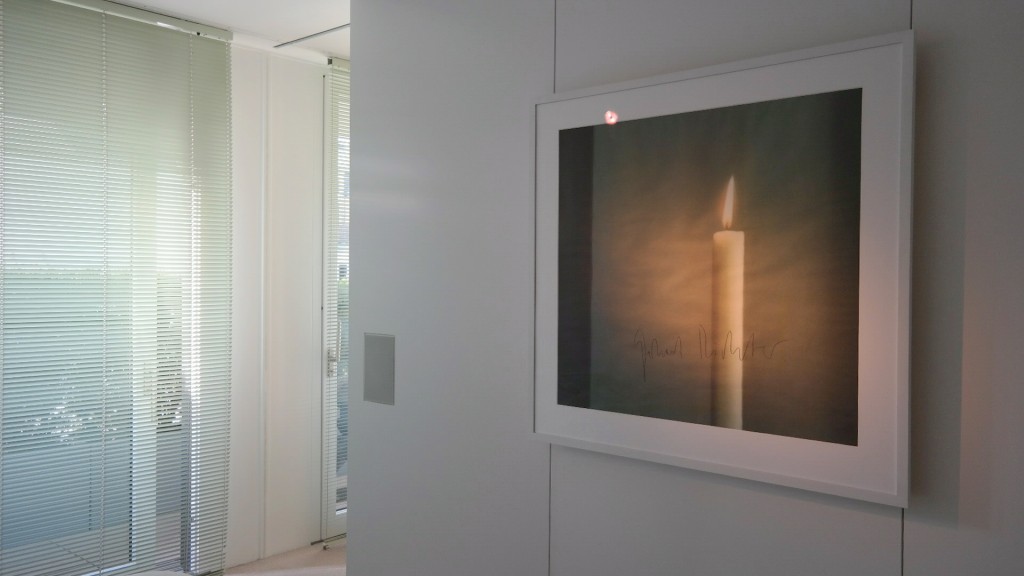 MS: A succeeded lifestyle is…
HH: …when the flat frames as an event, old and new, inexpensive and gallant being combined. My afternoon tea for example simply tastes best from the old Rosenthal-cups from my mother. Important to me are good photographs and paintings on the wall. Many have amazing furniture, but awful art or none at all. 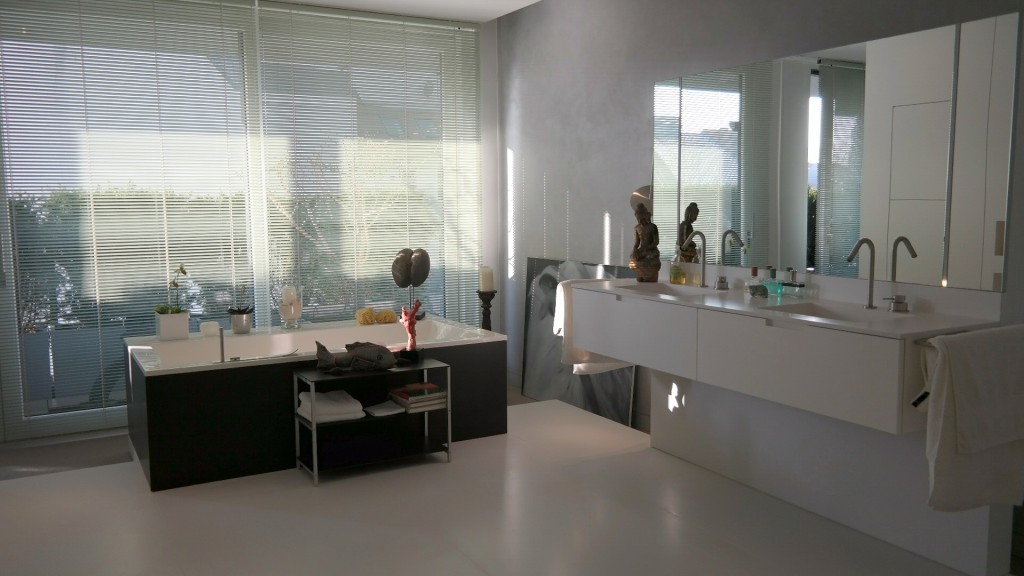 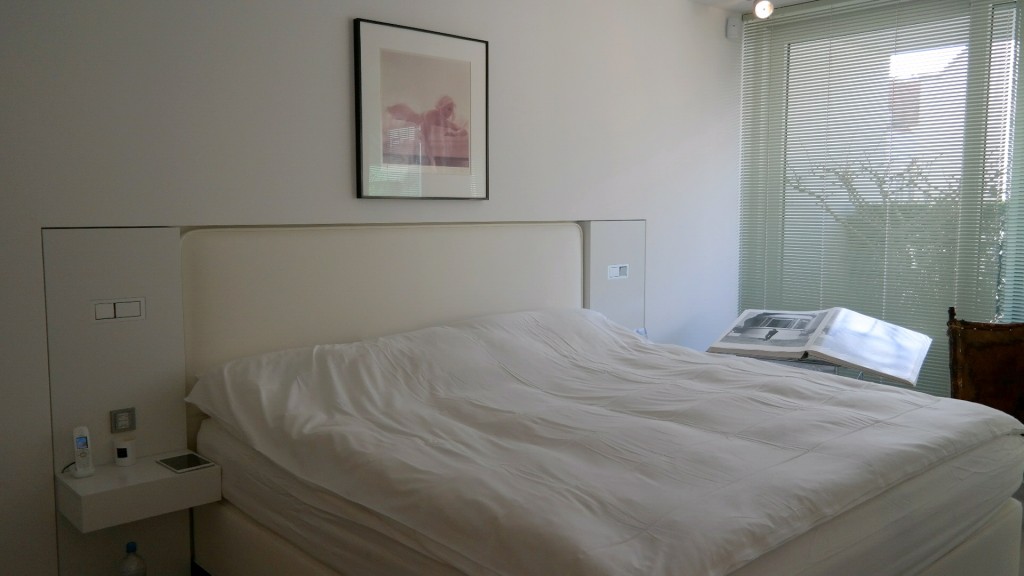 … is adjacent to the bedroom. In the background the limited Helmut Newton book “Sumo”

MS: From your point of view, what are furnishing-sins?
HH: TV’s. They are black holes which get bigger and bigger and start dominating rooms. I hang a picture in front of every TV-screen, which, if needed, moves to the side when pressing a button. Often flats are lumbered up. Furnishing should be easy with cozy snuggle-corners. 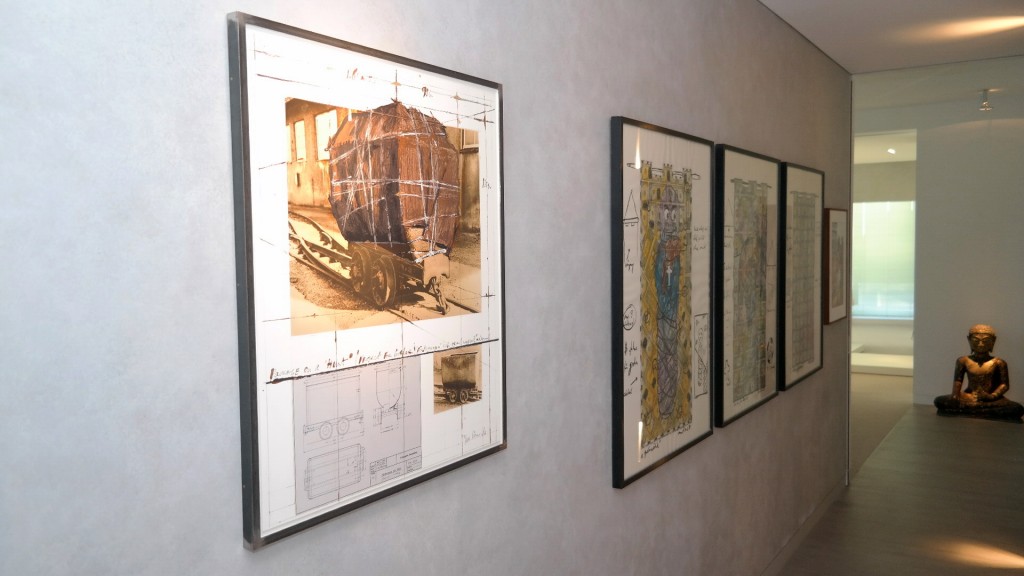 Art by Christo on the corridor … 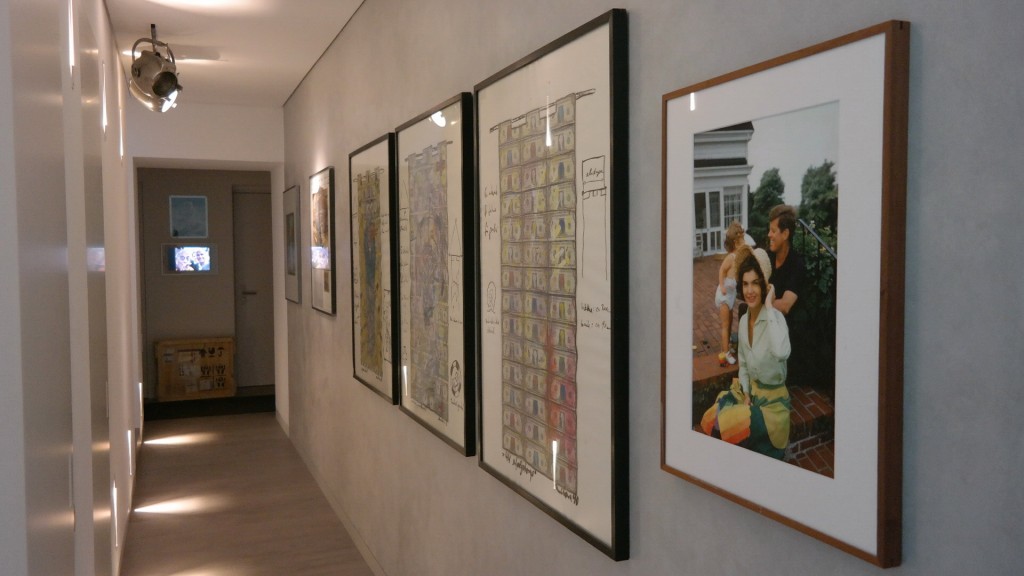 … and so it turns to a gallery

MS: Is there an interior-investment, which you wouldn’t repeat?
HH: As a student I lived, probably like most, with Ikea-furniture. Not one piece lived through the years. Since all these years probably around 15.000 DM came about, which I should have invested in art or a good furniture piece. I can only advice against buying mass merchandise. Vintage-furniture and good photo-art however increase in value. By the way, the best deals can be made at online-auctions. BvH 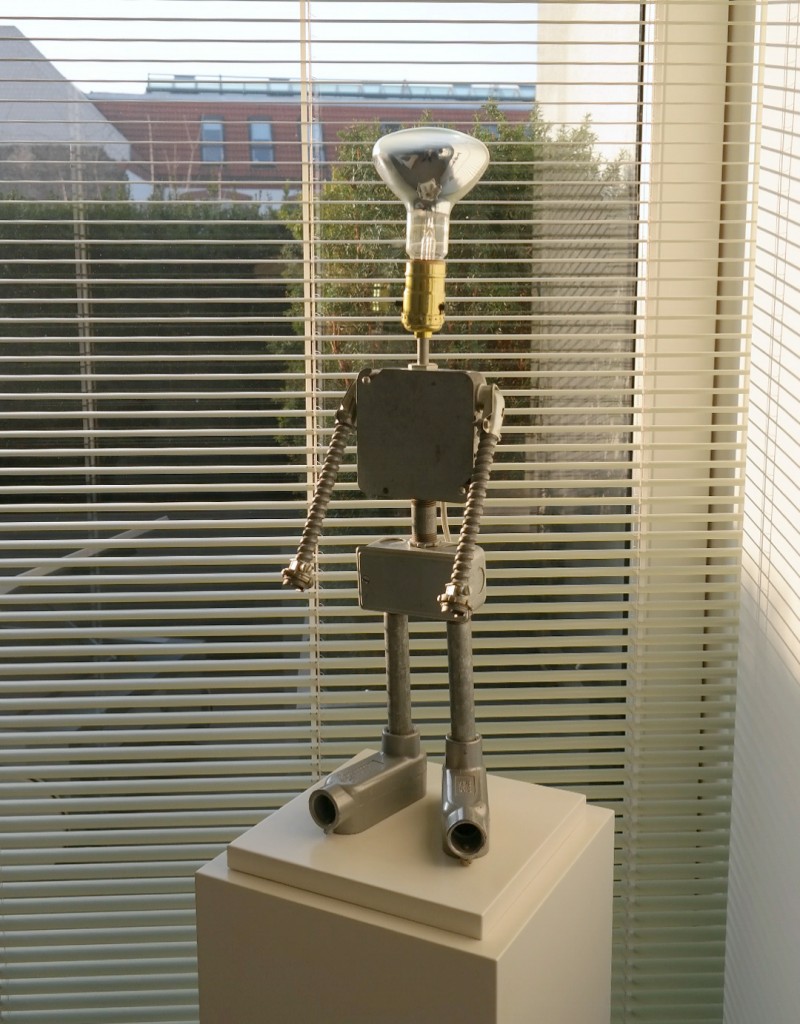 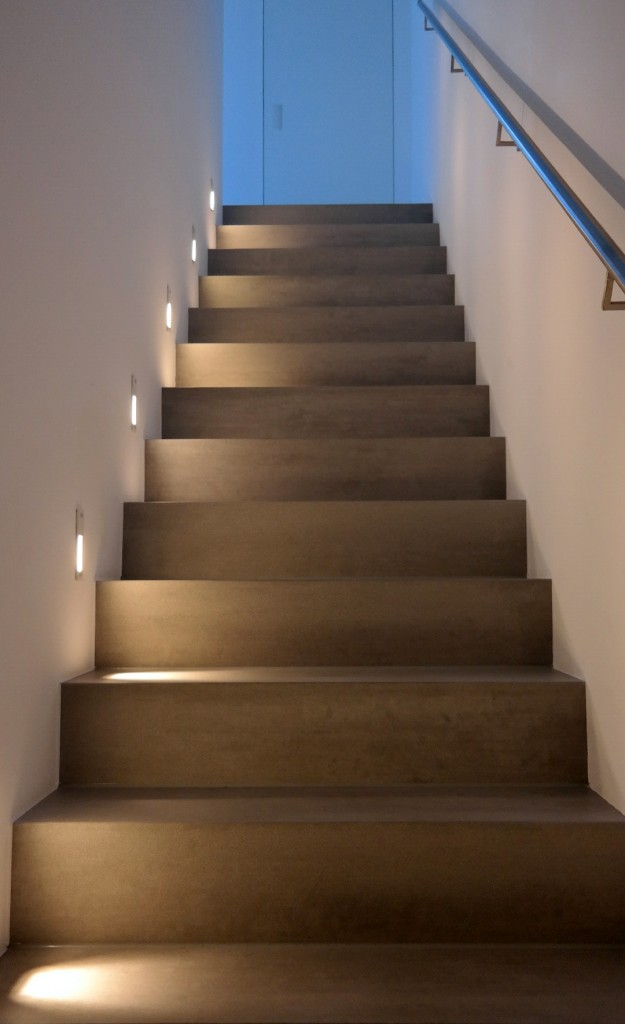 The staircase leads to the upper floor. Again the functional architecture convinced 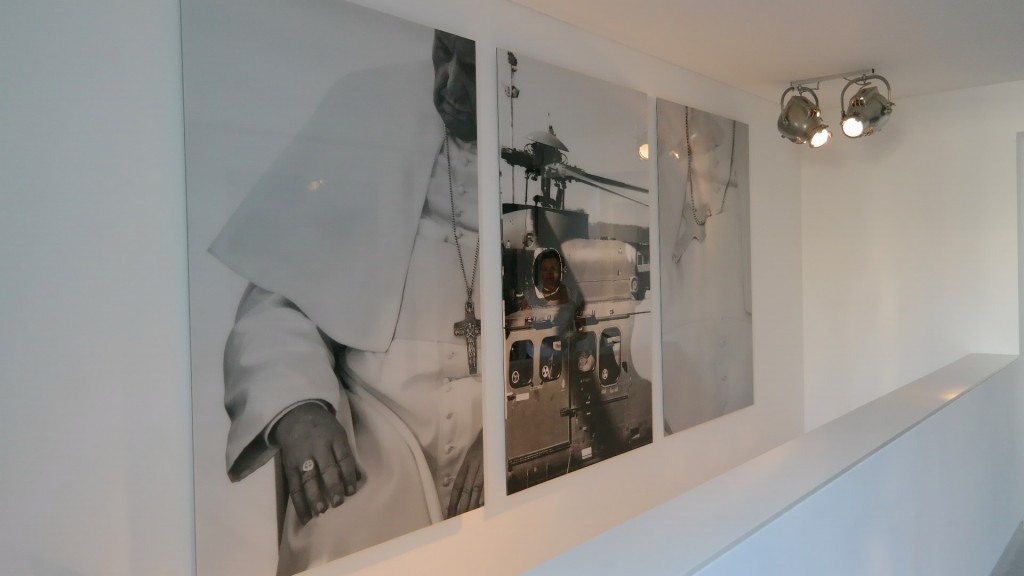 In the gallery, the photographic work “Pope” … 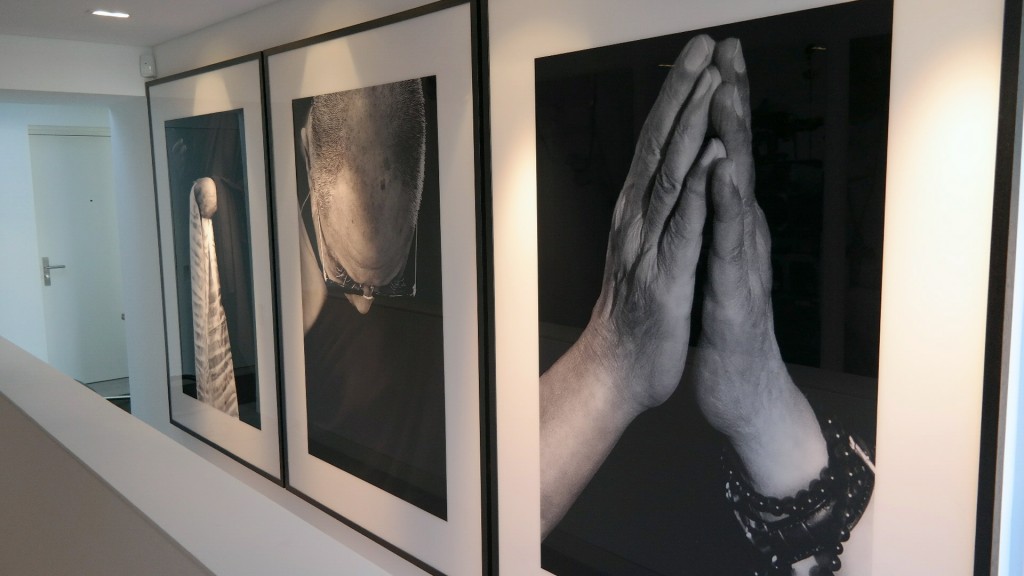 … and “Dalai Lama”, both by Tom Lemke – created in collaboration with Hubertus Hoffmann – entitled “Champions and The Art of Tolerance” 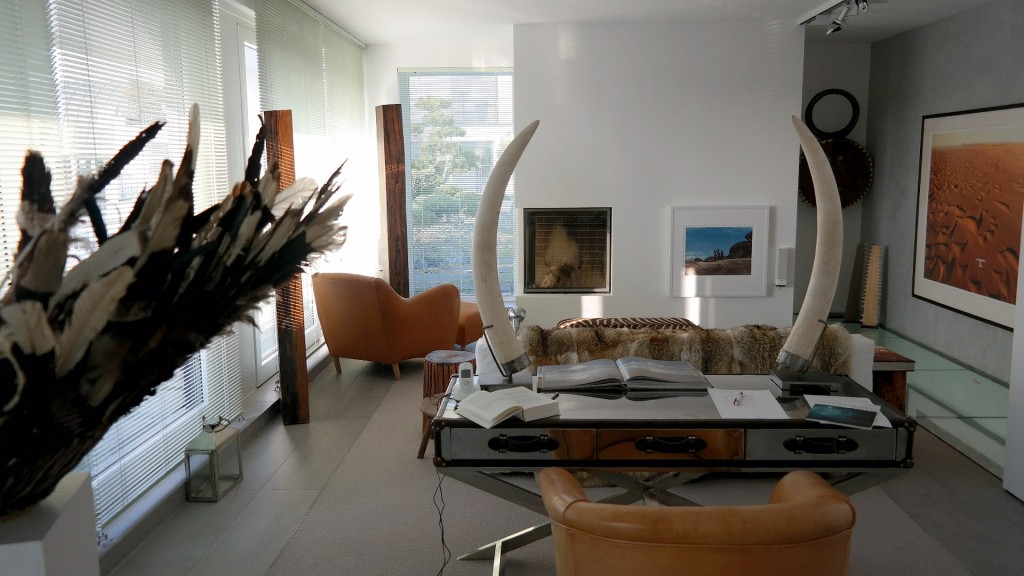 On the upper floor there is the guest area

A great mix of art and souvenirs 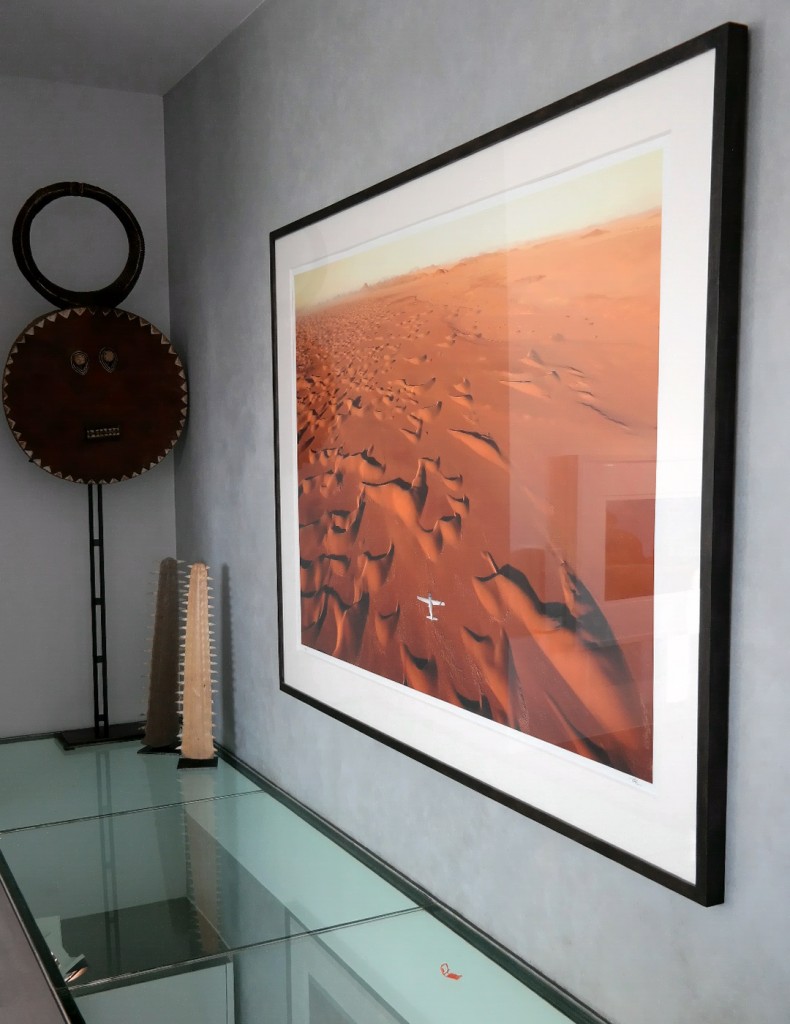 African Art and a photographic work by Michael Poliza 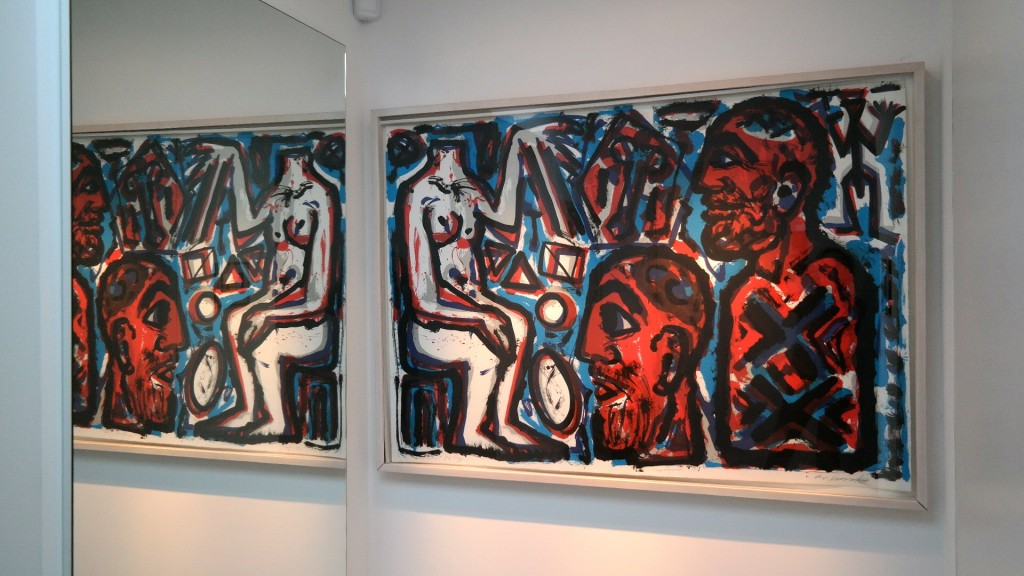 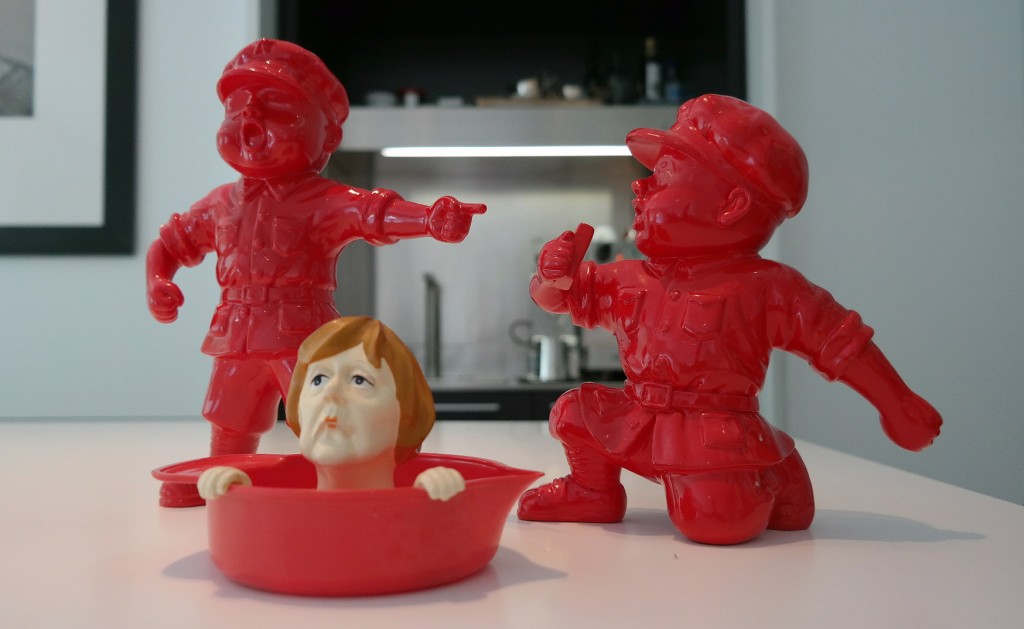 Humor may not be missing in the interior: The figures are flea market finds from Hong Kong. Hubertus bought “Angie” in Berlin. Love it!