Who: Michael Michalsky, Designer
Where: Berlin 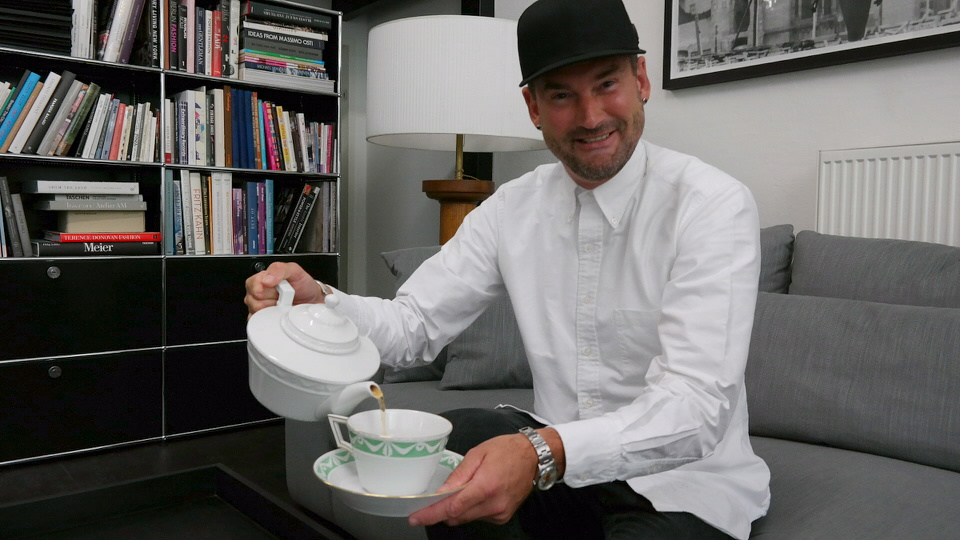 Teatime at Michael Michalsky’s office: MM pours the tea and enjoys it black, without milk and sugar

We know each other for years and have the same northern German roots: Fashion designer Michael Michalsky was raised near Bad Oldesloe, I was only 35 km away in Lübeck. And we both love fashion and tea. Since 24 years Michalsky is active as fashion designer. He designs sets of cutlery and tableware for the German brand WMF, his perfume is a bestseller. After he conferred the fashion circus with a vociferous refusal last year, he is nowadays more present than ever. The chosen Berliner started his comeback in 2015 with the haute couture series “Atelier Michalsky”. And today he is even a TV-star. 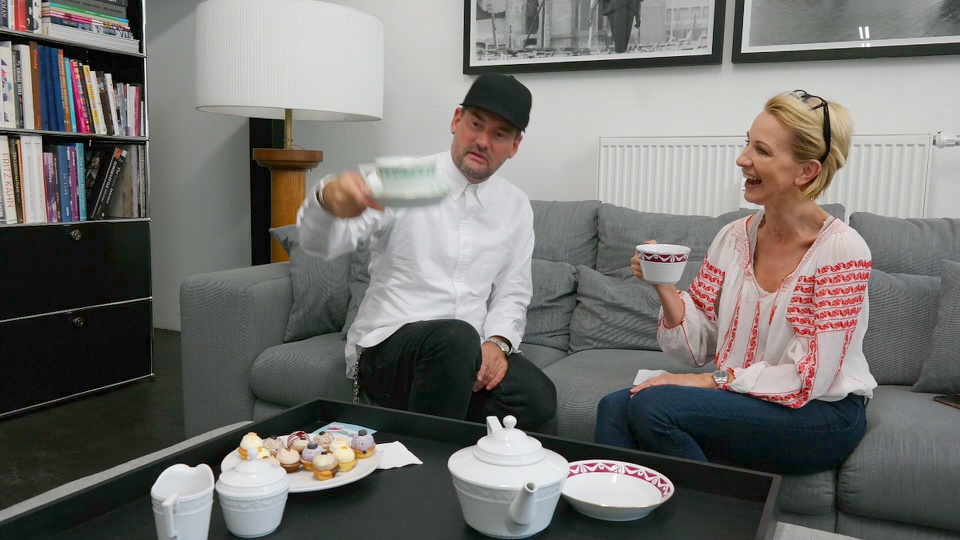 MyStylery: Michi, I cooked Earl Grey for us, I hope you like it!
Michael Michalsky (laughs): How great that you brought some tea! I never experienced that at an interview before. And those cups. I would love to have them as well! I love English tea. When I’m in London I always go to Fortnum & Mason and buy Earl Grey classics.
MS: Have you always liked to drink tea or did you become a tea drinker in England?
MM: I was always anglophile. I lived six years in London and this characterized me. Every morning I drink a big bowl of tea as more goes inside than in a normal cup. Currently I also like to drink the Earl Grey Blue from Mariage de Frères. 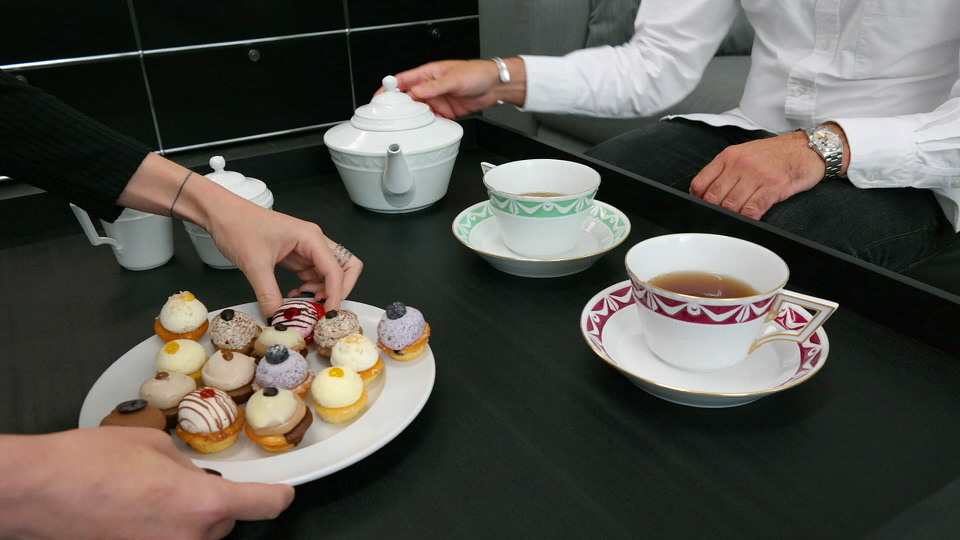 Delicious cupcakes from Berlin brand “Just a Bite”: So yummy!

MS: Do you also drink green tea?
MM: No, always and only black tea.
MS: Also in the evening? But can you sleep afterwards?
MM: After four o’clock I’m not drinking tea and coffee anymore. Otherwise I could stay awake until eight in the morning. But those days are long gone. There’s nothing more beautiful than an English-celebrated teatime with scones, clotted cream, sandwiches with salmon and cucumber, everything nicely decorated onto étagères. I love this. 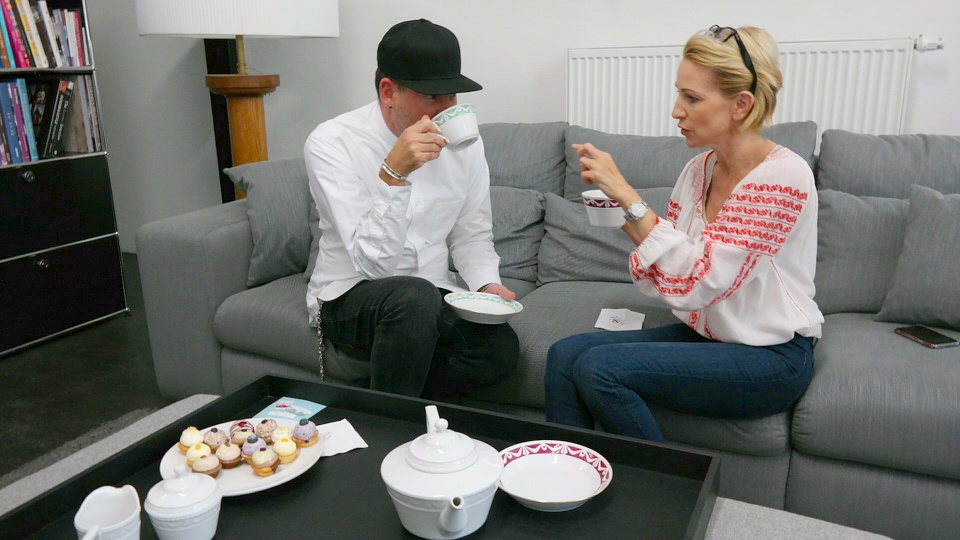 Since the TV show GNTM (“Germanys next topmodel”) he often gets recognized on the street and asked for selfies. “But rather in cities such as Hamburg or Munich. The Berliner are too cool.”

MS: What else than tea connects you to England?
MM: As student I often drove to England to officially work on my English. My main motivation was of course the fashion, which emerged there like the music did. Everything I liked in the 80ies came from London. I saved money to buy myself clothes that you couldn’t find in Germany. Nowadays you’re getting the same things everywhere anyways.
MS: Are you an online-shopper?
MM: Absolutely! Just yesterday I bought myself a plaid shirt and a black hat. I love Mr. Porter. That’s the greatest online shop for men. I mean isn’t it wonderfully comfortable? Everything is getting delivered, I can try it on at home, preferably clothes from Maison Margiela, Prada, Haider Ackermann, Comme des Garcons and also of course Michalsky. 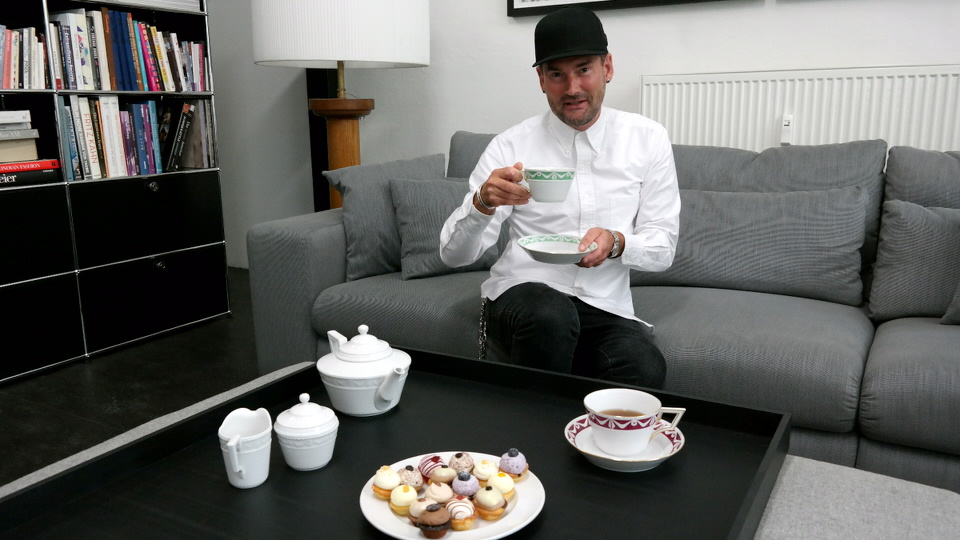 “London is a great city. I had a very exciting time there. I’m in London one to two times a year. There I would like to travel more often.”

MS: One year ago you launched the haute couture series Atelier Michalsky.
MM: And this was accepted very positive. This is the beacon of my Michalsky-brand environment, which expresses my love to fashion. Next to it there are other areas like carpets, perfumes, furniture, the cooperation with WMF. I’m now working freer of constraints, what I really like. My clients accept that they have to wait for a garment. The exclusiveness, longevity, quality of materials and individuality are more important to them than a quick availability.
MS: Why runs the fashion industry so hard?
MM: Fashion has become very fast paced. I think it’s great that fashion has democratized. If I would ask the people on the street whether fashion is important to them, safely nine out of ten would say yes. Only 20 years ago the people on the street looked very different. Then fashion had much more to do with exclusivity. Today fashion from the rod doesn’t cost much, there’s a permanently sale, people throw things away just because they don’t like them anymore. This is completely alien to me. Earlier I had jobs so that I could afford to launch a little bit. 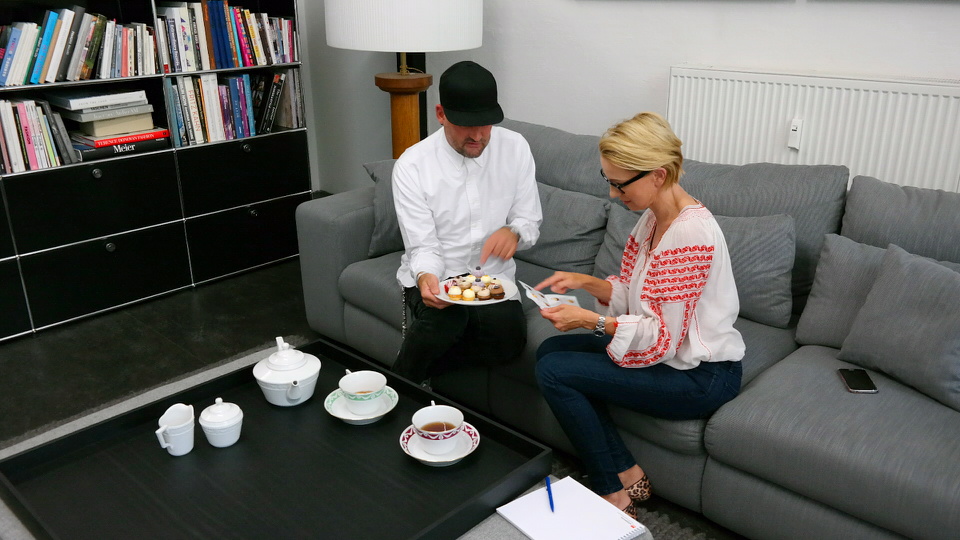 We try the delicious cupcakes: “When I’m in a foreign country, I accommodate myself and in the USA it’s clear that you drink more coffee and less tea.”

MS: Since 2015 you’re also active in television as juror of a famous casting show and everybody’s darling.
MM: GNTM came completely unexpected. I didn’t plan to start a television career. Standing six months in front of the cameras, the responsibility to take care of twelve young women who I didn’t know before, that was a completely new experience from which I didn’t even know, whether I would be able to do it.
MS: At least you have pampered yourself in a luxury hotel while you were filming in Los Angeles.
MM: Yes, nearly four months. When I had breakfast in my room, they actually already brought a latte plus a pack of cigarettes. That’s what I call service. (Laughs) By the way I really liked the latte at Chateau Marmont. 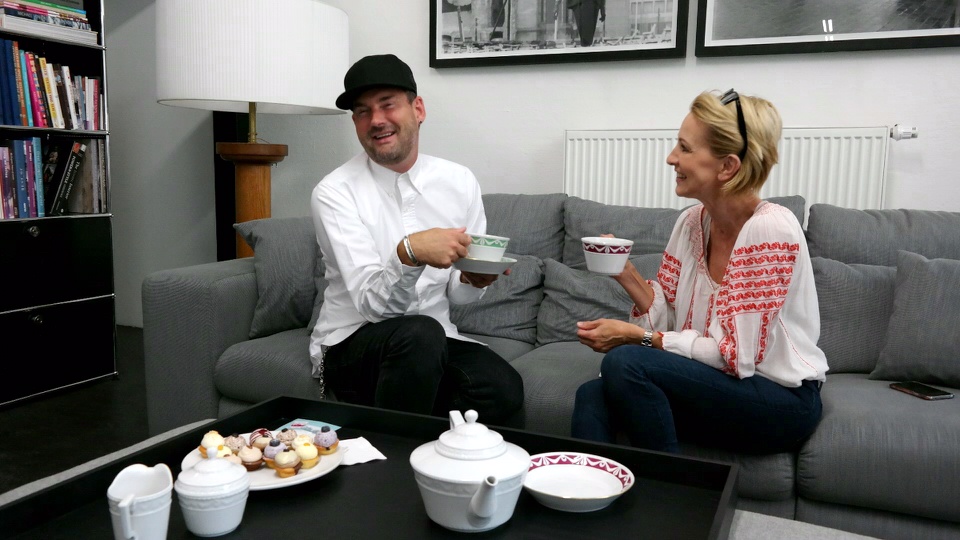 Michael Michalsky is happy: GNTM season with him was the most successful season of the last five years

MS: What was your biggest challenge?
MM: I did not only see myself as juror, but especially as mentor. Authenticity was in this case extremely important to me. I’m a meritocratic human and I believe in Prussian virtues like order, assiduity and punctuality. I know that you have to work for everything. And this is a special, new territory for some girls, a territory they didn’t know before.
MS: Is that a question of generation?
MM: No, it’s a question of education. The children of my friends are well educated, as they got conveyed with the right values. But they’re still free and creative in their acting. But you’re not a philistine, just because you appear on time and are prepared for a date. 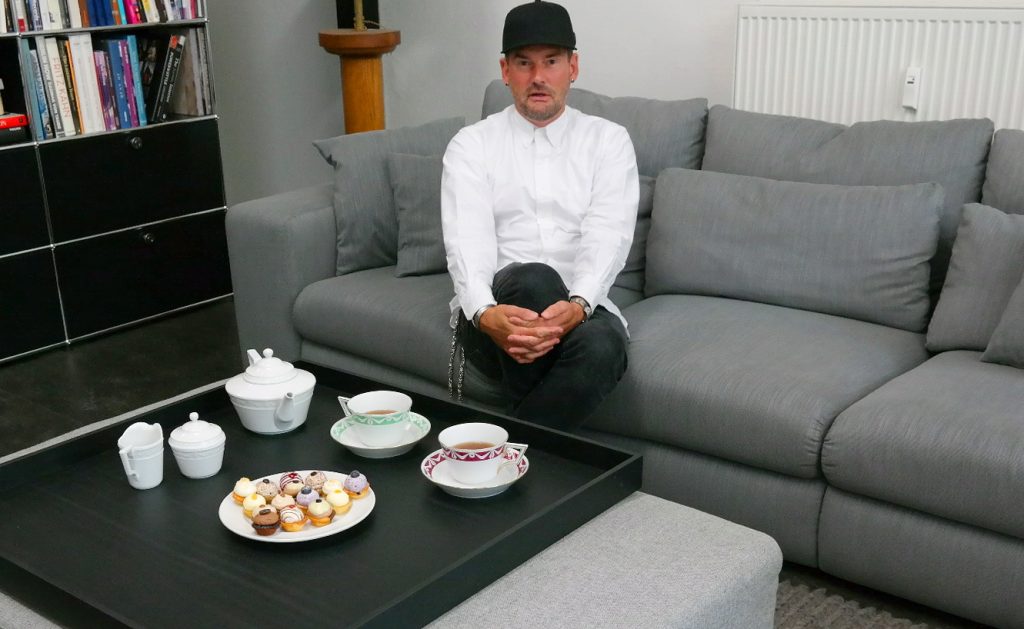 “My wish for the future? To stay healthy as long as possible.”

MS: Only some of the previous winners were able to establish themselves in the professional modeling business. What are the girls taking from this TV format?
MM: It depends on the volition of every single girl. At GNTM they’re doing kind of a training, in which they got to know the fundamental know-how. Supermodels know that the job is really hard work. One has to fight for the jobs and one has to burn for the thing, even if it doesn’t work out at the first onset. I’m speaking from personal experience. Seize every given opportunity! Today many young people lack the bite. They get a rejection and then they don’t know what to do.
MS: What would you do different today by looking at your experiences?
MM: Education is the most important thing and one should take everything one can get. I regret that as a student I haven’t accepted further education courses to learn French or Spanish. I was surprised by some candidates that we casted in Berlin. 16 years old girls who still went to school. They would have interrupted or even quit school just to take part on the show. With the consent of their parents. My parents would have never allowed this.  BvH

How about a cup of tea, your Highness?
Who: Princess Gloria von Thurn und Taxis Where: Berlin, Germany…