Who: Daniel Bruehl, Actor
Where: Berlin 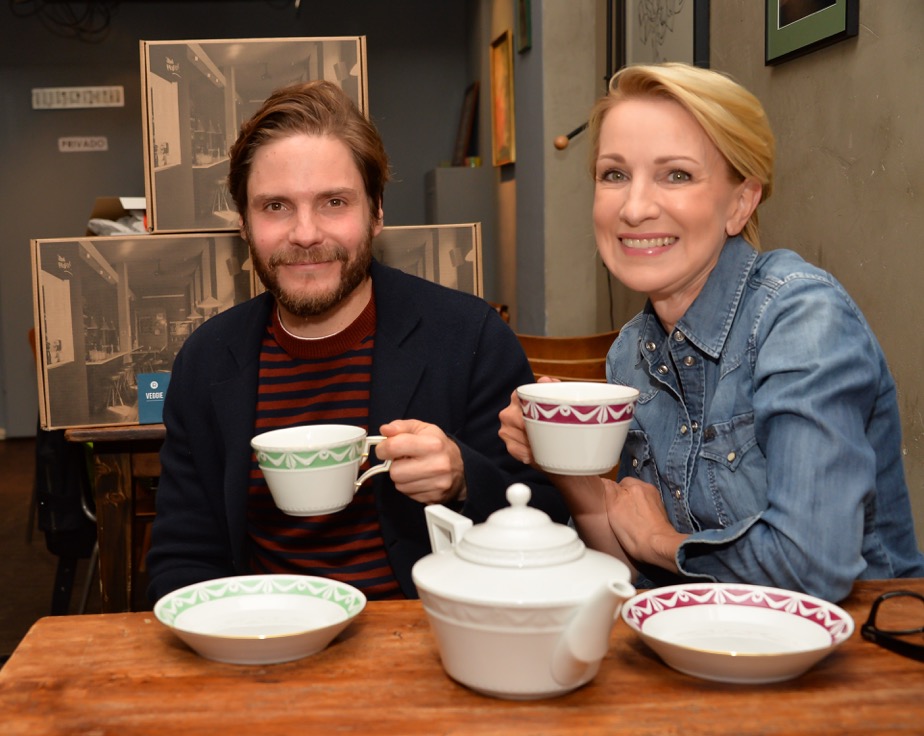 Daniel Bruehl and I sitting in his Tapas-Bar Raval in Berlin. We drink tea from hand-painted cups by KPM

The image of a nice, young man, the dream of every mother-in-law is no longer associated with Daniel Bruehl. The actor, who had his first big breakthrough with the film Good Bye, Lenin!, has, with international productions like Inglourious Basterds, Rush, The First Avenger and Colonia Dignidad, arrived in Hollywood. I meet Daniel César Martín Bruehl González – as he is called by his full name – in his tapas bar Raval in Berlin-Kreuzberg. The man with the Spanish roots – his mother is Spanish, the father German – is currently not only the most asked for international German actor. Since 2011, Daniel Bruehl is also restaurateur. The multilingual all-rounder really wants to talk about his new tapas boxes and looks surprised when I unpack my teacups and pour in the tea.

MyStylery: Mr Bruehl, I hope you like tea?
Daniel Bruehl: Of course. What is the sort?
MS: That’s Morning-dew tea, an herbal blend with green Sencha, sunflowers, cornflowers and rose petals.
DB: Ah yes, the I order this one when I’m traveling with Deutsche Bahn. I like drinking Tea.
MS: You grew up in Spain. Spain is more a coffee nation.
DB: True. But my mother is a big tea drinker. That’s why I mainly grew up with Earl Grey and Assam. Now I just discovered Kusmi-tea for myself, they really have great mixes, for example the Detox Tea.

MS: Most of my interviewees don’t get out of bed without their caffeine doses in the morning.
DB (lauhgs): That’s right. But in the afternoon there’s tea in the cup. When I film in England, I drink almost exclusively tea, preferably “white”, so with milk, as the most drink it there. I watch my English friends taking out the bag instinctively at the right time. They seem to have that in their DNA. When I let the tea steep myself, I always put a stopwatch next to it, to not miss the right moment. By the way, you brought beautiful mugs.
MS: They’re from KPM. Each of these cups is unique, where the artist has immortalized himself with his character.
DB: Ah wow! Large cups also affect the taste. When one drinks our traditional Spanish gin and tonic from balloon glasses, it develops its flavor much better and tastes different than a highball glass. 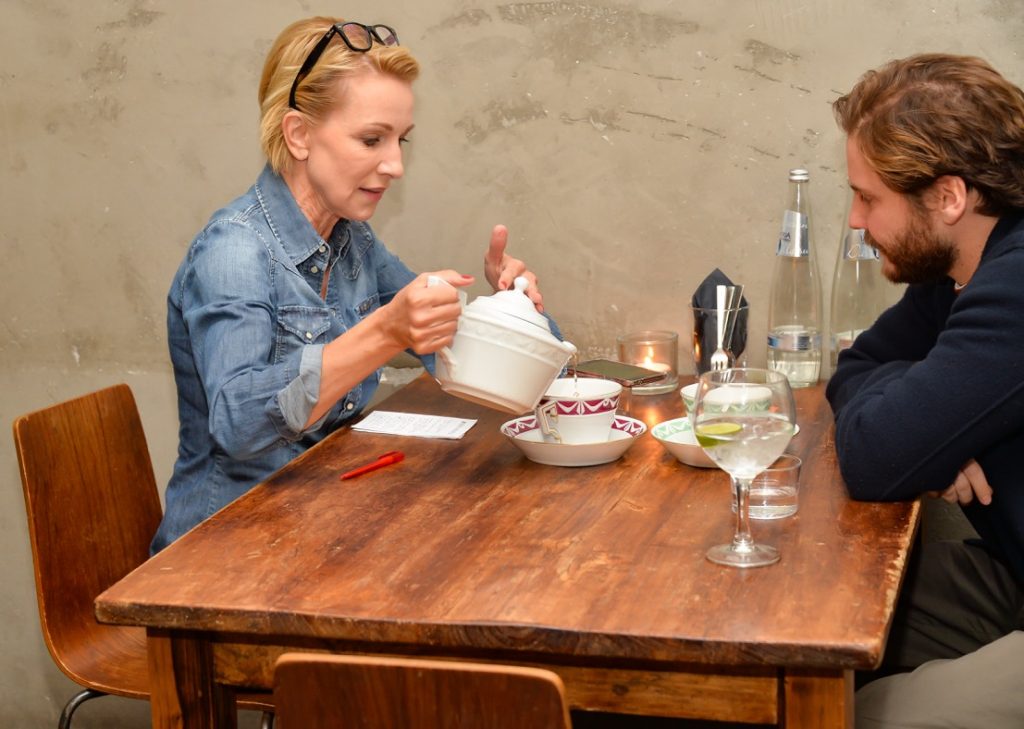 Daniel Bruehl: “Basically, I’m a positive person, but there are things that go against the grain. I might be short-tempered and sometimes grumpy then.”

MS: Your Gin comes from Spain? Doesn’t Gin originally have French or English roots?
DB: The British have brought the gin to Spain and the Spanish love gin and tonic. On Menorca they make quite excellent Gin Mare with flavors of the Mediterranean, such as thyme and rosemary.
MS: How did you become a restaurateur? Don’t you get enough to eat at home?
DB (laughs): I was homesick for Spain and therefore had quite selfish motives. Also, I missed my mother’s dishes, when I went from Cologne to Berlin when I was 20. These are dishes that only she can cook, although she tries to tell me what to do per phone.

MS: Some of your fellow actors went, after the absence of new film offers, in the catering industry. This is evidently not your case.
DB: I do this out of genuine passion. To have brought a piece of Spain to Germany, makes me totally happy. I was from the beginning not naive enough to believe that the catering could be a second pillar.
MS: You are expanding. Soon there will be a tapas branch in Berlin-Prenzlauer Berg. Would you see yourself as a bartender who taps the beer at the bar in the future?
DB (laughs): No, I leave that to the pros. With me in the kitchen or at the bar, we would probably go bankrupt.

MS: Recently, you can order your tapas & co online. Pushing a button and the Spanish cuisine is on the German table.
DB: When I come back from Barcelona, half the suitcase is full of products that I love to eat in Spain and which do not exist here that remind me of my childhood and youth, for example Espinaler, a spicy sauce which is served with cold mussels, paprika over it, ready. This is the classic setting for watching football matches. My buddies love it.
MS: Are you a football fan? Which club do you like best?
DB: Clearly Barcelona. You are from the north, right?
MS: Yes, born in Lübeck.
DB: I like the northern German accent so much, which is much nicer than the one in Cologne. Many of my friends are from the Hamburg area. 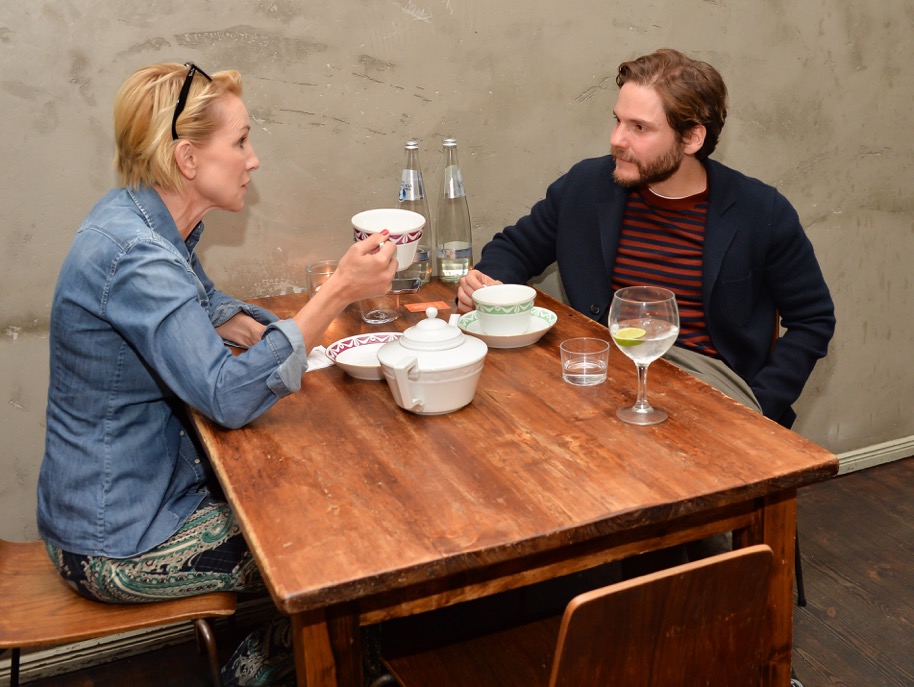 “The cliché about Spain annoys me: Mallorca, paella, bullfighting. Spain is so much more”, says Daniel Bruehl

MS: Thanks for the compliment! Are you an online shopper?
DB: I’m getting one more and more. To order food is convenient. On Ebay I sometimes discover the weirdest things. Nevertheless, I like to support local, small stores in my neighborhood.
MS: And your favorite meal?
DB: With Pimientos de Padrón or Boquerones I cannot say no. Unbeatable is the ham of Iberian pig, the whole seared á la minute. Simply delicious!
MS: Do you cook yourself?
DB: Yes, although I notice again and again, how limited I am with my opportunities. There is still much room for improvement. When I cook, then preferably black rice.

MS: You have filmed a lot abroad recently. Would Hollywood also be an option for you privately?
DB: I’ve just been to Los Angeles for three months and noticed that I myself am already very European. I’m missing there certain traditions, the history and variety that I can experience in Europe in the smallest space. I grew up between two cultures myself. And I love Italy and France very much.
MS: As a producer, you are already active, how about directing?
DB: If there is a story that I really want to tell, why not? I am a very restless type. As a producer, I can already live the creative me now. That’s what I sometimes miss as an actor.

MS: You will be a parent soon. What do you wish for your child?
DB: I am very privileged that I grew up in such a great family. If I can pass on what has been exemplified to me, I’m happy.  BvH