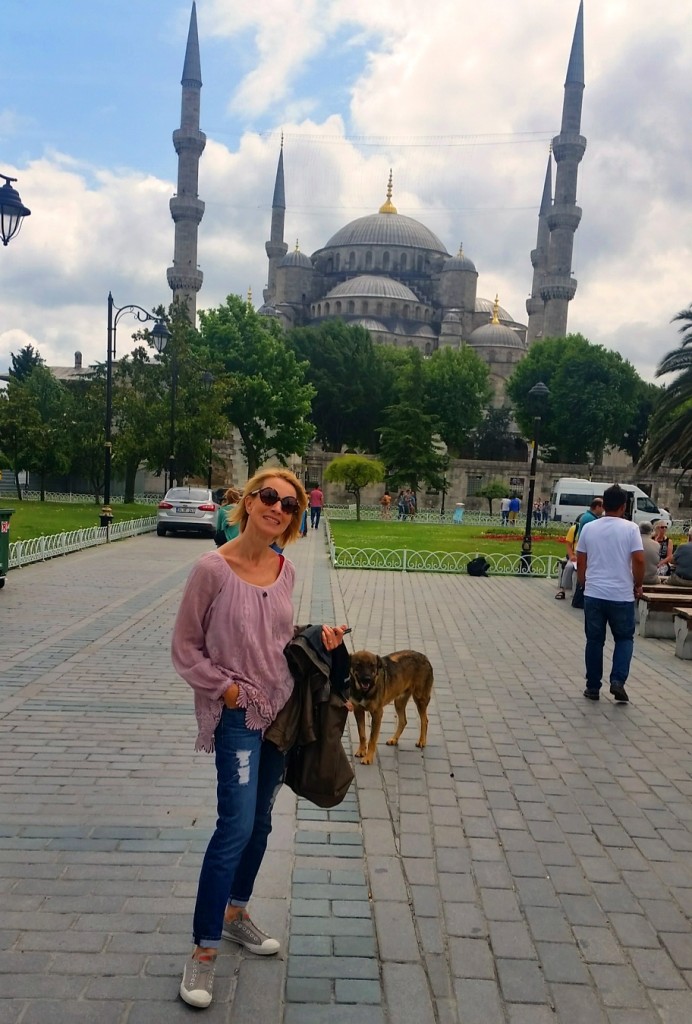 The Blue Mosque, a dog and me: Hello Istanbul

The pulsing life, the movement, Istanbul fascinated me from the first moments. First of all there is the incredible location of the 14 million-inhabitant metropolis on two continents that impresses. 3000 years of history left their mark on the Bosphorus town. There is so much to discover- but where to go first? Of course there is the Hagia Sophia and the Blue Mosque that come to my mind. But Istanbul has a lot more to offer. 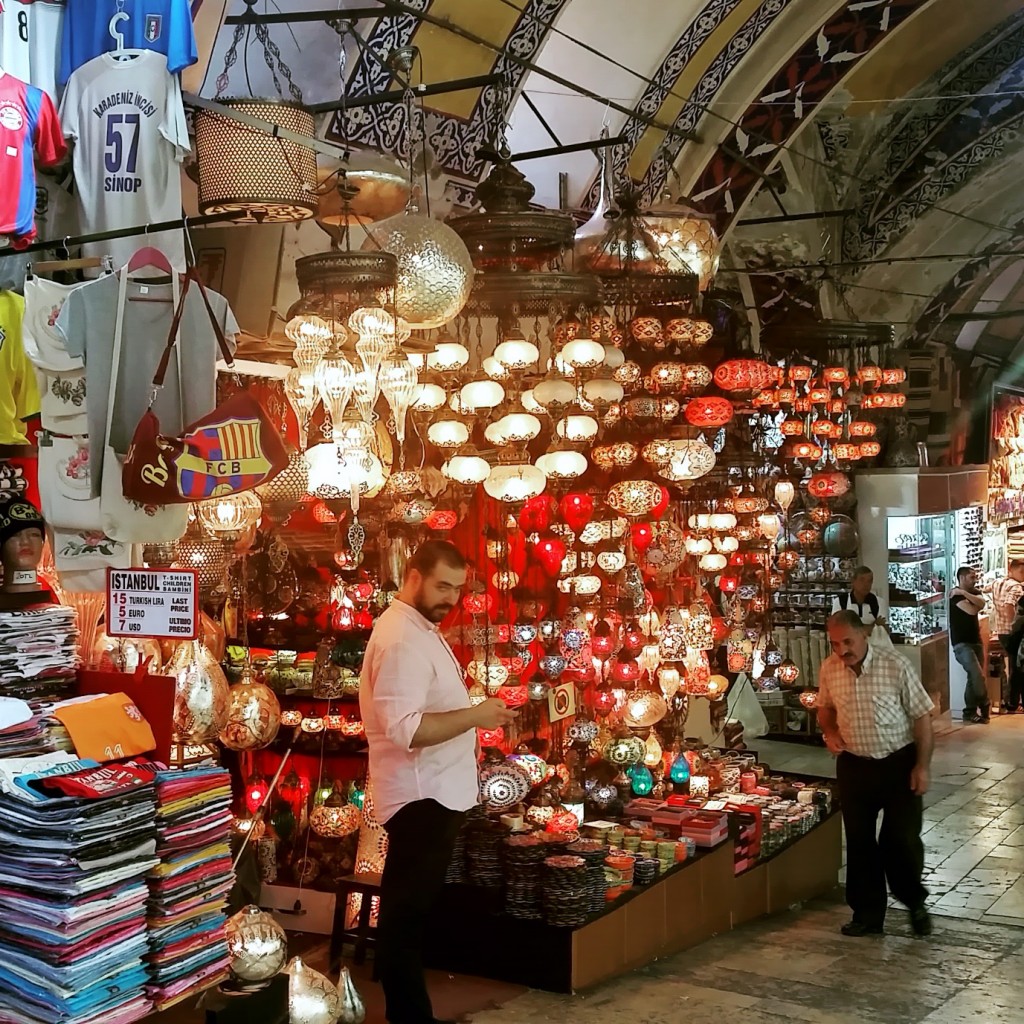 A boat tour along the Istanbul strait is for the daughter of a ship captain like me a clear MUST, to Asia and back to the Golden Horn please. For shopping victims like me it is obligatory to stroll through the oriental market ‘Grand Bazaar’. You absolutely need to schedule some time for this, as there are more than 4.000 shops on 30.000 square miles to visit. I am curious how the sultans in the Topkapi Palace resided and want to get enchanted by the grandest mosque the Sülemaniye. Conveniently those monuments of the old town on the historic peninsula lay in the district of Fatih, so it’s easy to combine these legs of my tour. 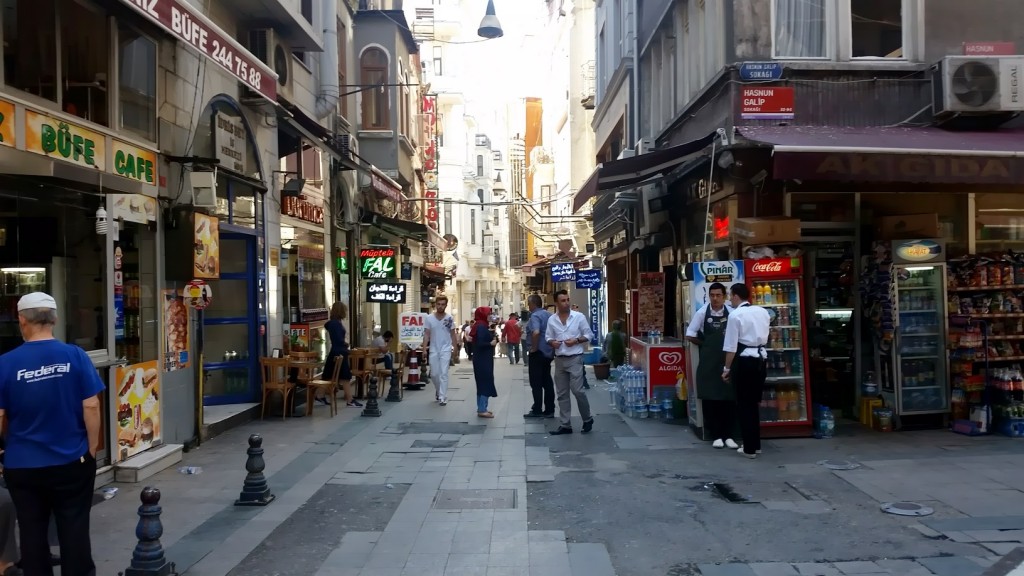 Streetlife in the Beyoğlu district, the hottest hood in Istanbul

The facing district Beyoğlu is the hottest borough of the moment, where the member club Soho House just opened its newest hotel (see “Soho House Istanbul: An oriental fairy tale palace“ on MyStylery). Here in Pera – that’s how the old European borough originally was called – a new art scene established with the ‘Istanbul Modern’ and ‘Pera- Museum’. There are many small cafes, galleries and shops, and not to forget the famous shopping street on which the historic tram drives. 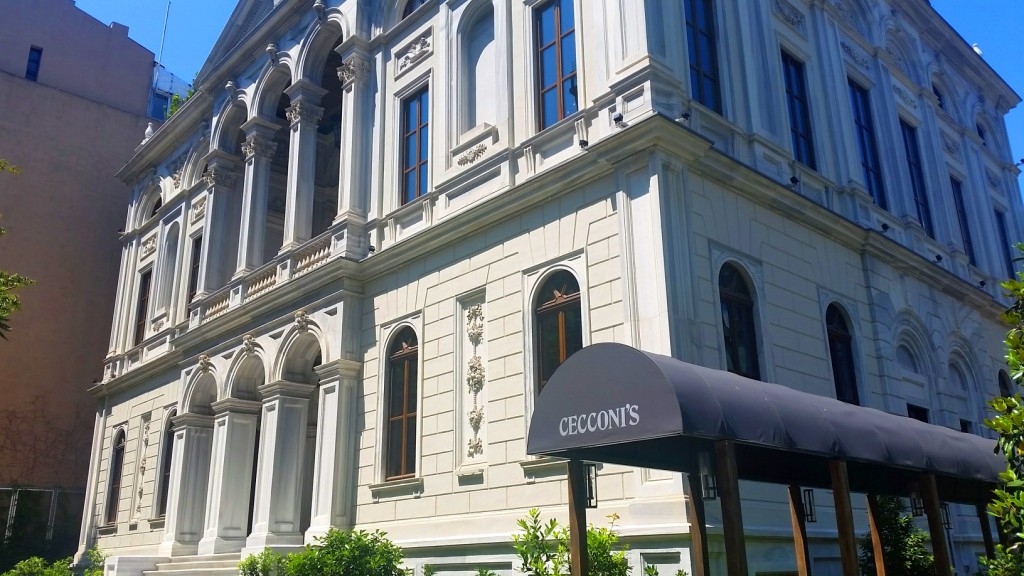 You can find the most delicious breakfast with croissants that taste like in France at ‘Gram’. Everything is freshly prepared and the menu offers changing dishes. Chef and successful cookbook author Didem Şenol conjures fantastic Turkish- European crossover dishes from regional ingredients for instance warm goats cheese on eggplant and lentils – a truly culinary delight! I would like to highly recommend her branch at the Karaköy- District the ‘Lokanta Maya’ at this point. Culinary art at a high standard in a beautiful ambience. 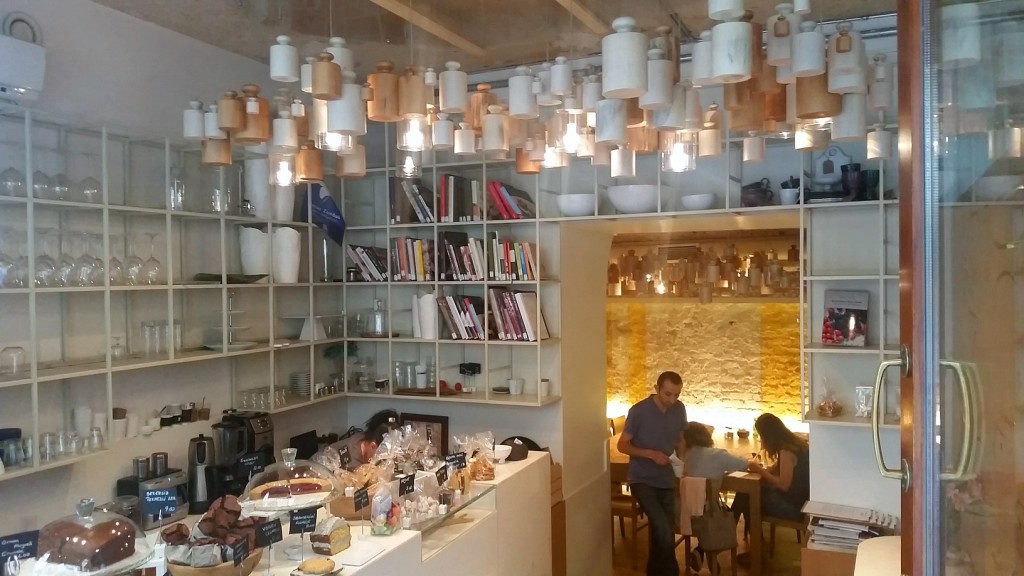 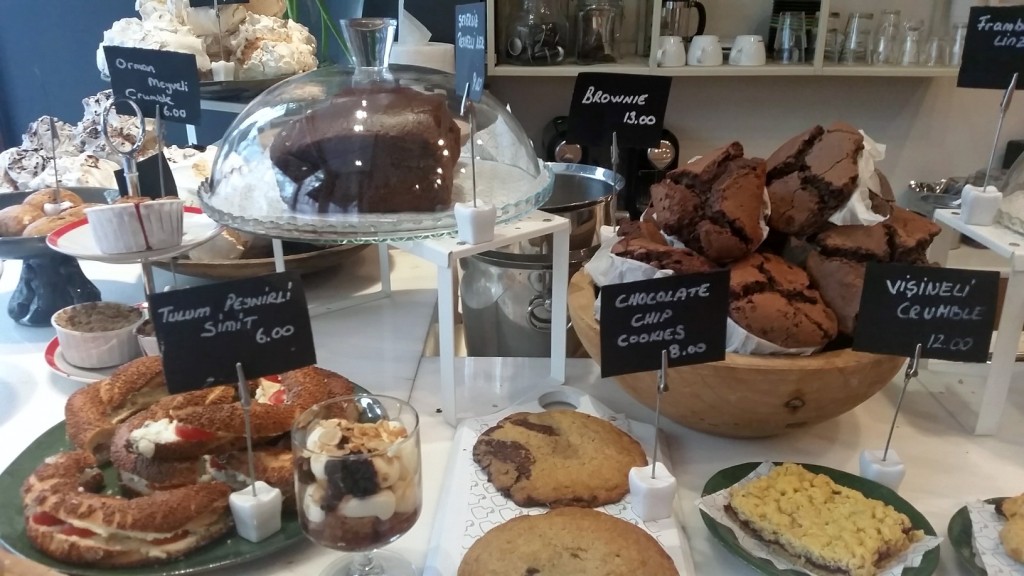 Help, I can’t decide with all the delicacies at the ‘Gram’!

The right address for Turkish Mocha or a Caffe Latte is the ‘Noir Pit’. Next to a tremendous selection of coffee specialties they also offer a variety of small snacks. 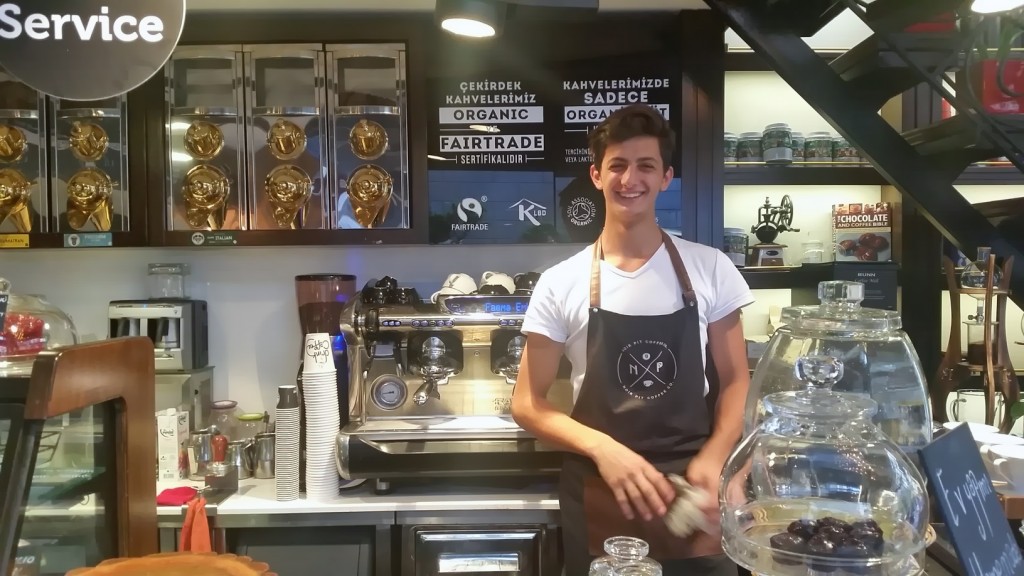 Have a coffee at the ‘Noir Pit’, Mesrutiyet Caddesi, 109a in Pera, www.noirpit.com

I love the small Cukurma-district, the antiques quarter offside the hectic ‘Istiklal Caddesi’ in Beyoğlu. It’s a pleasure strolling through the little alleys, past welcoming cafes and partially fallow buildings and then again the already refurbished objects in between like the small Boutique-Hotel ‘Corinne’ with a magnificent restaurant, and art gallery offer a nice surprise. 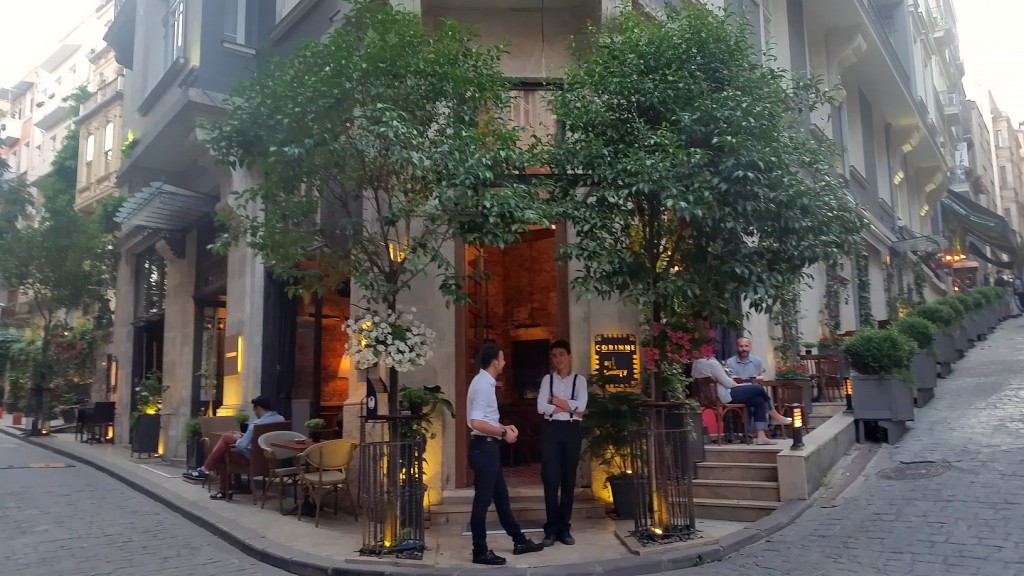 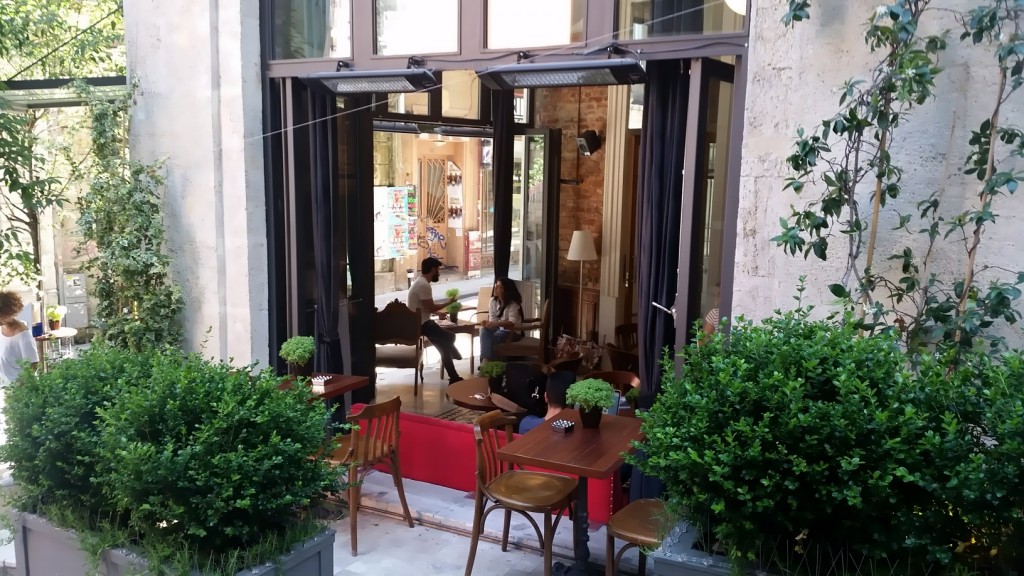 Here you can also sit outside nicely: Boutique-Hotel ‚Corinne‘

Moving on past the Galata-tower into the direction of Karakoy, the quarter that just awakes from it’s deep slumber. Directly next to the jetties for big cruise ship emerges an interesting scene with chic restaurants for the hip audience. I initially wander trough ‘Fransiz Sokağı‘- the French street of the former Algerian quarter, which was renovated with the help of the French cultural institute, past little shops and cafes. 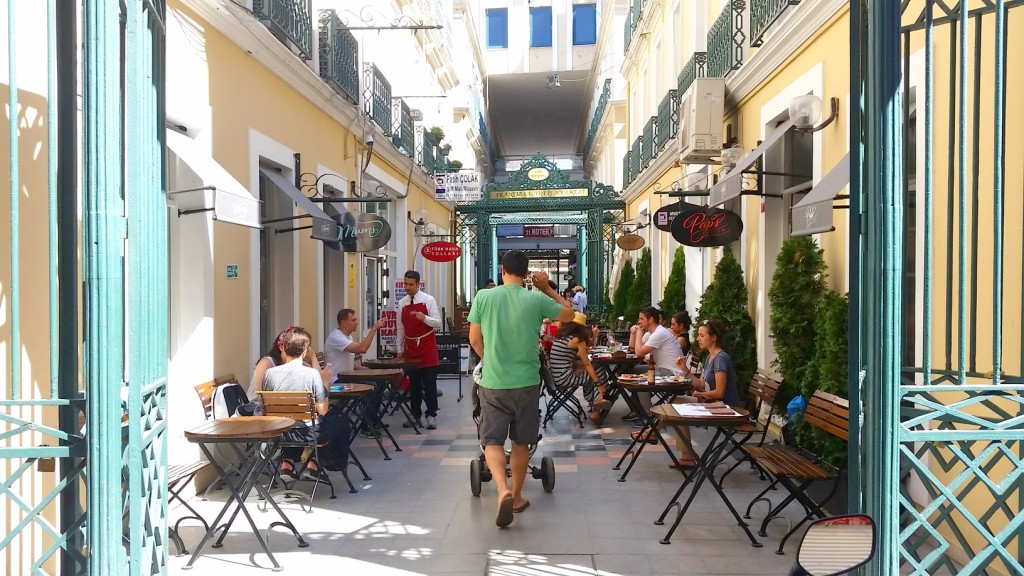 Popular to tourists and locals: ‚Fransiz Sokağı‘, the French street 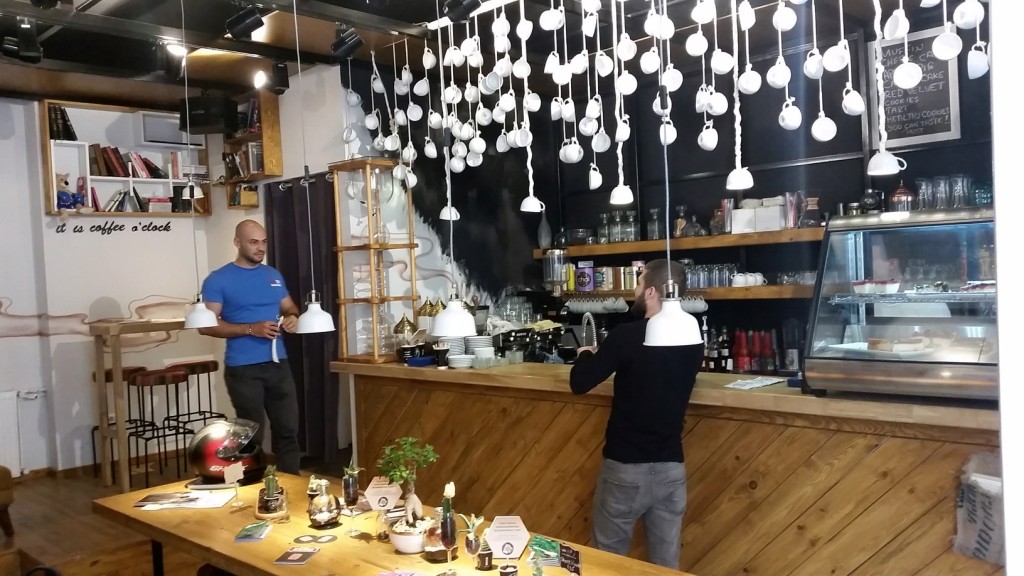 Welcoming: Coffeeshop at the ‚Fransiz Sokağı‘ 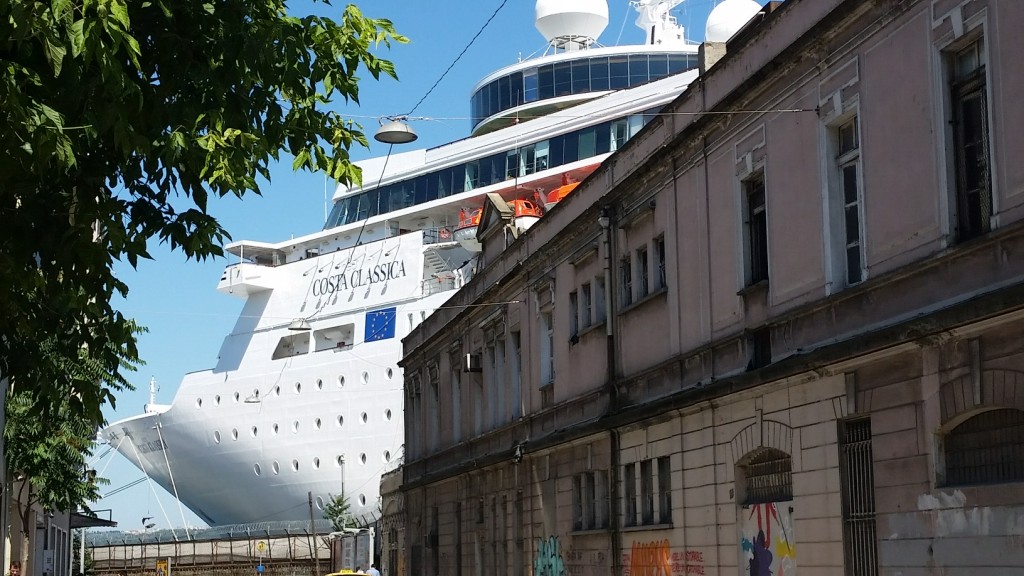 Giant boat infront of a small house: Jetty in the Karakoy district

I decide to have a relaxing lunch at the near, very popular ‘Karakoy Lokantasi’ which was recently furnished by the Turkish design company ‘Autoban’ with very cool tiles in turquoise. I order Turkish starters, so-called ‘Meze’: Hummus with flatbread, eggplant puree, shrimps marinated in coriander and garlic-yoghurt-cream. One should also taste the bulgur balls and the obligatory stuffed vine leaves. The only thing I could have forgone was the dowdy, bad service. But even that can damp my excitement for Istanbul in no way.  BvH 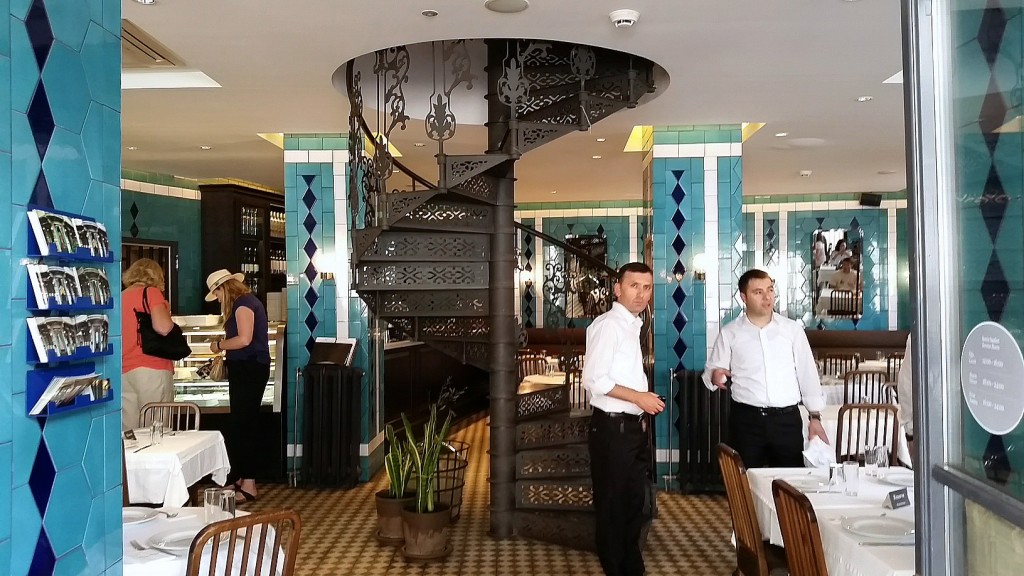 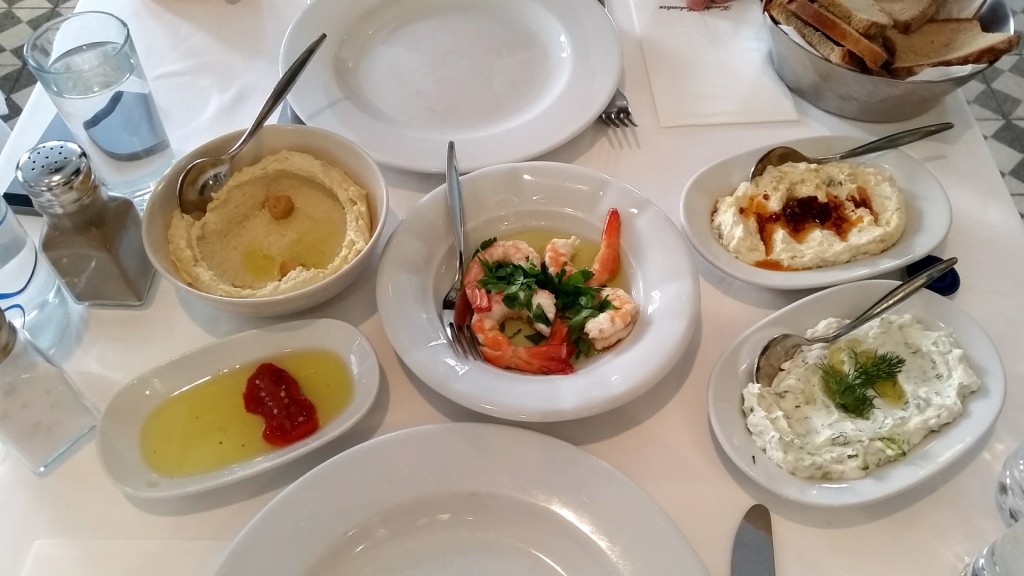 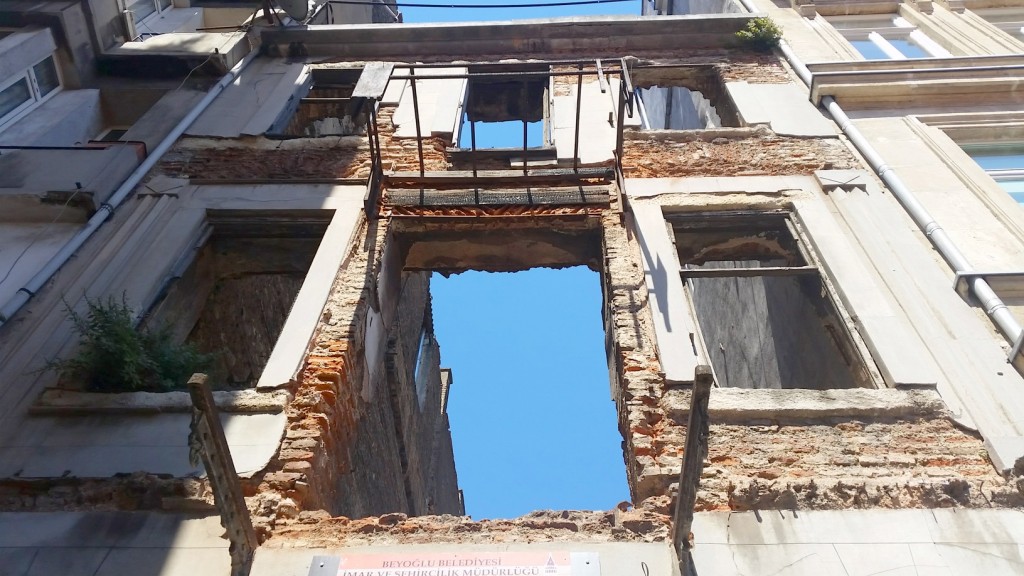 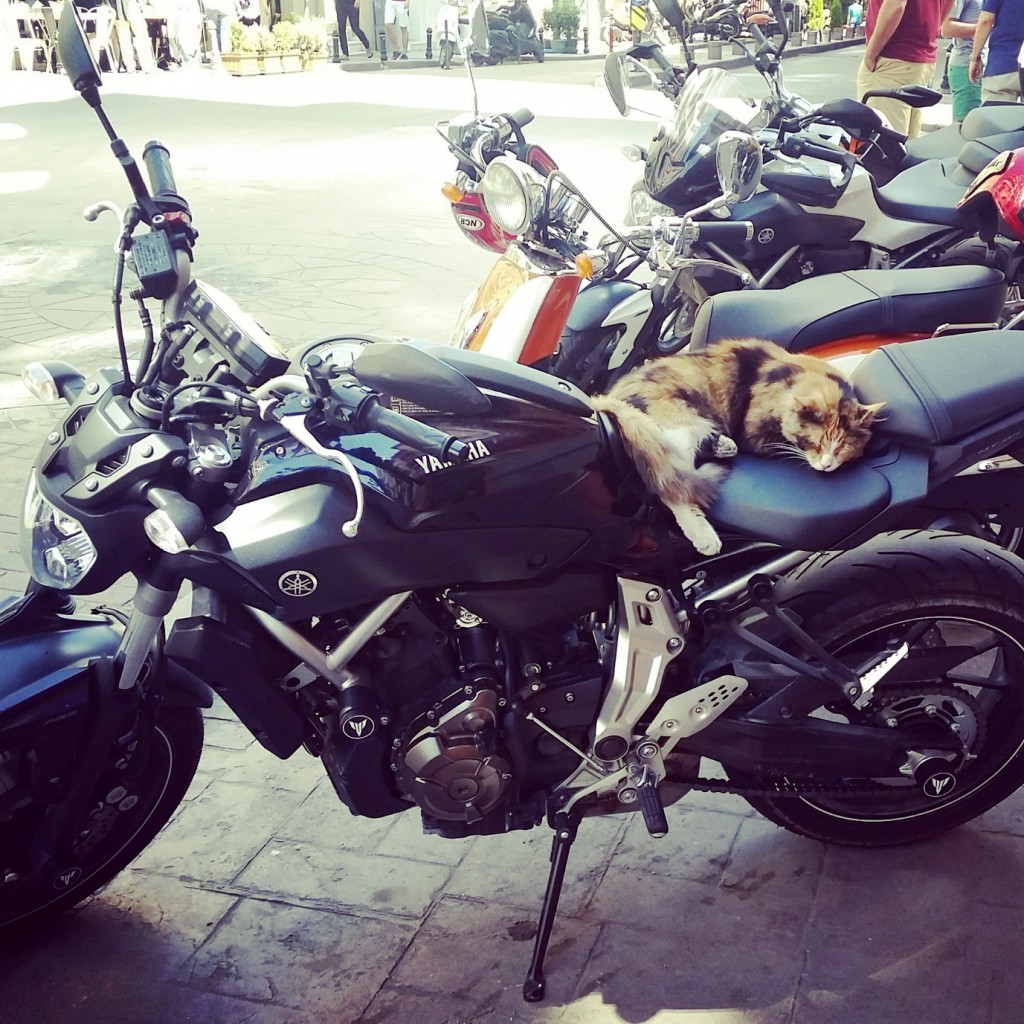 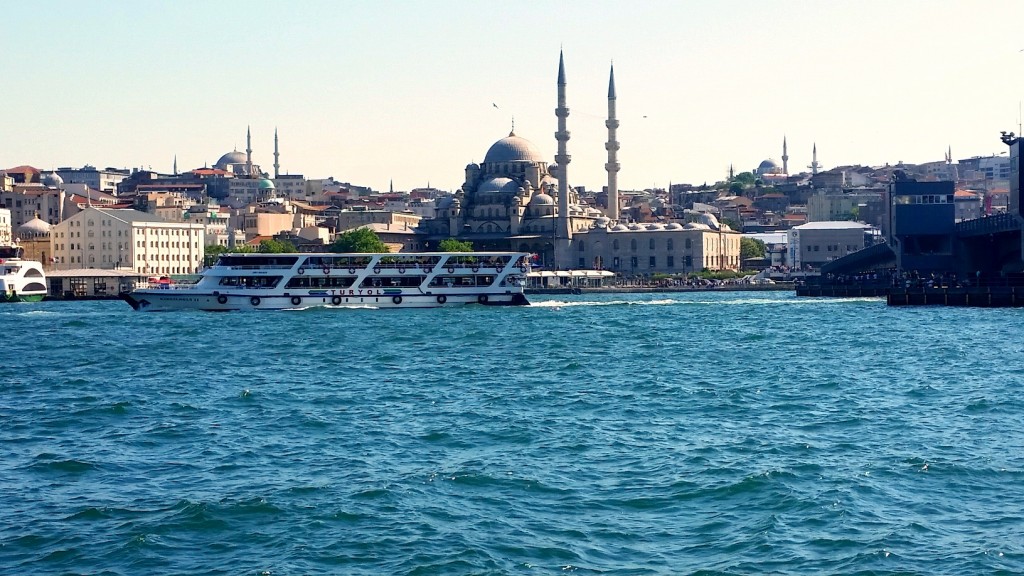 A boat tour along the Istanbul strait: From Kadikoy to Eminons and back

Between Orient and Occident 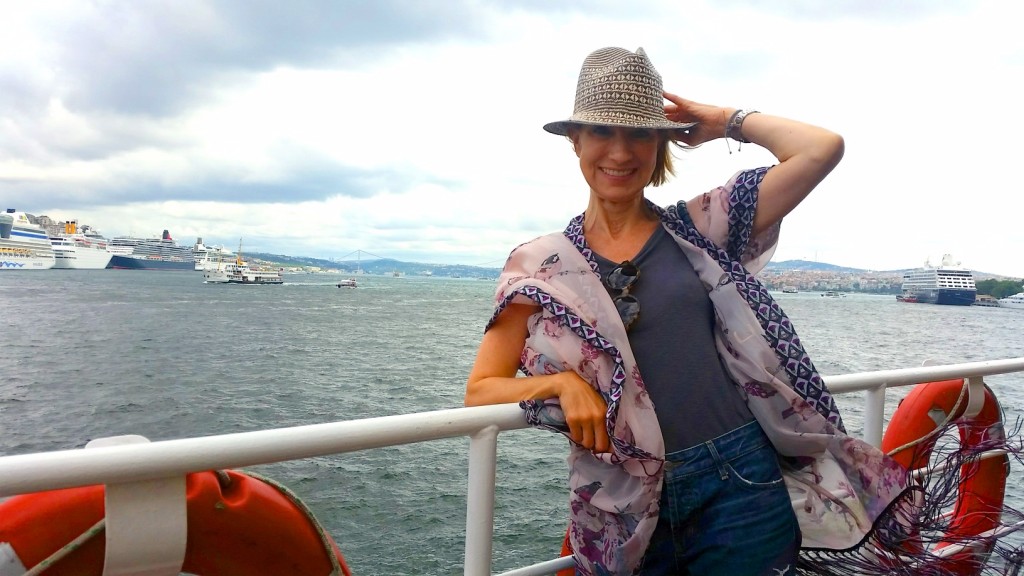 Quite windy here! As it is, I have to hold my hat, so it doesn’t end up in the Golden Horn or Bosphorus 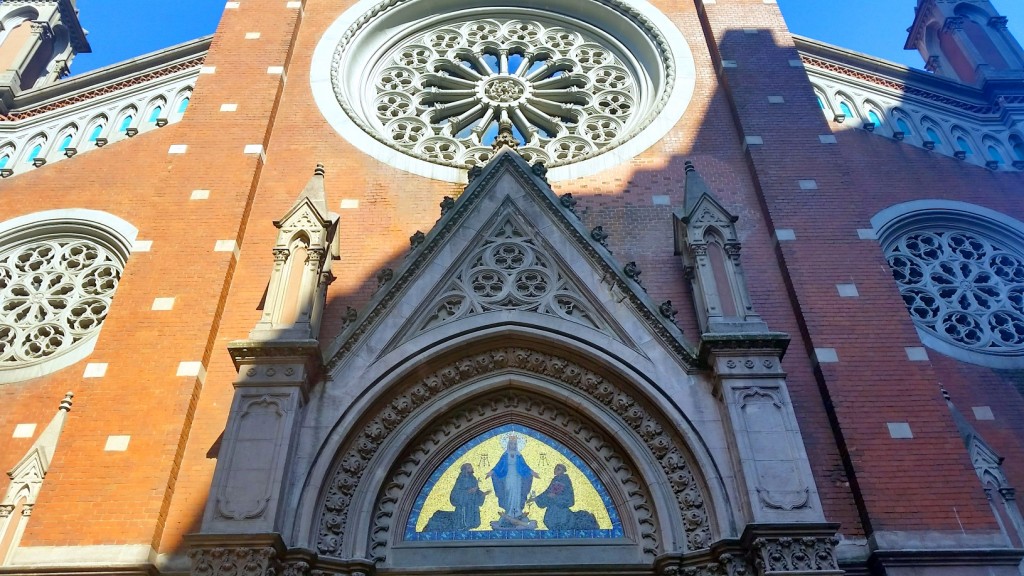 In Istanbul the religions live peacefully together. Here the Catholic Church St. Anthony … 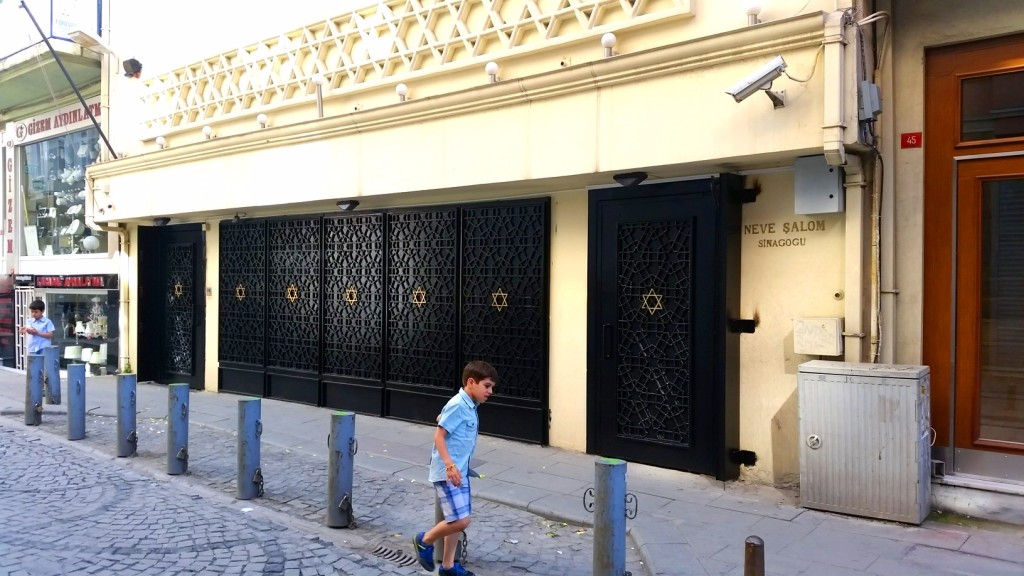 … there is the ‘Neve Salom’-Synagogue. Both in the former European quarter Pera 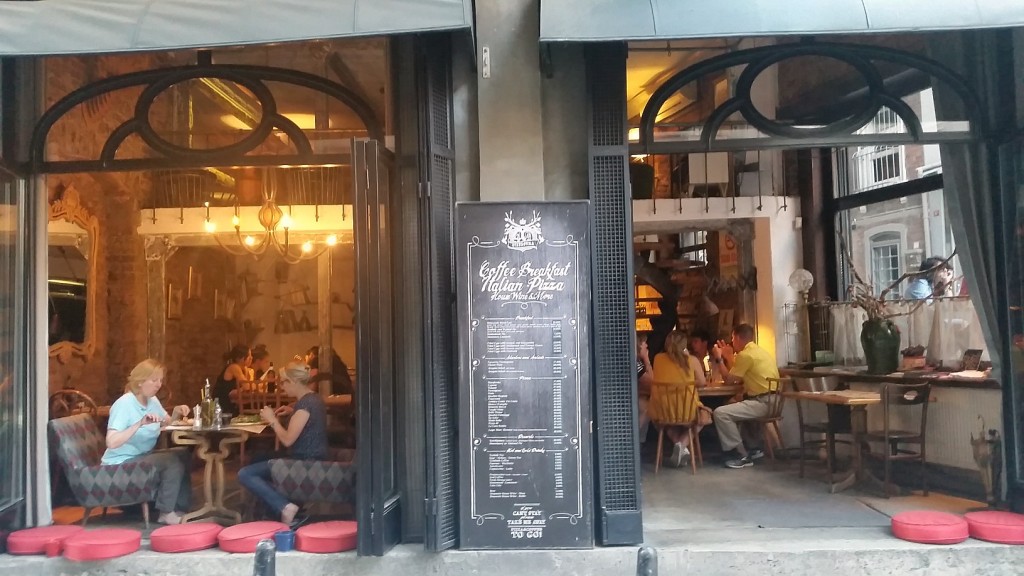 There are a lot of inviting cafes in Pera 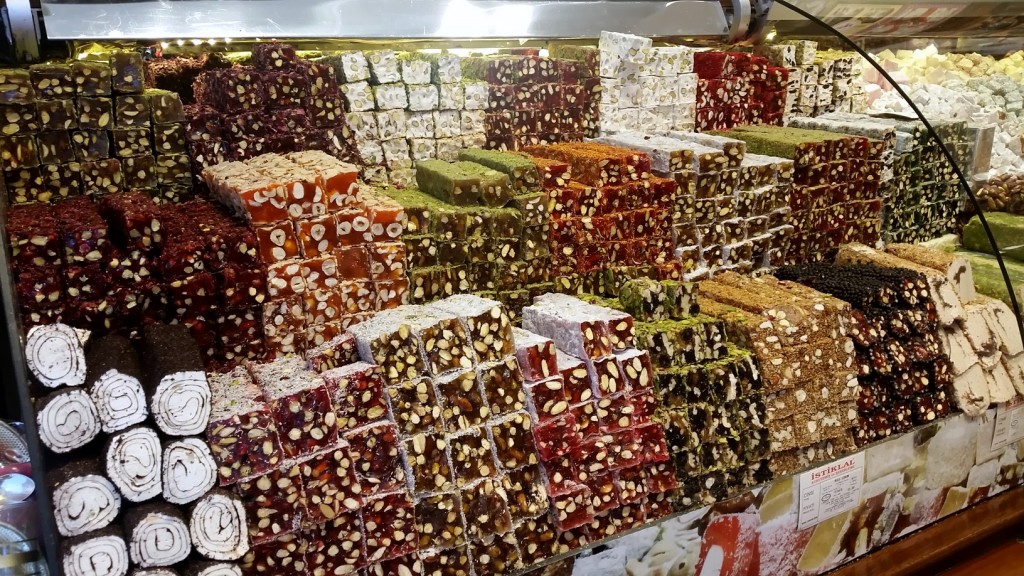 Not for calorie counters: Turkish delights like here on the ‚Istiklal Caddesi‘ 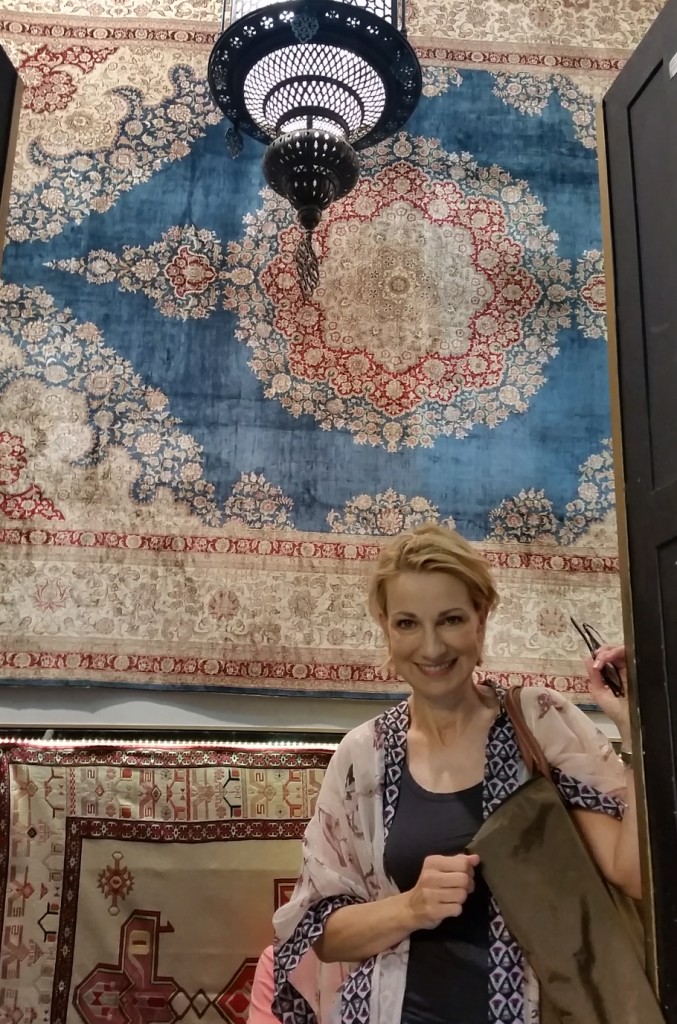 There are many carpet dealers at the ‘Grand Bazaar’. The most talented (!) 😉 seller I met at ‘Rug & Rug’ 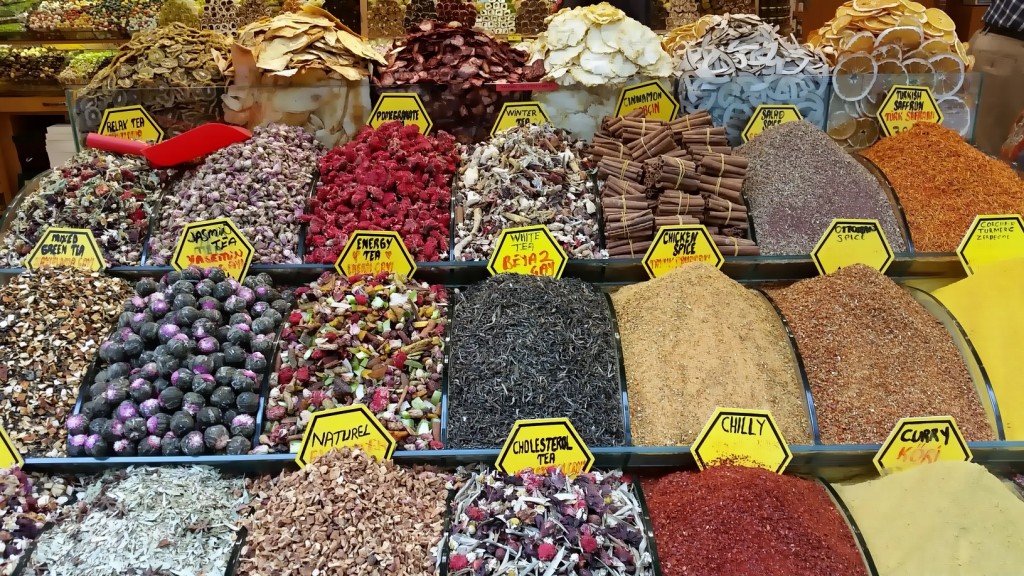 I bought spices at the ‘Grand Bazaar’. Cooking at home – sounds like a plan 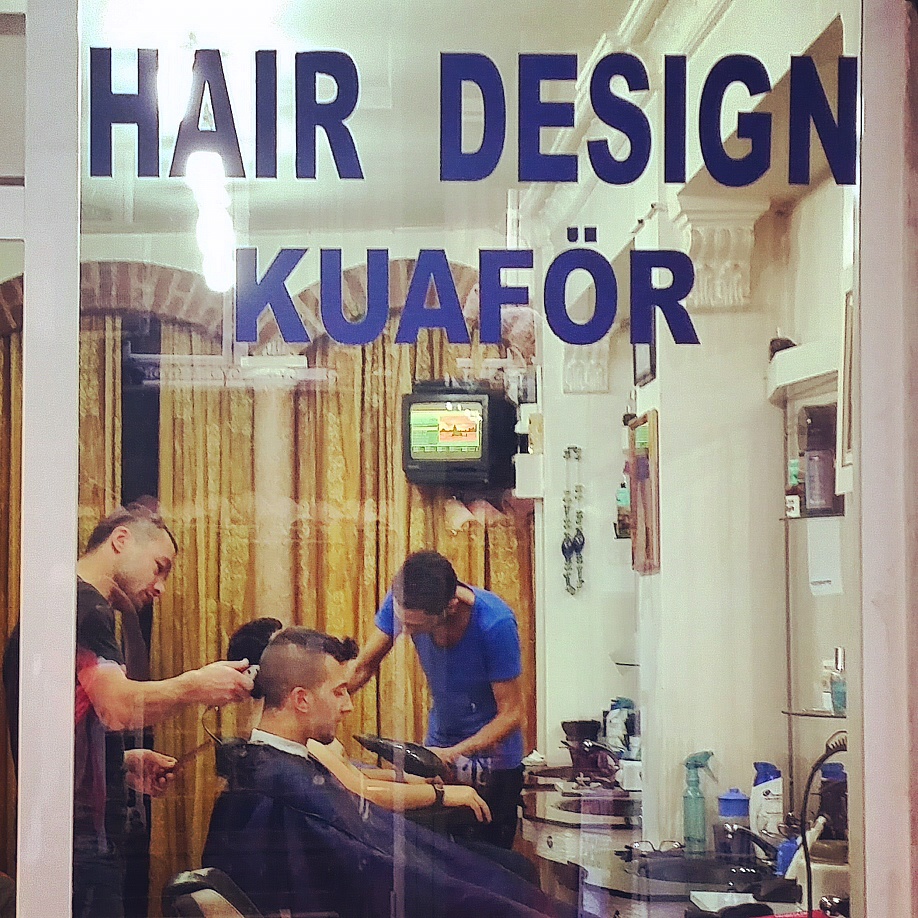 In the mood for a new hairstyle? Kuaför in the Pera district

English is not a matter of course:
A business card of your hotel can help to show the taxi driver where you want to go. 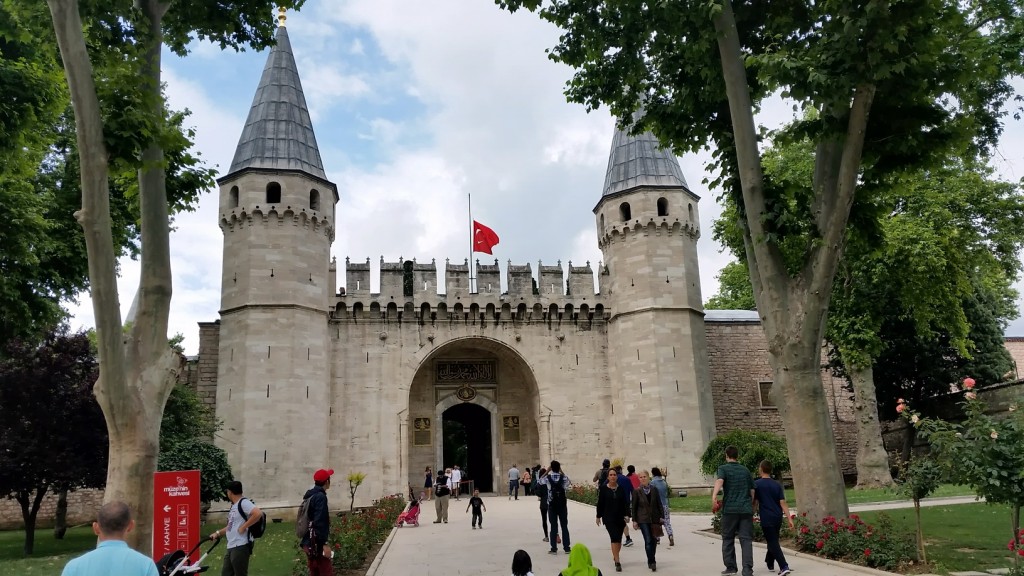 Worth seeing: the Topkapi Palace

By the way following tip saves time and nerves: at the Topkapi Palace I actually hired one of the guides who work there: Mustafa sneaked me past the sheer endless queue and explained – in perfect German – the whole palace including harem and armory to me. Since then I know that the word kiosk has its roots in the Turkish language. The length of the tour is negotiable and was absolutely worth its 50 €. 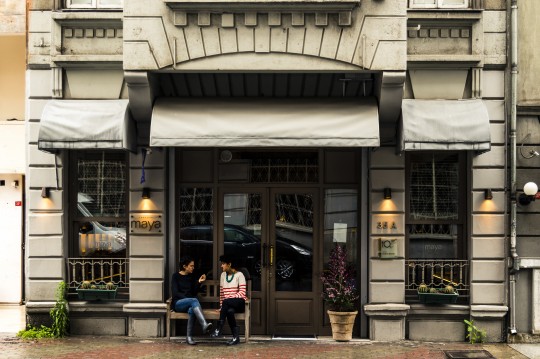 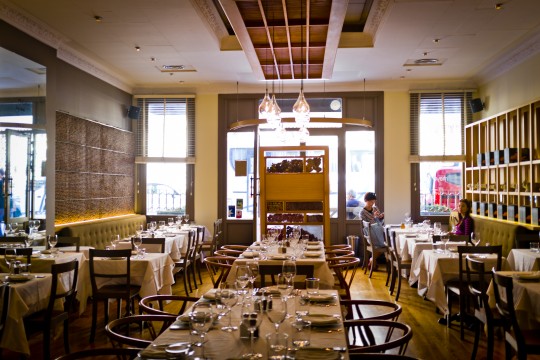 … there is great European-Turkish crossover cuisine

A perfect day on Fischland-Darß
Vacation in Germany What: My favorite tips for sightseeing and…