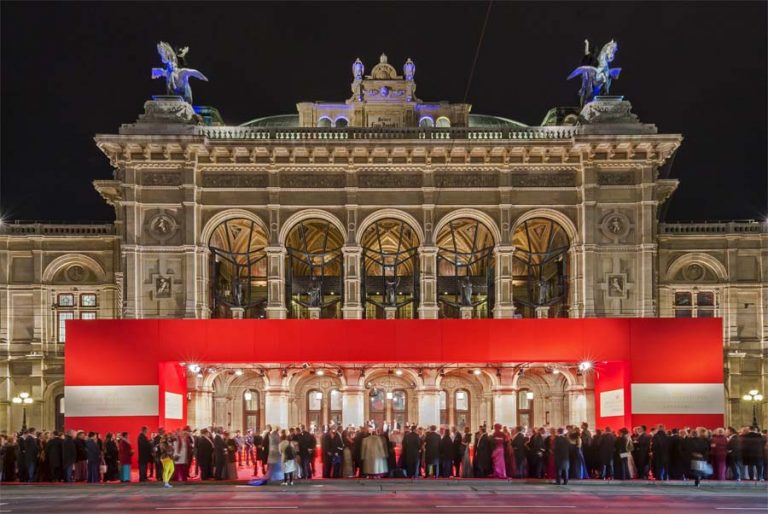 The arrival of the guests infront of the magnificent Staatsoper in Vienna, where the annual Opera Ball takes place. Photo: Wiener Staatsoper

Who doesn’t dream of it? One time hovering over the parquet of the Vienna Opera Ball in a roaring robe in three-fourths. For me this dream came true this year – including stage table with unobstructed view over opera stage and boxes. 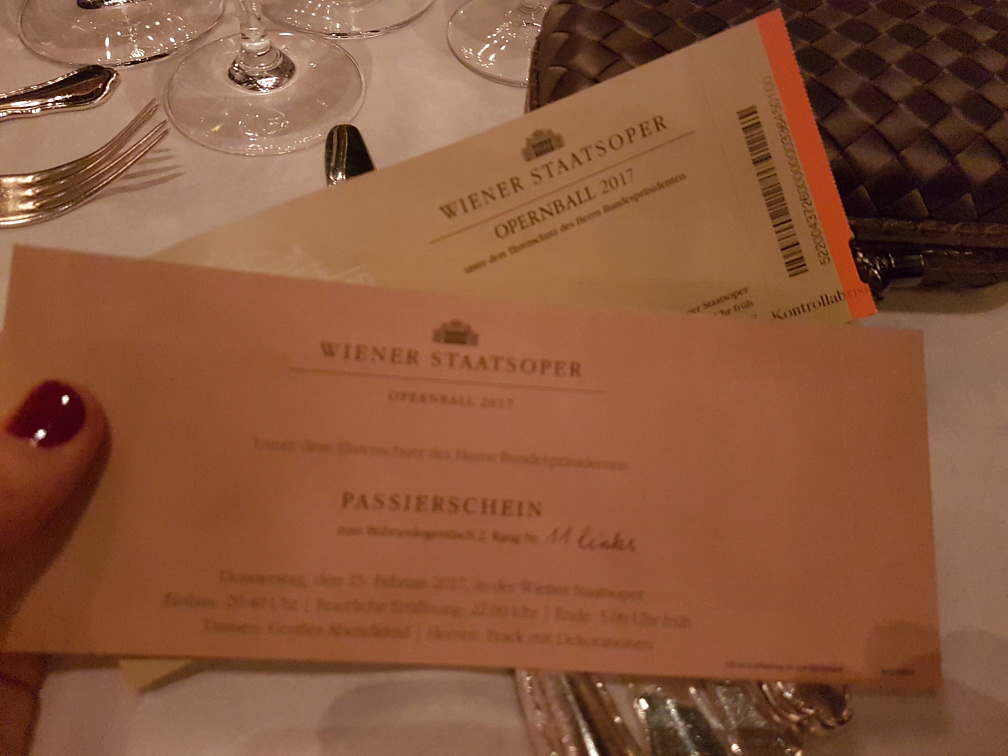 The “proof of legitimation” of the evening: My opera ball ticket and my entry permit

The Vienna Opera Ball is by all accounts a great event that must be thoroughly prepared. Entrance tickets and lodges must be requested and booked in advance (by writing), as well as hotel and arrival. While the gentlemen appear in tailcoats, the question of clothes for the ladies is certainly one of the most central ones. A dress for the opera ball has to be long, an elegant robe, which underlines every own type. It was quite interesting how variable the term elegance was interpreted by the ladies. And please no doppelgangers! The nightmare par excellence, when you suddenly face your dress. I chose a dream robe of dark green velvet from the Munich design duo Talbot Runhof, in which I felt very comfortable. 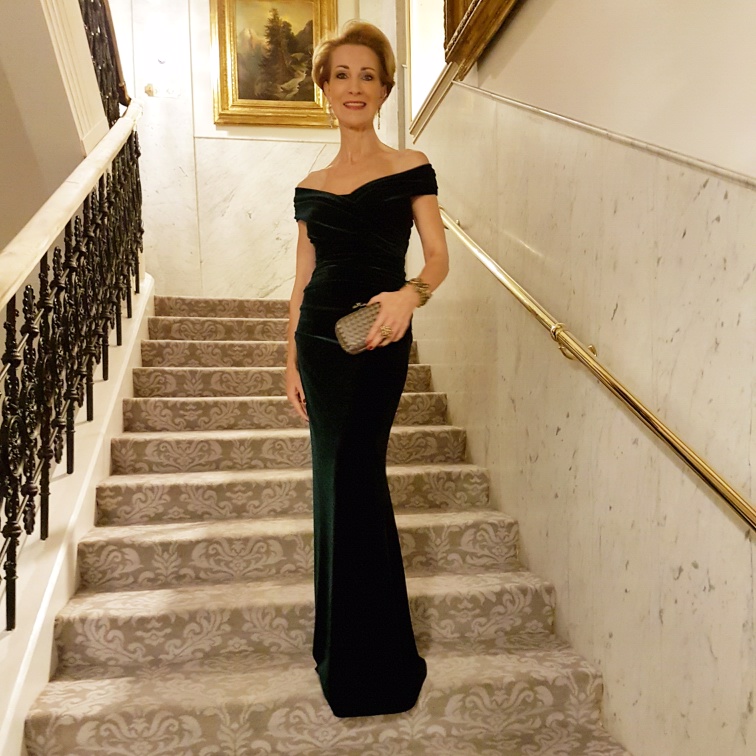 My look for the Vienna Opera Ball: A décolleté emphasized robe in dark green velvet by Talbot Runhof. A clutch from Bottega Veneta and high heels by Jimmy Choo

The Vienna Opera Ball probably polarizes like no other social event. Degraded to a boulevard event in some places, where guests of all kinds and VIP categories romp about, the Vienna Opera Ball is considered the most elegant tradition of the Donau metropolis. And rightly so. The splendid halls of the state opera that have been opened in 1869 provide a perfect setting, and the opulence of the festively decorated rooms make the “k.u.k.” era lively. What an honor! 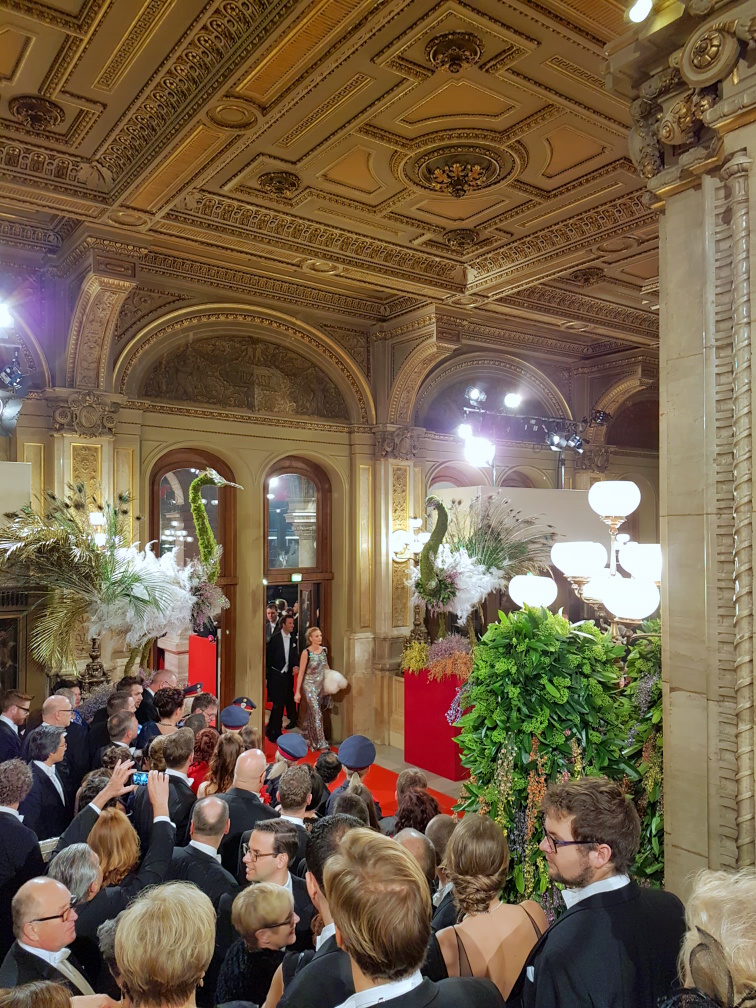 Dense crowds around the red carpet, where the arrival of the celebrities was observed and commented

The grande dame of the Opera Ball Elisabeth Gürtler handed the scepter over to her successor, Maria Großbauer, who for the first time was responsible for the overall organization as well as this year’s motto “All Opera”, including the guest list. Among them was the architect Jean Nouvel (Les Galleries Lafayettes Berlin), the head of the IMF (International Monetary Fund) Christine Lagarde, publisher Liz Mohn and billionaires widow Ingrid Flick. But also colorful birds such as building contractor Richard Lugner, who flies in well-known personalities from the USA for a lot of cash – this year’s actress Goldie Hawn. As well as former participants of the RTL jungle camp. It is this special guest mix that makes the evening a dazzling one. To see and to be seen and a bit of gossip. 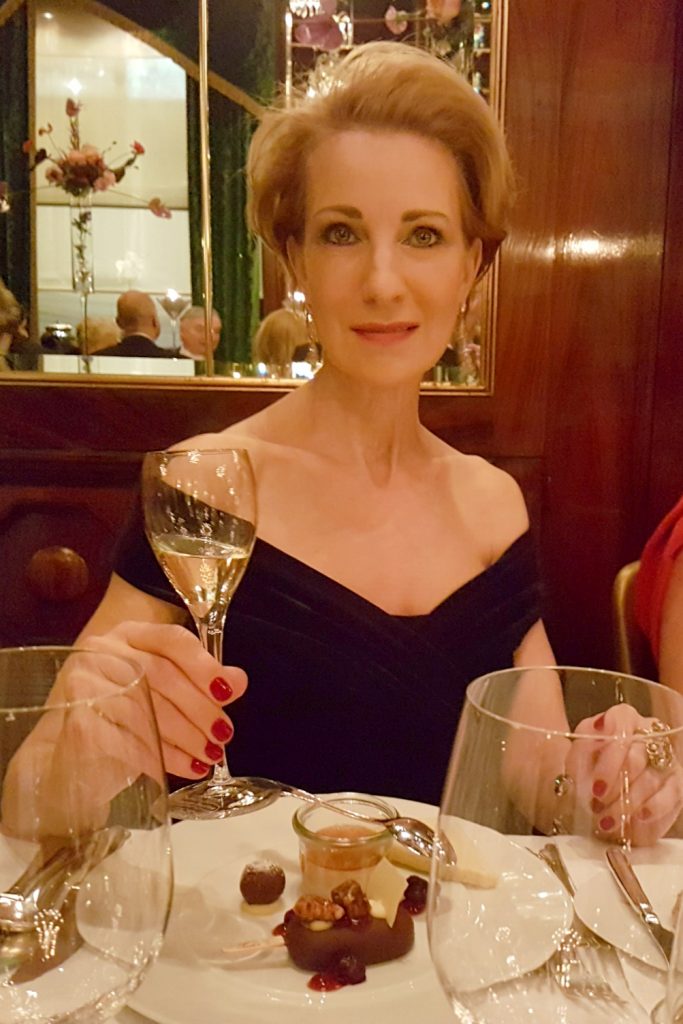 At the Opera Ball Dinner at the Hotel Sacher: Cheers to a bouncing ball night!

For me the evening started with a champagne reception, followed by an exclusive, delicious five-course meal in the green salon of the Sacher Hotel, where I also stayed. What a luxury, just in terms of the short distances. At 9:30 pm we went to opera house opposite the hotel, where the 5,000 guests of the ball floated on the left and right of the red carpet over the grand staircase (main stairs) that were festively decorated by lush floral arrangements. Passing by flashes of lightning and cameras, the ball visitors spread out on the five floors of the opera house. At 10 pm, the ball was opened in the presence of Austria’s just elected German President Alexander van den Bellen and Federal Chancellor Christian Kern. 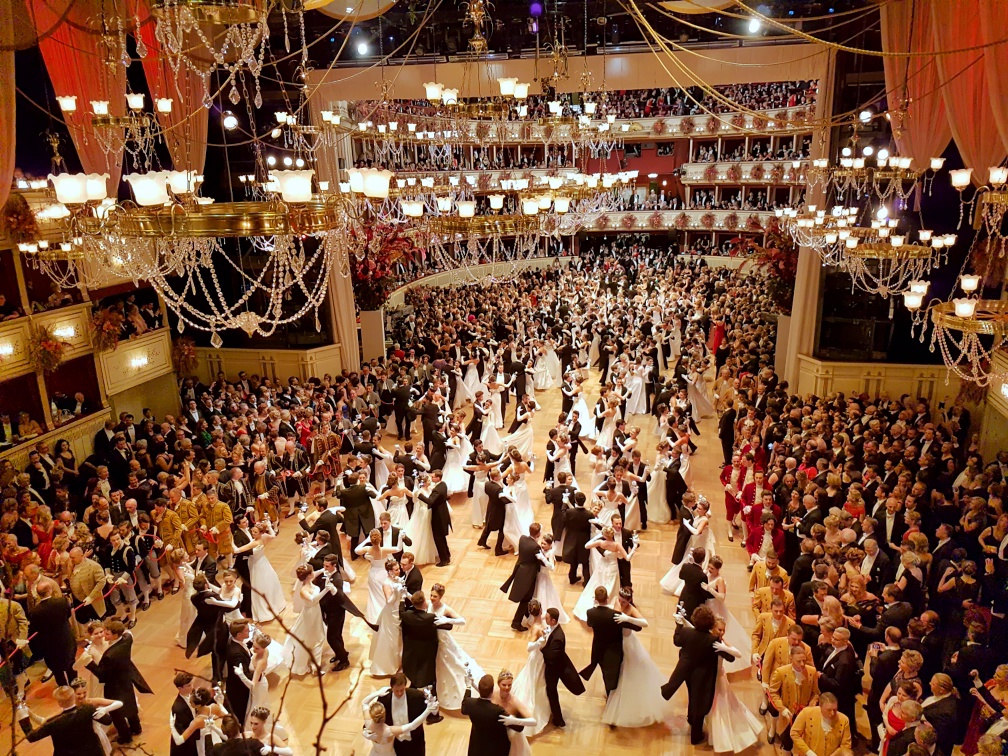 Too beautiful: The opening waltz of the debutants

When the 144 debutants arrived, I became a little sentimental. Actually, my oldest daughter was supposed to take part in the opening, but unfortunately she sustained a torn ligament and could therefore not participate in the extensive and elaborate rehearsals of the debut. The young ladies – all in white evening dresses – wore a Swarovski diadem designed by Karl Lagerfeld this year. Each one looked like a princess, simply adorable! The ballet of the state opera enchanted with a performance and the subsequent performance of star-tenor Jonas Kaufmann did not only inspire me. Then it was finally time for the “All Waltz” – left to the left, of course – and the orchestra played until the early morning. 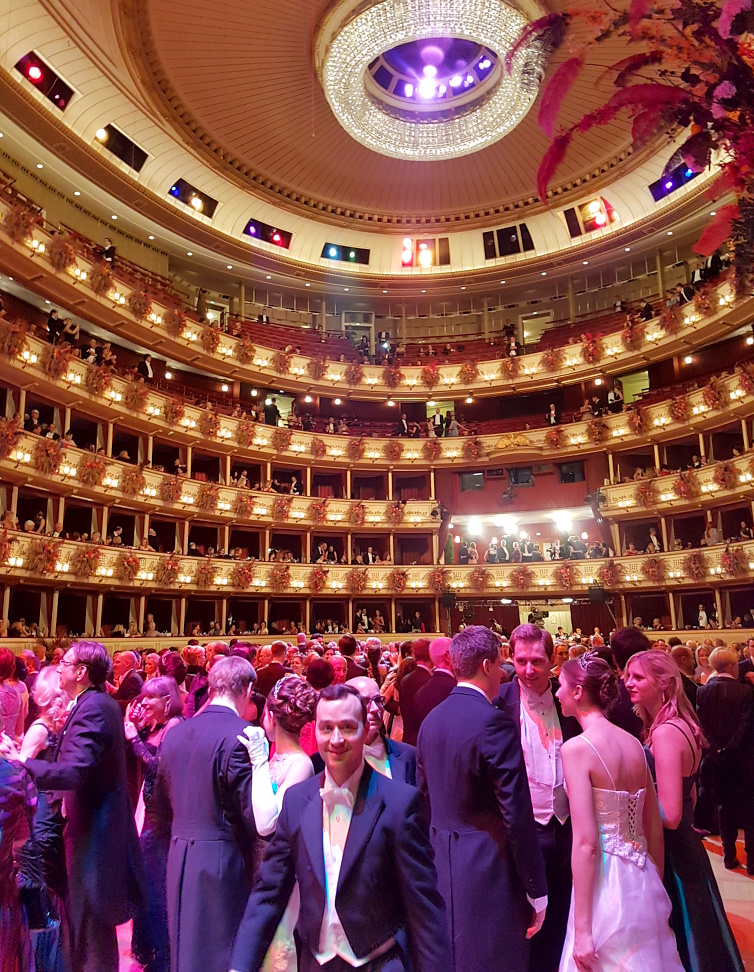 The imposing Grand Hall in the shape of an ellipse with its many boxes and ranks, which extend over five floors

Strolling around is part of the event, even for the guests of a lodge. Because there was program on all levels of the opera house. One could try ones luck in the casino, in the basement disco or take part in one of the popular quadrilles dance in the Great Hall. There were culinary servings from “slow food” to the classic sausage. The cloakroom of the philharmonics converted itself into a wine venue; the legendary Viennese Café Zum Schwarzen Kameel was represented with a branch as well as the best Austrian winemakers with seven wine bars. By happenstance I accidentally got into the staff canteen in the catacombs of the opera at an advanced hour. Opera stars, stage workers and ball guests sat together with liver cheese pies and beer (or a last champagne), and rested their tired feet. At five o’clock the ball of all the balls came to an end. It was already bright outside and the birds began to chirp. What a memorable night! BvH 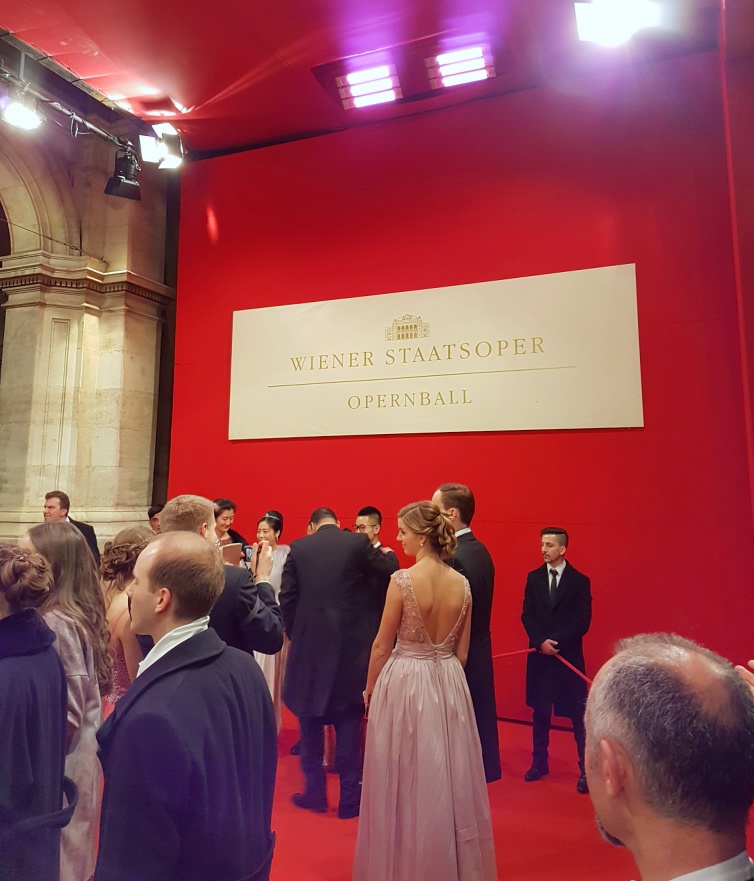 The Red Carpet is reserved for VIPs at the Vienna Opera Ball. All other guests enter the Opera House on the left and right side

About the 61st Vienna Opera Ball: 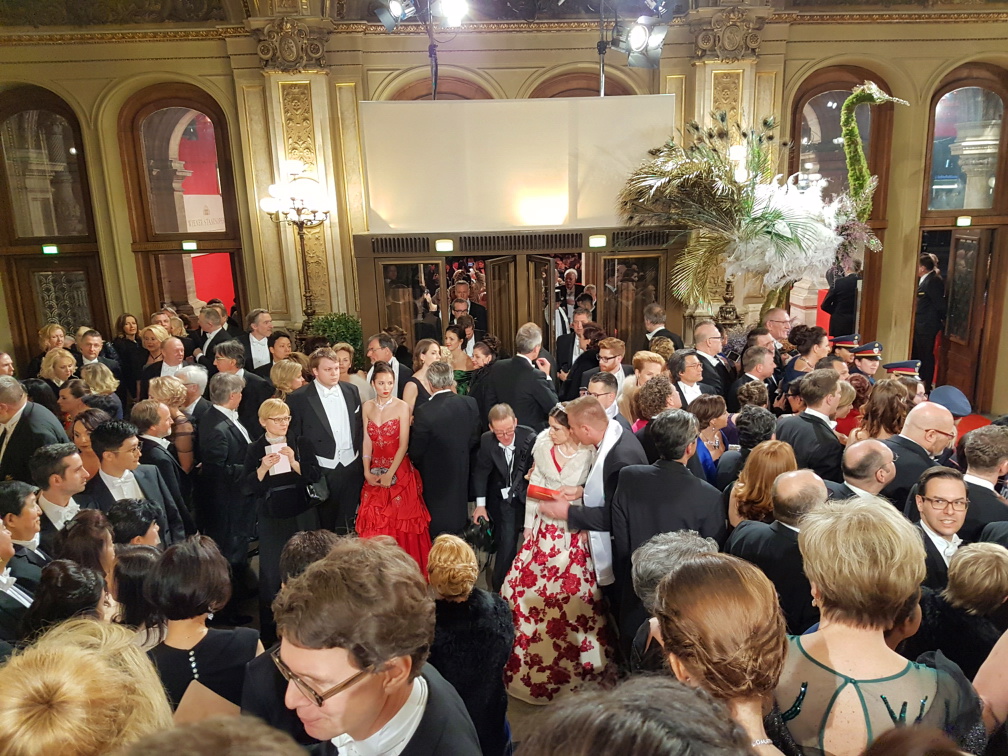 In the Opera foye, the motto is “seeing and being seen”

1.) Do not appear with an empty stomach, eat something in advance

2.) It is warm in the lodges. Therefore do not forget a hand fan

3.) Before ordering ask for the price of the drinks: The bottle of champagne costs 500 euros

4.) Take flat shoes (eg ballerinas) as a substitute. From 3 o’clock in the morning this isn’t a sin of style

5.) Take the “Libretto” opera ball-book which includes an overview of rooms, music, culinary and service 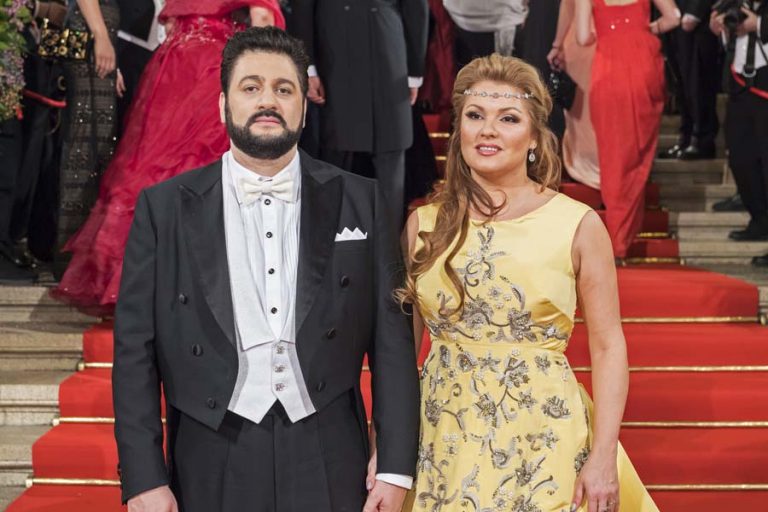 Even though the loge first appears to be the “best place”, I recommend a stage table. From there all participants have a wide-ranging view, which in comparison a lodge only provides from the front places.

By the way: If you would like to lodge in one of the 149 rooms in the neighboring Sacher Hotel, you should already request for the 2018 Opera Ball. 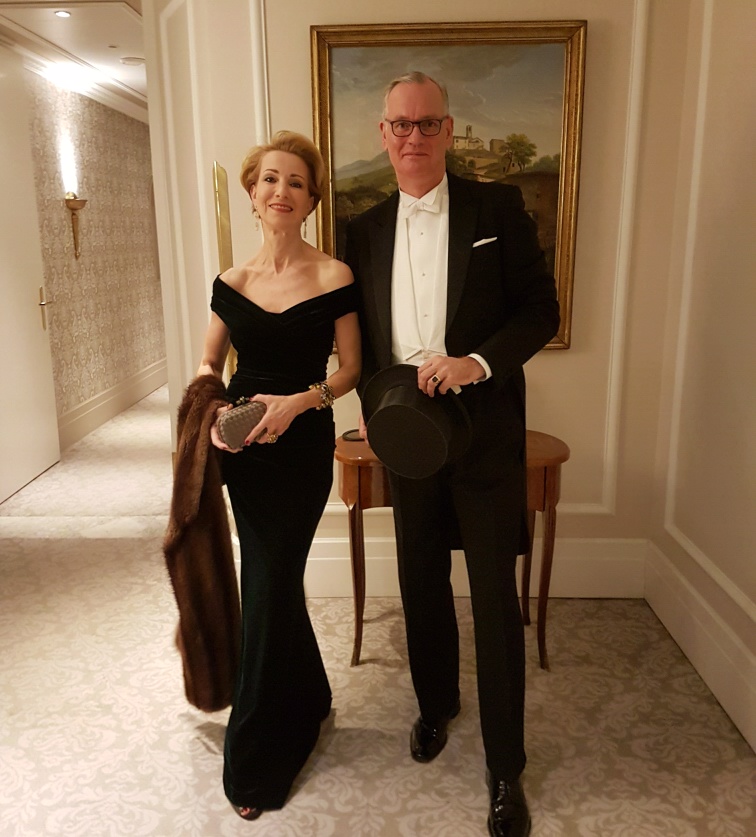 Ready to rumble: My hubby and I well prepared 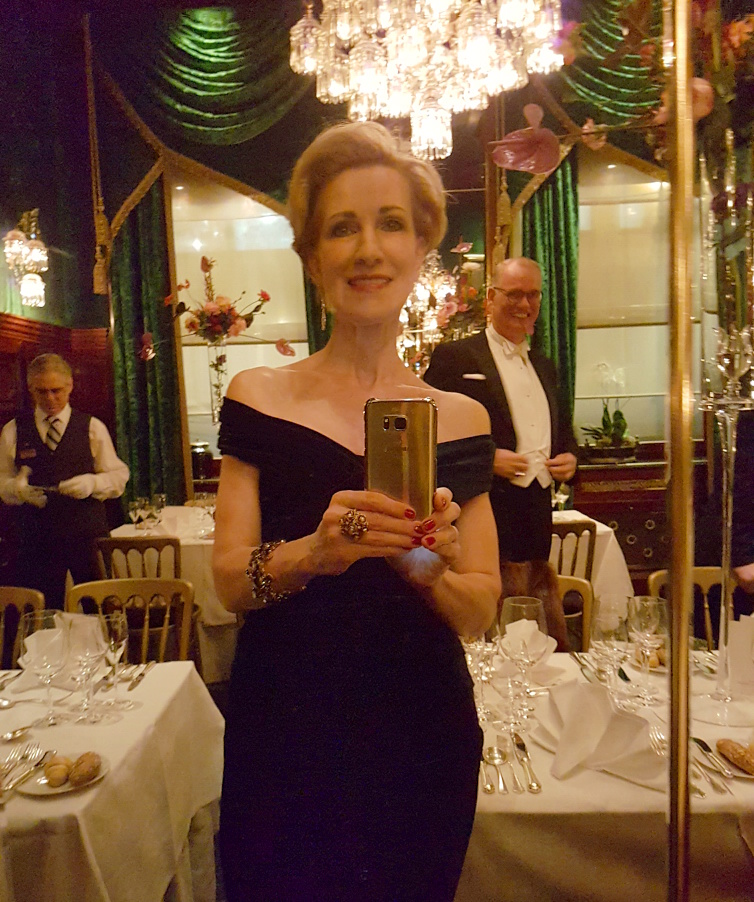 The Green Salon at the Hotel Sacher: Here I enjoyed the Opera Ball menu. And yes, green is my color! 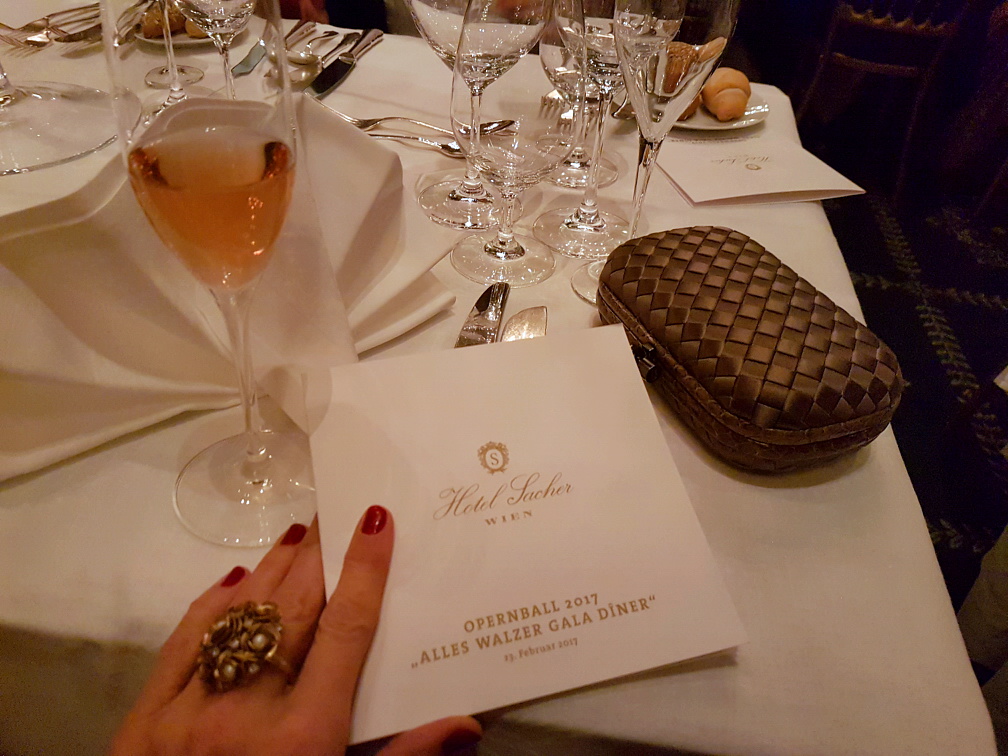 Just a look at the menu … 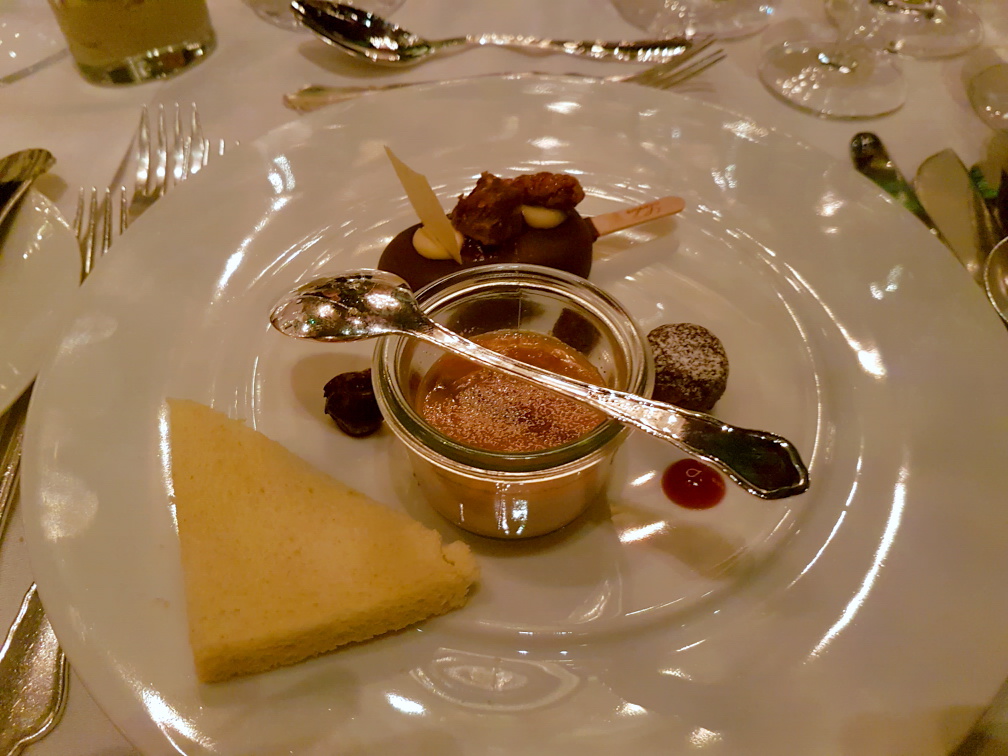 … and the dessert with chocolate variations 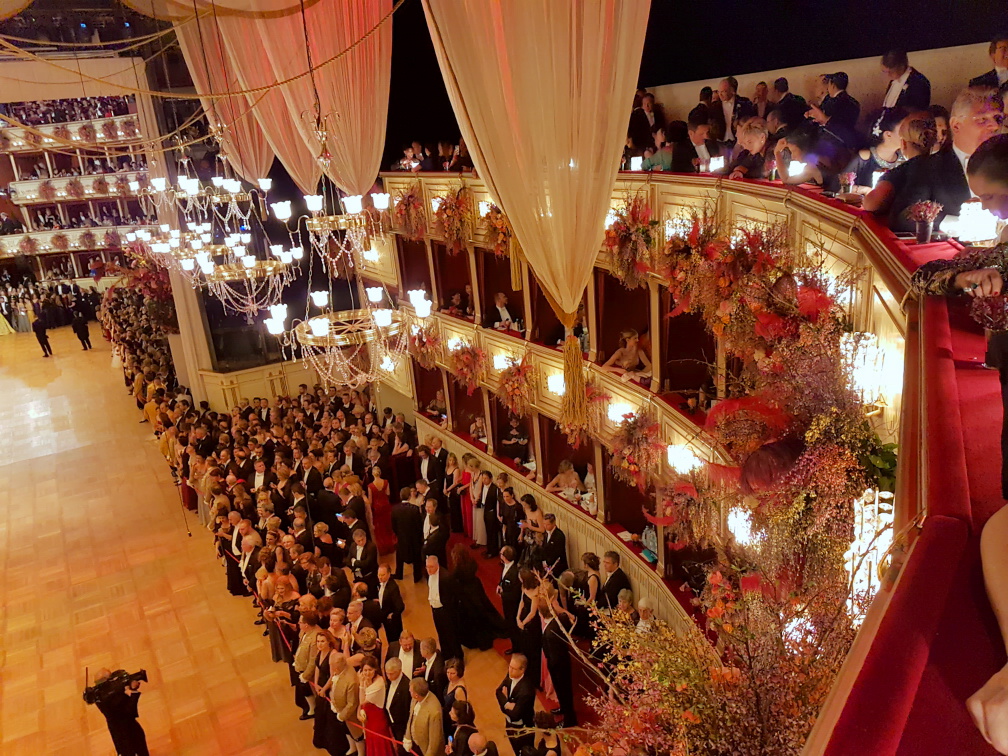 General tension before the entry of the debutants 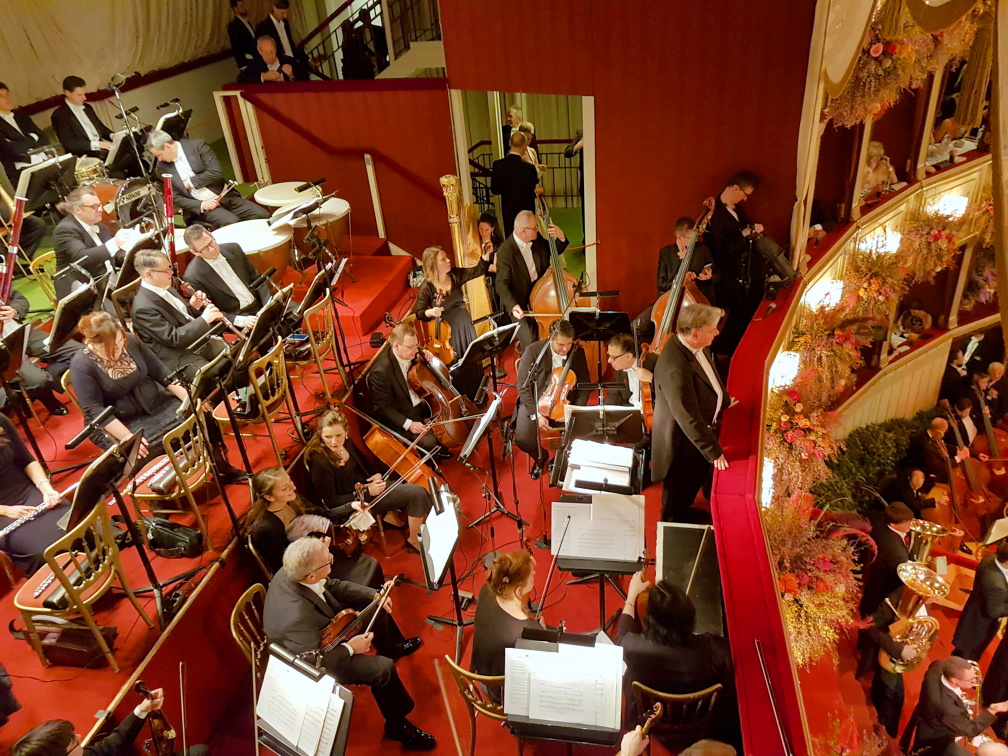 The Orchestra of the Vienna State Opera 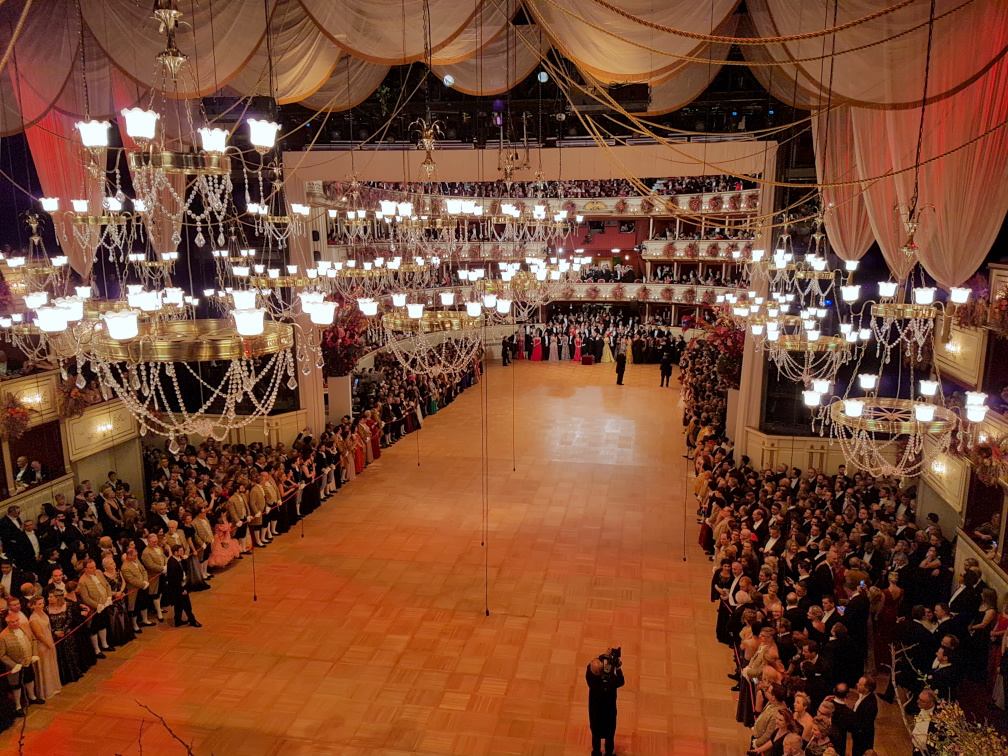 Space with a view: From my stage table I could enjoy a wide-ranging view … 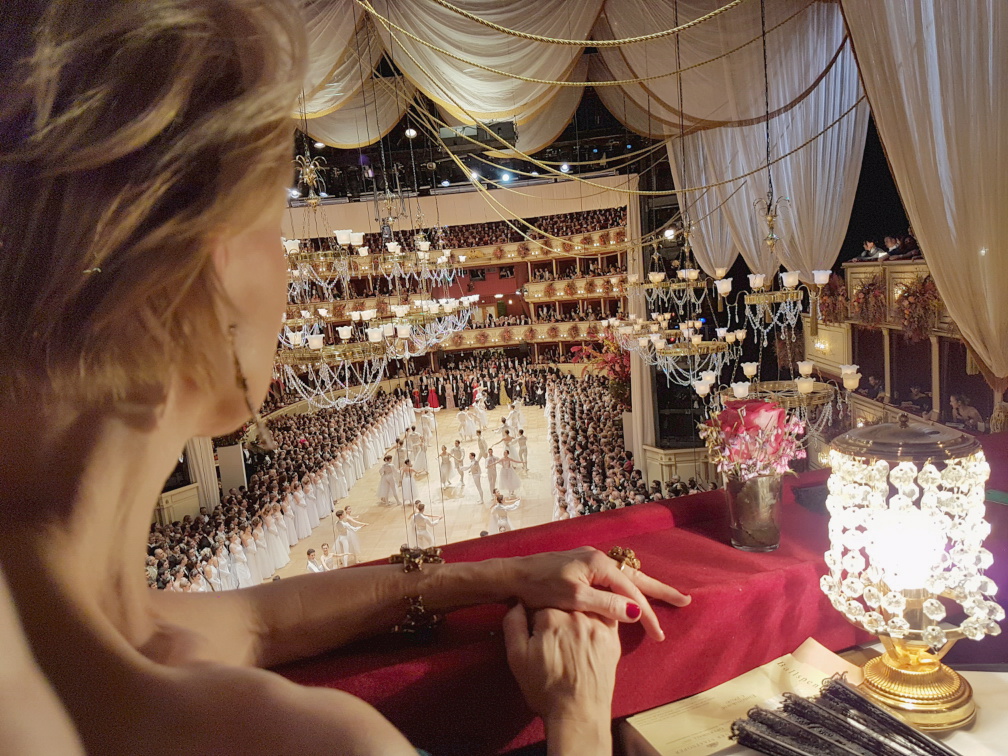 … including the performance of the Corps de Ballet of the Vienna State Opera: 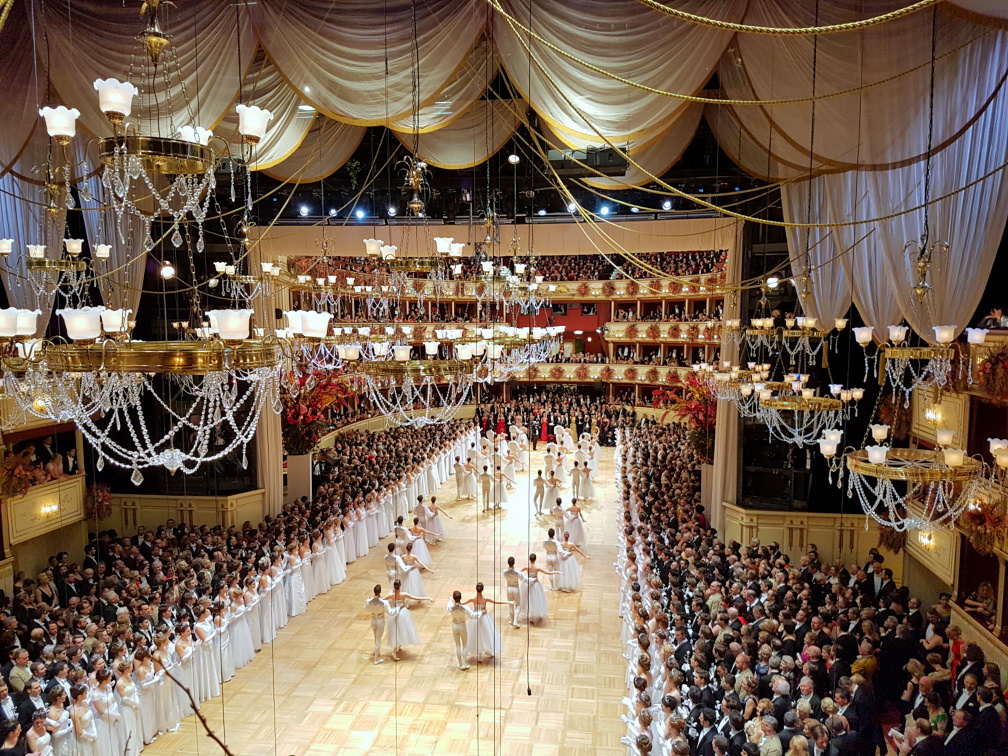 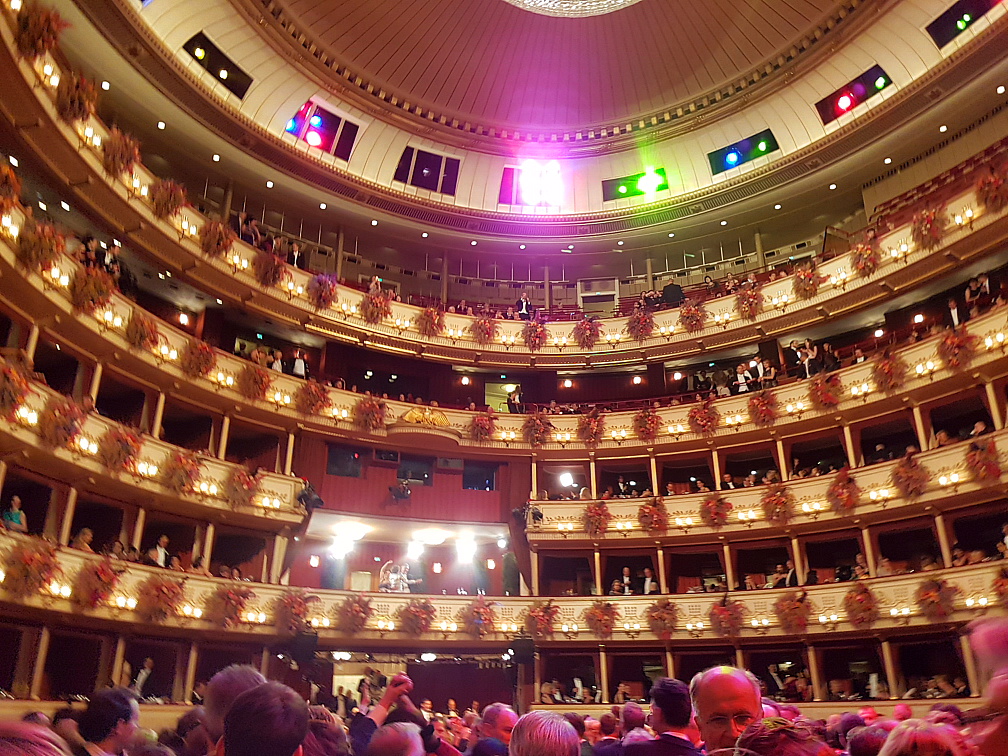 The Great Hall with its boxes. In the middle, the Emperor’s lodge, in which the Austrian Federal President Alexander van den Bellen and Federal Chancellor Christian Kern were placed 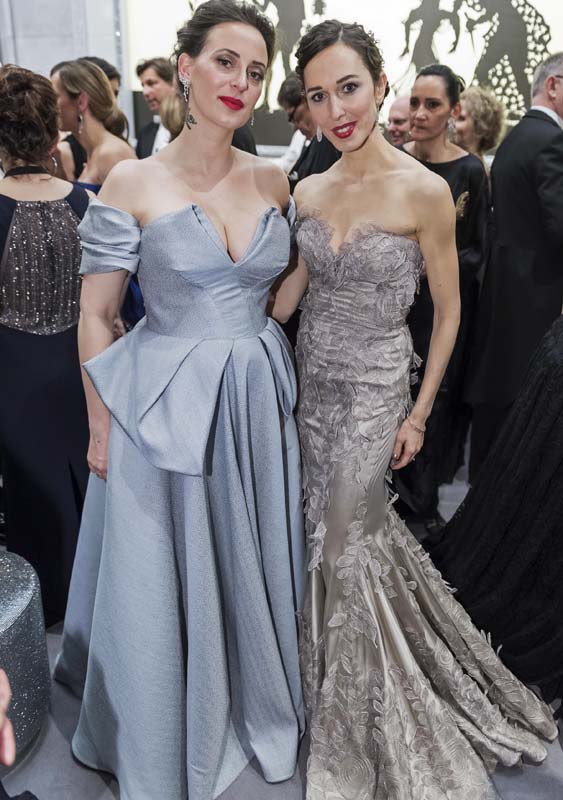 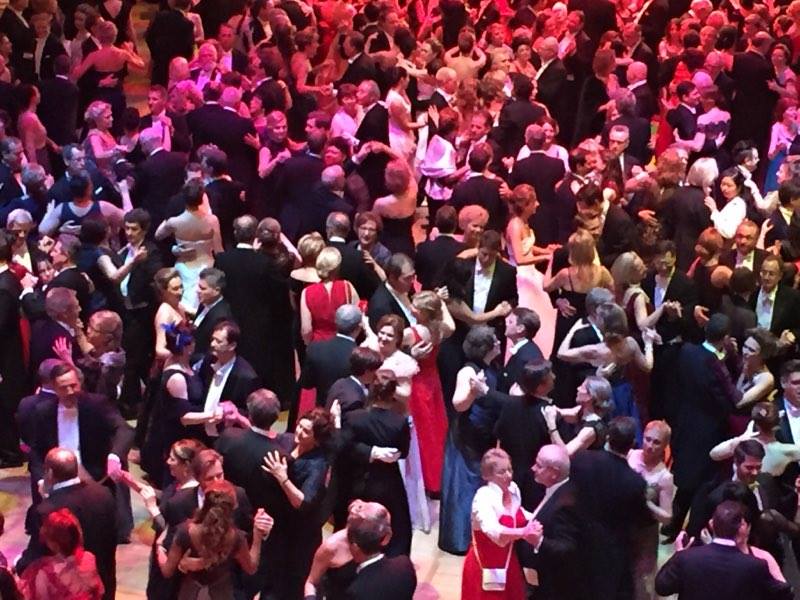 It’s all about waltz! Whoever looks closely, recognizes me in the middle ;-))) 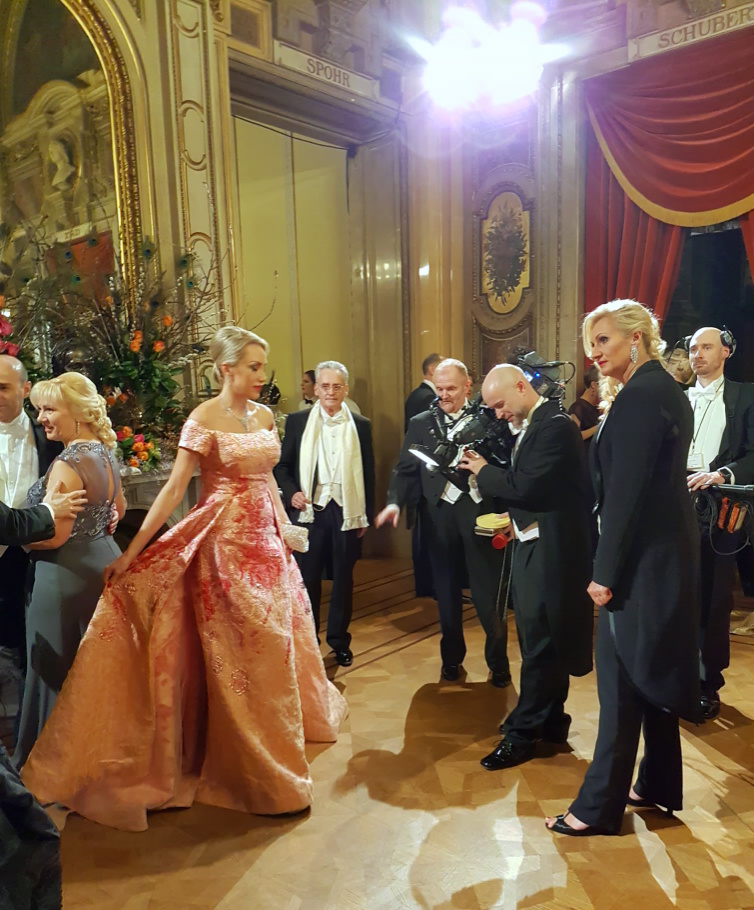 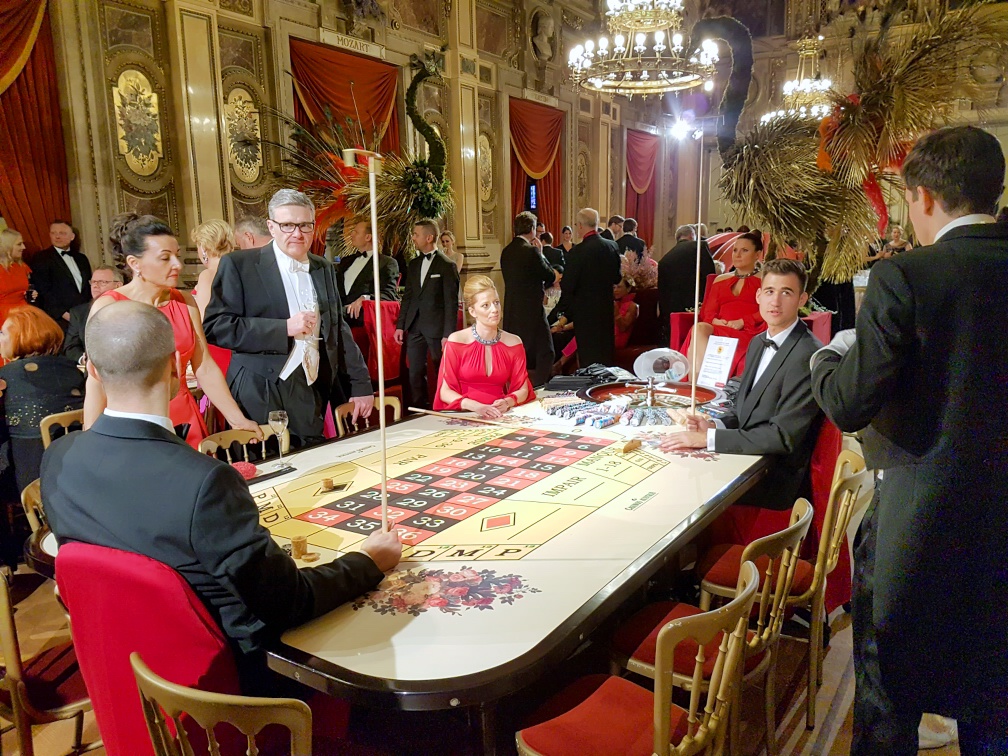 What an elegant and splendid location for the specially built casino: under the chandelier one could try his luck 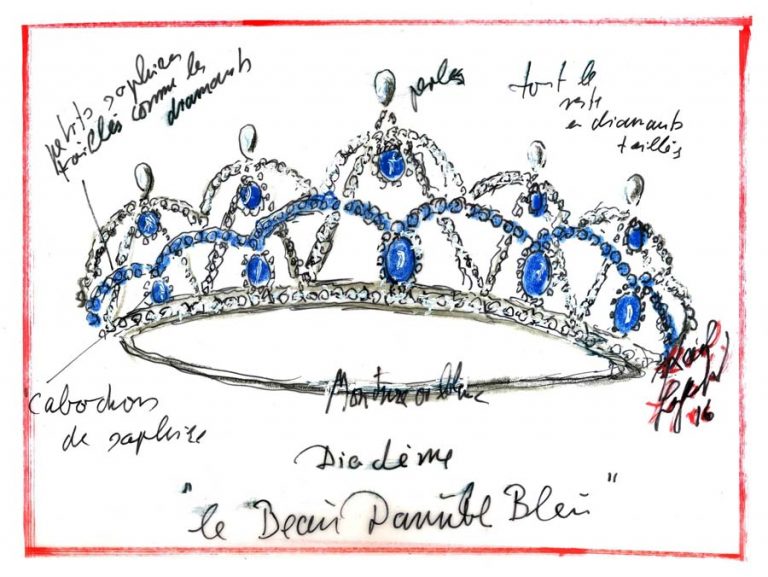 Once a princess with a crown: Chanel-Designer Karl Lagerfeld created for Swarovski the beautiful diadem of the debutants with with 394 crystals. Photo by Wiener Staatsoper 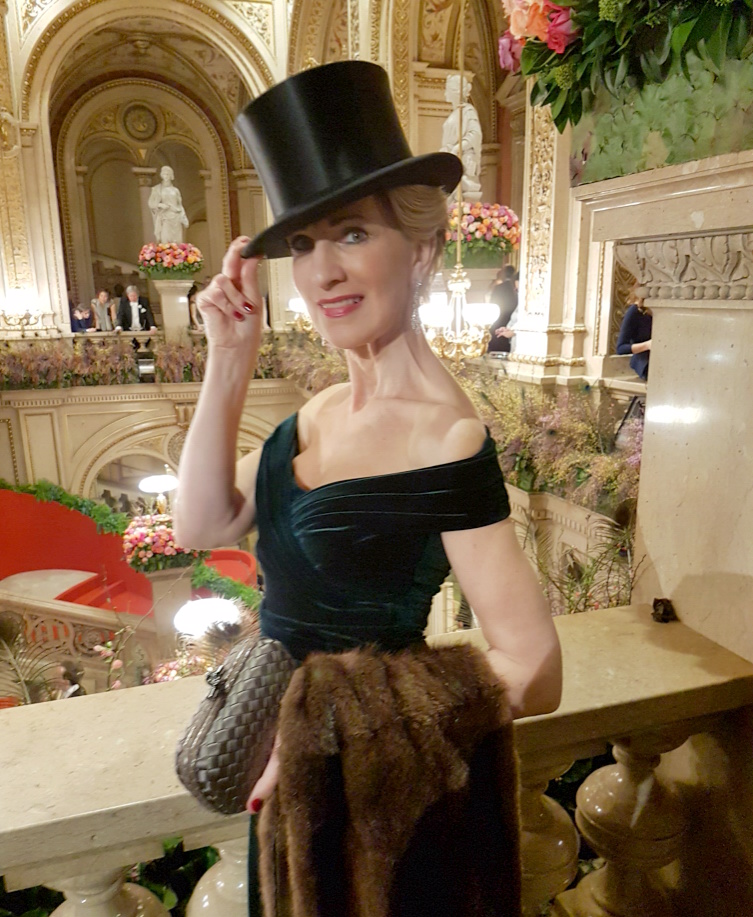 …At five in the morning I said bye bye! What a devine night!

My Long Island Summer Vibes and Hypes
What: The Hamptons Where: Long Island, USA As I recently…