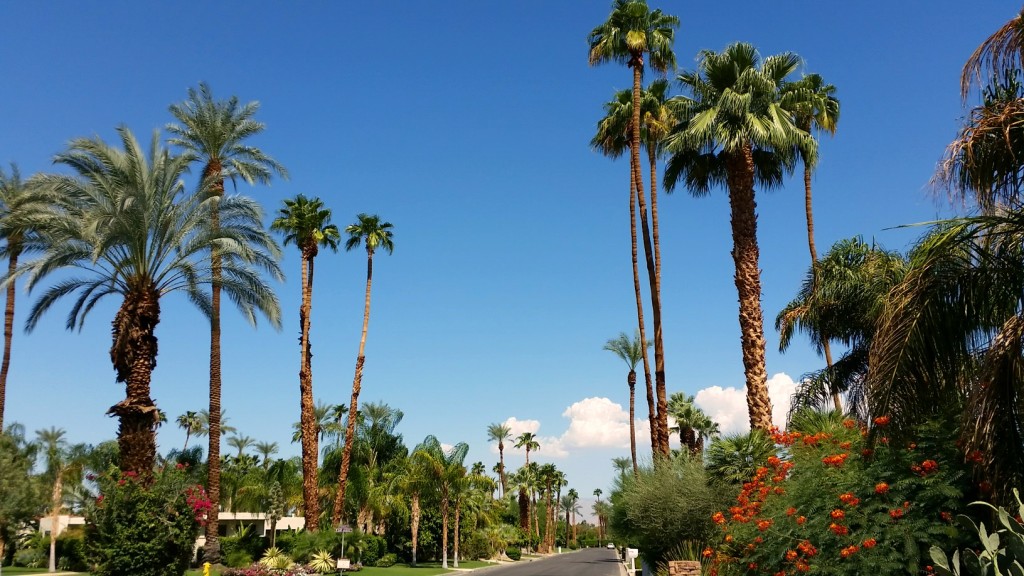 Parts of the Coachella Valley in California – known for the famous Coachella Music Festival – are cities like Palm Springs, Rancho Mirage, Palm Desert, Indian Wells. The latter also famous for the ‘BNP ParibasTennis Open’ and since 2013 the home of Jana Neudeck-Helmig, a native from Dresden in Germany. She left Dresden in 1984, before the wall came down. And for the 15 year old it was the first step into many adventures. She started in Hamburg with her training to become a Journalist and Editor and moved to Los Angeles in 1993. In 2010 she went for two years to Mexico, and in 2012 she sold her house in L.A. and came to the California desert, where celebrities like Bill Gates, Pete Sampras und Leonardo DiCaprio keep residences, where president Obama loves to play golf. The real estate expert lives on the 15th green of the famous Indian Wells Country Club. 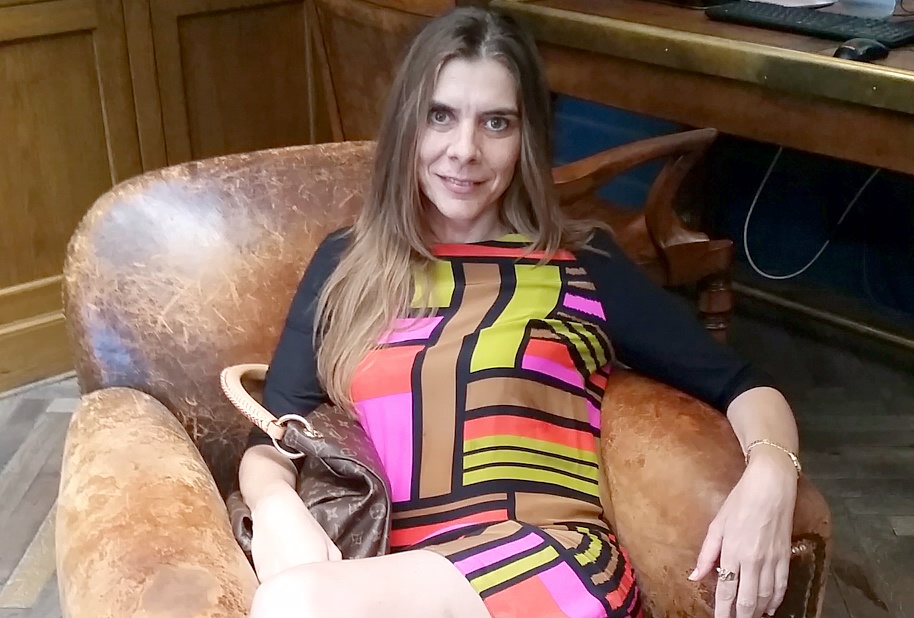 MyStylery: How do you like living in the desert?
Jana Neudeck: It is better than I thought. I am here two years now and rented to see if I could stand the heat. But it is dry and of course there is an air condition and a pool to cool down. I changed my rhythm a little bit. Get up very early, take a hike or walk, then I meet clients or look at properties. To break up the day in the summer I sometimes catch a movie in the afternoon, where it is always nice and cool. And I work a little more in the evenings. 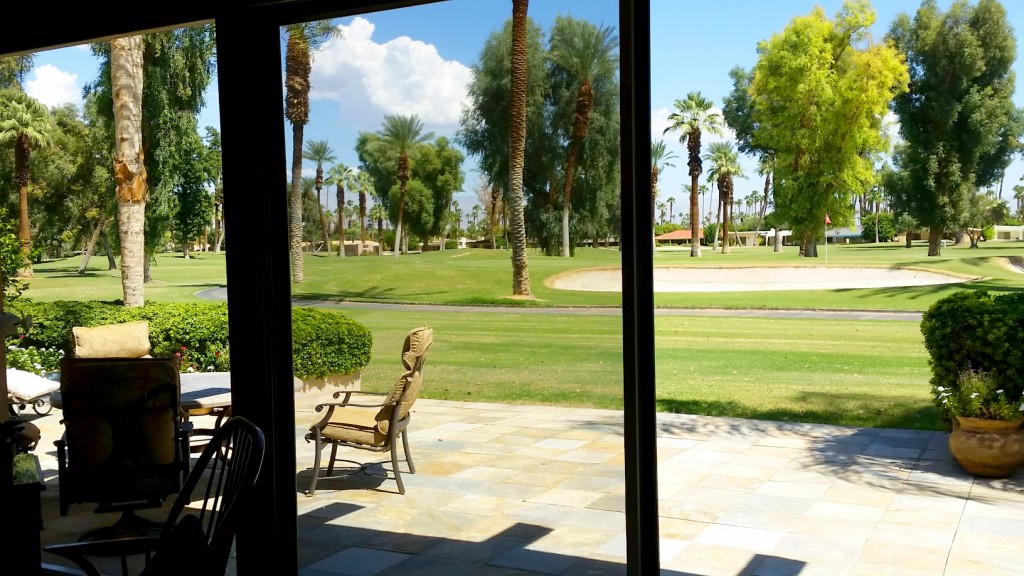 MS: The area around Palm Springs is known for its over 120 golf courses. Your terrace backs right into the Indian Wells Country Club. Seems perfect for a spontaneous round?
JN: Yes, right? I am not a member of the club, but nobody minds when you hit a few balls in the evenings. Golfing is very time consuming and as a real estate broker time is luxury for me. But my business partner, she is actually a member, and I sponsor the ‘Snowbird Open’ tournament at the club since 2014. Snowbirds are Americans and Canadians, who are coming south for the winter season and go back north in spring. 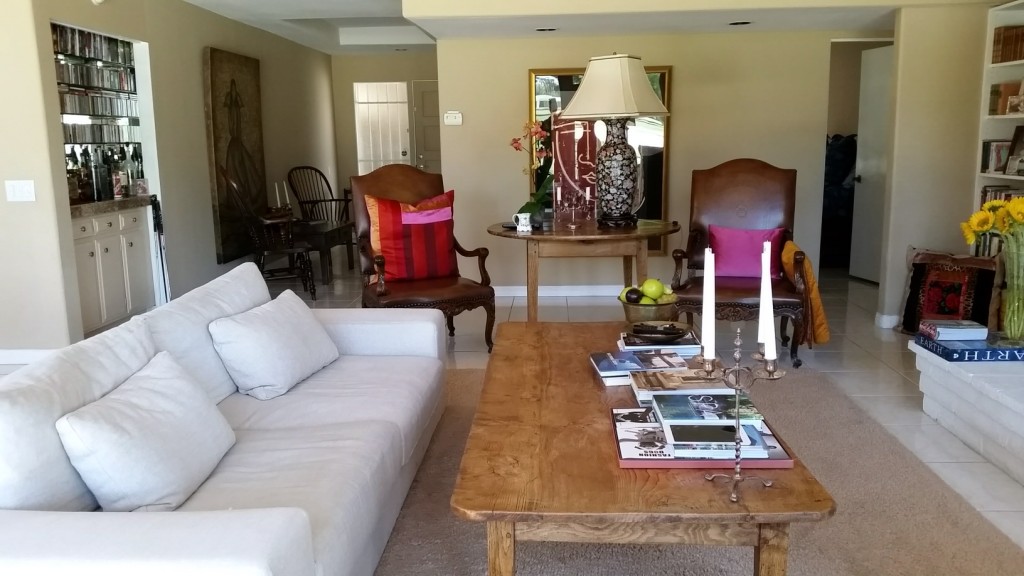 The Livingroom: “The French Louis XV armchairs I got from the auction house ‘Butterfield & Butterfield’ over 10 years ago in L.A.”

MS: How different is your life here compared to the life you had in hip Los Angeles?
JN: When I came back from a two year stretch on the Mexican island of Cozumel to Los Angeles in 2012, the traffic and smog was just too much. One hour in the car to see a friend for lunch, it made me crazy. So I sold my house in ‘Hidden Hills’ and started the real estate company ‘Modern Properties’ in Palm Springs with a good friend. 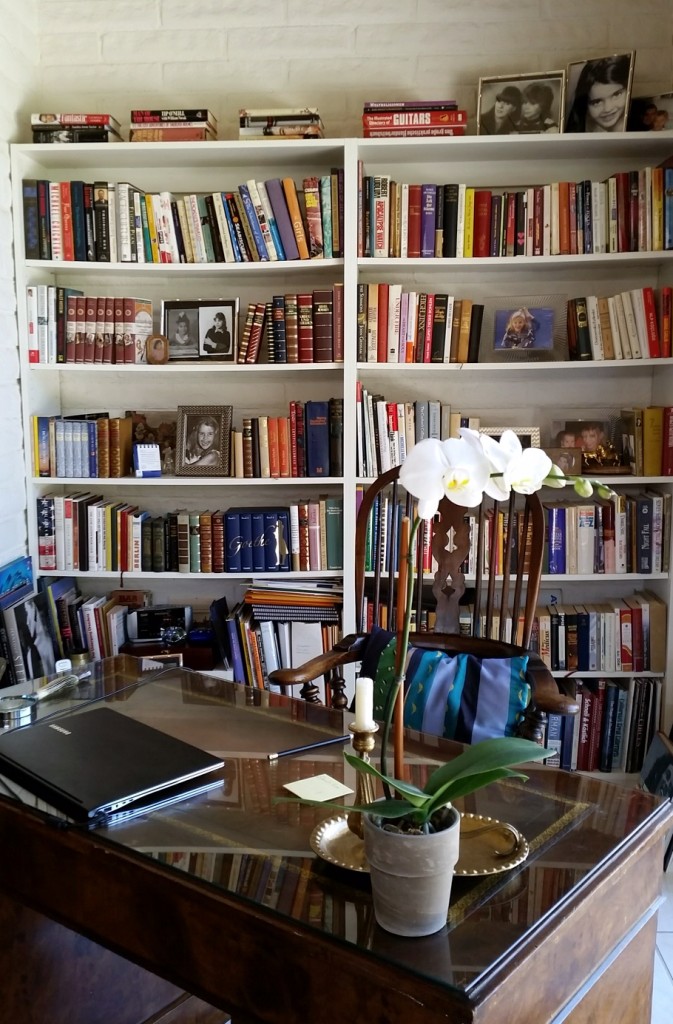 MS: You are a journalist by trade – how did you get the idea to become a real estate broker?
JN: Long ago, when I was looking for a house with my then boyfriend in 1996, I ran into an agent who was not very qualified. So I saw an opportunity. As editor and detail oriented German I always was curious and worked hard. In a short time I got my license and knew my real estate. A license in the US has to be renewed every four years and real estate professionals, especially after the crash in 2008, have to follow tough laws and rules. 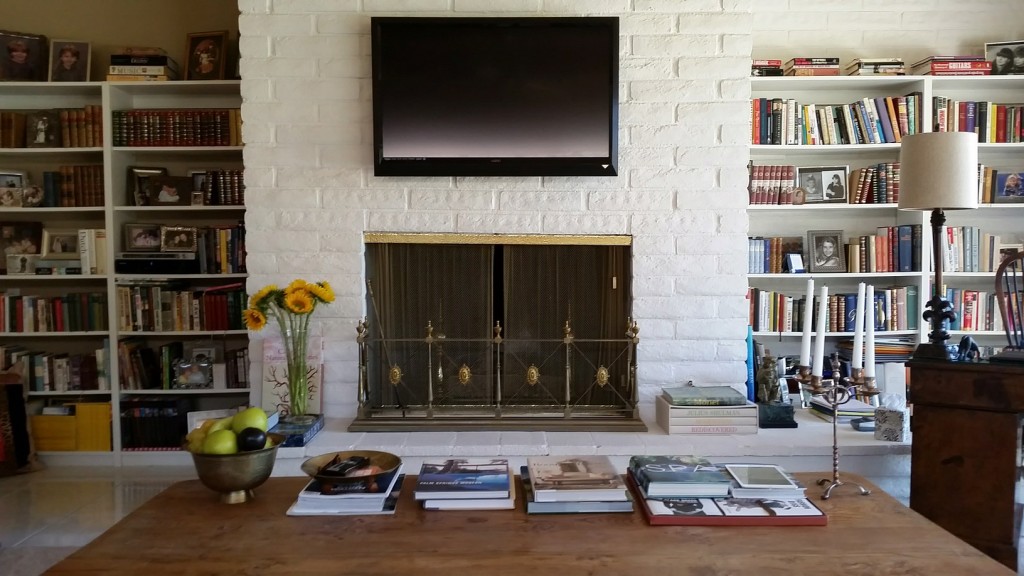 MS: How is the real estate market different than in Germany?
JN: We, in the US have a different mentality when it comes to home ownership. Many Americans move every five years. And since you can write off a big portion or all the interest on a real estate loan from your income taxes, it is also a good investment to own your home. When you have the income, buying is often better than renting. After the 2008 house market crash the prices in California have recovered a lot, also in the desert, which is for many only a vacation home or winter residence. Many Canadians and Europeans buy as if there was no housing crisis. And cash is king. 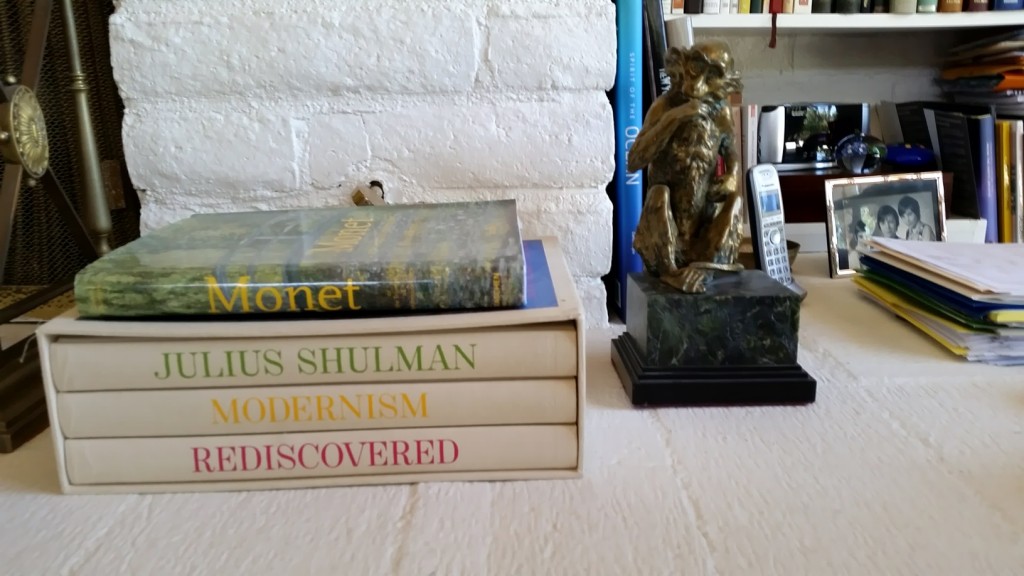 MS: You must have had some interesting encounters in your 18 years as an agent?
JN: Sure, from the NVA-Uniform, the East German Military, in a closet of a client on ‘Mulholland Drive’ in L.A. and the acompanying German Shepard to Marilyn Manson with no makeup. Last week I showed a client the 1925 built love-nest of Carole Lombard und Clark Gable, that is now owned by the Douglas family. Amusing is also the story of Max Hushahn, a German who has been in L.A. forever. He owns the best Harley Davidson shop. I found him a property on Santa Monica Boulevard. When he built his project, he was required to have 19 parking spots. In the middle of planning, the city did not want to allow an in- and egress from the lot. Absurd. Was he supposed to fly the cars in by helicopter? In these situations you just have to stay calm. 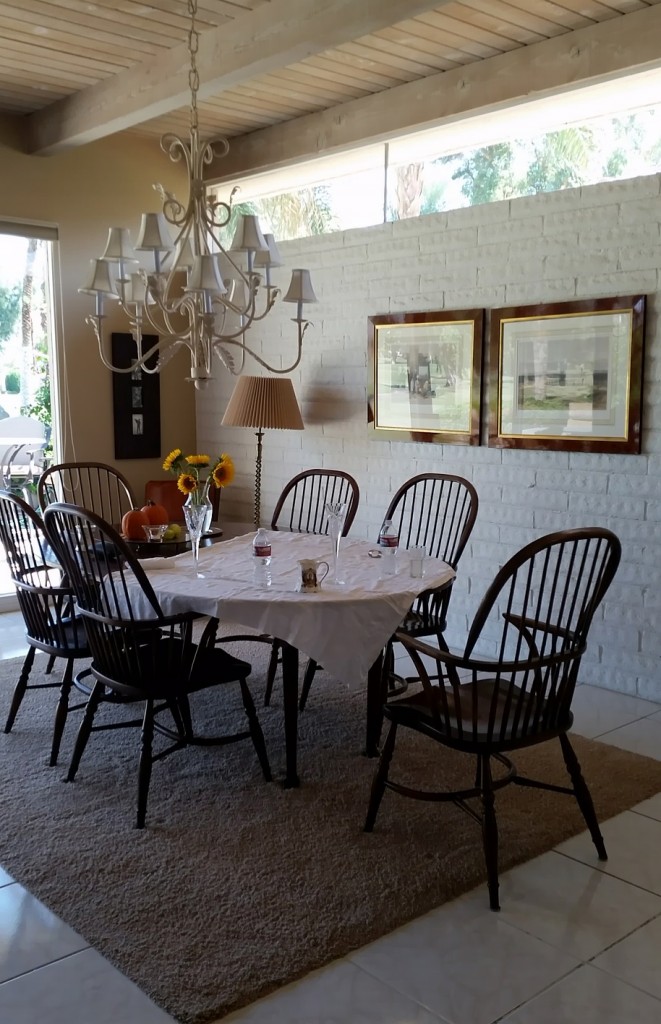 MS: What do you miss in your new homeland?
JN: Totally cliché, German bread. A good Wiener Schnitzel. A traditional christmas market, snow melting on the ground. But most of all my family and friends, my three godchildren. By now I have lived in four countries – if I can say politically incorrect that the former GDR (East Germany) was a separate country – sometimes I feel as if I don’t have roots anywhere. 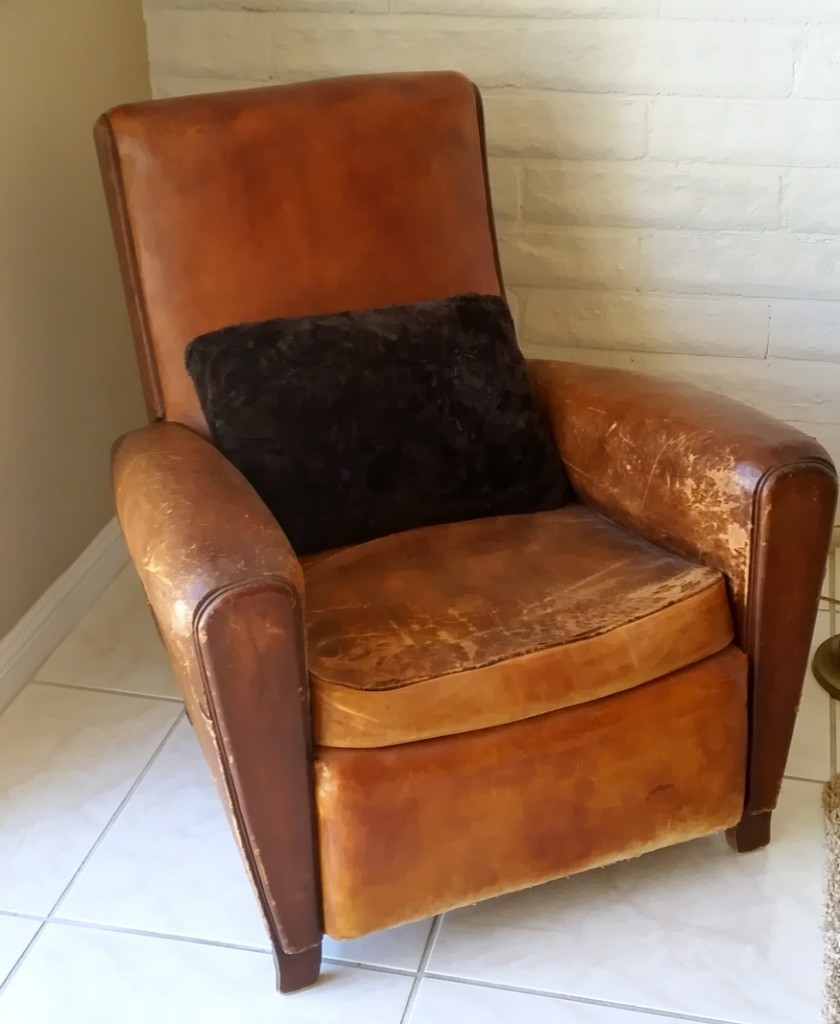 “The French Club Chair from 1920 I bought on the antique market ‘Marché aux Puces’ in Paris,” says Jana Neudeck

MS: Is that one reason some of your furniture and accessories have special meaning?
JN: Exactly. Pieces like the ‘Brass Monkey on marble’, which I found in England. I also bought my restored antique pedestal desk there, which I use daily. The French Louis XV armchairs I got from the auction house ‘Butterfield & Butterfield’ over 10 years ago in LA. A bronze Victorian fireplace fender I couldn’t resist buying in one of my favorite little stores named No.19 in Notting Hill, London. I would not want to part from those, they hold memories.  BvH 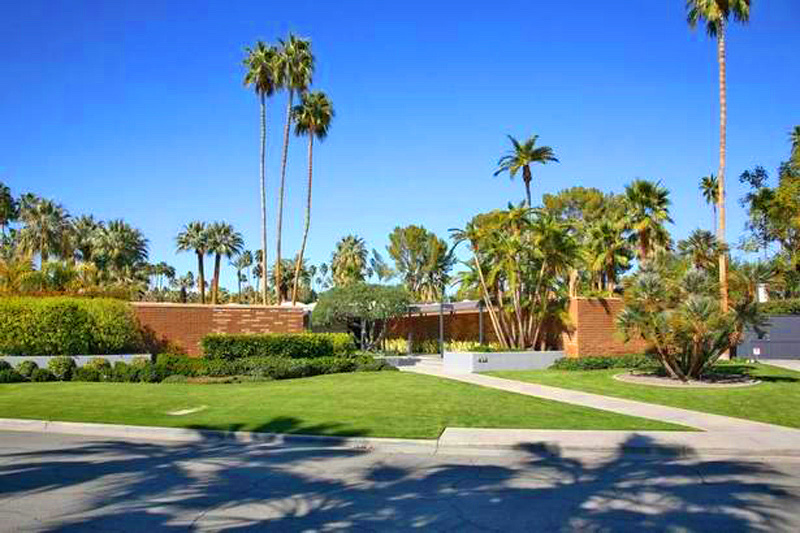 Hi Leo! Actor Leonardo DiCaprio moved into this fabulous villa one year ago. The Hollywood star bought the property, which is located in the old part of Palm Springs, for 5.2 million US Dollars 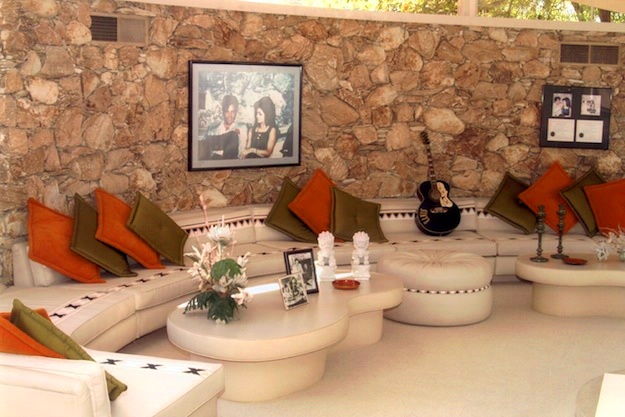 Alexander Estate: The so-called ‘house of tomorrow’ was the honeymoon residence of Elvis Presley and his wife Priscilla. Even today, images and accessories remind of the King of Rock’n’Roll 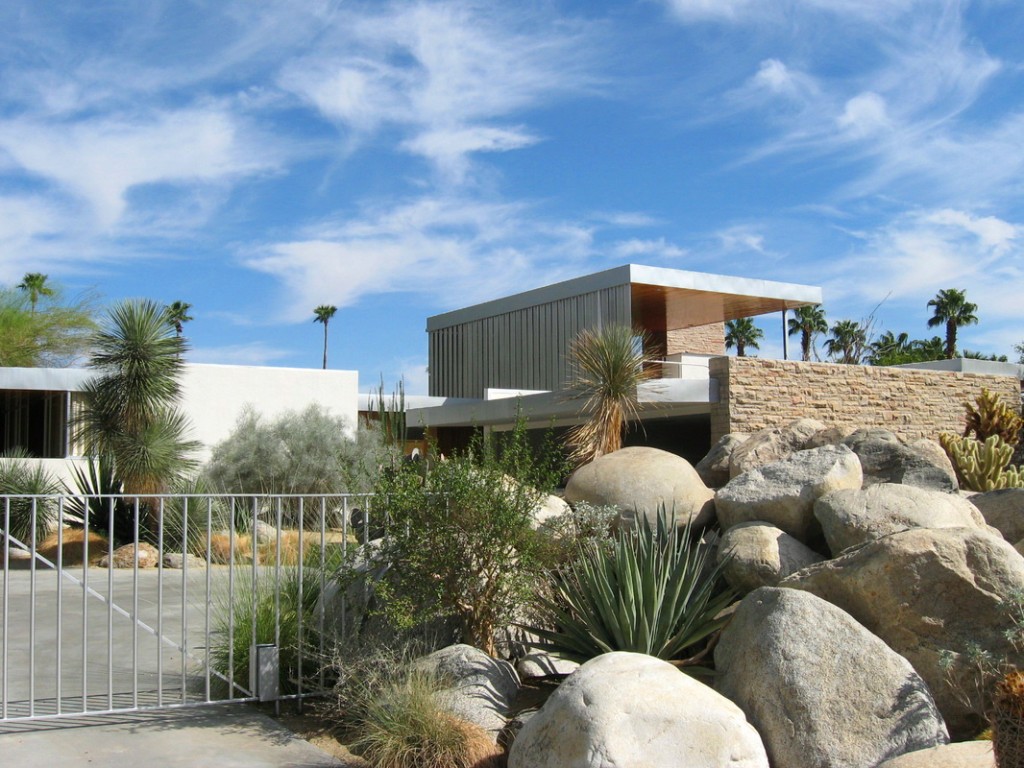 Richard Neutra designed the ‘Kaufman House’ in 1947. It is one of the sought-after and therefore one of the most expensive architectural monuments in Palm Springs 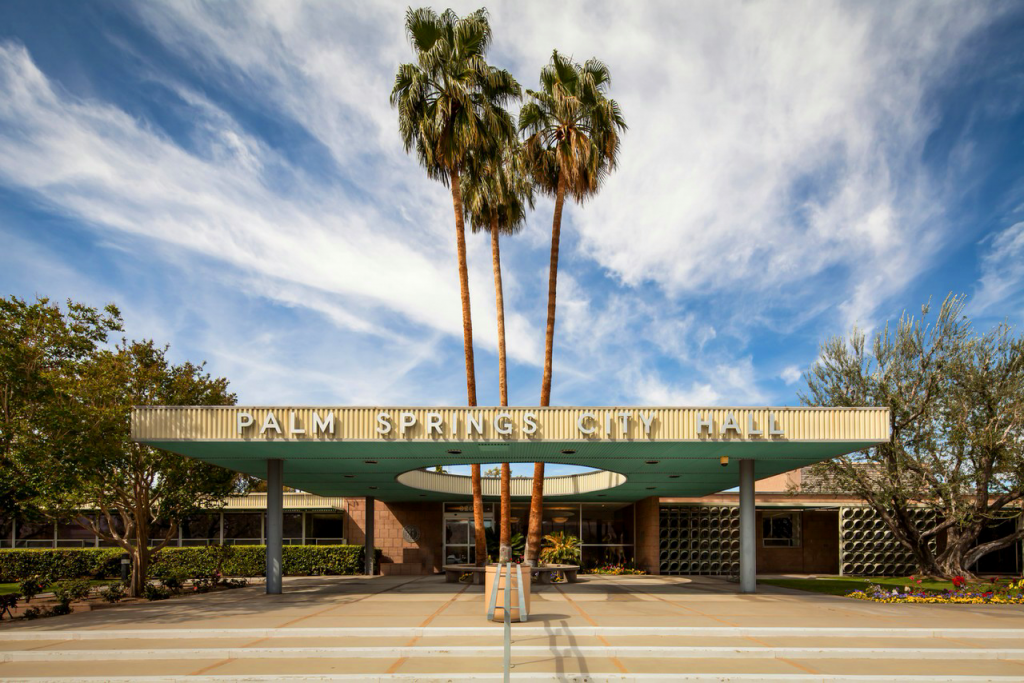 Today a monument: The former town hall of Palm Springs 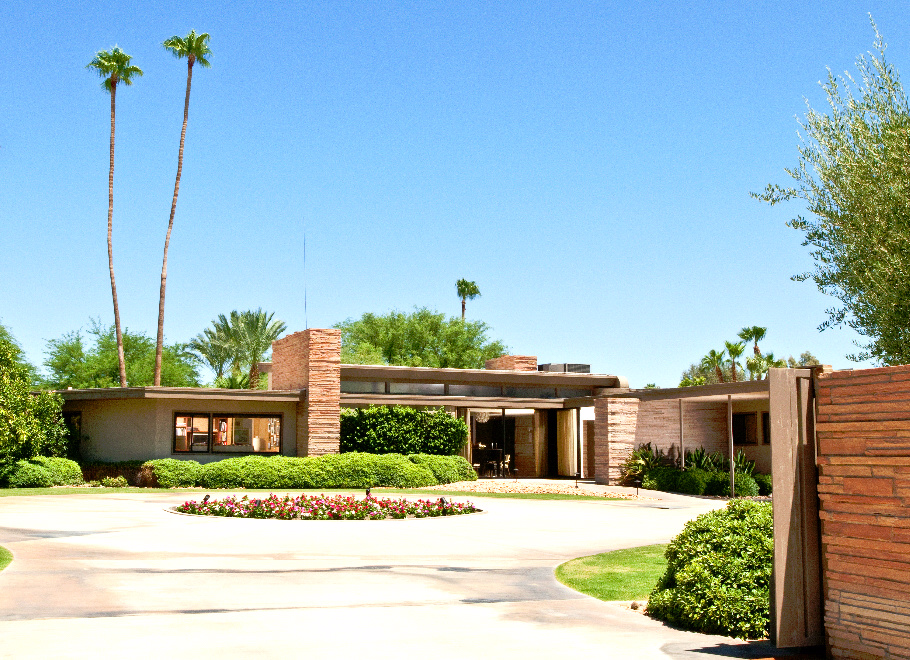 ‘Twin Palms House’ by Stewart Williams: Here the US actor Frank Sinatra lived with his wife, the Hollywood star Ava Gardner in the 1940s 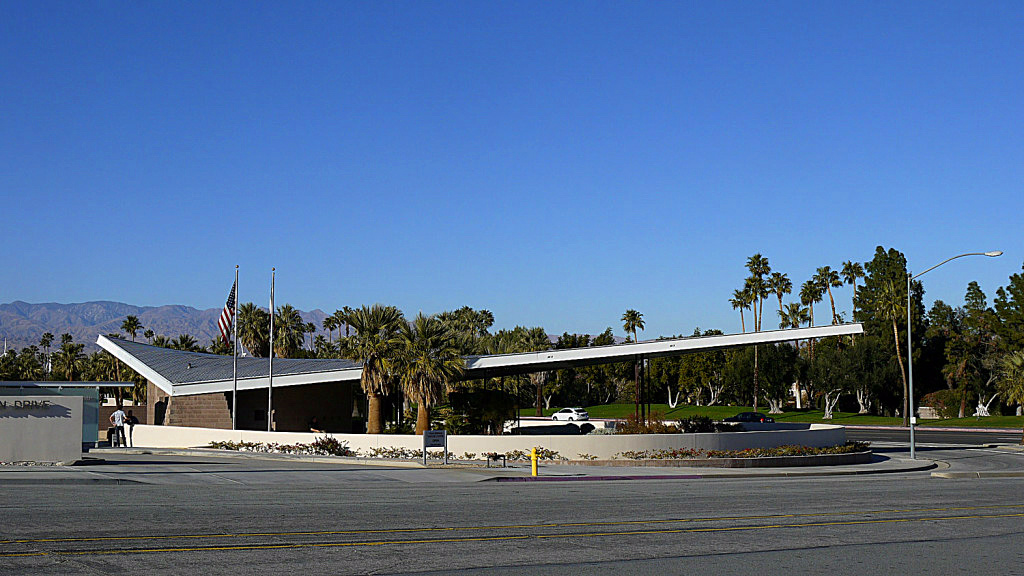 Formerly a gas station, today it is the Visitor Center of Palm Springs: ‘AM’ by Albert Frey 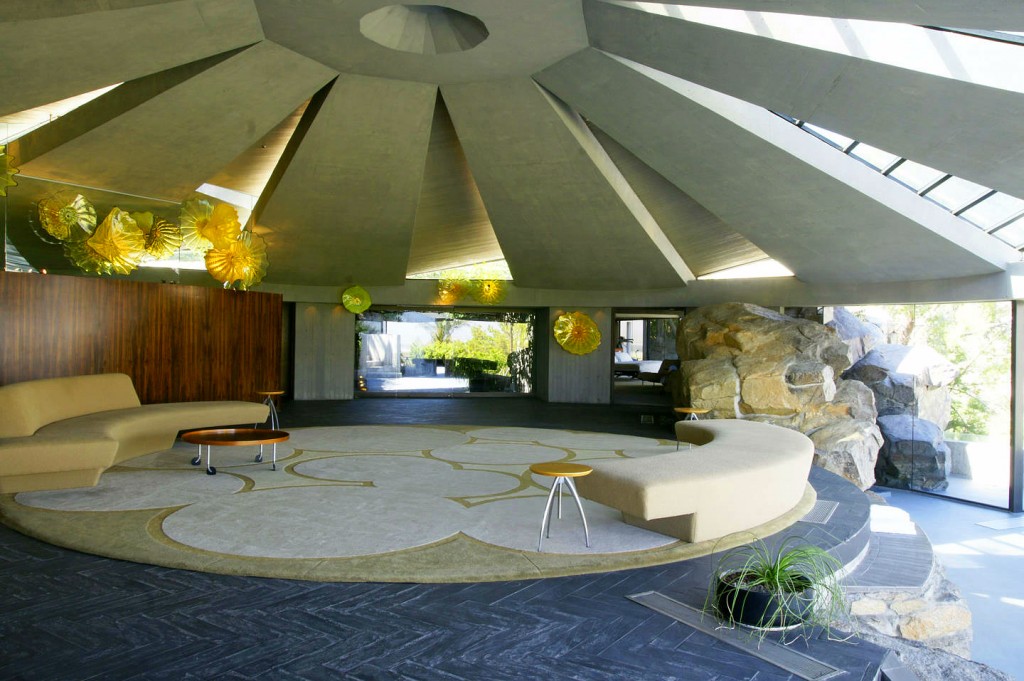 The ‘Elrod House’ by John Lautner: In 1968 this futuristic architecture design used to be a film set for the James Bond movie “Diamonds are forever” 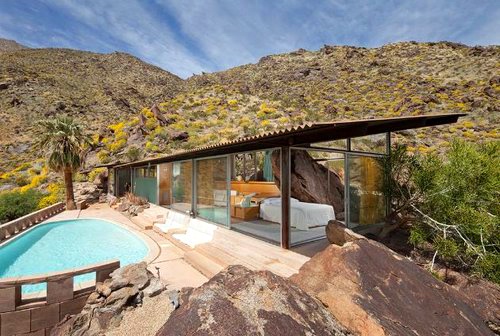 Villa with a view: The Swiss architect Albert Frey built the fully glazed ‘House II’ in the mountains of San Jacinto in 1964