What: My personal favourits for sightseeing and more in the Saxon metropolis
Where: Leipzig, Germany 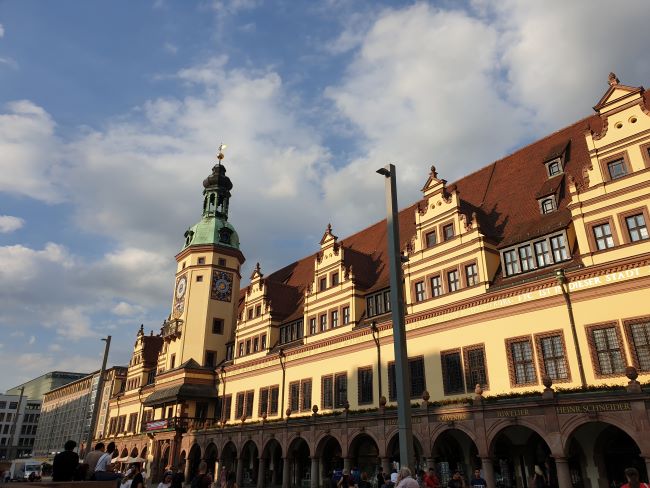 Just marvellous! The old town hall is an example of the Renaissance architecture in downtown Leipzig. The two-story building dates from 1556

Have you ever been to Leipzig? No? Then let’s go! My last visit to the Saxon metropolis felt like forever ago. I was all the more enthusiastic when I visited Leipzig last year for the annual Bach Festival, which unfortunately had to be canceled this summer due to the corona* virus. Leipzig is cultural, green and diverse. 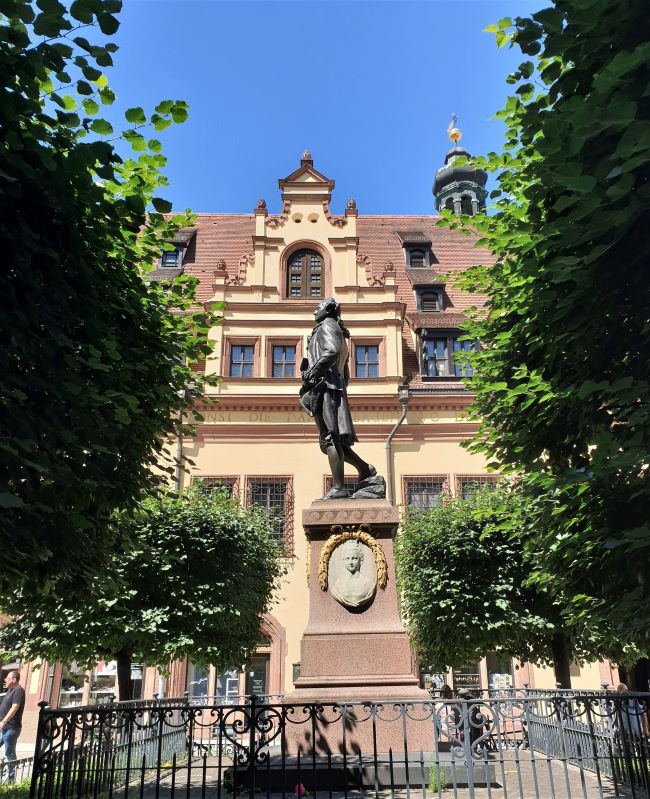 “I praise my Leipzig! It’s a little Paris and educates its people,” said Johann Wolfgang von Goethe, who studied law in Leipzig for almost three years, which the Goethe monument on the Naschmarkt in front of the Old Trade Exchange reminds of

“Why look so far afield? Look, the good is so close by” once already knew Johann Wolfgang von Goethe, Germany’s great poet and thinker. As a law student, he only spent three years here, but Leipzig inspired him to write the great tragedy “Faust”. Goethe’s favorite bar was “Auerbachs Keller”, where “Leipziger Allerlei” is still served today according to the original recipe. The legendary cellar restaurant is also a popular destination for large tour groups. I prefer restaurants where you can meet people that actually come from Leipzig. 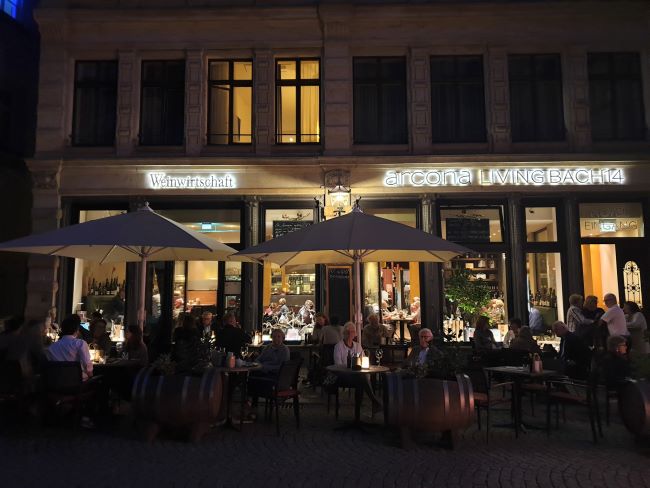 My fav restaurant in Leipzig? The “Weinwirtschaft” at the Thomaskirchhof

For example, the “Weinwirtschaft” at the Thomaskirchhof. I order a delicious tarte flambée with rocket and mozzarella (16 euros) and enjoy the view of the Romanesque-neo-Gothic St. Thomas Church. It is famous for the St. Thomas’ Choir and its former cantor and composer Johann Sebastian Bach. Concert tip: the world-class choir rehearses Bach motets on Fridays at 6 p.m. and Saturdays at 3 p.m. (admission: two euros).* 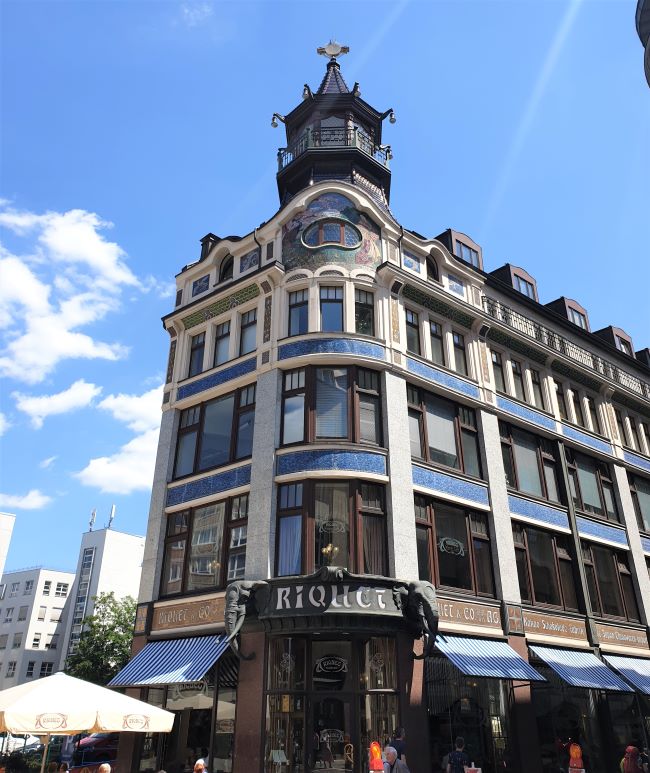 Elephants adorn the entrance portal of one of the most beautiful cafés in Leipzig: The Riquet coffee house was built in 1908 and, with the chosen stylistic elements, is a reminder of the company’s long history of trading with Asia and the Orient

Leipzig’s coffee house culture is legendary. Make sure to try the “Leipziger Lerchen” – a shortcrust pastry filled with strawberry jam or marzipan – in the “Kandler” café. Once invented as a substitute for lark-pie after the hunting of songbirds was banned in 1876. My favorite is the traditional “Riquet” coffee house with an entrance portal flanked by monumental stone elephants. Under heavy Wilhelminian style beams and golden Art Déco chandeliers, a nice waitress serves me the best ice chocolate with freshly whipped cream (4.30 euros). By the way, the service is extremely attentive and friendly everywhere in Leipzig. A boon if you are used to the gruff tone in Berlin. 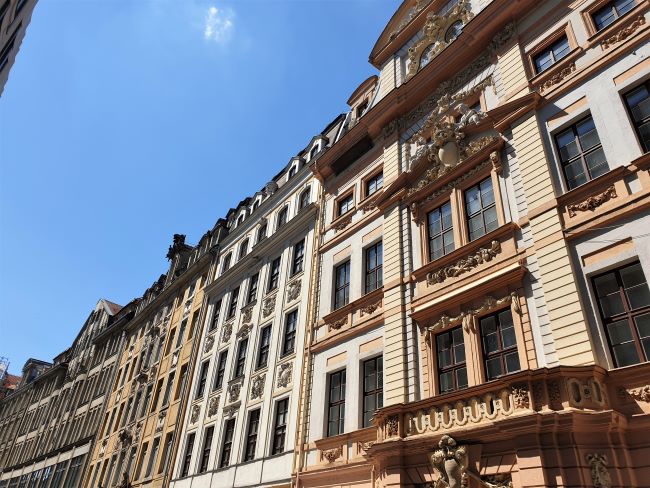 The Katharinenstraße, a beautiful example of the carefully renovated old town

It is the carefully renovated old town that enchants you with its lush Art Nouveau facades, the classicist sandstone architecture and the city palace in the finest baroque style. Culture and shopping can be optimally combined here, because many of the sightseeing highlights such as the Old Town Hall and the Stock Exchange are in the immediate vicinity of shopping streets such as Grimmaische Strasse or the elegant Mädler-Passage. Its builder, the suitcase manufacturer Anton Mädler, wanted to bring the Milanese elegance of the “Galleria Vittorio Emanuele” to Leipzig in 1912. I stroll on through the Specks Hof passage, admire the three glass-roofed inner courtyards and marvel at the Barthels-, Webers- and Jäger-courtyards, which are decorated with stucco and bay windows and which can be reached via Hainstrasse. 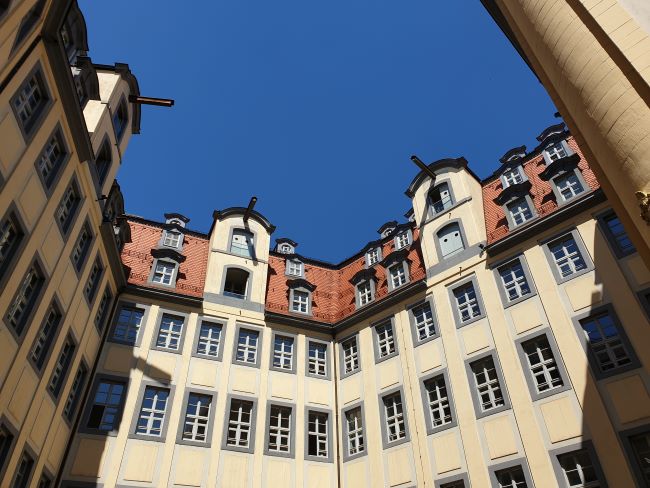 The best panoramic view of Leipzig is from the roof terrace of the 142 meter high city tower on Augustusplatz (entrance fee three euros). Classical fans should not miss a visit to the Leipzig Opera House and the Gewandhaus, whose famous conductors were once Felix Mendelsohn Bartholdy and Kurt Masur. You can also enjoy a wonderful view from the Völkerschlachtdenkmal, the “Völki”, which at 91 meters is one of the highest monuments in Europe. 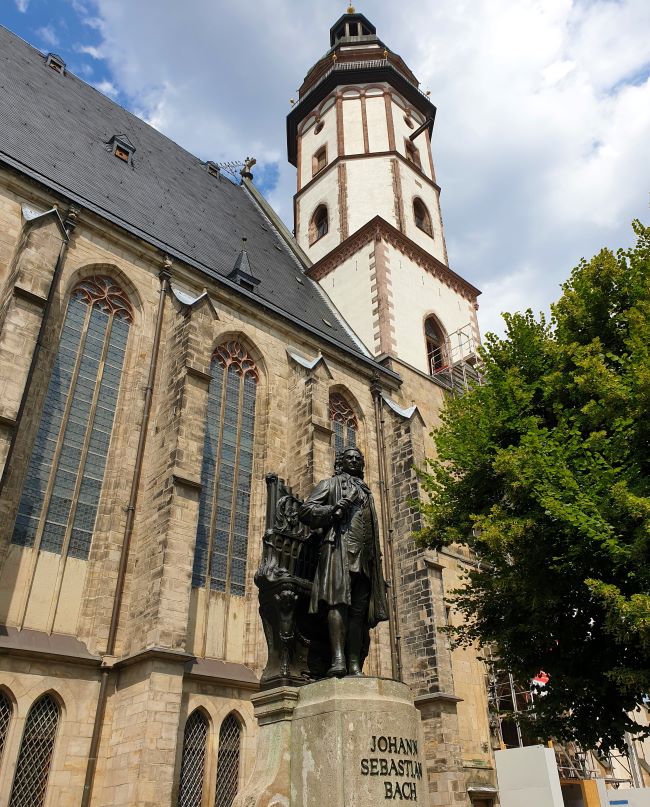 Johann Sebastian Bach – here infront of the Thomanerkirche – was organist, conductor, composer and choir director in Leipzig for 27 years

If you want to relax now, you can rent a boat at the city harbor and paddle down the Karl-Heine-Canal: Moor in the Café “Kanal 28” and enjoy the allotment garden atmosphere right by the water. The White Elster, Elsterflutgraben and Elstermühlgraben can also be explored by boat. 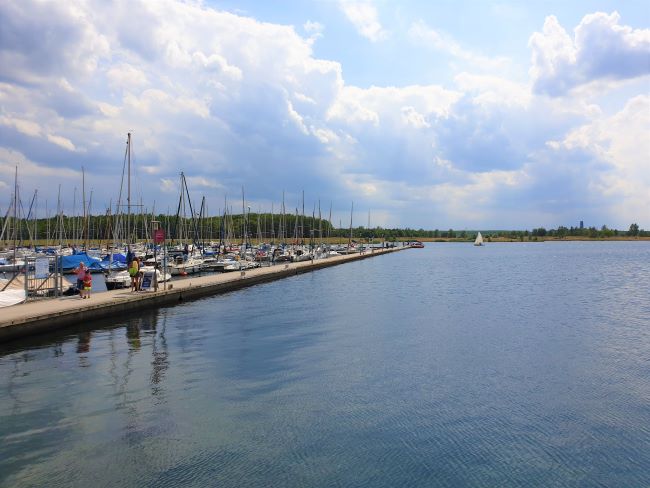 Excursion destination Cospudener See: I take a taxi (approx. 25 euros from the city center) through the elegant villa suburb of Markkleeberg. After 15 minutes by car, I reach the wonderful, albeit artificial, reserve, which was once built on a former open-cast mine

Where dreary open-cast lignite mining once dominated the landscape (and the environment), Leipzig’s local recreation area with a unique lake landscape emerged 20 years ago, some of which lead through canals into the city. At the end of “Pier 1” lies the “Sole mio Seeterrassen” restaurant with a panoramic view of the water. The sea bream with grilled vegetables (20 euros) is delicious and the view of the marina, beach, surf school and excursion boat is picturesque. (Bus routes 65 and 79, May to September). 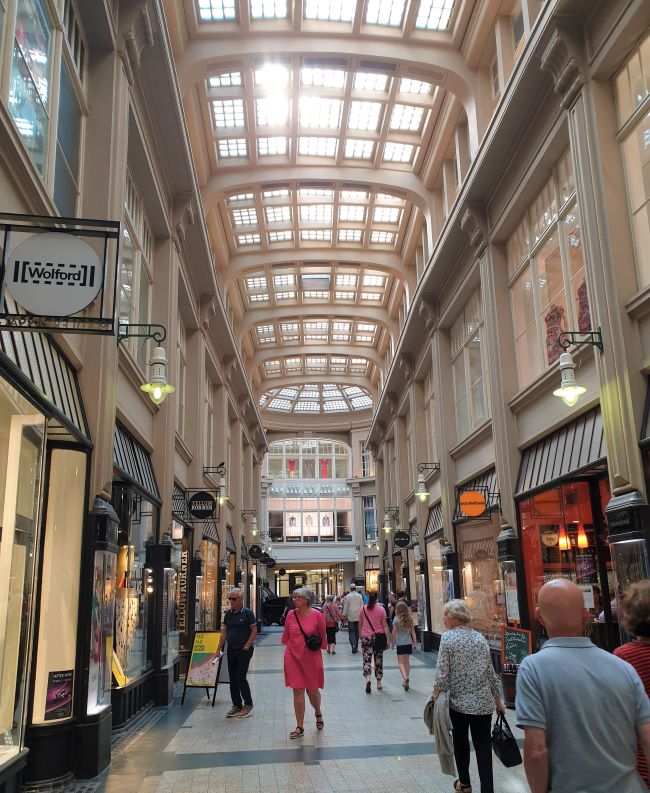 Chic shopping in the Mädler-Passage

And where is the charm of the unfinished? For example in Plagwitz and in Lindenau, west of Leipzig. North of Karl-Heine-Strasse, dusty shops are being cleared, cafes opened and community gardens weeded. Further south, an artist center with galleries has been established in a former cotton mill. The Südstadt with Karl-Liebknecht-Straße is a popular trendy district. There is a little GDR nostalgia over the “KarLi” and yet more multicultural in pubs, cafes and restaurants. Open-air theater and summer cinema take place on the site of the former VEB Feinkost. And with “Mrs. Hippie”, the iconic fashion label founded in 1993, offers colorful fashion made in Leipzig. 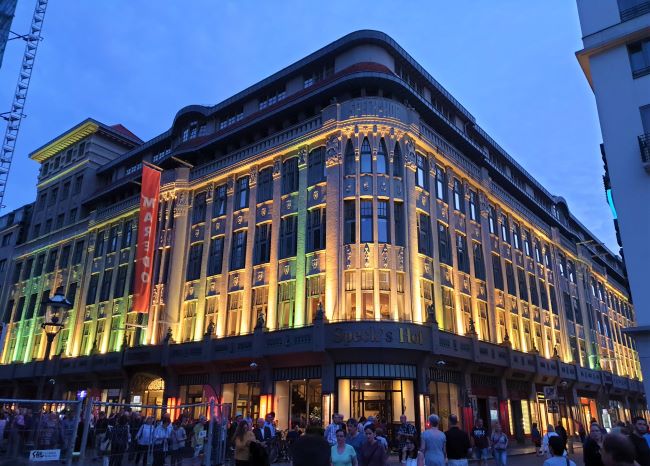 Leipzig by night: In the evening, the historic facades of the city center are staged

Back in the center I bypass the “Drallewatsch” (Saxon for “to go around the houses”), popular with tourists, with its restaurants and bars around the Barfußgässchen. Instead, I have a nightcap in the hotel bar of the “Motel One” (double room from 84 euros) and look at the Nikolaikirche. It is not only the largest church in Leipzig, it is the birthplace of the peaceful revolution at the time of the historic turning autumn of 1989. I toast to that.  BvH 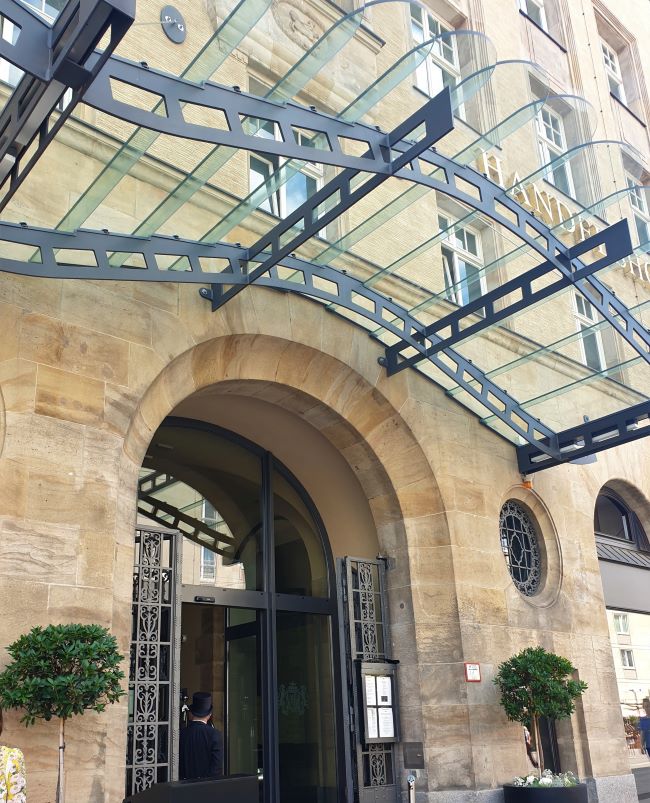 The luxury Steigenberger Grand Hotel with a very good bar and the Brasserie Le Grand, where the guest can choose between menus and à la carte dishes, has resided in the former trade fair building of the craftsmen. The kitchen, under the direction of chef Sandy Bohm, is rightly award-winning: my beef tartare (19.90 euros) and the boullaibaise (14 euros) were excellent 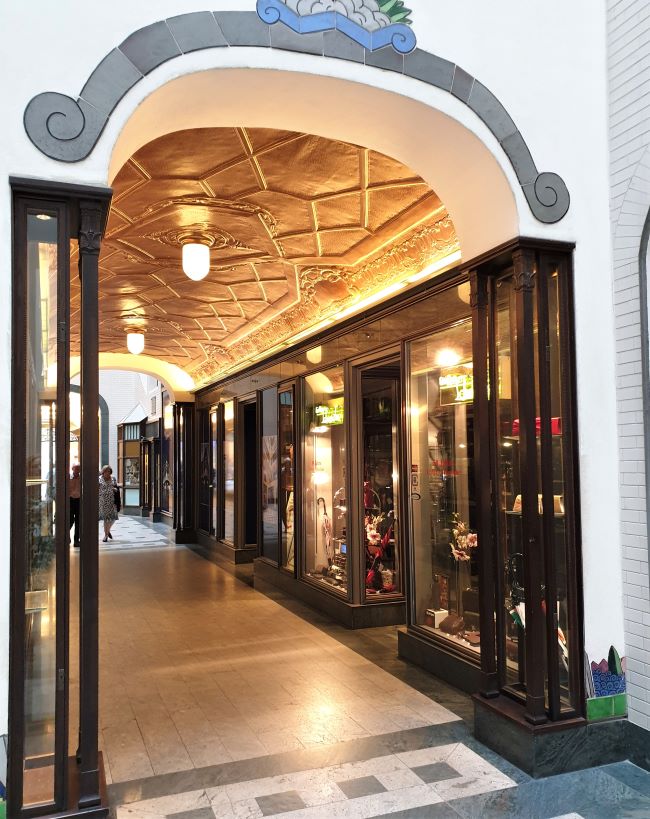 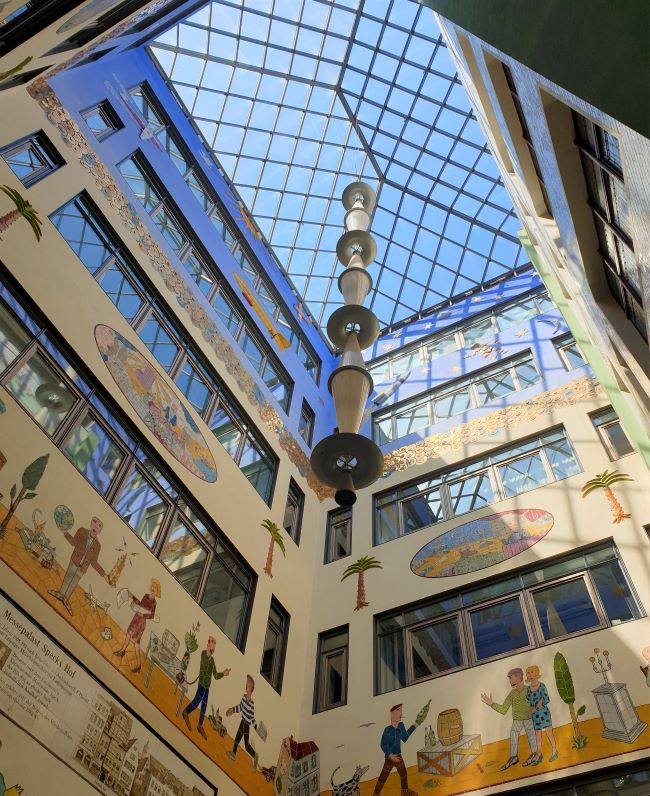 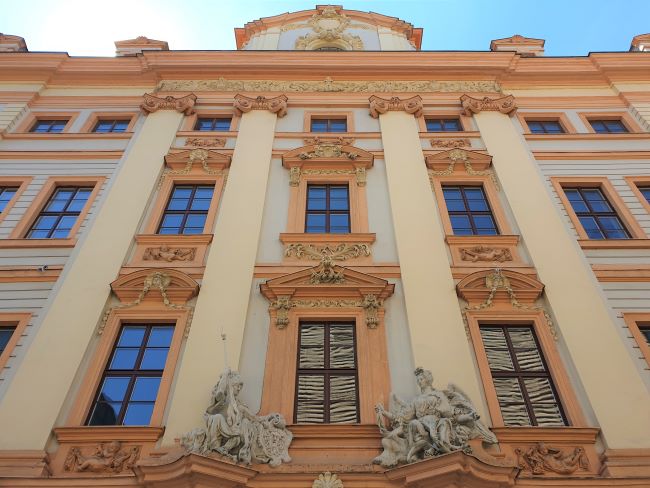 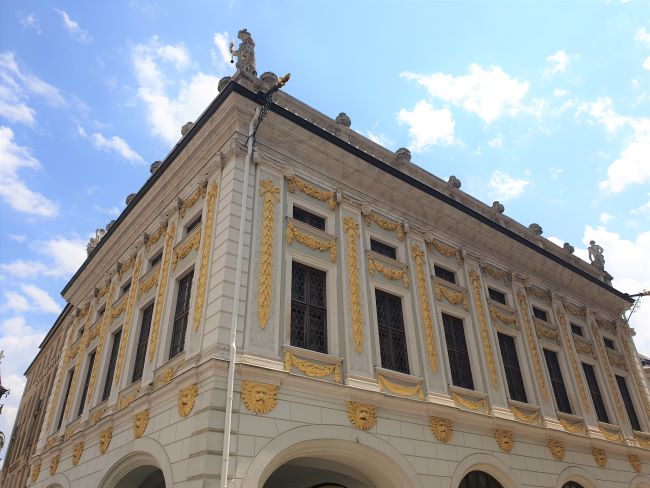 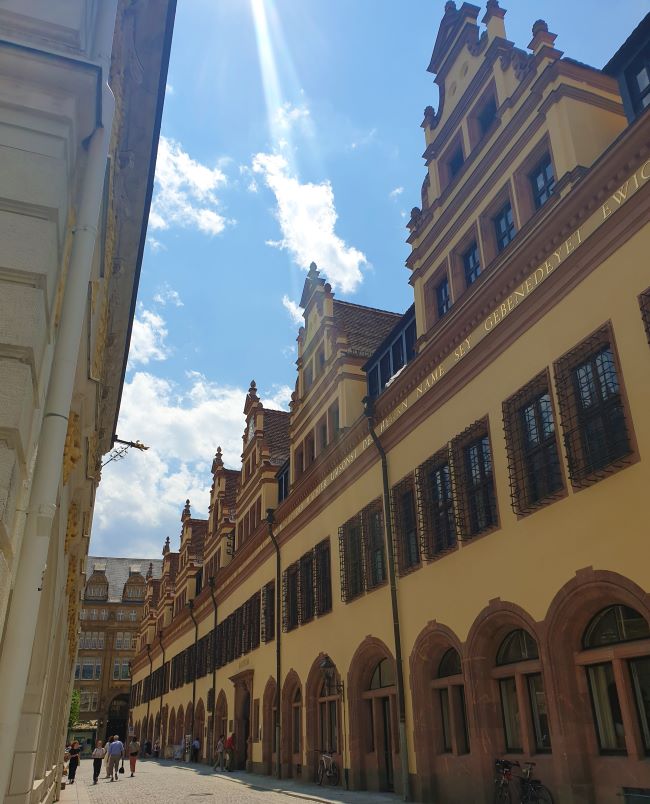 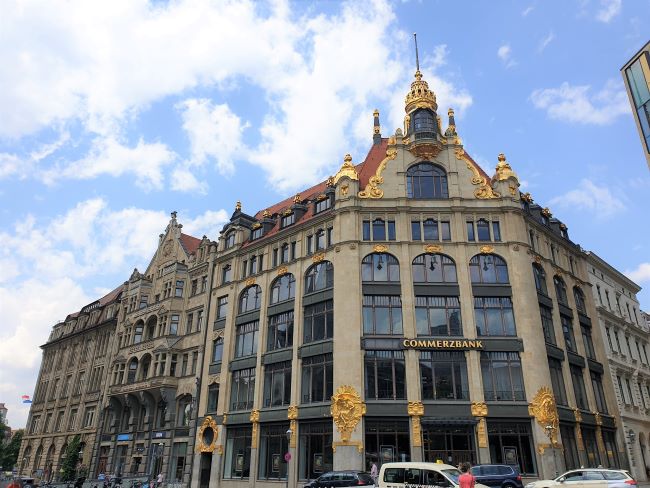 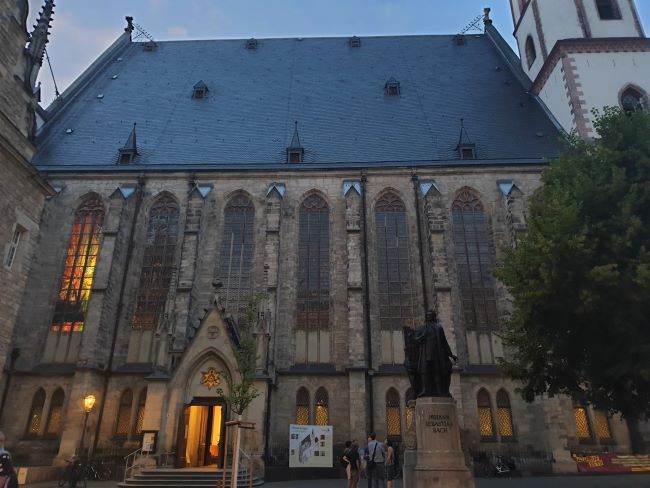 The illuminated Thomaskirche before the concert started 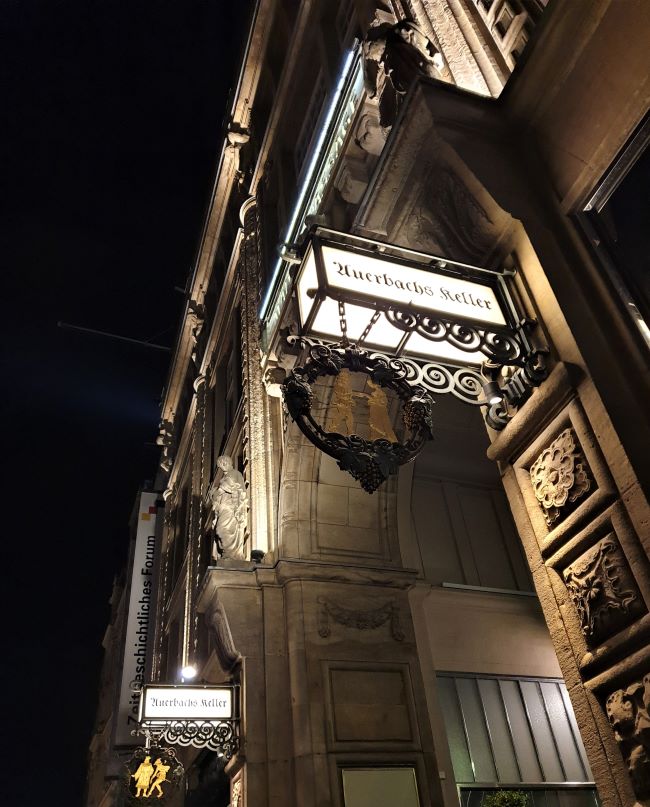 In Leipzig, Goethe collected the first ideas for his drama “Faust” and with his poetry also set a monument for the “Auerbachs Keller” – a locality where he liked to drink 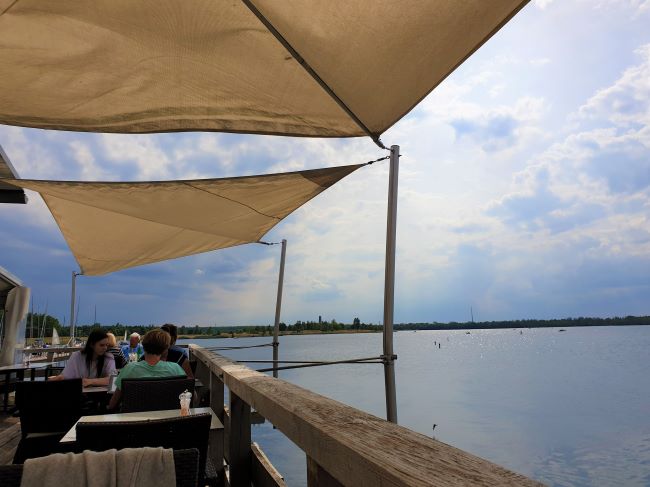 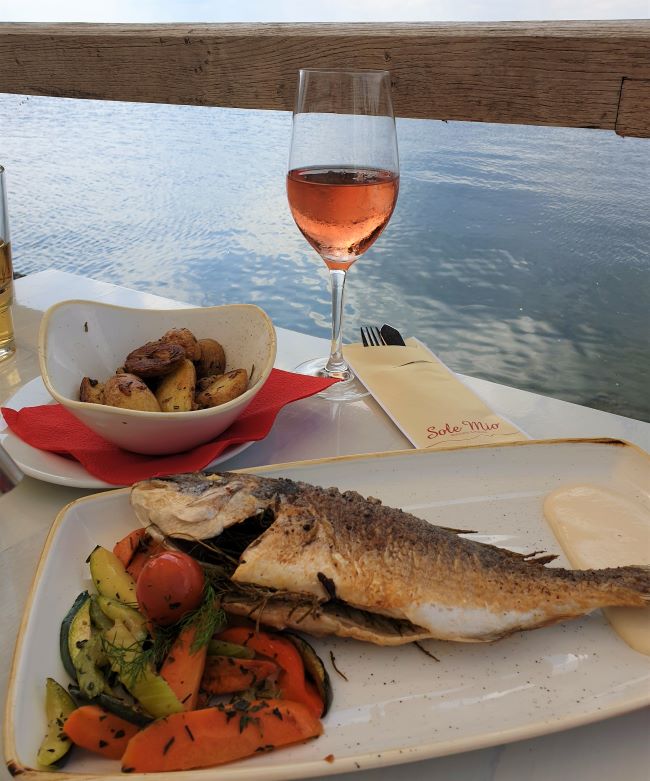 Tip: The sea bream with grilled vegetables (20 euros) is delicious

Food: “Café Barbakane” on the historic city fortifications in the Moritzbastei (minced meat pan with vegetables and potatoes 6.80 euros).

Getting there: For example, from Berlin 1 hour by train (2nd class from 60 euros)

Sightseeing: Hop-on, hop-off, 2-hour city tour through Leipzig, the important sights at ten stops, get on and off as you like (from 15 euros)

* The opening times, prices, etc. mentioned here may have been restricted or changed due to the measures currently required during the corona pandemic.

Savoir Vivre in the Loire Valley
What: A weekend in French Castles Where: Loire Valley, France…

A perfect day in Vienna II
What: Christmas Season in Vienna Where: Vienna, Austria There’s nothing…
There is 1 comment for this article